12 Most Expensive Sapphires Ever Sold

Sapphire is a variety of Corundum, an aluminum oxide mineral that comes in many colors. It is the redder hues like the purple sapphire that are most desired when it comes to investing in sapphires as a type of gem.

The rarer and more intense the purple hue of a sapphire, the higher its value becomes. The costliest purple sapphires are those with exceptional saturation, clarity, and color.

In auction houses or gemstone shows, prices for these expensive sapphires tend to range from $1,000 per carat up to even $10,000 per carat in some instances. But how much do they cost outside the auction?

Let’s take a look at 12 of the most expensive Sapphires ever sold at auctions around the world.

12. The Queen of Romania Sapphire 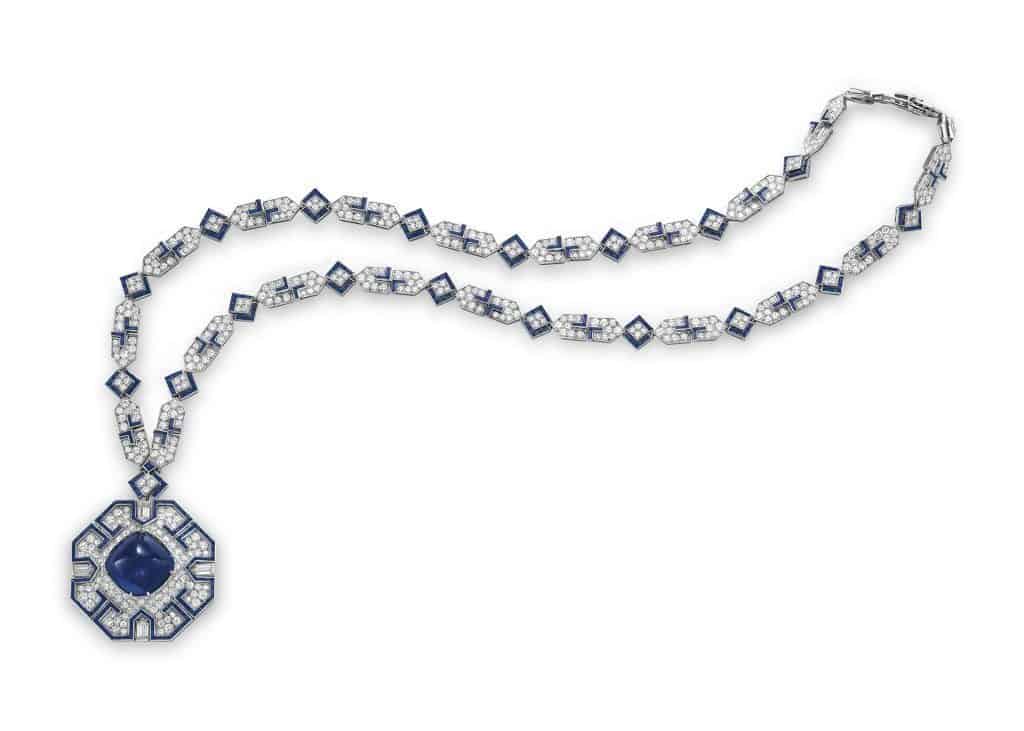 The famed Queen Marie, the granddaughter of Queen Victoria of Great Britain and Czar Alexander II of Russia, wore this historic sapphire pendant necklace to her husband King Ferdinand of Romania’s coronation in 1922.

Before it became a part of the Greek royal family’s collection, it was sold to Harry Winston in 1947. 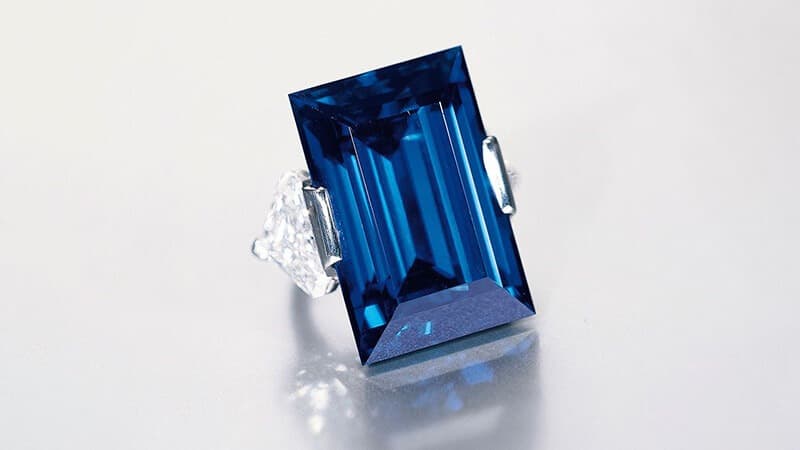 One of the first precious stones to achieve a world record price in the new millennium was the Rockefeller Sapphire. John D. Rockefeller, Jr. acquired it in 1934 from the Nizam of Hyderabad.

The 62.02-carat Burmese Sapphire, one of the finest specimens ever offered at an auction, is truly outstanding and would have drawn considerable attention, but it is the name associated with the stone that makes it much more sought-after. In addition to being exceptional in terms of size, shape, clarity, and color, this rectangular-cut sapphire from Myanmar also has fantastic provenance.

Rockefeller commissioned Pierre Cartier of the eponymous French jewelry house in the 1940s to recut the stone into this distinctive form and mount it for his wife, Abby. 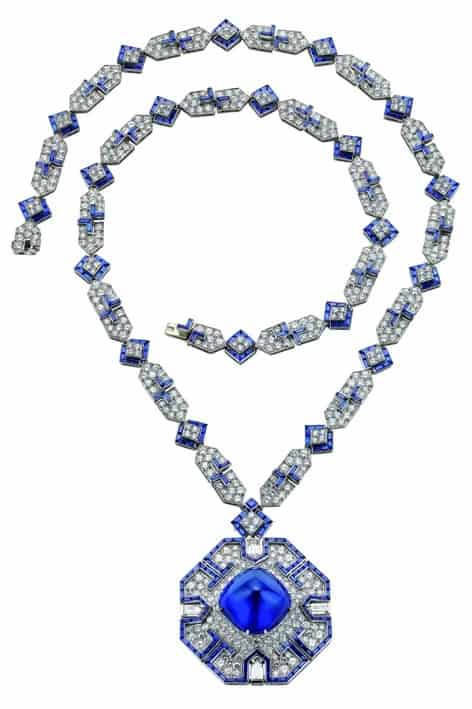 This 52.72 carat, untreated Burmese sapphire, which was sold as a part of one of the most well-known jewelry auctions in history, would have garnered considerably more notice if it weren’t for the world record-breaking emerald that broke records in the same auction.

This amazing gem featured a piece created by the renowned jewelry business Bvlgari and featured Hollywood starlet Elizabeth Taylor, who had one of the best jewelry collections outside of Royalty. This attracted attention from people all around the world.

This gorgeous Sapphire is shaped like a cabochon, which makes it different from every other entry on this list and gives it an even more distinctive appearance. 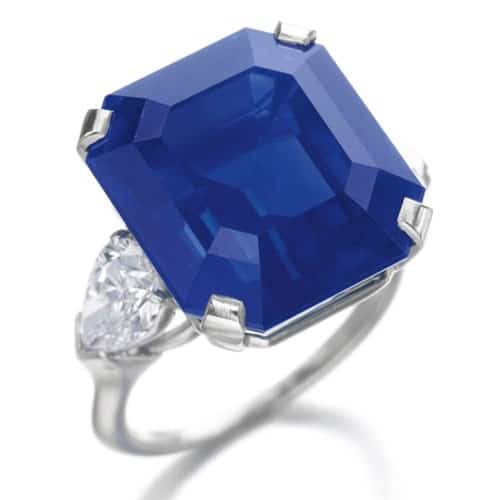 This extraordinary Kashmir Sapphire, which weighs over 27 carats, is untreated, and it is mounted in a simple but elegant mount with two magnificent pear-shaped diamonds by renowned jeweler Graff.

The color of this sapphire is sometimes referred to as “royal blue” in the trade, and it comes with a note in the appendix indicating it has exceptional qualities and deserves special attention. The clarity and color of this sapphire are completely natural because it hasn’t undergone any heat treatment. This size and grade of genuine sapphire from Kashmir are extraordinary and unusual.

The gemstone’s deep blue color, which is poetically referred to as “royal blue,” is the result of a mix of balanced trace elements that are typical of the best sapphires from Mogok, Burma. 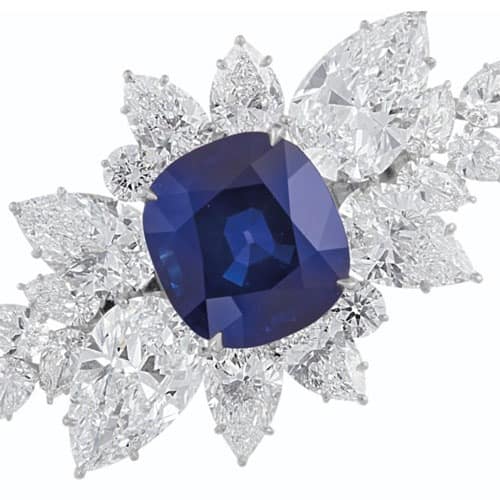 This beautiful Sapphire and Diamond bracelet is one of the most pricey items on this list. The 43.10 carat, “Royal Blue,” untreated Kashmir Blue Sapphire in the center of the ring is more than enough to catch anyone’s eye. A number of reports from the GIA for the diamonds and SSEF, AGL, and Gubelin for the sapphires are included with this bracelet.

While this bracelet may not be the most expensive, it’s certainly one of the most impressive and rarest. It’s our top pick for the best women’s sapphire and diamond bracelets. The large center stone is surrounded by a total of 79 diamonds that weigh approximately 1.61 carats.

Sadly, the listing did not provide any extracts from any of the reports.

7. Sapphire and Diamond Brooch by Cartier 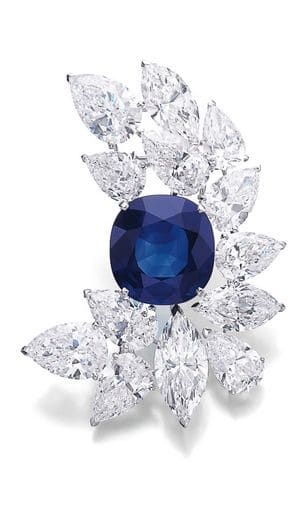 With a cushion-shaped sapphire weighing 30.23 carats and marquise- and pear-shaped diamonds weighing a combined total of about 42.35 carats, the piece is signed by Cartier, numbered, and stamped with the Cartier case number in addition to the French assay and partial maker’s marks in India.

This sapphire’s velvety, intense blue hue is a result of incredibly small, undetectable inclusions and a mix of well-balanced trace elements that are distinctive of and unique to the finest Kashmiri sapphires.

The few minuscule inclusions that were discovered under a microscope are the distinguishing features of sapphires from Kashmir, an isolated region of the Himalayan Mountains in India, which is home to a reputed historic deposit.

6. The Jewel of Kashmir

This 27.68-carat sapphire referred to as the Jewel of Kashmir is something extraordinary and is one of the sought-after gems for many collectors. A “cornflower blue” color is attributed to this sapphire. A delightful velvetiness to the color is imparted by the gentle texturing present in this exquisite gem, which is not so intense as to impair the gem’s transparency.

In addition to a square emerald cut that produces deep internal color reflections and brilliance that compliment the stone’s overall visual appeal, this sapphire’s lovely color is further enhanced by outstanding clarity, which increases the stone’s degree of transparency.

With an exceptional rating from Total Quality Integration, the sapphire got the highest and most prestigious accolade.

It wasn’t set in any jewelry, unlike the other stones on this list. But when this lovely example of a “Royal Blue” Sapphire sold for more than 2.5 times the highest estimate, it exceeded all expectations. and for a brief period held the world record for the highest price ever paid for a single sapphire at auction, but the Richelieu Sapphires would surpass it later in the same auction.

Due to a combination of well-balanced trace elements in the gemstone, which is typical and characteristic of the finest sapphires of Mogok, Burma, it has a saturated blue color that is poetically also referred to as “royal blue.” To best display its color, this sapphire was expertly cut from rough crystal.

Being so uncommon and exceptional, natural sapphire from Burma of this size and quality can be regarded as a true treasure of nature. 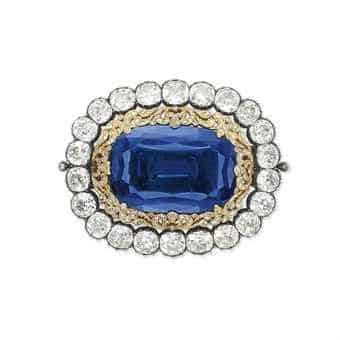 The magnificent 130.50-carat Burmese Sapphire broke the previous record for the cost of blue sapphire in May 2011 by more than $3.5 Million.

The antique design of the brooch also gives it a special charm because, in contrast to many other diamond-set jewelry items, Rose Cuts were chosen, which are not frequently utilized in contemporary jewelry designs. This sapphire exhibits exceptional purity, and its saturated blue color, which is poetically referred to as “royal blue,” is caused by a combination of well-balanced trace elements in the stone.

This stone features a typical characteristic of the finest sapphires of the Mogok gemstone tract.

3. A Unique Sapphire and Diamond Ring 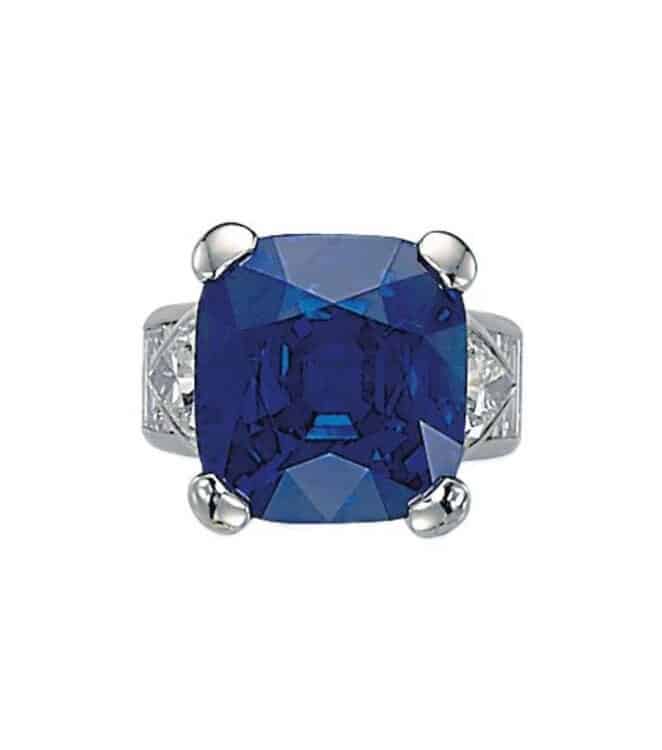 Unfortunately, the name of this exceptional Kashmir sapphire has not been revealed, which is regrettable because it deserves to be honored alongside the Jewel of Kashmir and the Star of Kashmir sapphires. This 35.09-carat untreated stone, which has the highly sought-after “Royal Blue” or “Cornflower Blue,” is one of the finest Kashmir Sapphires.

Although it didn’t break any records, it was the most costly Kashmir Sapphire ever sold at auction. To the triangular-cut diamond shoulders and baguette-cut diamond hoop, mounted in gold, is a cushion-shaped sapphire weighing approximately 35.09 carats.

The ring size of this unnamed jewelry is 4 1/2. 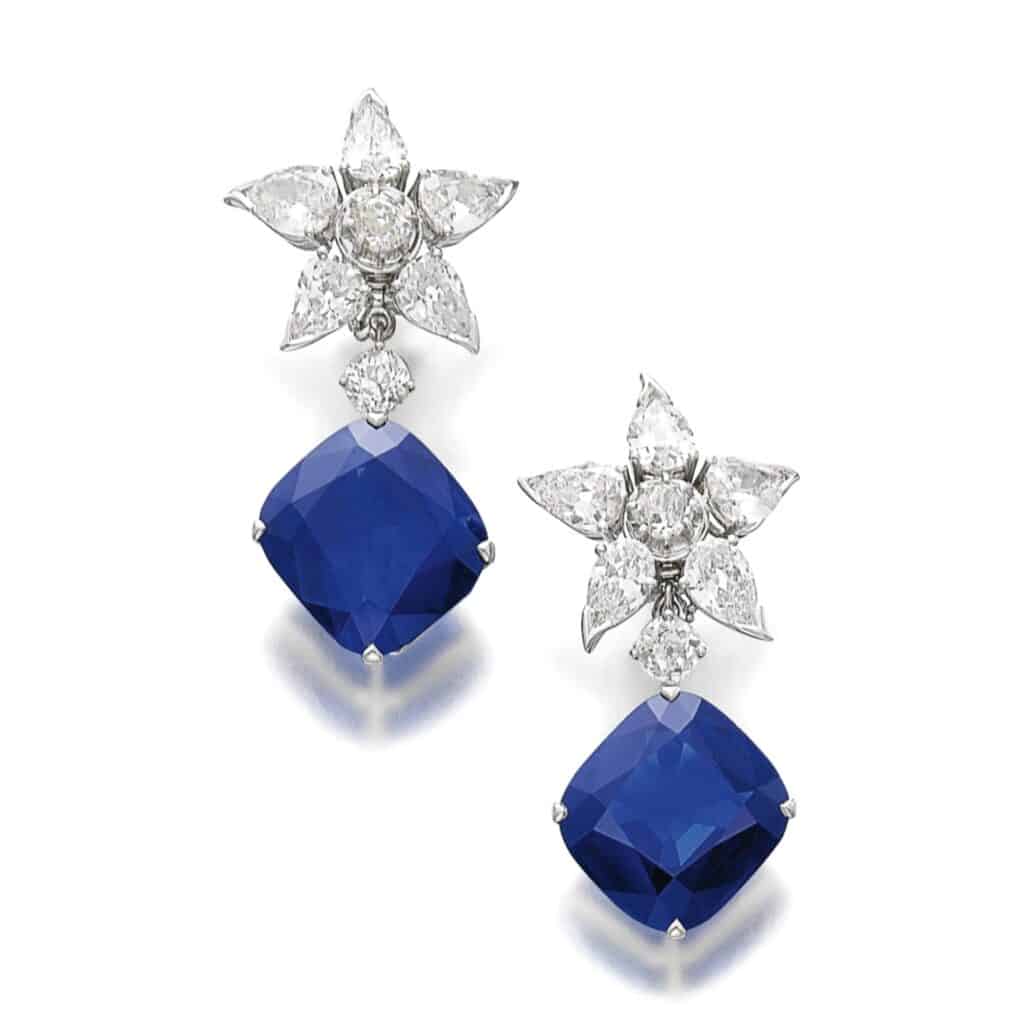 Even while having matching 20+ carat, untreated Kashmir sapphires are not entirely conceivable, it is rare in good gem quality sapphires. This is part of the reason why they established a world record price in 2013.

The sapphires are genuinely remarkable, and their combination of Kashmir provenance, matching cut, size, and deep blue color makes them among the best pairs of sapphires to ever go up for auction.

They are also the most costly earrings made out of colored gemstones at the time this post was written.

1. The Blue Belle of Asia 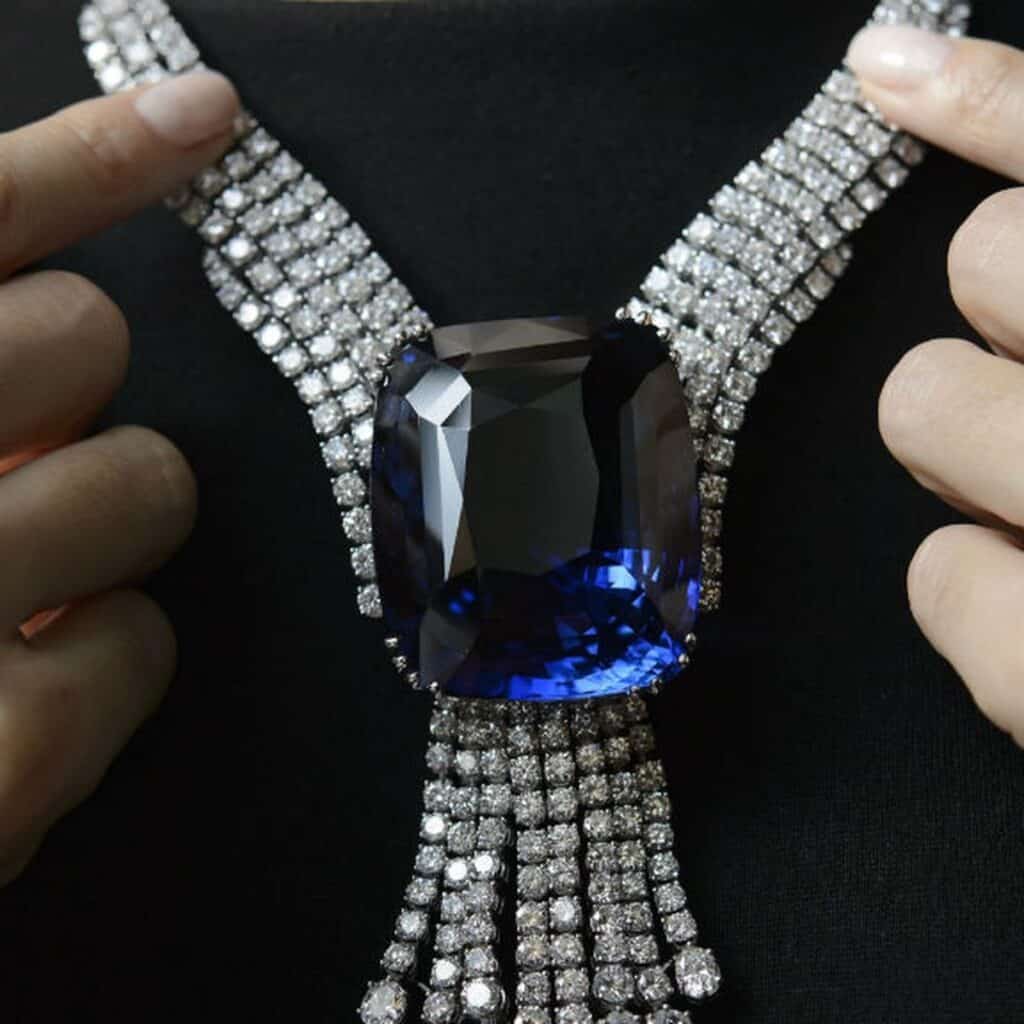 Considered one of the biggest and most expensive blue sapphires ever discovered, the Blue Belle of Asia is a cushion-shaped Cylon Sapphire that weighs about 392.52 carats. It is placed on a diamond and white gold necklace and hangs from a brilliant-cut diamond tassel pendant.

Although articles with gemstones above 100 carats frequently highlight them, it is quite challenging to find analogies for this sapphire due to its size and quality. The auction was attended by passionate private collectors and professional merchants, mostly from the Middle East, and was highly sought due to the depths of its alluring deep blue prism, which is enough to catch anyone’s attention.

Originally, Queen Elizabeth—the wife of King George VI and mother of Queen Elizabeth II—was to receive the sapphire on the day of her coronation in May 1937.