8 Most Expensive Pieces of Jewelry Ever Sold

The world’s most expensive jewelry is often very old, being sourced from venerated mines in Africa, India, and the Middle East, cut from famous stones into flawless forms. However, other pieces combine hundreds of diamonds into an artistic jewelry sculpture. The most expensive either combine numerous stones with thousands of man-hours or utilize the allure of a single famous stone, whose size and flawlessness alone generate the piece’s absurd value.

Continue reading for our list of the 8 most expensive pieces of jewelry. 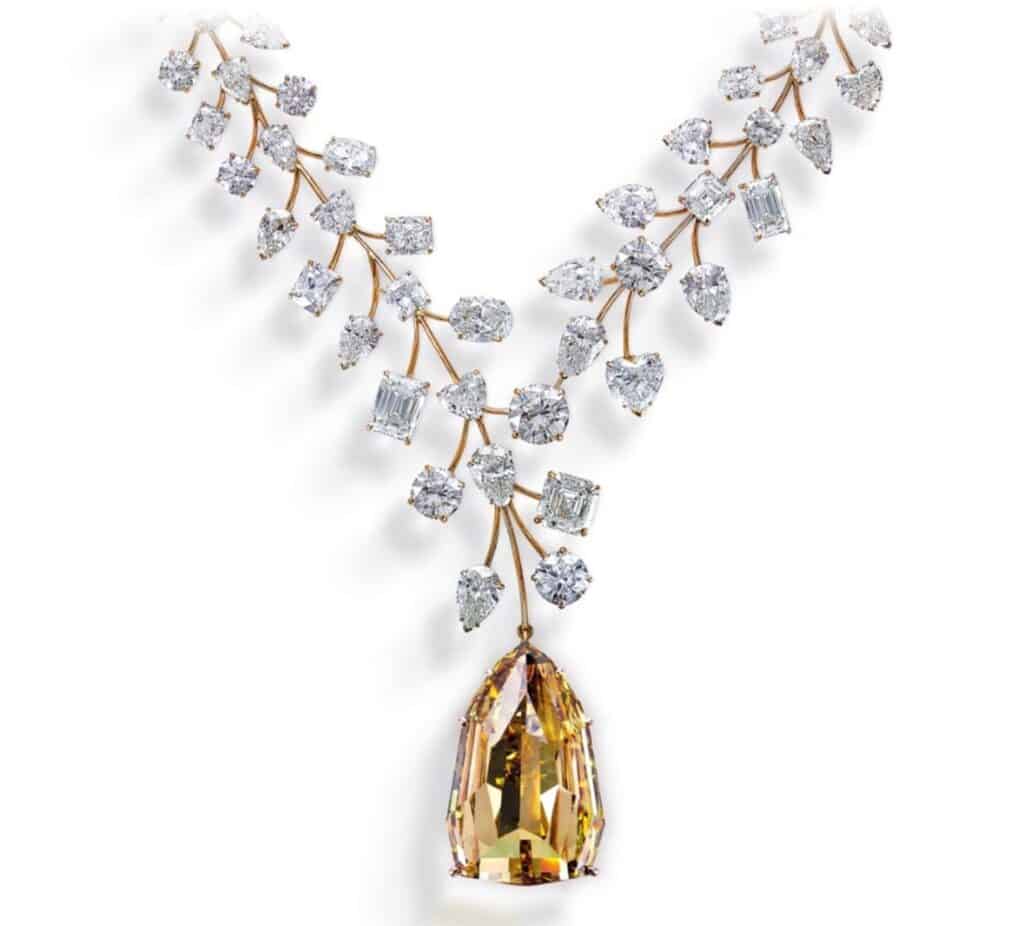 The L’Incomprable Necklace was created in Lebanon by the jeweler, Mouawad. At 407 carats, the yellow step-cut stone that hangs at the end of this rose gold necklace is the biggest internally flawless diamond in the world. On the gold chain, 91 white diamonds account for the last 200 carats.

All told, this necklace is valued at $55 million, which was a record at the time of its debut in 2013.

Unbelievably, the yellow stone that gives the L’Incomparable Necklace its value was discarded and found by a child in the 1980s, in a pile of mining debris in the African Congo. From there, the diamond was placed on exhibition in the Smithsonian in DC before becoming part of this famous necklace, which was unveiled in 2013 at the Doha Jewelry and Watch Exhibition. 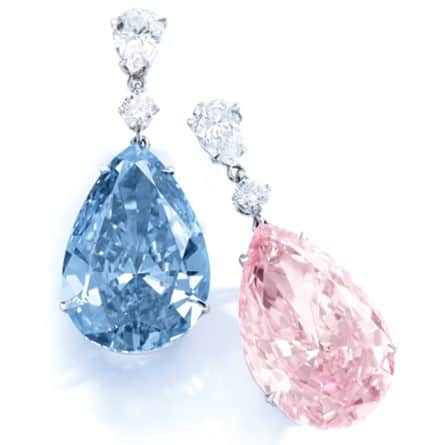 The second piece of jewelry on this list is the world’s most expensive pair of earrings. Though these two stones are separate, they are often associated and were sold at the same Sotheby’s auction in Geneva, where they fetched $57.4 million between them. The Apollo Blue earring is made from a fancy vivid blue diamond that weighs 14.54 carats.

Apollo Blue is by far the more valuable of the two because of its cut and color, purchased for $42.1 million. The Artemis Pink earring is made from a fancy intense pink diamond that weighs 16 carats but only accounted for $15.3 million of the sale price. 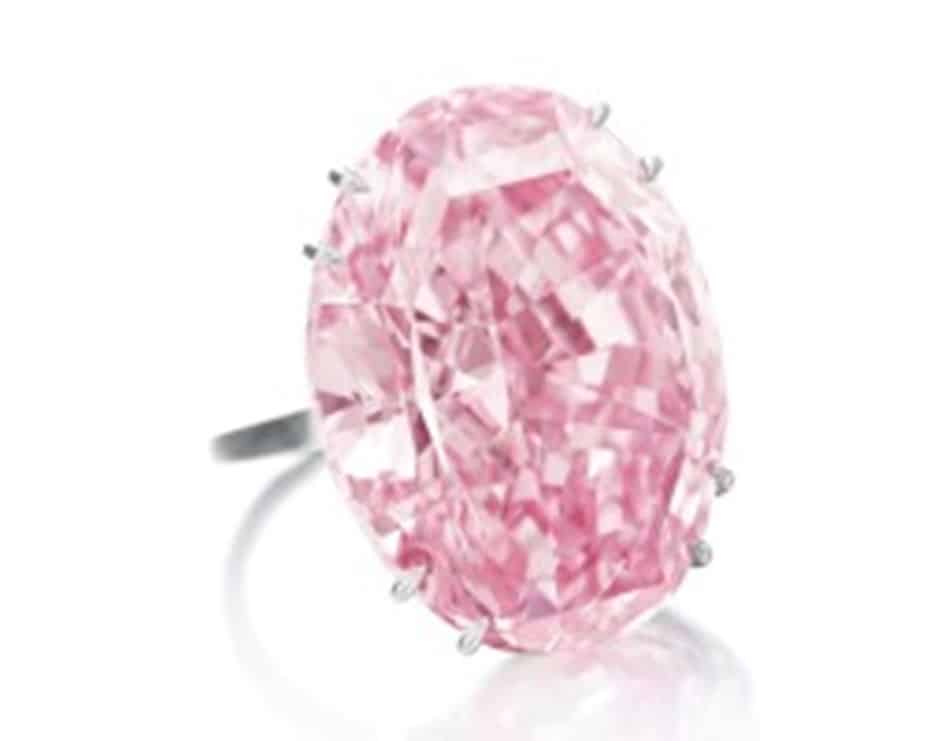 The Pink Star is a 59.60-carat diamond with a mixed oval brilliant cut, colored fancy vivid pink. It was discovered in 1999 in De Beers in South Africa, making it one of the most recently discovered stones on this list. When it was discovered, the stone weighed 132.5 carats, making the Pink Star the largest vivid pink diamond in recorded history.

The diamond used to be known as Steinmetz Pink, named after the original jeweler who spent 20 months cutting down the original stone. Ever since debuting at a public ceremony in Monaco in 2003, the Pink Star has only increased in value. It is now estimated to be worth $71.2 million.

Many people know the Pink Star from the famous “Splendor of Diamonds” exhibit at the Smithsonian. It was displayed next to the De Beers Millennium Star, another huge, flawless diamond that we’ll be talking about later. 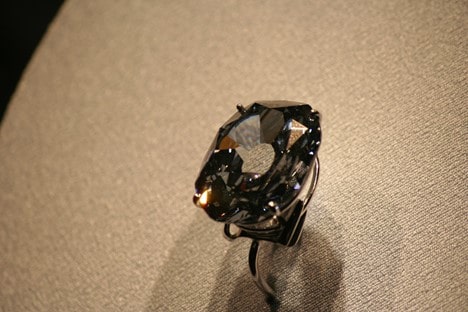 The Wittelsbach-Graff Diamond is 31.06 carats big, a fancy deep blue color, and preserved in an antique oval stellar brilliant cut. This diamond was originally mined from the famed Kollur Mines in the Guntur District of India (you’ll see it again later this list).

Now on display at the National Museum of Natural History, the Wittelsbach-Graff Diamond is a bona fide historical treasure. It’s tinted blue in all its 82, asymmetrical facets. 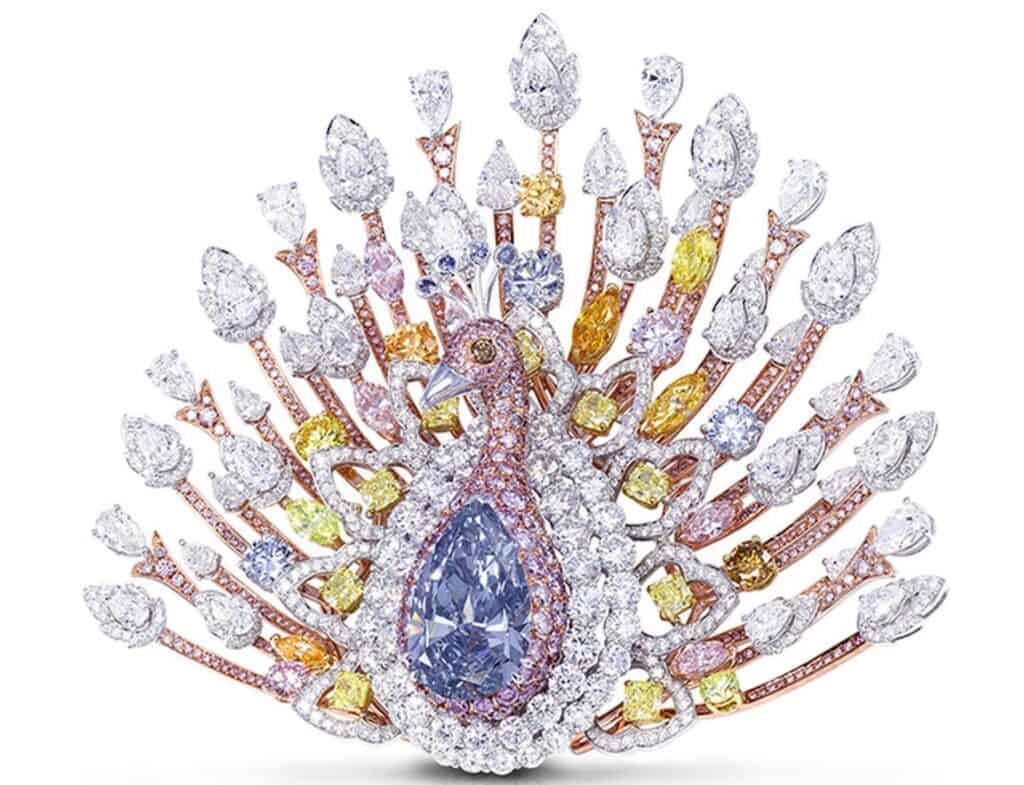 The Peacock Brooch by Graff Diamonds has the distinction of being the world’s most valuable brooch. It was debuted at TEFAF in Maastricht. It’s a peacock-shaped, diamond-studded piece that weighs a total of 120.81 carats. The centerpiece is a deep blue diamond that by itself weighs 20.02 carats.

The brooch has 1,305 diamonds, including pink, yellow, blue, orange, white, and green variations. That pear-cut fancy blue diamond in the center can be detached from the Peacock Brooch and worn by itself as its own statement piece.

Laurence Graff, the founder of Graff Diamonds, is known in the jewelry world as the king of diamonds. Not only brooches but also absurdly lavish, jewel-encrusted watches have solidified that moniker for him. 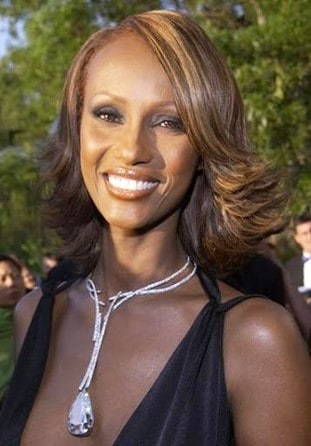 The largest single stone on this list is the Millennium Star, a gorgeous stone mined from Zaire, a former sovereign state in Central Africa, in 1990. The stone was bought by De Beers, who crafted it into a stunning necklace, with a platinum neckpiece, surrounded by 2000 brilliant diamonds (round cut).

The Millennium Star diamond alone is insured for $134.37 million. The necklace itself is priceless.

In addition to being the largest stone on this list, the 203-carat Millennium Star diamond is the largest pear-shaped flawless diamond in the world. In 2000, it became the subject of an intense scandal in the jewelry world as an attempted robbery of the necklace nearly became the biggest jewel theft in history. 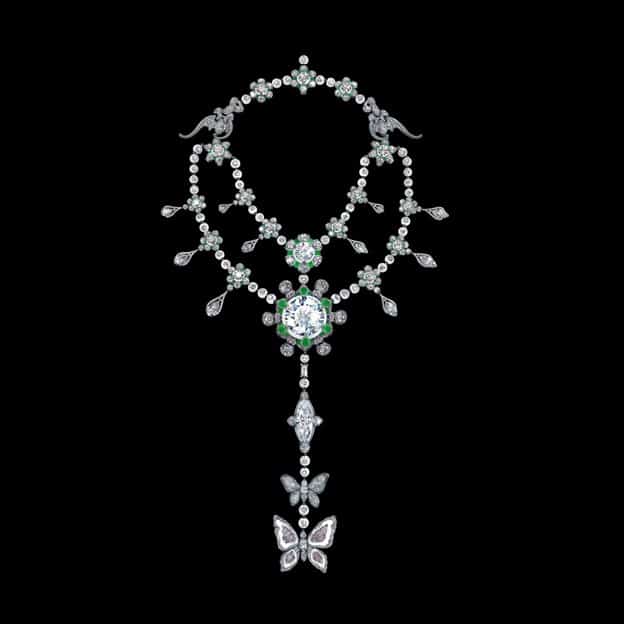 A Heritage in Bloom is a necklace designed by a Chinese jeweler named Wallace Chan. It includes 11,551 diamonds, weighing a total of 383.40 carats. They have been sculpted into Chinese cultural symbols such as butterflies and bats, set against sparkling swirls of green and white.

A Heritage in Bloom took its artist over 47,000 hours to create. Chan designed the necklace with a modular setup that allows it to be worn differently each time, for a total of 27 unique configurations. 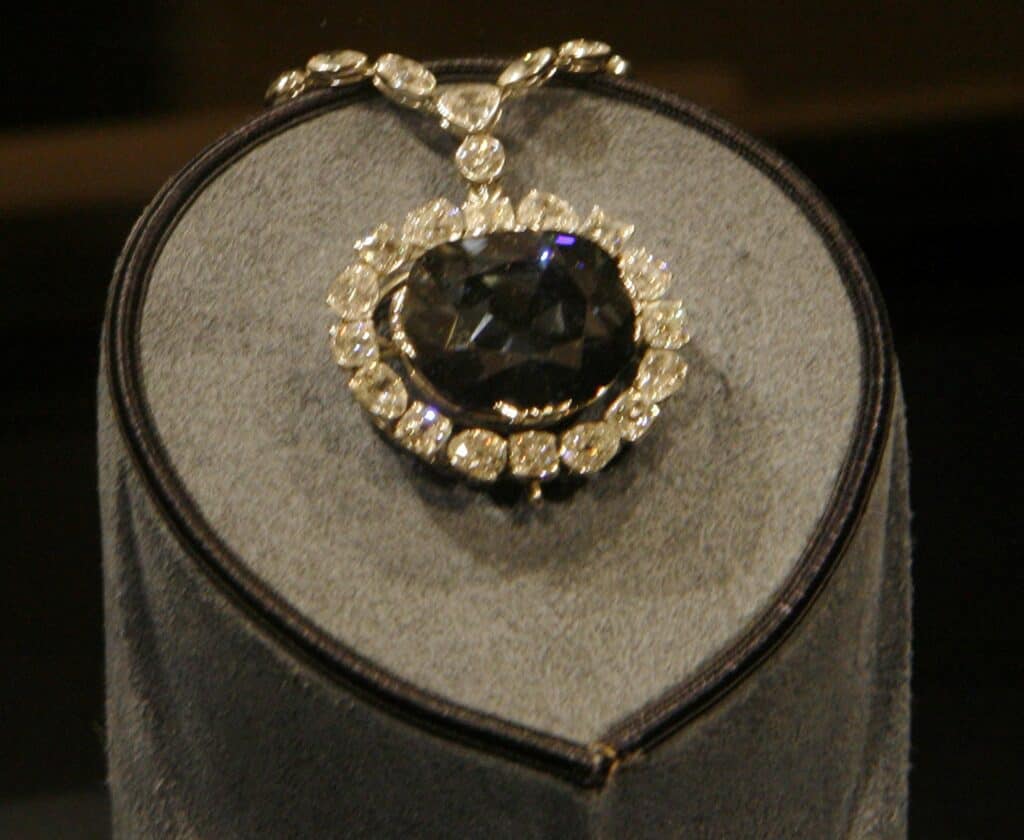 The most expensive piece of jewelry is the Hope Diamond. This diamond is currently kept in the National Museum of Natural History, though originally it was mined from India, from the Kollur mine. The presence of boron in trace amounts gives the gem its iconic blue tint. Though it does not have the most carats of any jewelry on this list (it’s “only” 45.52 carats big), it is the most expensive jewelry in the world because of the single jewel’s size, color, and flawlessness.

Truthfully, no one knows how much the Hope Diamond is worth, exactly. While it is valued at $300 million, the allure of this antique cushion-cut stone would likely fetch far more if it ever went up for auction.

The Hope Diamond is the most well-known of the legendary Golconda diamonds. Its earliest records go back to 1666 when a French merchant named Jean-Baptiste Tavernier purchased it and called it the “Tavernier Blue.” He then cut and sold the stone to King Louis XIV in 1668. The stone was stolen in 1791 and re-cut. The largest remaining chunk of the diamond showed up in a collection in 1839 owned by the English banking family, the Hopes, who renamed it after themselves.

The world’s most expensive jewelry is built around enormous, famous stones, cut by world-famous jewelers and sculpted into display pieces that sit in cases at museums and on the necks of royalty. Some of these pieces are newly discovered while others are centuries old, climaxing in the infamous Hope Diamond, which is both the most expensive and probably most recognized piece of jewelry in the world. While unlikely that you will ever own this jewelry, which costs dozens of millions of dollars even on the low end, their history and their beauty are for everyone.

10 Most Expensive Hotels in the World

8 Most Expensive Mountain Bikes in the Market Today