9 Most Expensive Pieces of Jewelry in the World

Jewelry has been worn by humans for thousands of years. Simple stone amulets have been discovered in the Mediterranean from the 3,000s B.C. Jewels have always held a special significance in people’s hearts as something between a decoration, spiritual artifact, and financial statement. They are no less alluring today!

For this list, we included anything that could be considered jewelry. We saved valuable stones that cannot be worn for another list.

Continue reading to learn about the 9 most expensive pieces of jewelry in the world. 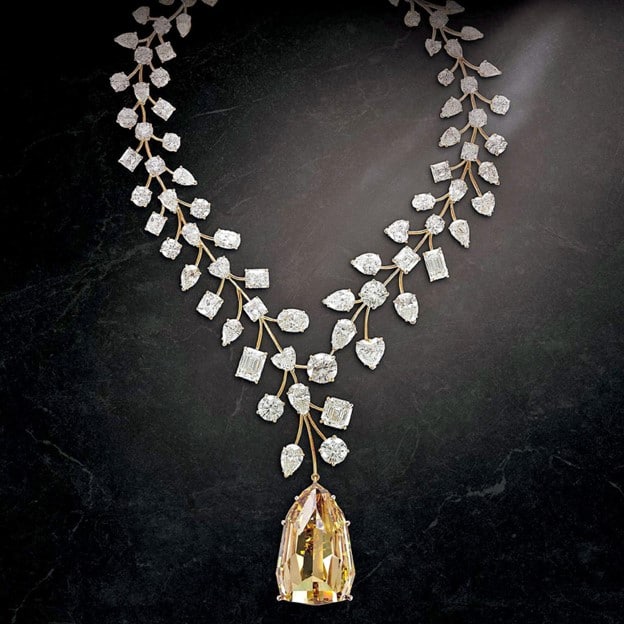 The centerpiece of the necklace is a flawless yellow diamond, the largest of its kind in the world. It alone weighs 407 carats, with 91 white diamonds trailing up the neck for the other 230 carats.

The necklace was said to be worth around $55 million when it debuted to the public in 2013. Like most of the jewelry on this list, this is only a valuation — if it was ever sold, L’Incomparable would probably fetch even more due to fierce competition among collectors and the allure of the piece’s reputation.

The fascinating history of L’Incomparable begins in the Congo in Africa, outside of a diamond mine where the yellow stone in its natural state was mistaken by miners for valueless yellow quartz or other deposits. The stone was found by a kid in a pile of debris before eventually falling into the hands of someone who knew what it was.

After trading hands many times, this stone, which was mined in the 80s, was finally unveiled at the Smithsonian museum in 2013. It was revealed to the world at the exhibit known as the Doha Jewelry and Watches Exhibition. 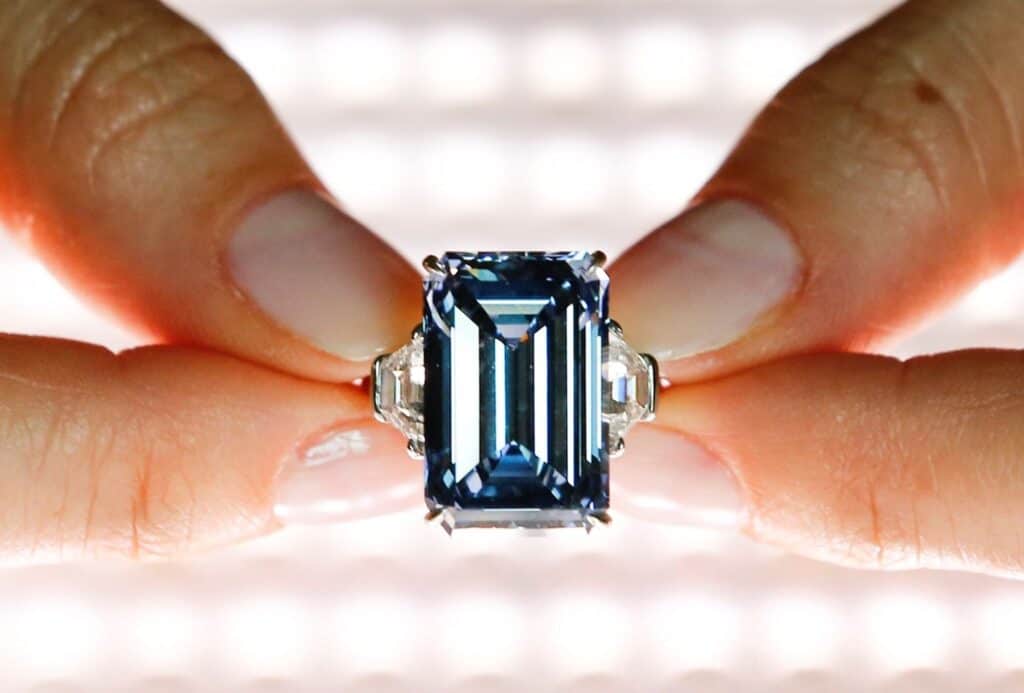 Oppenheimer Blue is a fancy vivid blue diamond. When it was sold in 2016 at a Christie’s auction for over $60.97 million, it became the most expensive single diamond ever sold at the time. It’s a rectangular-cut diamond said to represent loyalty.

Vivid blue diamonds are the most expensive diamond color. This particular 14.62-carat stone was originally owned by Philip Oppenheimer, hence the name.

Two anonymous bidders were in intense competition for the stone at the auction. The winner has never made themselves publicly known.

Philip Oppenheimer was an English racehorse owner who happened to be one of England’s premier diamond dealers in the 1900s. 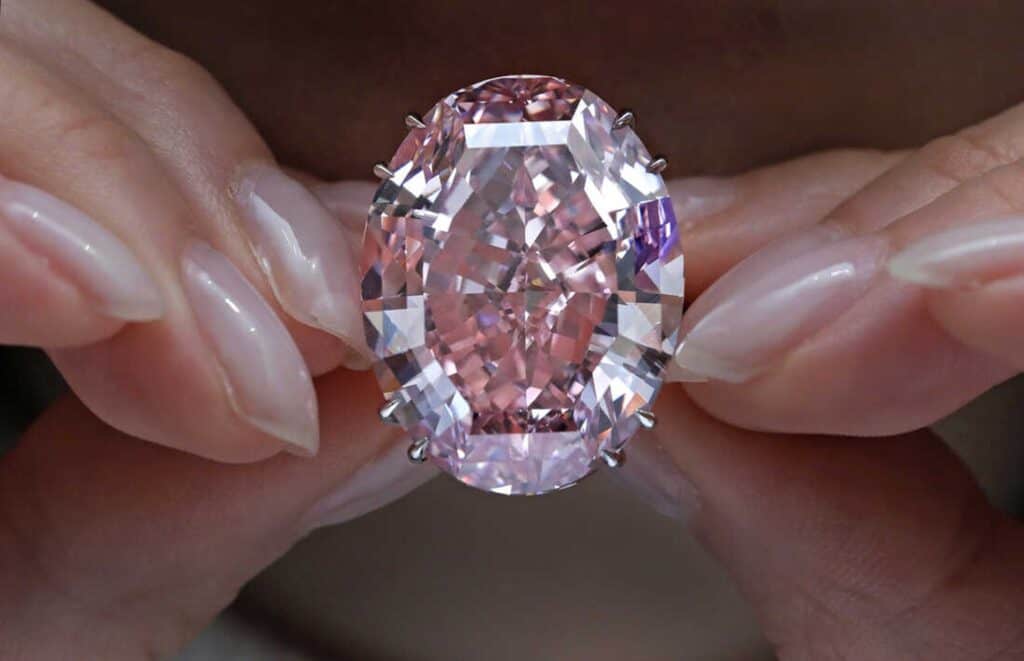 The Pink Star is one of the most famous diamonds in the world. It’s a fancy vivid pink stone, refined into a mixed oval brilliant cut from the original stone, which was 132.5 carats to begin with. This makes it the largest vivid pink diamond ever mined.

The stone was discovered in South Africa in De Beers in 1999 and was named the Steinmetz Pink after the original jeweler who got ahold of it. The diamond was unveiled in Monaco in 2003 at a public exhibition. The now-59.6-carat stone is worth an estimated $71.2 million.

The Smithsonian has a popular exhibit known as the “Splendor of Diamonds.” The Pink Star is on display there along with the Millennium Star, a diamond that became an ultra-valuable necklace that appears later this list. 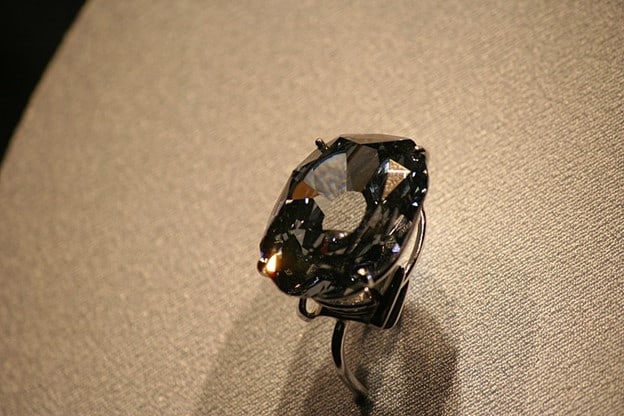 Sourced from the Kollur Mines in India in the Guntur District, the Wittelsbach-Graff Diamond is a fancy deep blue stone weighing 31.06 carats. The stone is displayed in an oval stellar brilliant cut and now resides at the National Museum of Natural History.

This diamond, like so many valuable stones, is rife with history. It was used as a crown jewel of both Bavaria and Austria before being bought by Graff in 2008.

Graff bought the diamond in 2008 and made a controversial decision in 2010 when then decided to cut about 4 carats off to remove some of its flaws. Many people view famous stones as historical artifacts, so the decision was received poorly by some preservationists. 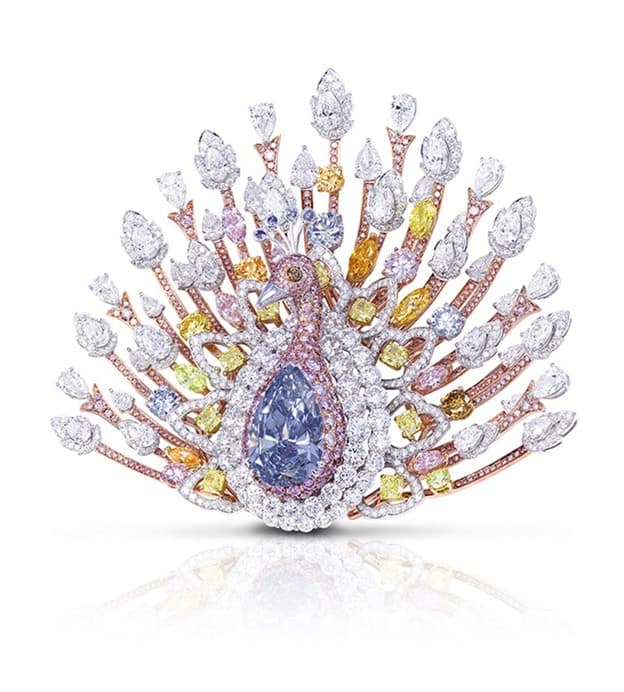 Graff Diamonds made the Peacock Brooch out of 120.81 carats of flawless white and colored diamonds. The stone in the center is a deep blue diamond weighing 20.02 carats. Graff debuted the brooch in Maastricht at TEFAF, The European Fine Art Fair.

The brooch’s diamond color variations include stones in blue, orange, yellow, pink, white, and green. In total, the stone feathers of the peacock brooch consist of 1,305 separate diamonds. The deep blue centerpiece can be detached and worn by itself.

The Peacock Brooch is worth $100 million.

TEFAF was first held in 1998 in the Netherlands. The ten-day fair now happens annually and attracts an average of 75,000 art fans from around the world. 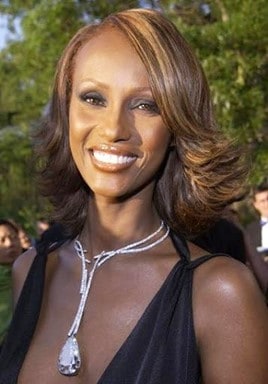 The Millennium Star Diamond Necklace was made from a huge stone mined from Central Africa in Zaire, known as the Millennium Star. The 203.04-carat stone was bought by the jewelers at De Beers and fitted into a platinum necklace that includes 2,000 other round cut stones.

The necklace’s true potential value is not known. But since it is insured for $134.37 million, it must be worth at least that much. If it was ever auctioned, it would likely sell for much more.

The Millennium Star stone is a huge diamond. It’s the largest flawless pear-shaped diamond on earth and was even the subject of an attempted grand theft in 2000. Had they pulled it off, it probably would have been the most expensive robbery in history.

3. A Heritage in Bloom 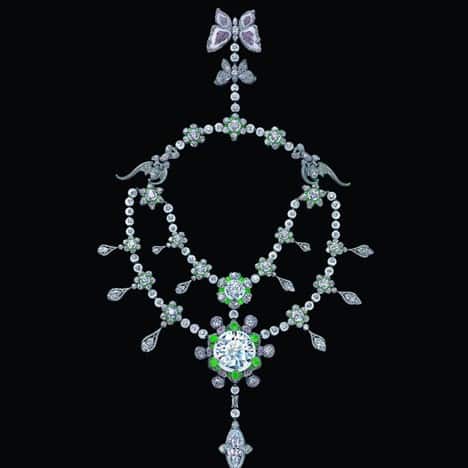 Wallace Chan, the famed Chinese jeweler, created A Heritage in Bloom, a piece of jewelry art that contains over 383 carats of diamonds. That weight is spread out over 11,551 diamonds, arranged in Chinese mythological symbols against green highlights made from jade.

The main diamond in the piece is the flawless, 24 D Cullinan Heritage diamond, which takes up 104 carats. The necklace is valued at $200 million, making it one of the most expensive pieces of jewelry in the world.

Chan designed and fashioned the necklace for over 47,000 hours. The necklace’s structure allows it to be worn in different configurations for multiple styles of display, totaling 27 different versions. 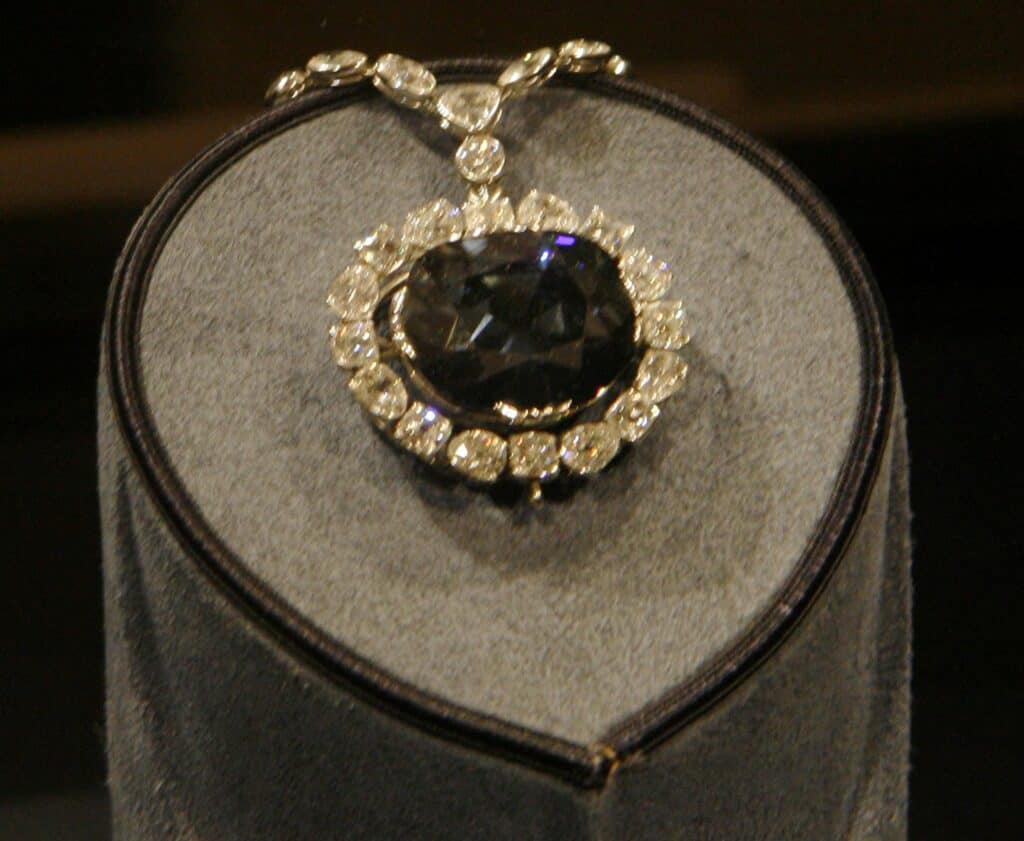 The Hope Diamond is without a doubt the most famous diamond in the world, kept in the National Museum of Natural History. Originally, it was sourced from the Kollur Mine in India, one of the world’s most famed sources for valuable diamonds.

This particular diamond is tinted blue due to traces of boron in its composition. While only 45.52 carats in size, they are all devoted to this single diamond’s flawless, cushion-cut, gorgeous surface.

While the Hope Diamond isn’t likely going to be sold, it is valued at around $300-$350 million. Many experts suggest it would sell for far more based on its fame if it ever made it to an auction block.

The earliest known mention of the Hope Diamond in history goes back to 1666 when Jean-Baptiste Tavernier bought it. This is why it was originally called the “Tavernier Blue,” a diamond that was cut and gifted to King Louis XIV of France.

Over time, the stone was recut multiple times, even being stolen in 1791. When the largest remaining piece of the diamond reappeared in 1839, an English banking family named the Hopes purchased it, giving it its now-famous name. 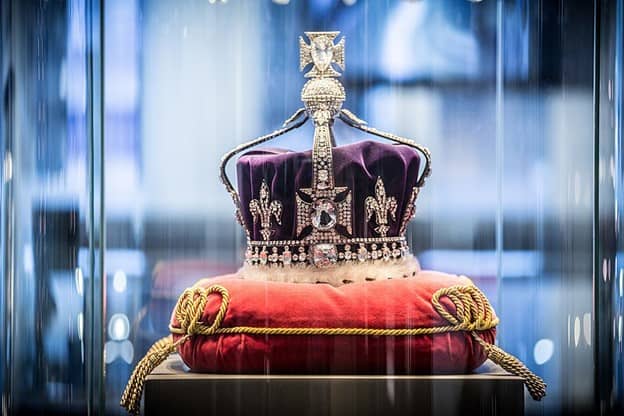 The most expensive piece of jewelry is the Queen Mother. It is one of the crown jewels of England and is a crown made from purple fabric and an assortment of jewels. The centerpiece is the 105.6-carat jewel known as the Koh-I-Noor diamond, valued at $520.7 million.

This diamond was originally sourced from the famed Kollur Mine in India. After extraction, it became the property of Delhi’s Sultan, who had to fight for ownership of the stone. Throughout history, the stone cost many their lives on its journey to becoming the property of the British royal family.

Initially, it was worn by Queen Victoria as a brooch, but later removed and turned into the crown jewel known as the Queen Mother.

The Koh-I-Noor diamond is an old stone, dating back to South India sometime between the 1100s and 1300s.

8 Most Expensive Disney Resorts You Can Stay At (2022 Prices)

8 Most Expensive Fidget Spinners Ever Sold