Crystals are some of the most widely collected items in the world because of their beauty. In recent years, crystal collecting has also increased in popularity because of the rise of alternative medicine – many people believe that crystals have healing properties. While there is no scientific evidence to support these claims, it has not stopped people from collecting crystals.

The rare crystals on this list may not heal someone, but they are unique and hard to find. In addition to being the world’s rarest crystals, the high-quality versions of the crystals on this list are also some of the rarest gemstones in the world. Gemstones are minerals that have formed crystals that are cut and polished and made into jewelry.

Alexandrite is the unique color shifting variation of the Chrysoberyl crystal. Although Alexandrite is more common than some of the other rare crystals on this list, large gemstone quality crystals are extremely rare and difficult to find. This is why the maximum value for a high-quality Alexandrite stone is about $70,000 per carat.

The best examples of Alexandrite shift from green to bluish green in daylight and red to purplish red in incandescent light. Alexandrite was named for Czar Alexander II because for many years, this rare crystal was only found in the Ural Mountains of Russia. A majority of the largest and better quality Alexandrite crystals still come from the Ural Mountains, but stones are also found in Brazil, India, Madagascar, Tanzania, and Sri Lanka. 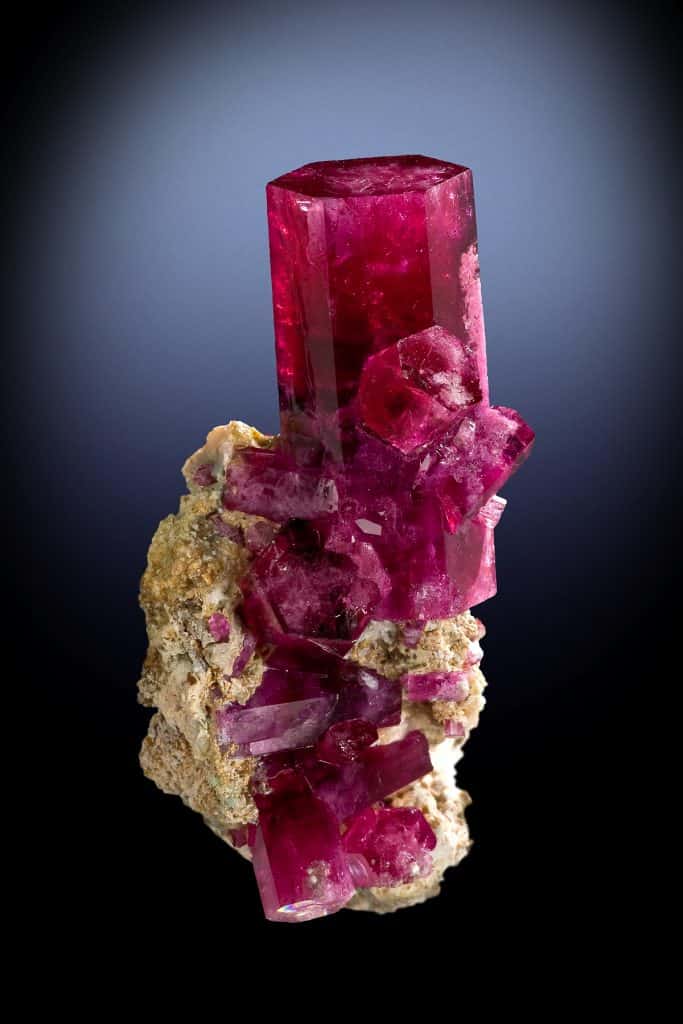 Red Beryl, which is also known as Bixbite, is the rarest form of Beryl, but not the most valuable – that distinction belongs to the Emerald, which is a green Beryl. Red Beryl is so rare that it is only found in a few places in the United States. According to the Utah Geological Survey, only one Red Beryl is found for ever 150,000 diamonds.

Red Beryl was first described in 1904 based on a discovery at Maynard’s Claim in the Thomas Mountains in Western Utah. The rare crystal was initially named Bixbite for Maynard Bixby, an American mineralogist. 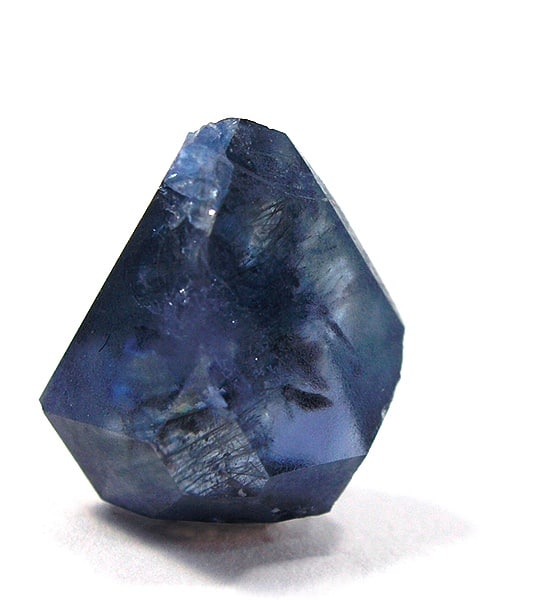 Gemstone quality Benitoite has only ever been found in San Benito County in northern California. Benitoite was first discovered in 1907 by James Couch and like many of the rare blue crystals on this list, Benitoite was initially believed to be sapphire. Couch sent sample back to University of California, Berkeley where geologist George Louderback identified it as a new mineral.

Benitoite has been found in other parts of the world, like Arkansas, Japan, and Australia. However, only the Benitoite from California is gemstone quality and can be made into jewelry. Benitoite was designated as the official state gem of California in 1985. 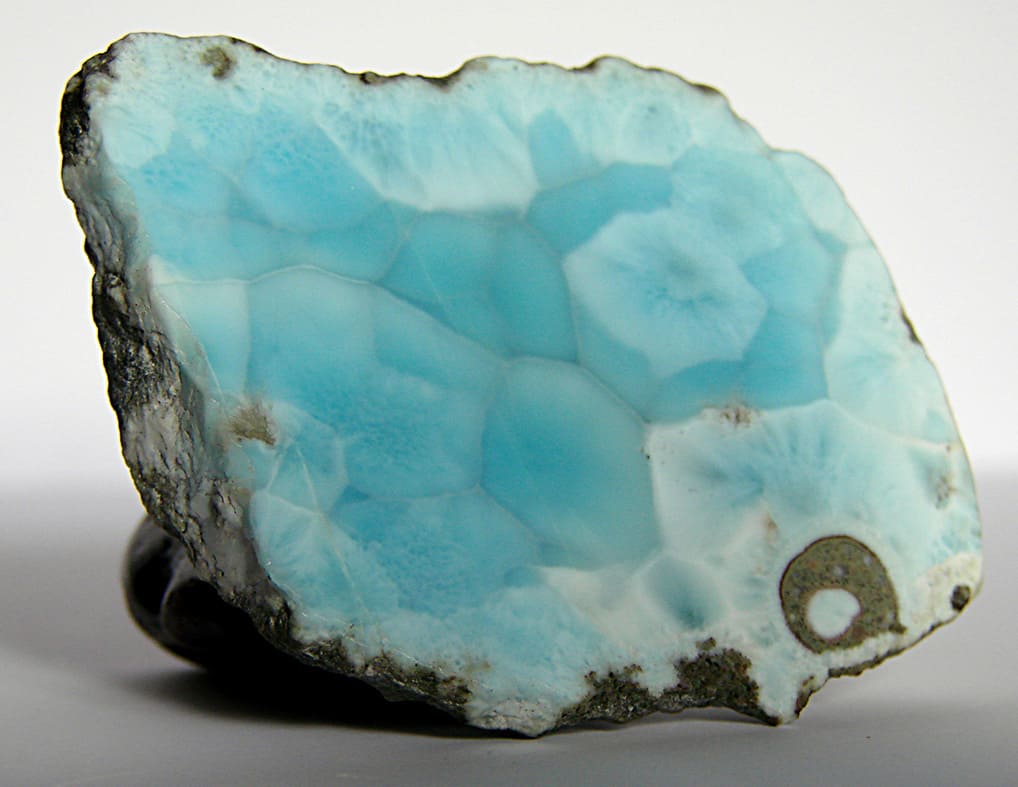 Larimar of Blue Pectolite is a rare crystal only found in the Dominican Republic. Normal Pectolite is a common mineral and is gray, but Larimar is rare because it only occurs in one known place in the world.

Although Larimar is fairly new to the commercial markets, its been a prized gemstone for generations in the Dominican Republic. According to one story, the first widely reported discovery of Larimar happened in 1916. This rare crystal was found by Father Miguel Domingo Fuertes Loren, but was forgotten for many decades. Larimar was rediscovered in 1974 by Miguel Méndez, a local Dominican, and Norman Rilling, a visiting US Peace Corps volunteer. They named the crystal after  Méndez’s daughter Larissa and “mar” the Spanish word for sea. 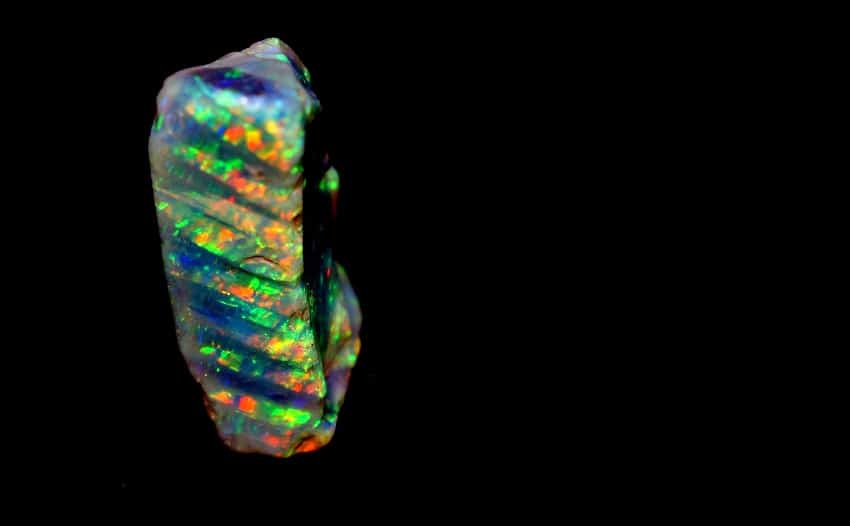 The Opal is the national gemstone of Australia and the Black Opal is the rarest and most valuable form of Opal. Pretty much all of the world’s Black Opal comes from the town of Lightning Ridge in northern New South Wales, Australia.

Opal was first discovered in Lightning Ridge in the late 1880s, but the first Black Opal were not found until 1903. The most famous Black Opal in the world is the “Aurora Australis”, which of course was found at Lightning Ridge. The Aurora Australis is a massive Black Opal that weighs 180 carats and is 3 inches by 1.8 inches. This rare crystal also has a vibrant pattern with strong red, green, and blue colors against a black background.

Reason for Rarity: Only found in one small location in the world
Location: Merelani Hills of Manyara Region in Northern Tanzania
Mineral Composition: Calcium, Aluminium, and Hydroxyl sorosilicate
Value: $600 to $1,000 per carat 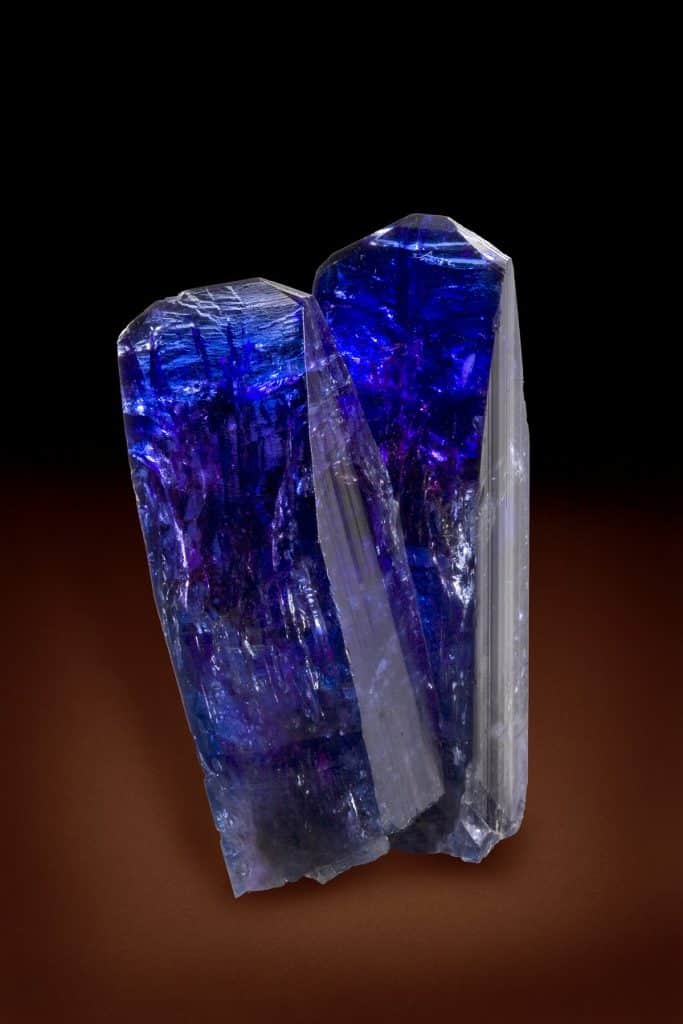 Tanzanite is a blue-violet variation of the mineral Zoisite. This rare crystal is only mined in one place in the world, the Merelani Hills of Northern Tanzania. Tanzanite was discovered in 1967 by a Masai tribesman who found a cluster of highly transparent, intense violet-to-blue crystals. The Masai tribesman told local fortune hunter Manuel d’Souza what he had found and d’Souza initially thought that it was a new deposit of sapphires.

After the initial discovery of this first cluster of Tanzanite, more reports came in that other similar crystals were found in a 20-square mile area. Tiffany & Company dubbed this newly discovered crystal Tanzanite, after its home country, and marketed it as a rare gemstone. 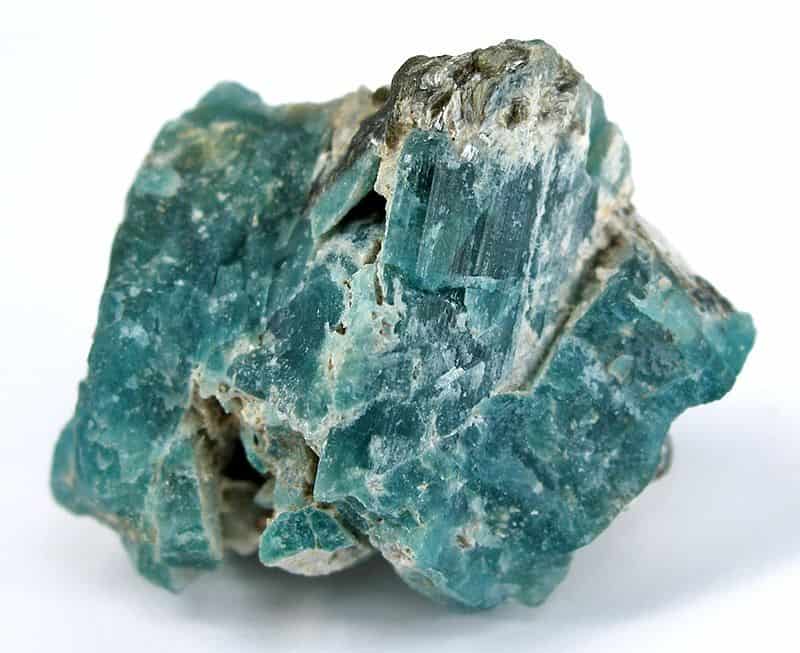 Reason for Rarity: Only a few known examples existed for many years, but now more than 1,000 samples have been found
Location: Myanmar (Burma)
Mineral Composition: Calcium, Zirconium, Boron, Aluminum, and trace amounts of Chromium and Vanadium
Value: $50,000 to $60,000 per carat 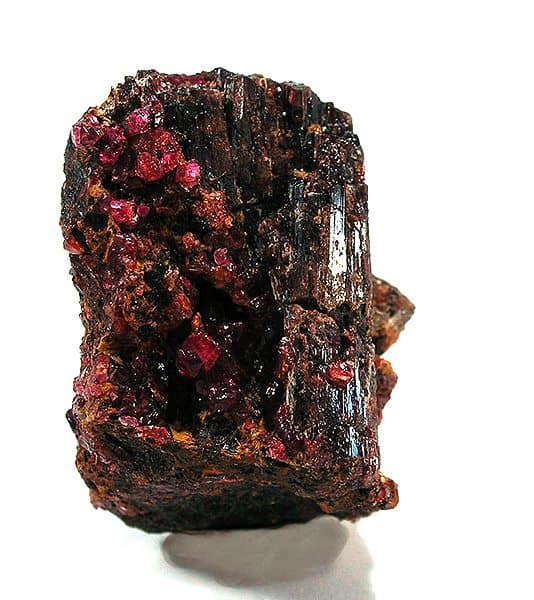 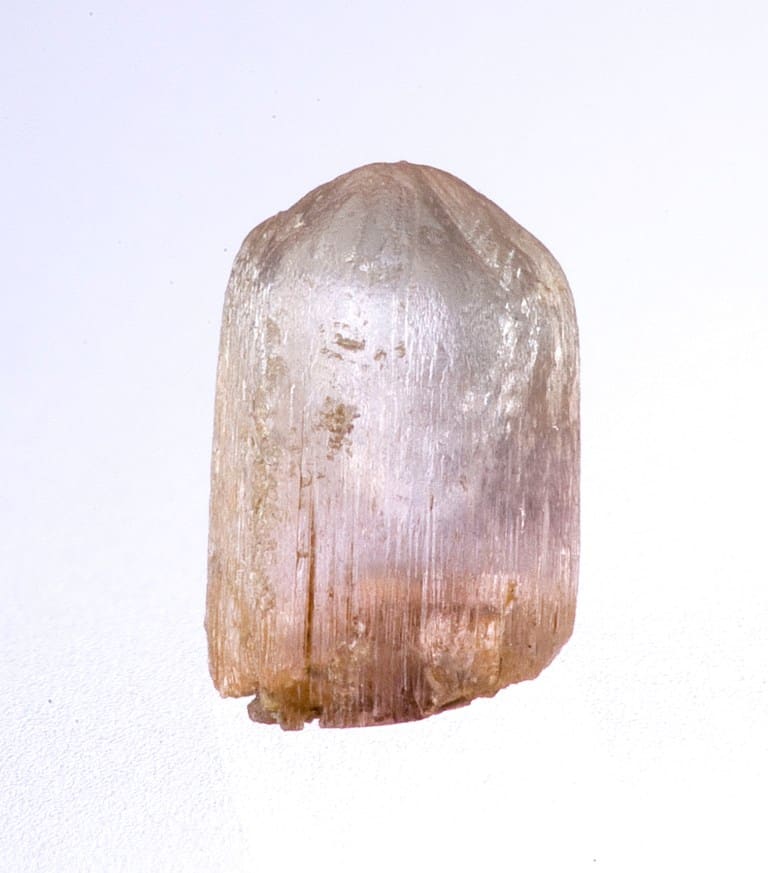 These first seven Poudrette crystals were not officially recognized as a new mineral until 1986 and for several decades, there were no reported discoveries of additional Poudrette crystals. In 2000, an Italian gem dealer purchased an unfamiliar rough crystal of gem quality in Mugok, Myanmar. After this crystal was submitted to a lab, it was determined to be the first gemstone quality Poudretteite ever discovered. Since then, only a few dozen more Poudretteite crystals have been found. 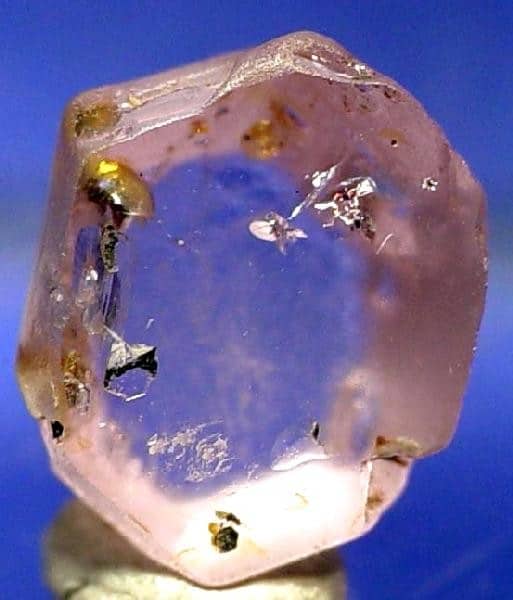 Taaffeite is considered the rarest crystal in the world because there are only around 50 known samples of this rare gemstone. When Taaffeite was first identified in 1945 by Irish gemologist Edward Taaffe (the rare crystal’s namesake), he initially thought it was a spinel. Other gemologists also note that Taafeite reacts to gemological tests like mauve-colored spinel.

For many years, there were only two known Taaffeite stones, the first one that was given to Taffe and a second one which is now housed in the Geological Museum in London. Additional gemstone quality Taffeite crystals have been found in Sri Lanka as well as Tanzania.

8 Rarest Books in the World