In terms of coin collecting, the 1987 Lincoln Penny is extremely current, and it is commonly encountered in change. Unless it’s a rare mistake coin, the 1987 penny’s worth is determined by its sentimental value. The ability of coins and coin collections to serve as a record of historical events that took place in a specific year is one of its most remarkable features.

They can also serve as a memento for someone who was born in that year or who had an important life event occur in that year.

The 1959 Lincoln Memorial reverse, designed by Frank Gasparro, took the place of the 1909 Brenner wheat stalk design that appeared on the 1986 cent. The Lincoln Memorial’s lower right side bears Gasparro’s initials, FG. The words “ONE CENT” are inscribed beneath the structure and around the rim, while the words “UNITED STATES OF AMERICA” are printed all the way around the upper half of the reverse along the rim.

The motto E PLURIBUS UNUM is inscribed between the words UNITED STATES OF AMERICA and the top of the Lincoln Memorial.

The Lincoln cent’s edge is plain and free of etching or reeding.

To reflect shifting metal prices, Lincoln Penny’s metal composition was altered in 1982. This indicates that, as opposed to the nickel and copper combination seen earlier, the 1986 Lincoln Penny is composed of 97.5% zinc and 2.5% copper.

1987 was a fair bit more peaceful year compared to the previous. In April, The Tracey Ullman Show airs the first “The Simpsons” animated short, and The Disney Corporation and France decide to build an amusement park. President of the United States Ronald Reagan gave a well-known address near the Berlin Wall in West Berlin. 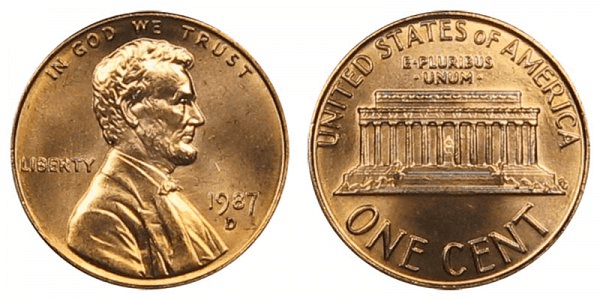 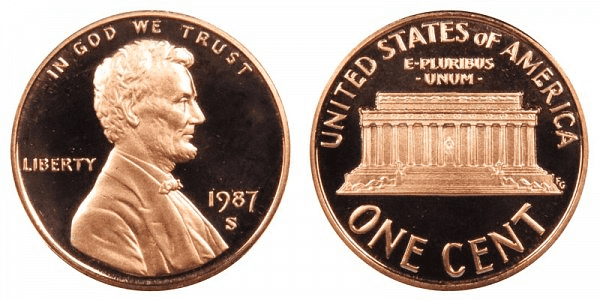 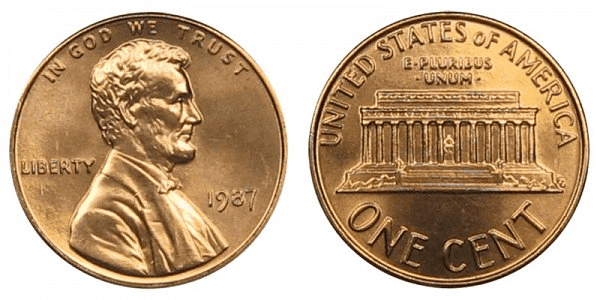 Doubled die penny errors have some of the coin’s design or inscription doubled. This is because the die, which is used to generate the dies that strike coins, is impressed twice and at slightly different angles or directions in a hub.

There are a few 1987 doubled die mistake pennies that have a light doubling in the writing, date, Lincoln’s eye, and the columns of the Lincoln Memorial, but none that are known to be worth hundreds or thousands of dollars. Some doubled die coins from 1987 are worth $25 to $50 or more!

On some 1987 pennies, there is known to be a tiny vertical die crack in the little gap between the letters “B” and “E” in the word “liberty.” These coins are referred to as BIE variants. They often cost between $3 and $10.

Off-center pennies lack some of their design because the dies did not strike the coin evenly when it was produced. Coins with 1% or 2% of their design lacking ranging to nearly blank sections make up the spectrum of off-centre faults. The most desirable of these faults are often 5% to 10% off-centre and lack around half of the design while still displaying the full date and mintmark (if applicable). 10% to 20% off-centre 1987 off-centre mistake pennies are worth about $10 to $20, whereas pennies with a complete date that are 50% off-centre can fetch up to $100.

Silver pennies are one of the most frequently reported inaccuracies. Find a silver penny from 1987? It’s most likely merely the end result of a typical school experiment in which the zinc core’s silvery tint is chemically separated from the coin’s copper outer layer. There are stories of 1987 pennies, meanwhile, that were never copper-coated from the start and could be worth $50 or more.

1987 Lincoln There is no intrinsic metal value in pennies, which have a melt value that is about equal to their face value. Circulated pennies don’t have a value above their face value unless they have a specific quality.

Because 1987 Pennies are primarily valued as novelty or sentimental coins for people who were born in the year, got married in the year, or had other significant events occur in the year, flea markets, estate sales, and online marketplaces like eBay are the best places to purchase 1987 Pennies by the roll. When dealing with uncommon or valuable coins, such as the 1987 Pennies with flaws or those in excellent condition, working with reputable coin dealers and auction houses (like Heritage Auctions) is vital for additional piece of mind. If you’re unsure whether your penny has a more valuable mint fault or not, seek guidance in online communities.

Common 1987 Error Pennies can be worth $10-100+ making them a pretty nice find if you encounter them in your pocket change.

The most rare 1987 pennies to look for aren’t those with errors, but those in exceptional condition. These coins can reach $500+.

12 Most Expensive Sapphires Ever Sold