9 Most Expensive Jade Ever Sold

Jade is a treasured stone in not only China but throughout the eastern and western worlds. It has been valued for its religious and philosophical significance for thousands of years, meaning that some of the oldest jewelry known to exist is made from jade.

In our list, we break down the 9 most expensive pieces of jade that have ever sold to give you a snapshot of this incredible (and incredibly beautiful) stone. 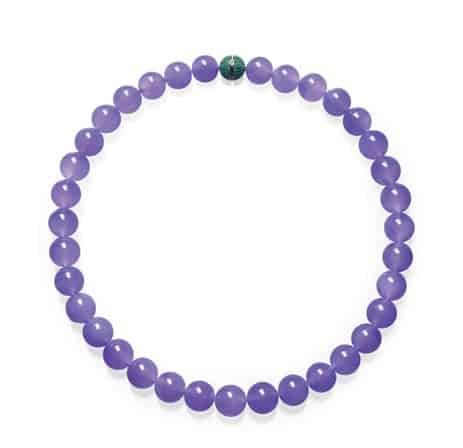 This is a Lavender Jadeite Necklace that was sold at a Poly auction in Hong Kong on October 2, 2018. It featured 35 graduated jadeite beads measuring from 14.64 to 15.66 mm.

Lavender jadeite is not typically the most prized form of jade, but this necklace was exceptional enough to break the world auction record for a necklace made from it.

“Fu lu shou” is the Chinese term for jade that contains both green and lavender, which in certain lights also looks red. The most important feature of a jade stone’s hue is its saturation or “nong.” When highly saturated, a jade stone will still appear vibrantly colored even when viewed from a distance. 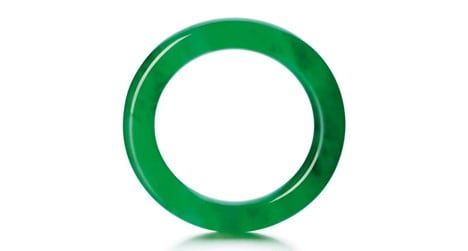 The jadeite bangle known as the Circle of Happiness did not sell when it went across the auction block for the first time.

Though it was initially valued at $10 million or more, it did finally sell on April 20, 2021 for considerably less – around $3.876 million. Regardless, this was still a world record for a jadeite bangle.

Circle of Happiness is one of the oldest and most historically significant pieces of jade jewelry. It is estimated to be over four thousand years old, dating back to ancient China.

The bangle is the most popular form of jade jewelry. In China, it is believed that jade bangles, which symbolize eternal unity, will protect those who wear them from disaster. The jade circles are said to absorb negative energy in an amount equal to the good fortune or “fuqi” of its wearer.

Chinese philosophy also believes that pairs of things bring good fortune, which is why these bangles were often made two at a time. The sister bangle to Circle of Happiness has never been discovered, however. 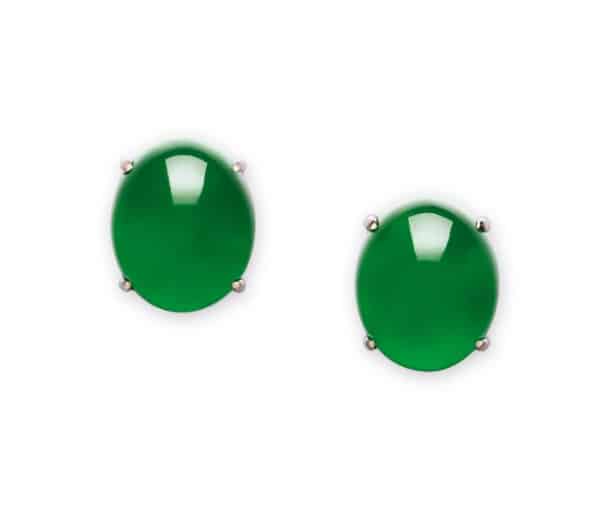 This pair of jadeite and diamond ear studs sold at a Christie’s auction in Hong Kong, setting a record for a pair of earrings like this. The jadeite cabochons (the smooth stones) have high domes, set into backs that are mounted in 18k white gold. The jade cabochons are approximately 26.41 x 21.81 x 11.08 mm in size.

The jade was sourced from Myanmar and was analyzed by a lab for polymers to confirm that the cabochons are 100% natural jadeite. The earrings were sold on November 25, 2014 at a live auction for $6.579 million.

Gems from Myanmar, including jade and rubies, cannot be legally imported into the United States. This is why Christie’s and other auction houses sell these items in Hong Kong. However, a loophole exists where the stones can be imported if they are permanently integrated into jewelry that was not made in Myanmar. 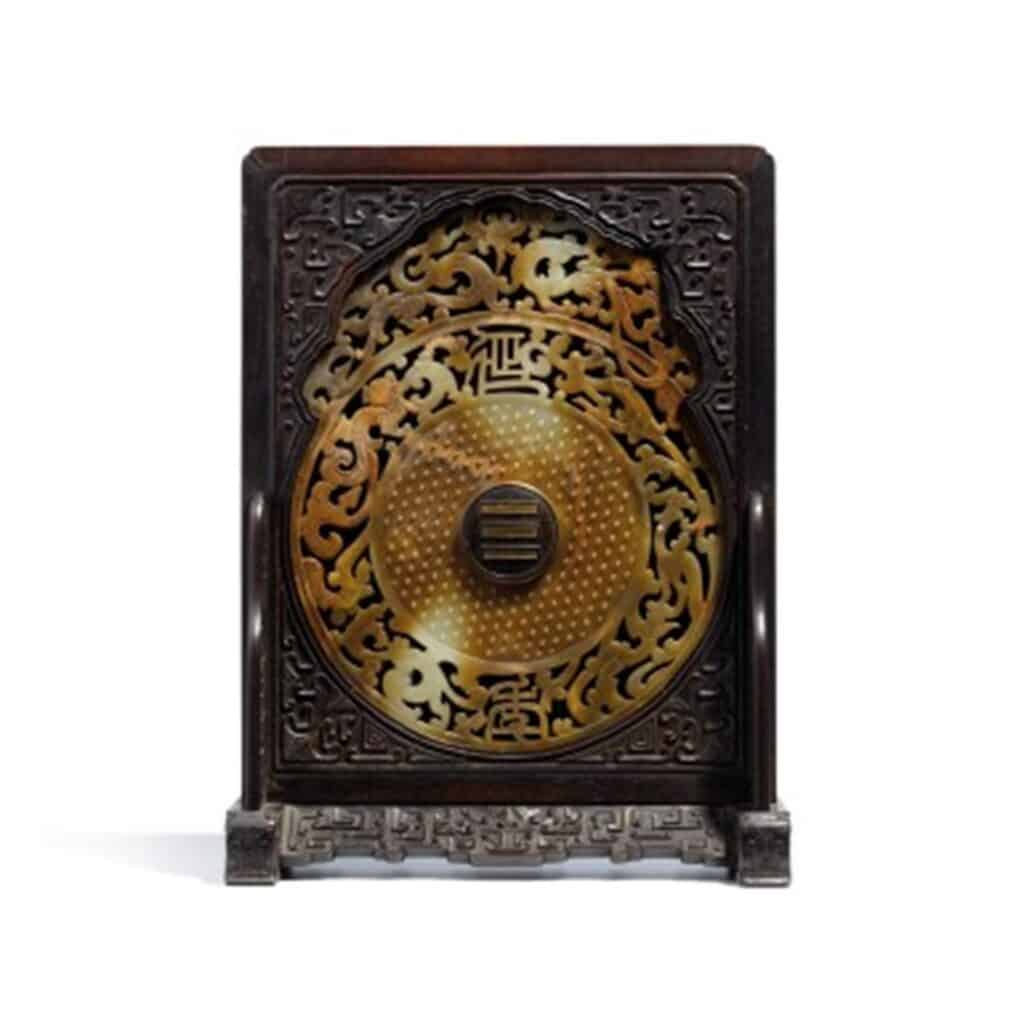 This Unnamed Zitan-Mounted Imperial Inscribed Archaic Jade bi was forged during the Eastern Han dynasty in China. According to the inscription, it was made in the Gengyin year of the Qianlong period, or 1700.

The carving shows two battling dragons and a phoenix, with an outer edge inscribed with the Qianlong Emperor’s zhuanshu. This includes an inscription of the year, which is how we know exactly when it was made.

The back panel secures the jade in place while a secondary inscription was made in gold.

This piece was sold at a 2021 Sotheby’s auction for the HKD equivalent of over $6.85 million.

A “bi” is a Chinese jade artifact. Examples have been discovered that date back to the Neolithic period, around 3,000 BCE. The bi is a round disc that symbolizes heaven with the earth in the center, suggesting some of the earliest cosmological concepts in human history. 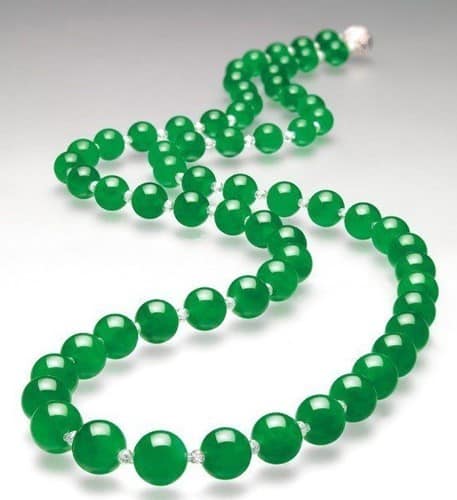 The Double Fortunate Necklace derives its name from a boulder of jadeite known as Doubly Fortunate. The 27 cabochon beads of the necklace measure 15.09 to 15.84 mm in size.

The terminals of the necklace are made from European-cut diamonds, as is the single-stone clasp.

The necklace in total weighs about 11 carats worth of precious stones and has that pure emerald-green look of the finest Myanmar jade.

Like many of the jade pieces on this list, when Doubly Fortunate sold it was at that time the most expensive piece of jade jewelry ever sold at auction. For thousands of years, jade has been known as the “stone of heaven.” Doubly Fortunate doesn’t do much to dissuade that reputation! 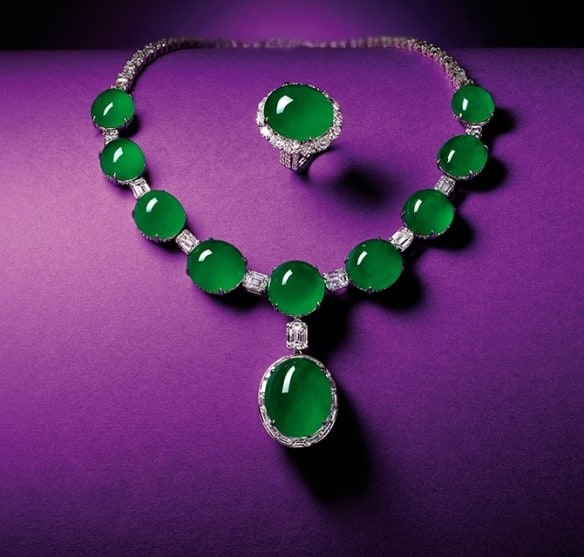 The Unnamed Jadeite Necklace Featuring 10 Jadeite Cabochons was sold with a matching cabochon ring with beads measuring from 25 x 20 mm down to 14 x 7 mm. The necklace set the world record for a set of jade cabochons at the time.

The necklace, sourced from Myanmar, was sold at a Tiancheng International auction in November 2012 for over 92 million HKD, or the equivalent of $11,727,455.16.

Due to jade’s chemical structure, it is rarely faceted or cut like a normal gemstone. Like rocks, jade is normally polished and shaped into smooth shapes called “cabochons.” All stones were polished like this before the science of gem-cutting was invented. 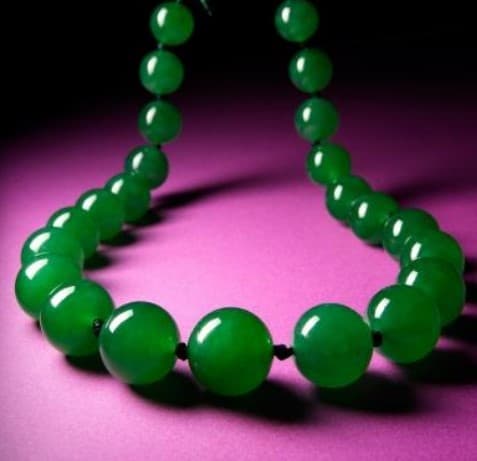 The full listing for this necklace was the “Unnamed Imperial green jadeite jade necklace featuring 23 round beads.” Each jade bead measures from 17.35 mm to 20.71 mm, made from jade sourced from Myanmar (formerly known as Burma).

It was sold at a Tiancheng International auction in 2012 for over 106 million HKD, or the equivalent of about $13.5 million.

This necklace was the world record holder for the price of a piece of jade jewelry until our #1 was sold.

The hue or “zheng” of high-quality jade is green, though slightly more yellow than the purest emeralds. Pure jade, such as the beads in this imperial necklace, has no hint of gray or brown coloring. 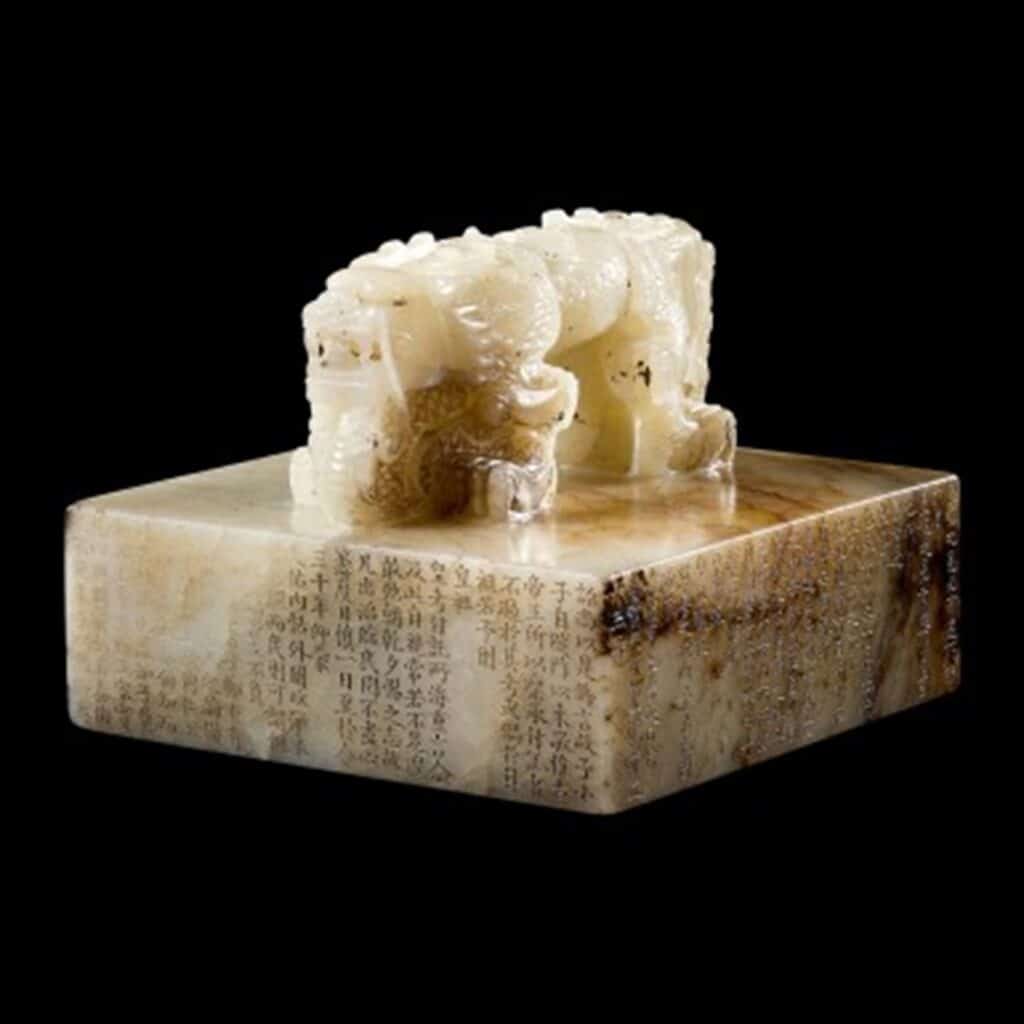 Jade is known for its characteristically vibrant green color, but white jade is sometimes just as valuable. This J’entang seal is dated to the Qing dynasty in China, back to the Qianlong period around 1766.

The sculpture on top is of two twisting dragons with their teeth and tongues out, intertwining their scaly bodies.

The sides of the pedestal beneath the dragon are inscribed with a poem known as Ji’entangji or “The Memoirs of the Hall of Grace Remembrance.”

The white jade base of the seal is mostly clear cream, the color of aged white jade. However, some parts are scarred black, presumably from a fire in the palace of one of its royal owners. 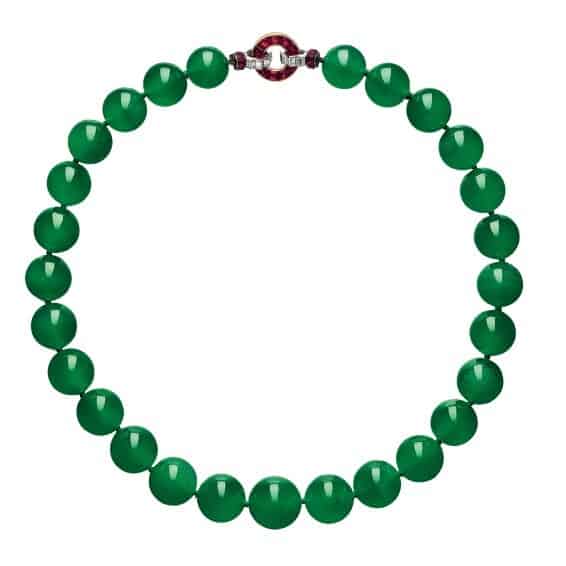 The most expensive jade is the Barbara Hutton-Mdivani Necklace Imperial Green Jadeite Necklace.

The Hong Kong Convention and Exhibition Centre hosted a huge jade sale in April 2014 called, “Magnificent Jewels and Jadeite Spring Sale.” The most amazing of the pieces sold at this auction was the Barbara Hutton-Mdivani Necklace.

The necklace comprises 27 jadeite beads with a clasp design by Cartier. It was sold at the auction for a staggering 214.04 million HKD or the equivalent of about $27.27 million, making it the most expensive piece of jade ever.

Barbara Hutton was an iconic collector of jewels, known for her love of jade. She was the heir to the fortune of the retail tycoon, Frank Winfield Woolworth, making her one of the world’s wealthiest women by the age of 21.

10 Most Expensive Snakes You Can Own