Beyblades were super popular in the U.S. during the early 2000s, but they were first released in  their home market of Japan in 1999. The Takara Tomy Toy Company was looking for its next big hit. The toy inventors had already made Transformers in the ‘80s, a toy line that has spawned an entire entertainment franchise and has had a lasting impact on popular culture.

Enter Beyblades: spinning fighter toys you could collect. When you launch the toys, they spin in quick circles and knock into your opponent’s Beys inside the battle arena.

A lot of 2000s kids remember these spinning toys, but they’re not just a symbol of early Y2K. Beyblades are still made today, and more than 120 million units have been sold worldwide.

Beyblades are pretty inexpensive — but that doesn’t mean they’re all cheap. Some designs are collectible and sell for hundreds of dollars.

Do you own a rare and expensive Beyblade? Find out with this top 10 list! 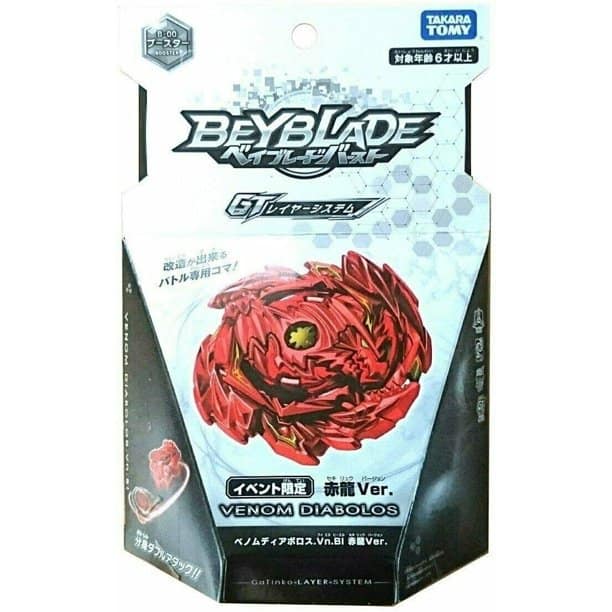 Kicking off our list is the rare Red Dragon Booster Venom Diabolos from 2019’s World Hobby Fair. The special edition Bey falls under the balance category, with its versatile design and stamina for spinning.

This isn’t the rarest Japanese Bey edition out there, but it is harder to track down than more common American versions. The design’s limited release boosts the price too.

The World Hobby Fair is a convention typically held in Tokyo. The Fair celebrates and showcases things like video games, Pokémon trading cards, and Beyblades.

Approximate Value: $70
Beyblade Type: Stamina
Design Year: 2017
Interesting Fact: This Bey could only be purchased via the Beyblade app 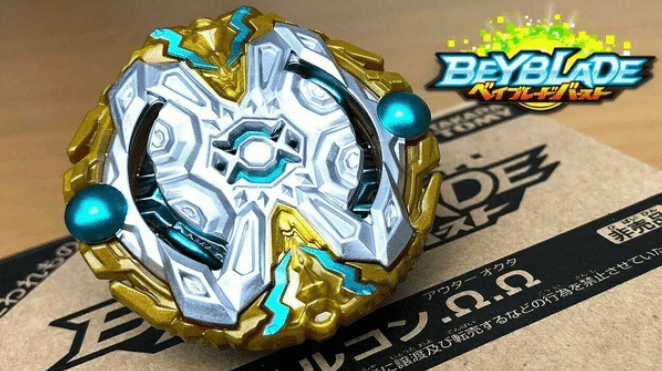 Up next is another genuine Takara Tomy Beyblade. This one’s the Gold Orichalcum Outer Burst Bey, a stamina Beyblade ready for long periods of spinning thanks to its thin tip that reduces friction.

This Bey could only be purchased by Japanese Beybladers via the toy’s app if they had enough BeyPoints. That means this is one of the rarer Beyblades on this list, and the price reflects that. This stamina Bey is valued at about $70!

There are four types of Beyblades, including stamina, attack, balance, and defense. Each blade has unique advantages that can help you win a battle. 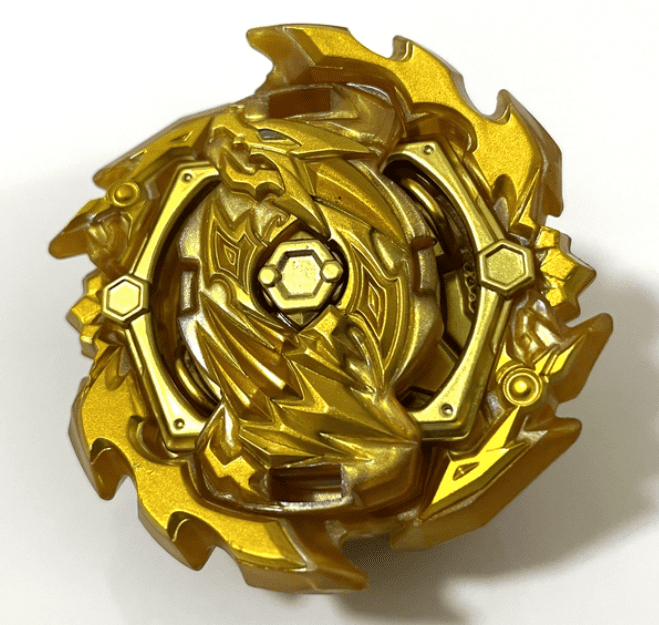 This Bey was never released in its entirety. Instead, individual components were sold during the brand’s Beyblade Burst Gold Turbo Get Campaign, a promotion in Japan.

Gathering all the pieces for this Beyblade is difficult, especially for fans outside Japan, so some Bey shops have collected each component and sell the completed attacker for about $100.

As an attack Bey, the Gold Ace Dragon is designed to move quickly and slam into your opponent’s Beys. Attack Beybaldes also generally have unequal weight distribution, making them move unpredictably in the arena.

A lot of collectible Beyblades aren’t sold with their launchers, but most of them work with traditional launchers that many Beybladers already own. 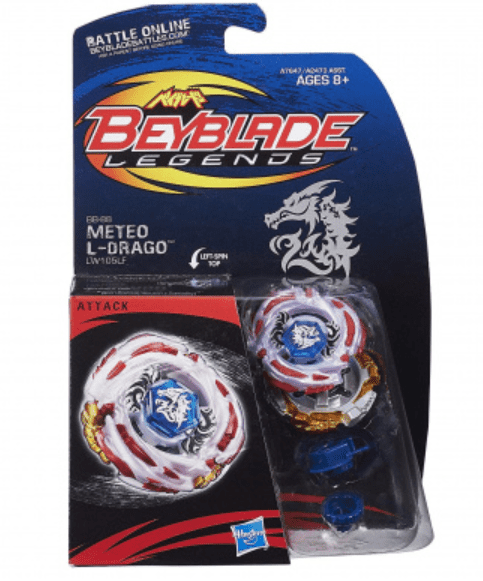 Coming in at number seven is the rare Meteo L-Drago Dark Flare. The Bey is a limited edition version of a more common Bey called Meteo L-Drago. Sellers sometimes mix up these two different Beys, but both are pretty pricey. The limited-edition version will cost you more though, mostly because only 100 were produced. Be ready to spend more than $100 on these Beys!

Beyblade toys were adapted into a popular TV show. In the show, a character named Ryuga owns this Bey. The physical toy version came out in Japan before it was released in the U.S. around 2011. 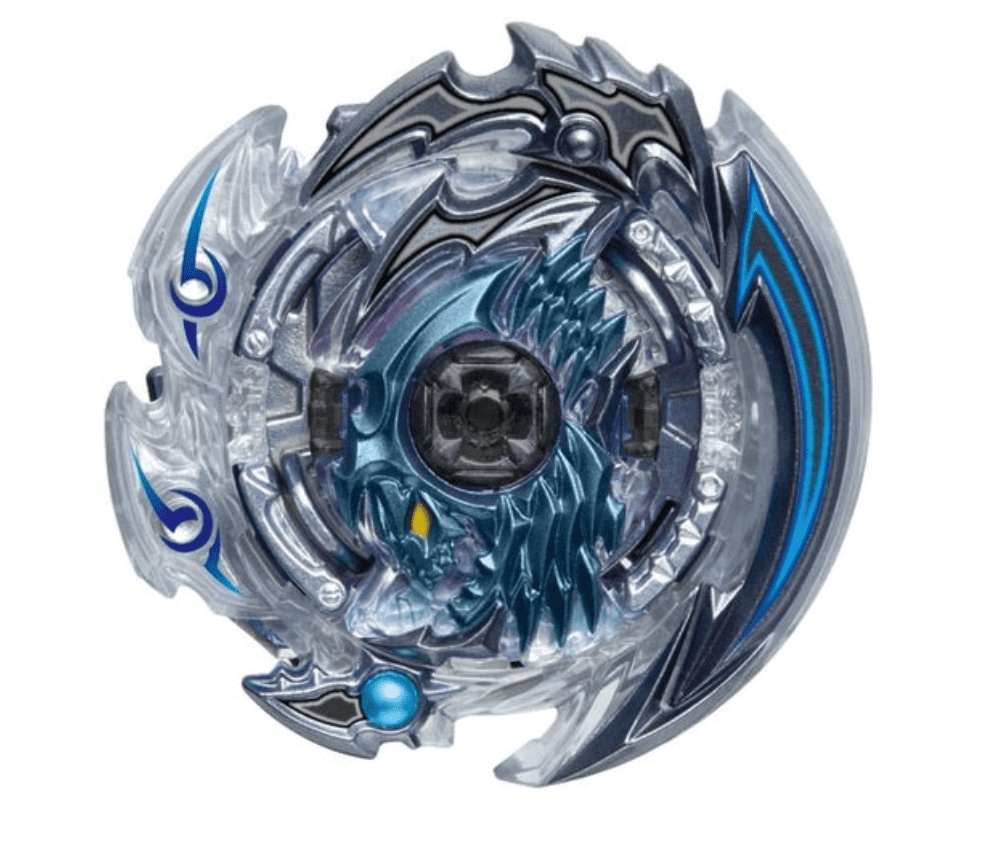 Random Boosters are mystery Beyblades that might be rare. Each Random Booster volume includes a small selection of Beys, including a limited number of “rare” and “super rare” designs. Random Booster boxes typically hold common Beys, but there’s a chance you’ll find the volume’s rare selection.

This Bey is the rare selection from Random Booster volume 23. The Beyblade was released in 2020 in Japan rather than the U.S., making it even more valuable to American collectors. Prices vary depending on the seller, but you could easily spend more than $150 on this Bey.

Random Boosters have changed over time, but original volumes had a one in eight chance of holding a rare Bey. 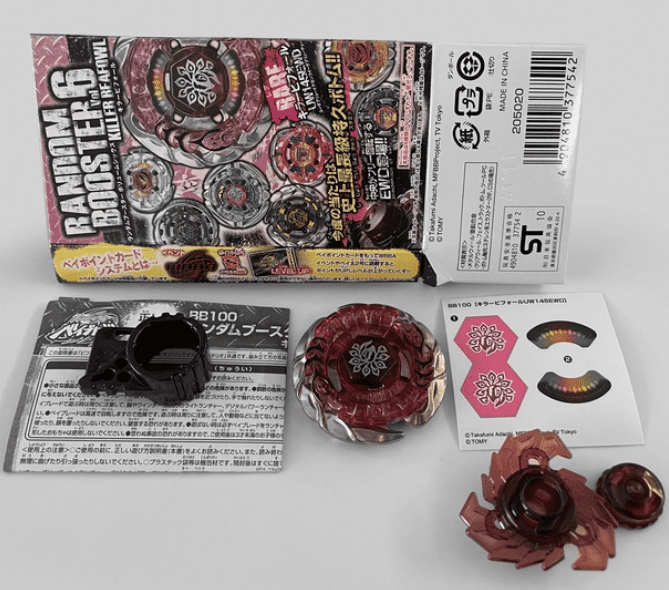 Coming in at number five is another rare Beyblade from a Random Booster volume. The limited-edition design features an intimidating look that’s ready to outlast opponents while taking down their attackers.

As a balance Bey, the Beyblade’s overall setup combines elements of the three other categories: Stamina keeps the Bey spinning quickly so it can attack longer while defense features protect the Beyblade from enemy attacks.

This Beyblade is compatible with a few different Bey lines, including Metal Fusion, Zero-G, and more. The design doesn’t work with Burst launchers though. Many sellers provide compatible launchers for an additional price. 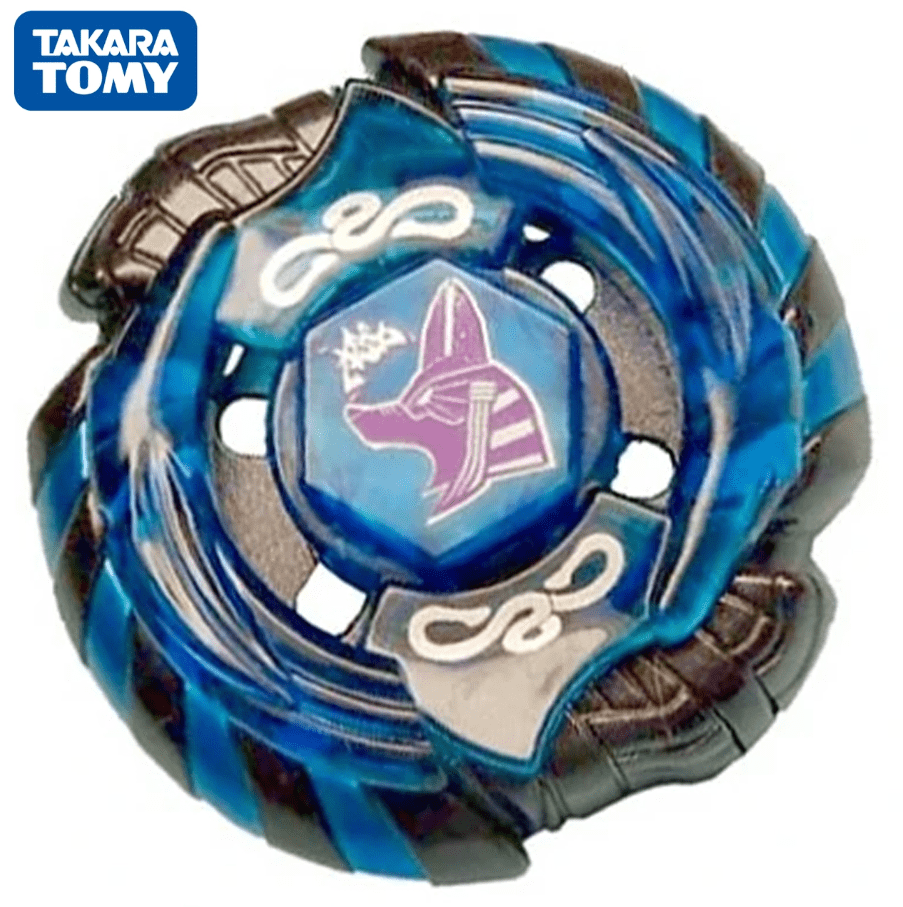 It’s really hard to get your hands on this Beyblade. When it was first released, the Bey could only be found in Japan — but that’s not all. The design wasn’t for sale, you had to win it. Beybladers could earn it by playing a limited-release arcade game called Bey Ta 1 or by winning a WBBA tournament.

Think that sounds easy? Think again. WBBA stands for World Beyblade Battle Association. Although it’s no longer active, the Association once had members all across the globe. That means you’d have to beat the best Beybladers on the planet to win this Bey.

And what about that arcade game? The game machine was only released in Japan and players had to pass five difficult levels to claim victory. Could you beat it? 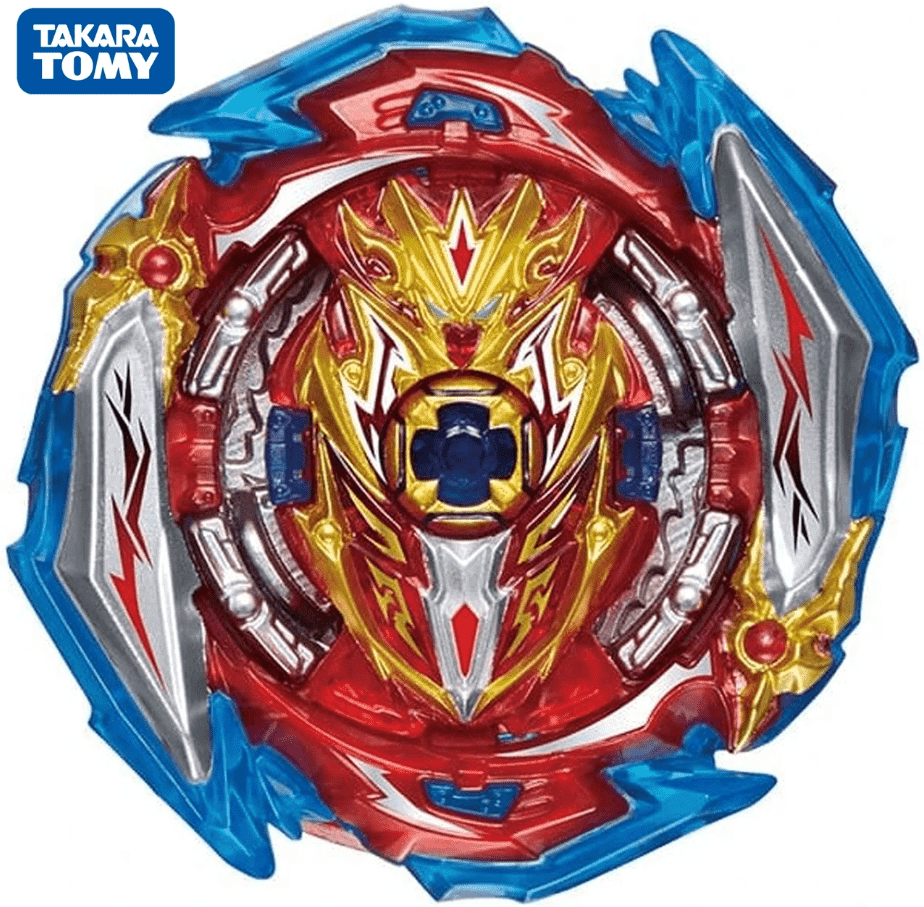 We made it to the top three! These Beyblades represent the rarest and most expensive designs ever made — check your collection, maybe you own one!

Number three is another rare selection from a Random Booster set. This time it’s volume 22, a 2020 release with a one in 12 chance of holding the ultra-rare Infinite Achilles.

On the resale market, this Beyblade goes for about $290, making it one of the most expensive Beyblades of all time. 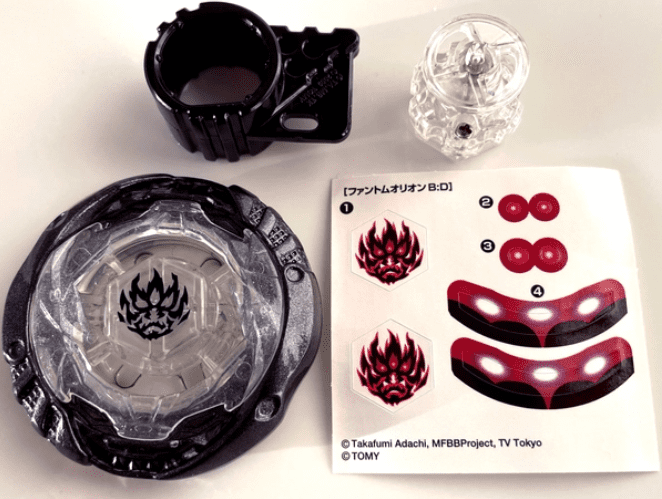 At number two is the rare Phantom Orion B:D Black Skeleton Version. The limited-edition Beyblade could be found at World Beyblade Battle Association tournaments in 2013 — but you’d have a hard time getting your hands on one. Just 100 copies were made, making this one of the rarest Beyblades ever.

Today, rare examples of this sought-after Beyblade are worth about $600. The limited-edition design will probably get more expensive as time goes on — how much would you pay for it? 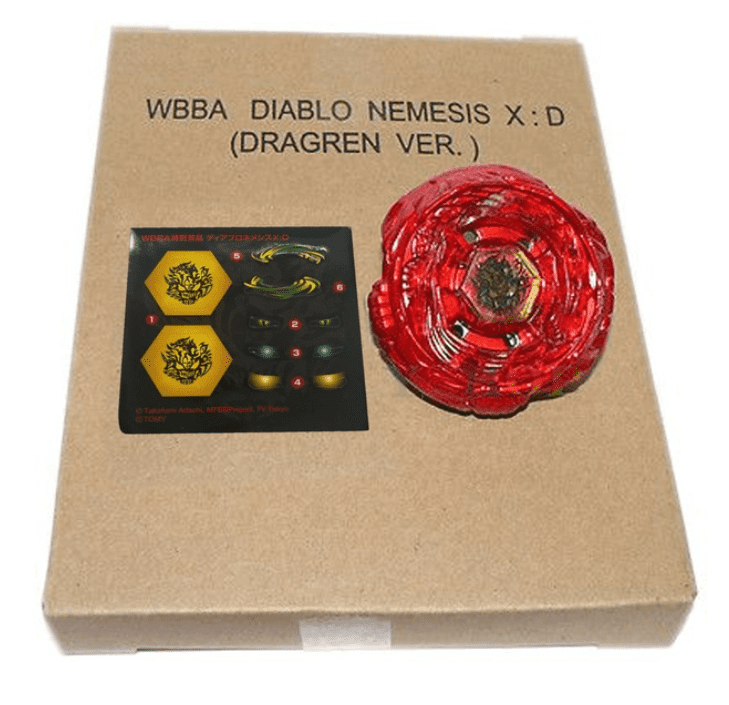 With only 100 in existence, this Beyblade is extremely rare and extremely expensive. The Bey sells for about $1,000 today, but that price will probably climb even higher in the future.

So why is this thing so expensive? Rarity plays a big role, but it’s also got a lot of cool Bey history behind it. The design was available at WBBA tournaments before the Association closed its doors, and American collector’s like the fact that it’s a genuine Japanese edition.

Would you pay a thousand bucks for this Bey?

This is a balance Beyblade, so it’s perfect for intense battles that need versatile fighters.