Here’s a quick look at their specifications:

The word penny is quite interesting. The official name of the five-cent coin is actually Lincoln cent, but a lot of people call it Lincoln penny. Way back in the time of the colonial period, people used different types of coins. In the United States, the word penny was adopted, which refers to the British penny, the smallest value of a coin in British pound. 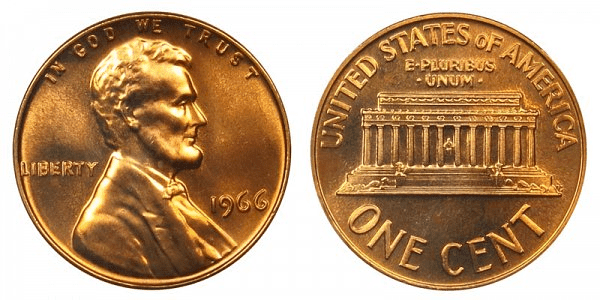 When it comes to design, the obverse includes the image of Abraham Lincoln, the 16th president of the United States. The inscriptions include the following:

On the reverse, you will find the front view of the Lincoln Memorial. The inscriptions include the following:

When the Lincoln cent was first struck, it retained the two stalks of wheat design for the reverse. Thus, it was called the wheat pennies from 1909 to 1958. It was just after that time that the Lincoln Memorial was added.

The obverse was designed by Victor D. Brenner. Originally, it was Augustus Saint-Gaudens who was tasked to redesign the cent. Regrettably, he died in August 1907 and wasn’t able to submit his design.

1909 is the centennial year of Lincoln’s birth. So, it was only fitting for him to be added to the one-cent coin. In fact, the Lincoln cent was the first widely circulated coin with a face of a president in the United States.

In 1966, there was only one US Mint that produced the Lincoln penny, which was the Philadelphia Mint. 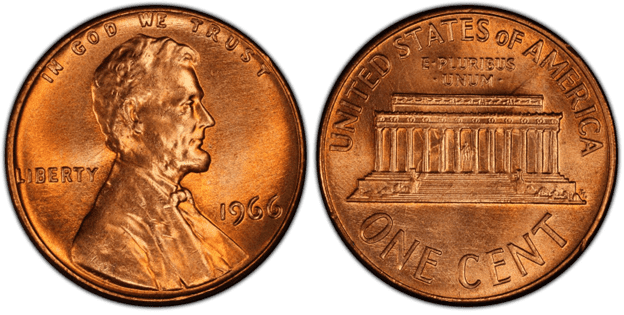 The 1966 Lincoln penny comes with various errors during the minting process. It should not come as a surprise considering that there are billions of these coins.

There are different reasons for mint error coins to come about. One of the primary reasons would be the wear and tear of the minting equipment. There are also times when accidents and human error happens.

Here’s an example of a 1966 Lincoln penny error: 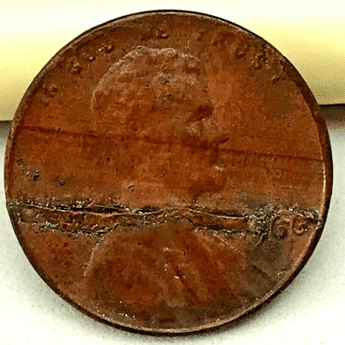 This is called the rim-to-rim lamination mint error. This happens when a foreign material or impurities such as debris, slab, and metal dust becomes trapped inside the metal planchet. Because of the impurity, it doesn’t mix well with the coin’s base metal.

Another example is this one: 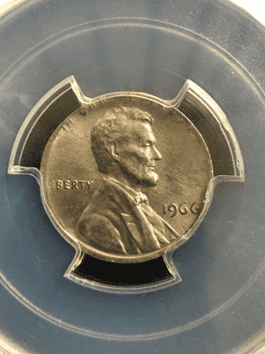 The next example is a 1966 penny with a double-struck flip over indentation: 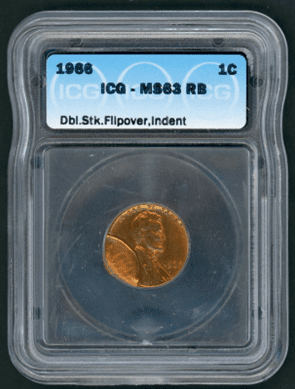 As you can see above, the coin was struck twice. This happened because the coin was not properly flipped. As a result, the strike that is supposed to be for the reverse was struck to the obverse.

Another common error is the doubled die error. This happens when the coin was struck twice by the die. The strike almost landed on the same spot with just a very small difference. That’s why doubled-die errors can be difficult to detect. However, some doubled-die errors are too obvious. You’ll see a doubling of letters, numbers, and other elements. 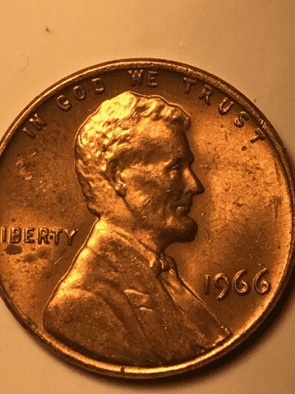 You’ll see a doubling on the words, “IN GOD WE TRUST.” Experts needed to use microscopes or magnifying glasses to find these doubling elements.

How Much Is the 1966 Lincoln Penny Worth Today?

As this might be the case, there are still Lincoln pennies issued in 1966 that are worth a few hundreds and thousands of dollars.

To give you an idea, here’s a 1966 Lincoln Penny values chart:

Are There Any Rare 1966 Lincoln Penny?

There are over 2 billion 1966 Lincoln pennies produced by the Philadelphia Mint. So, it’s not really a rare coin. However, coins with unique errors are considered rare. Aside from that, coins with grades of at least MS 66 are considered extremely rare.

Where To Buy Or Sell 1966 Lincoln Penny?

You can buy or sell 1966 Lincoln pennies in coin stores and antique shops. You can also find private collectors who may be interested in buying your coins or selling you their coins.

Some of the rarest 1966 Lincoln coins are found in auctions. Thus, you may also want to consider joining auctions and you’ll have a good chance you’ll find 1966 Lincoln pennies.

If you are able, look for local clubs of collectors. They can help you find the coins that you like. The wider your network is, the more chances you’ll have in finding your penny.

Aside from that, you can try to contact coin grading service providers. They have a long list of contacts that could offer you their 1966 Lincoln cent. Plus these providers might also have coins to sell you.

Of course, if you want to quickly buy or sell 1966 Lincoln penny, then you should try searching online. The most common websites to go to would be Amazon, Etsy, and eBay. They are free to use. Simply create an account and you should be up and running.

You can go to Google or other search engines. You can do a quick search and you’ll find websites that specialize in selling and buying coins.

Be sure that you transact with reputable and trusted people. Remember, the internet is full of people who will try to scam you. So, always do a background check.

Yes, there are rare 1966 pennies. These rare pennies are usually coins with unique errors. Coins with grades of MS 66 and above are also considered rare.

The value of a 1966 doubled-die penny may range from $10 to $700. It can be more expensive if the penny is still in good condition and has unique attributes.

How do I know if my penny is worth money?

Aside from that, you can get in touch with a coin grading service provider. They can help you know the condition of your coin and accurately tell you the value of your coin.