Coins represent little moments of history. Passed from hand to hand and used from purchase to purchase, each coin can tell a story, so it’s no surprise that coins appeal so greatly to collectors. Even without any great monetary value, the sentimental value of a coin from a year that is special to an individual can make all the difference in its value. 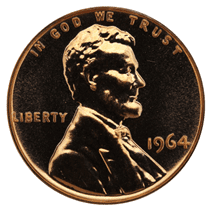 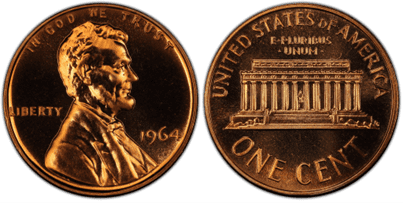 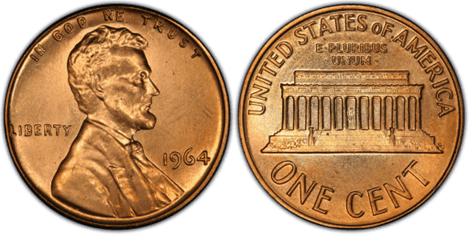 The SMS (Special Mint Set) Penny is the most valuable example of the 1964 Penny, and it comes with a pretty interesting story of why it exists. Basically, silver hoarders removed 90% of silver dimes, quarters, and half dollars from circulation in the early 1960s, resulting in a serious coin scarcity. Some officials at the United States Mint blamed coin collectors for the shortfall. To concentrate its efforts on manufacturing more circulating coinage, the United States Mint temporarily halted production of the long-popular yearly uncirculated and proof sets, and instead focused on a single collector product known as a “Special Mint Set” (SMS). In the 1960s, the Special Mint Sets had one coin of each denomination, and the SMS coins had a satin-like (occasionally proof-like) finish.

However, there wasn’t actually a full set of 1964 SMS coins produced, so while we’ll never know for sure why these coins exist, it’s possible that 1964 SMS pennies and other SMS coins were minted as prototypes for the 1965 Special Mint Sets. Or these could have been part of a 1964 Special Mint Set that included the 1964 Peace dollar. What we do know for sure is that the SMS 1964 penny is very rare and commands prices in the thousands!

So, how can you tell if you have one of these coveted coins? Here’s how to determine the difference between standard 1964 pennies and proof 1964 pennies:

The patina of the penny in question can really alter the value of the 1964 penny with graded coins being given the abbreviations BN, RB, and RD. Let’s take a look at each of these tonal variants in more detail.

BN Penny
This brown patina is the most frequent of the three; visually, it appears to be the most aged, and it is the colour that copper coins typically acquire with time. Greenish or bluish tints, which are common in this metal, can be visible in some specimens with this patina that have not been circulated very often, making it much more remarkable. 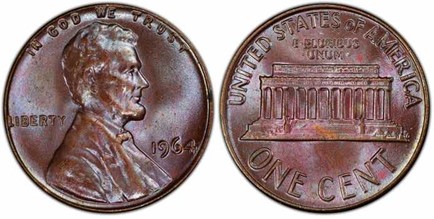 RB Penny
This is an abbreviation for Red and Brown, which means it’s a brown specimen with the typical reddish tones of a newly minted copper coin, similar to the preceding patina. It is the result of superior environmental conservation, or at the very least less exposure to humidity and oxygen than the preceding one, regardless of whether a BN has been rarely circulated but stored in a humid environment. As a result, it is a little more expensive than the preceding one due to its rarity. 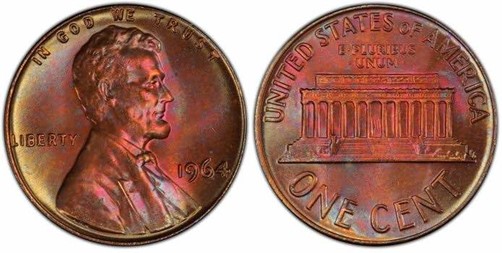 RD Penny
This is the red patina that copper tone that coins have when they’re first struck; the rarity of this patina stems from the challenge of preserving a coin with that tone for such a long time. It is the most expensive patina of the three, and collectors prize it the highest. With coins as common as these, the most unique patinas are prioritised, so a BN or RB may be discounted, whereas an RD increases the coin’s worth due to its rarity in common coins. It is critical to store our coins in a stable and controlled environment to preserve their original patina. As we’ll see below, certified capsules are an excellent choice for both this and knowing the grade. 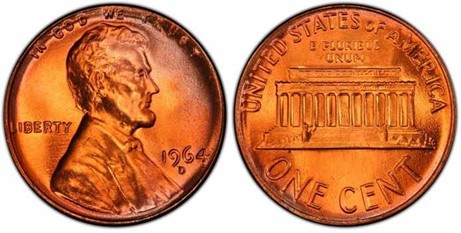 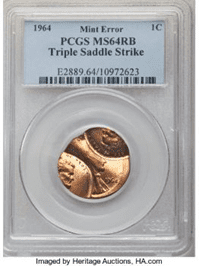 A multiple minting fault can be seen on this 1964 cent. This is accomplished by striking the original copper many times. There are actually three “Lincolns” on the same coin! Heritage Auctions sold it for $1,440 in 2020, and it was graded MS64 RB. 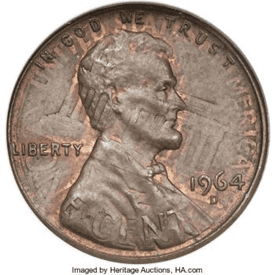 This 1964 Denver Penny was produced on top of a 1963 Denver Penny from the same mint. The Lincoln memorial is visible behind the president’s bust, and there are abnormalities typical of one mintage over another on the reverse. This MS64 BN copy was sold for $4,312.50 at Heritage Auctions in 2009 — pretty bad for a penny!

How Coins are Graded

Currency converter
Because Lincoln Pennies are still in circulation, they are more likely to be encountered in ordinary life than other rare coins.

Selling individual Lincoln Pennies online can be challenging due to the low value of most specimens, which is why employing a currency converter like Foreign Currency and Coin and Leftover Currency is one of the best choices for selling low-value historical coins.

Online Marketplaces
Because most 1974 Lincoln pennies are common and have a low value, buying and selling them on internet markets like eBay is a great and convenient choice. You can find pre-graded coins too, which can be great for starting off your collection in the right way.

Estate Sales
Coin collecting can be seen as more of an ‘older’ hobby, that’s been having a rival of late. Because of this, the collections of old hobbyists can often crop up at estate sales, and its not unheard of for individuals to get their hands on rare coins that have simply slipped under the radar. Keep those eyes peeled!

Specialist Dealers, Forums, and Auction Houses
Visiting specialist dealers, internet forums like Coin Community, and auction houses for more uncommon specimens of this Penny, mostly error types or outstanding quality coins, provides buyers and sellers with piece of mind, as the coins for sale have already been graded. If you suspect you have an SMS Penny, you should definitely take your coin to a reputable dealer, expert, or grading service for conformation.

Canadian pennies aren’t worth more than a few cents at this current time (outside of any rare or error examples). However, as this coin is now out of circulation its value may increase in coming years.

How much is a 1964 Queen Elizabeth penny worth?

Like the Canadian Penny, the UK 1964 Queen Elizabeth penny is no longer in circulation. Outside of special examples, this coin holds its value a lot better and is sold online for between $1-12 on average.

The main factor which distinguishes at 1964 SMS penny from other 1964 pennies is the overall quality of the coin. These coins have a smooth finish and are not reflective with much clearer details, particularly on the rim.