What Is the 1966 Jefferson Nickel Made Of?

The 1966 Jefferson nickel is made of 75% copper and 25% nickel. The nickel was referred to as “war nickels” from mid-1942 to 1945. These nickels were composed of 56% copper, 35% silver, and 9% manganese. The US needed to reduce the base metal content of nickel since these metals are key raw materials in producing war equipment.

Here’s a quick look at the specifications of the 1966 Jefferson nickel:

Felix Schlag was the American designer of the Jefferson nickel. He designed the coin after winning the competition held by the US Mint to find a new face for the nickel coin.

Did you know that the US Mint allowed Felix Schlag to add his initials to the coin? However, due to some misunderstanding or oversight, the initials weren’t included. It was only in 1966 that his new initials were added. 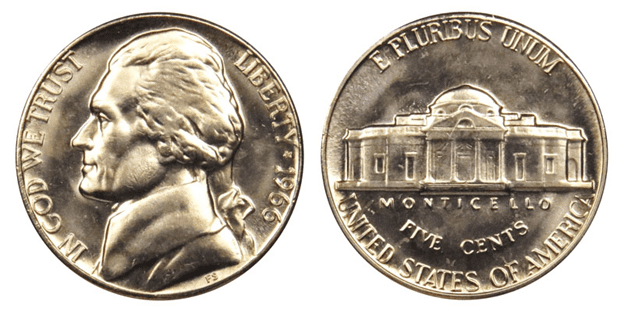 The overall design of the 1966 nickel coin is simple. You have Jefferson’s image facing the left. The inscriptions include the following:

The reverse side features the front view of the Monticello Mansion, which Jefferson himself designed and built. The inscriptions include the following:

Prior to the Jefferson nickel, the nickel is called the Buffalo nickel, which was struck from 1913 to 1938. While the Buffalo design was well regarded and accepted, it was difficult to produce. It has a high rate of die break.

According to the existing law at that time, the Buffalo nickels should be used for at least 25 years. So, even if the US Mint wanted to replace the design, they can’t do it immediately.

After 25 years of using the Buffalo nickel design, Congress moved to replace it with a portrait of Jefferson.

The Jefferson nickel had only one standard variety in 1966. Here are the specifications: 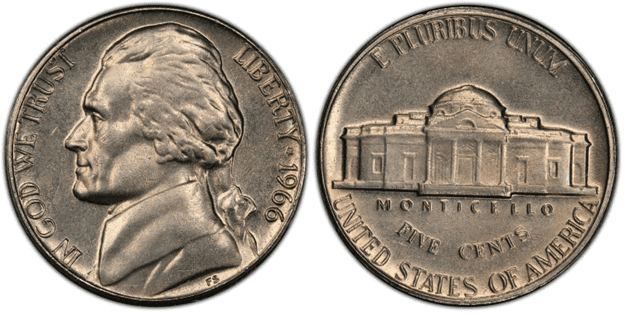 The 1966-P Nickel was struck in the Philadelphia Mint. At the end of 1966, over 156 million Jefferson nickels were produced. Price would usually range from $0.05 to $18.00. Although, there are 1966 nickels that are thousands of dollars in price.

With millions of 1966 Jefferson nickels, it is not surprising to see that there are a few of them that received errors in minting.

Errors usually happen due to problems in the minting equipment. Sometimes, errors happen due to the wrong cutting of planchets. There are also instances when human error is the cause.

Although the US Mint doesn’t want to produce any error coins, collectors are actually excited to find these types of coins. After all, error coins come in various forms. There are rare and unique coins. You never know what you’ll get.

To give you an idea, here’s an example of a 1966 Jefferson coin with doubled die reverse error: 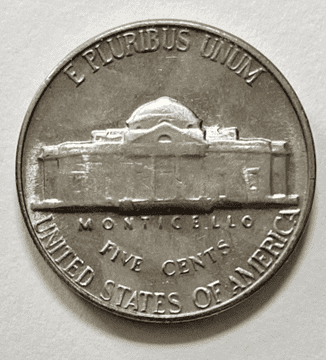 If you look closely at the upper outline of the Monticello, especially the dome and roofing, you’ll see there’s a doubling of its details. A doubled die error happens when the die struck the coin twice.

Here’s another example of an error: 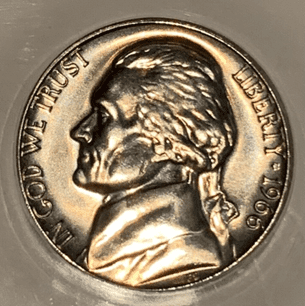 This error comes with a struck-through error. This happens when the die strikes the coin through a foreign material.

In this nickel, the pigtail of Jefferson seems to fade away: 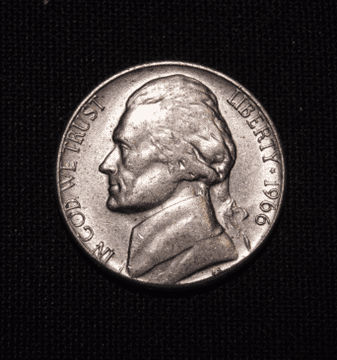 Some errors happen even before the coin is struck. In this error, you’ll see there’s a clip portion of the coin. This happens due to improper cutting of the planchet. 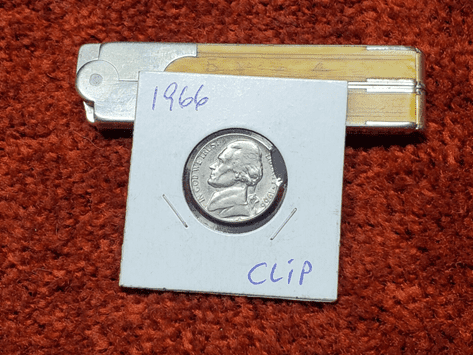 How Much Is 1966 Jefferson Nickel Worth Today?

To give you an idea of their prices, here’s a 1966 Jefferson Nickel values chart:

Where To Buy Or Sell 1966 Jefferson Nickel?

There are different places where you can buy and sell 1966 Jefferson nickels. The quickest way to find Jefferson nickels would be through the Internet. Some of the best platforms would include Amazon, eBay, and Etsy. You can also use social media platforms to find buyers and sellers.

Aside from online, you can visit coin shops or collectors’ hubs. Antique shops might also have 1966 Jefferson nickels. If you are interested, you can try to join auctions. These places are known to offer some of the rarest and most unique 1966 nickels.

Moreover, you can look for clubs or groups of coin collectors in your local area. By joining clubs of like-minded people, you widen your network. This allows you to have a better chance of selling or buying 1966 Jefferson nickels.

Do nickels have silver?

Nickels struck in mid-1942 and 1945 were composed of 35% silver. Thus, these nickels are often called silver war nickels.

It depends. There are extremely rare Jefferson nickels that carry a high premium and collector’s value. It’s worth remembering that 1966 was the first year that the designer’s initials, FS, were added.

According to some sources, Felix Schlag received two special 1966 Jefferson nickels. These two nickels were considered extremely rare and thus, it is most likely that these nickels are priced at $40,000.