What Is the 1965 Roosevelt Dime Made Of?

The 1965 Roosevelt dime is composed of 75% copper and 25% nickel. The core is made of copper while its surface is a mixture of copper and nickel.

To give you more idea, here are the specifications of the 1965 Roosevelt dime:

While the 1965 Roosevelt dime is made of copper and nickel, in 1992 to 2018, the dime was made of silver as a collectors’ version. These silver dimes weren’t made for circulation.

The 1965 dime was designed by john Sinnock. Sinnock needed to modify his design repeatedly until he met all the requirements of the Commission of Fine Arts. 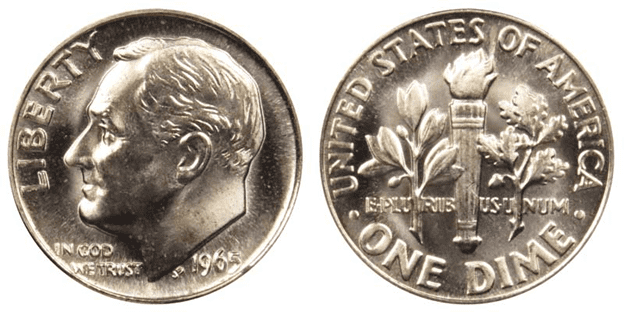 The obverse features of the left profile of Theodore Roosevelt. The inscriptions include the following:

The inscriptions include the following:

1965 is the first year when the U.S. Mint removed all silver composition from the Roosevelt dime. One reason is that people don’t spend the dime as much as they should. Some people would rather keep them as a part of their coin collection.

Aside from that, the main reason why the U.S. Mint stopped striking the silver dime was that silver is getting more and more expensive to the point that the face value of the dime is lower than the raw material it is made of.

As a result, in 1965, the U.S. Mint decided to use cheaper base metals, which include copper and nickel. Although US Mint started to produce the cupronickel dime in 1965, the Roosevelt dime has been in circulation since 1946.

When Roosevelt died in 1945, the US Mint moved immediately to honor the beloved president by adding him to the dime. The Roosevelt dime replaced the Mercury dime in 1945.

Because 1965 is the first year when the US Mint stopped using silver, there’s only one official variety of the 1965 Roosevelt dime. This is the 1965-P Roosevelt dime that doesn’t have a mint mark. 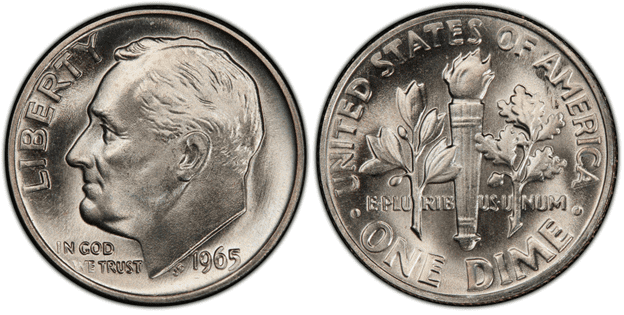 The 1965-P with no mint mark dime can be sold for up to $2.81. Although 1965 is the first year when the dime was made with base metal, some people reported that there might still be some 1965 dimes that are made of silver.

The Philadelphia Mint produced more than 1.6 billion of the 1965 Roosevelt dime coins. As you can imagine, there’s always a chance that coins made in bulk could be made with errors.

There are different types of errors and it would highly depend on what caused them. Errors can be caused by humans or minting equipment. For example, because of the repeated motion and strike, the die could wear out, which can cause a die break. When the die breaks, cracks may develop and these cracks can be seen on the coin.

Here’s an example of a die break error on a 1965 Roosevelt dime: 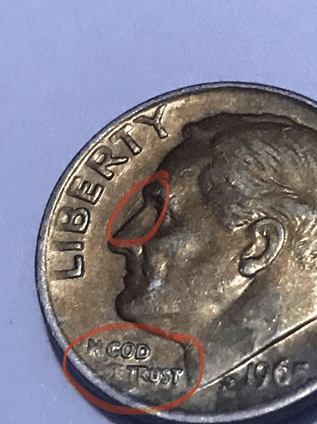 There’s also a chance that the dime was improperly annealed as shown here: 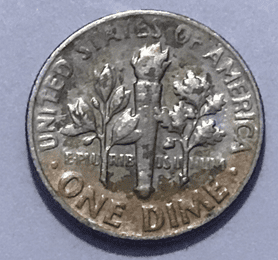 There are times that errors happen during the cutting of planchets. Sometimes, the planchets weren’t perfectly shaped like circles. Some parts are clipped or folded. Here’s an example of a 1965 dime with a clipped portion: 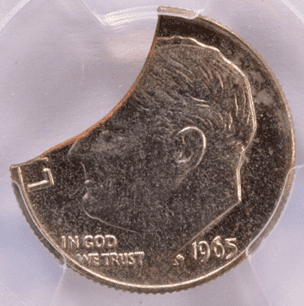 When the die strikes the planchet, it should be perfectly aligned. However, due to mechanical failure, the die didn’t hit the center of the coin. It could be because the coin wasn’t properly held in place or the die didn’t just hit the coin at the right time. 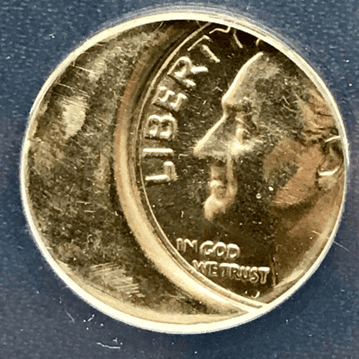 Now, there are more coin errors that affected the 1965 dime. Thankfully, they rarely occur. However, for most coin collectors, coin errors are actually what they like because of their uniqueness. So, even if coin errors are something the US Mint doesn’t want to happen, it’s still a treasure for coin enthusiasts.

How Much Is 1965 Roosevelt Dime Worth Today?

The face value of the 1965 Roosevelt dime is only 10 cents. Its melt value is $0.02. As you can see, 1965 dimes aren’t that valuable if you’re just going to look at their face value and melt value.

Nevertheless, there are still 1965 Roosevelt dimes that are worth a lot of money. Here’s a 1965 Roosevelt Dime values chart to help you get an overview:

As you can see, even if the face value of the dime is only 10 cents, if it is still in good condition and rare, it can be sold for hundreds of dollars.

Are There Any Rare 1965 Roosevelt Dime?

Perhaps, the rarest 1965 Roosevelt dime is the silver version. According to some collectors, 1965 is the year when the US Mint switched from using silver to base metals. However, some of the silver planchets end up in the minting process.

Unknowingly at that time, the 1965 Roosevelt dimes that were supposed to be struck on copper and nickel were struck on silver planchets.

This is a rare occurrence. Thus, if you find a silver 1965 Roosevelt dime, you might be able to sell it for several thousand dollars.

Where To Buy Or Sell 1965 Roosevelt Dime?

You can buy a 1965 Roosevelt dime online and in local shops. If you wish to find dimes online, you can just do a Google search. You will get tens of helpful results.

To give you a headstart, you can go to Amazon, eBay, and Etsy. These online marketplaces allow you to both buy and sell 1965 Roosevelt coins.

Aside from that, there are websites that specialized in selling and buying coins. You can find them on the Internet by simply doing a search.

Aside from the Internet, you can visit coin and antique shops. You can get in touch with coin collectors as well. If you can, join their clubs or groups. The more people you know, the more chances you’ll have to find the right place to buy or sell 1965 dimes.

The 1965 dime doesn’t have a mint mark. In 1965, it was the Philadelphia Mint that produced more than a billion 10-cent coins. This mint traditionally doesn’t add a mint mark on the coins it produced.

The person on the 1965 dime is Theodore Roosevelt. He was the 26th president of the United States. Because of his contribution to the country, he was honored by having him on the 10-cent coin.

Do silver varieties exist in the 1965 Dime?

Yes, there were reports that silver 1965 dimes exist. Some were even already sold in auctions. The US Mint accidentally used old silver planchets when producing 1965 dimes that were supposed to be struck on base metals.