1964 was an important year in the coin minting industry as it was the last year that many coins were struck with a silver composition, which changed in the following year to nickel and copper due to soaring silver prices.

With a face value of 10 cents, the Roosevelt dime has a diameter of 17.91mm, and a thickness of 1.35mm. It has a typical round shape and features reeded edges. John R. Sinnock designed the obverse and reverse designs, which are still in use today.

On the obverse, Roosevelt’s picture faces left and is surrounded by the words “Liberty” and “In God We Trust.” On the reverse, a torch is flanked on the left by an olive branch and on the right by an oak branch. Peace and power are represented by these branches.

One of the biggest milestones of 1964 was the Tokyo Olympics where a vast majority of medals were won by the US team. Dr Martin Luther King received the Nobel Peace Prize for the year, and the Beatles released their first album in the USA, starting off Beatlemania on a new continent.

All silver dimes, quarters, and half dollars issued in the United States before 1964 contain 90% silver, so if you have a coin dated on or before this year, your coin is almost certainly silver. However, to make sure you can undertake a simple step.

The best way to tell if your coins are silver is to look at their edges. You can be certain that the coin is silver if it has a solid silver stripe. If a copper stripe can be seen, the coin is clad. 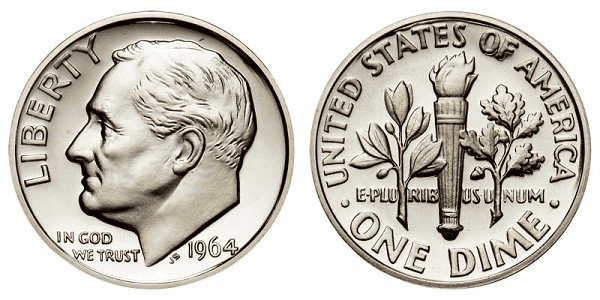 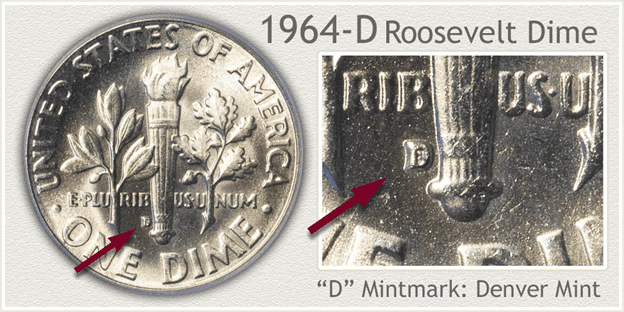 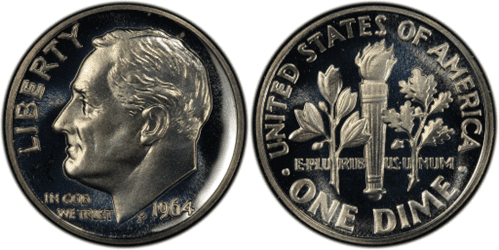 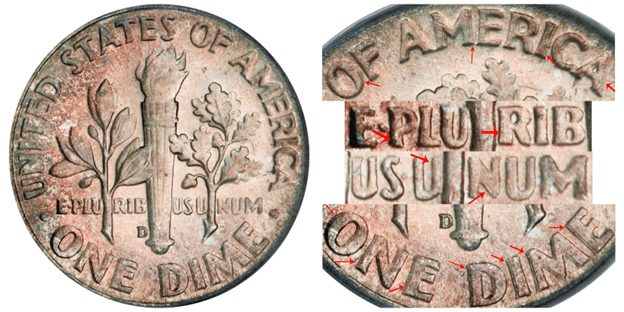 Some of the 1964 D Silver Roosevelt Dime coins had a severe flaw. On the reverse of some coins, the words “UNITED STATES OF AMERICA” – “ONE DIME” and the motto “E PLURIBUS UNUM” are somewhat doubled.

The word “ONE DIME” has the most apparent and noticeable doubling, as shown by the arrows above.

The phrases “UNITED STATES OF AMERICA” have a noticeable doubling throughout, but especially in the words “OF AMERICA” as represented.

The doubling in the motto “E PLURIBUS UNUM” is far more difficult to notice. Look for slightly bigger letters and very tiny doubling on a few of the characters, particularly in the letter “N” in “UNUM.”

The value of this error coin depends on the condition and visual appearance and can range from $6-170.

While not common, the following coin error types have been seen in the 1964 Dime.

1964 Dimes have conditional value, meaning that in order to rise about its melt value, there needs to be something exceptional about the coin such as condition or error type. With so many available, a well-preserved 1964 dime can command a premium over base silver value.

Grades are names that describe the various states that can be found on coins. The majority of coins have been worn to varying degrees. Fewer are in mint condition, which is characterized as having no wear on the surface.

With a silver weight of 2.25g, the melt value of the 1964 dime far exceeds its face value which currently sits at approximately $2.89.

The 1964 dime really isn’t one of the rarest coins out there, and a few pop up in regular circulation every now and again, making for a nice find as a near $3 melt value is a nice profit on a coin with a 10c face value.

As already alluded to, the rare 1964 Dimes are those in exceptional condition, as evidenced by the $1 starting price increase on proof coins due to the quality of the casting.

The most valuable error coin example is the doubled die error, at up to $170, but there really aren’t any stand out ‘be on the lookout’ 1964 Dimes out there.

Due to their high silver content, 1964 dimes can be bought and sold through silver dealers and pawnbrokers, and if you built up a nice collection over time, this could achieve you a pretty penny.

Mostly 1964 Dimes are sought after by beginner collectors and those who appreciate the sentimental value of the mintage year. Because of this, online marketplace such as eBay and Etsy makes a good choice for buying and selling 1964 dimes.

There’s also some interest in silver-heavy coins as a nest egg, with people purchasing when the value of silver is low, hoping to sell on when prices improve. Therefore, buying 1964 dimes in multiples is also possible, as seen in the eBay and Etsy listings linked above.

More valuable Roosevelt dimes such as error examples can be bought and sold at specialist sites such as Vcoins.

The mint mark of the 1964 dime can be found to the left of the torch on the reverse side of the coin. Of course, remember that coins minted in Philadelphia are without a mint mark.

Aside from a few specific examples, Roosevelt dimes don’t hold much value outside of their melt value.

Are dimes after 1964 worth anything?

Dimes made after 1964 don’t really have a mint value, which means all value the coin possesses comes from its conditional value such as grade or unique features.

9 Most Expensive Adidas Shoes Ever