The 1964 Quarter is special because it was the last year that the US mint minted quarters in a silver/copper composition, switching to a much more affordable and plentiful copper composition from 1965 onwards. This was because the US mint found that their silver reserves had dropped dramatically low as the value of silver increased, leading to people hoarding their silver quarters due to their metal value which exceeded the face value of the coin.
All quarter coins manufactured between 1932 and 1964 contain 90% silver and 10% copper. They are 6.25 grammes in weight and contained 0.1808 troy ounces of pure silver. After this date, all Washington Quarter coins are composed of a cladding of copper and nickel (91.67 % copper and 8.33% nickel).

The 1964 Quarter has some distinguishable design features, which are as follows:

Portrait
The portrait of George Washington, the first president of the United States of America, is featured on the current regular issue in circulation and the 1964 coin.

The portrait of President George Washington on the obverse face, as seen when held in the palms, is facing left. The sculptor for the coin John Flanagan was inspired by a portrait of George Washington created by another artist in 1786. The word LIBERTY appears above his head, while the minting date is printed slightly to the left, below his head. ‘IN GOD WE TRUST,’ which appears on the left-hand side, below the president’s chin, is also written on the obverse.

A bald eagle with long, spread wings sits in the centre of the coin’s reverse. The eagle is perched atop a bundle of arrows, which is surrounded by olive sprays. The words ‘UNITED STATES OF AMERICA’ and the motto ‘E PLURIBUS UNUM’ are displayed above the eagle. The word ‘QUARTER DOLLAR’ appears beneath the eagle, indicating the coin’s face value.

Edges
The 1964 Quarter has a ridged edge comprised of 119 reeds.

Slogans
Multiple slogans are written on the 1964 Quarter. Their meanings are as follows: 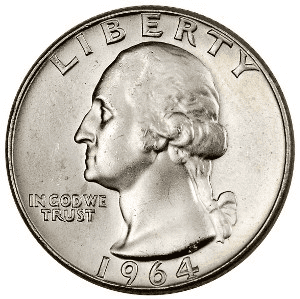 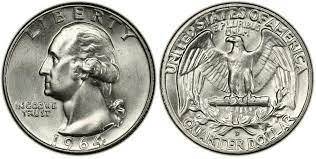 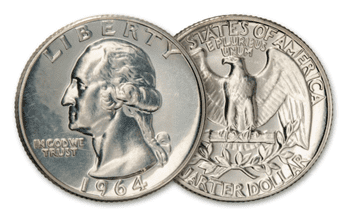 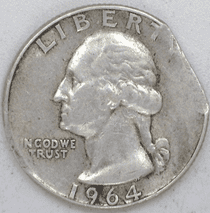 The Blakesley effect, where the opposing edge of the coin displays weakness around the rim because the metal did not fully fill the dies and collar, causes this form of clipped planchet.

The rarest examples of 1964 Quarters are those with errors that were briefly listed above. Let’s take a look at these in closer detail. 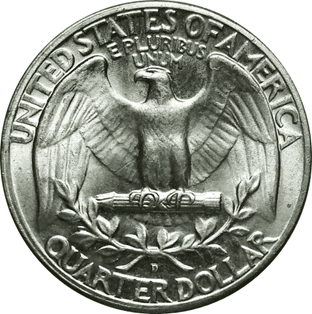 Also known as Type C Reverse, or (RDV-003), this variant of the 1964 quarter is actually an error made during the transition between silver-based coins (1964) and copper/nickel coins (1965). In this error, the silver 1964 coin has been struck using a die intended for the copper/nickel coins.
Copper and silver have different densities, which is why new dies were needed. Because of this, the Type C Reverse error appears far more detailed than its other counterpart, which is particularly noticeable on the foliage of the coin.
It is unclear how many of these error coins were created, but examples of this coin can reach upwards of $200.

A repunched mintmark happens when the letter punch that is used to punch the mintmark into the die leaves two or more offset impressions. The impressions overlap and overall the mint mark, in this case, a ‘D’ looks like it has been pressed far more deeply into the coin.
A completely separate secondary mintmark is a rarity and would command a higher price. Depending on the nature of the repunch, these coins can be worth upwards of $50.

Because of its high silver content, 1964 Quarters are worth far more than their face value (25c); in fact 16x more. The melt value for these coins currently sits at around $4.

Outside of its melt value, the value of the different types of 1964 Quarter are as follows:

Factors that affect the value of coins are mostly the condition of the coin in question, the composition of the coin (i.e silver or nickel), and the scarcity of the coin. In the next section, we’ll explore how the grading system work.

The ‘Sheldon Grading Scale’ is a 70-point scale used to grade coins.

When grading a coin, several criteria are taken into account, including the coin’s demand, intrinsic worth, rarity, general condition, whether the piece has been circulated or not, and any faults or distinctive aspects visible on the coin.

The Sheldon scale ranges from P-1 to MS-70. In the case of Washington quarters, the coins deemed in the ‘MS’ tier, will be in uncirculated condition, meaning that the areas highlighted in the image below have not been worn in any way.

For coins graded ‘Extra Fine’ (XF) you’ll see that the wear on the high peaks of Washington’s hair is obvious, as are all of the important elements. His hairline is sharp and clear, separating his forehead from his hair. The high parts of the eagle’s breast have light wear on the reverse The majority of the breast feathers are now visible. The eagle’s wings have finer details that are visible. Only the highest points of the eagle’s legs show wear.

For coins graded ‘Very Fine’ (VF) you’ll notice that three-quarters of the hairline is visible and the hairline and the forehead are separated. The hair over the ear is starting to lack detail. The eagle’s breast appears to be weathered, yet some feather details still show. 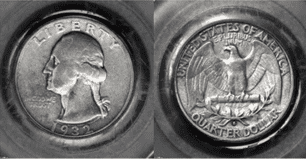 Coins that are ‘fine’ (F) will show the hair on the back of Washington’s head with some details. The rim is sharp and clear, and the characters are completely separated. The eagle’s breast and legs are beginning can be seen, but the finer details on the feathers have faded.

In ‘Very Good’ (VG) Washington Quarters the entire head is feint, though several significant details will emerge. All letters are whole and complete, with the rim detached. Approximately half of the wing feathers of the eagle are distinct and clear. The Eagle’s breast and legs are simply outlines. The wreath’s leaves are sparsely detailed, and the rim is virtually complete.

For coins that are graded ‘good’ the head of George Washington will be well-worn, with few details remaining. The letters in “LIBERTY” and the numerals in the date are beginning to blend into the rim, but they are still whole and legible. The eagle is worn practically flat, yet there is a distinct shape. The letters adjacent to the rim are worn to the point of merging with the rim, yet they are still entire.

In coins graded at AG, or ‘About Good’ The word “LIBERTY” and the date are merging with the rim on the reverse. All of the details of Washington’s head have faded away, leaving only an outline. The inscription at the rim is nearly worn smooth but still visible. The head and torso of the eagle are absolutely smooth and only an outline.

Any coin in a worse condition than AG will be graded as ‘P’ or ‘Poor’, this grade is reserved for coins which have virtually no detail left on them, and may also be heavily damaged.

There are a variety of options when it comes to buying and selling 1964 quarters, such as eBay, currency converters, estate sales, online auctions, specialist coin dealers, and even to scrap merchants for their intrinsic metal value.

Important national events such as those listed above can add sentimental value to coins from this year, and aside from any monetary value found in the coin, can be enough reason for individuals to collect coins, which is the beauty of the hobby.

What is the value of a 1964 Washington quarter?

Because it is made of mostly silver, the 1964 Washington Quarter has a metal value of at least $4.

What is the value of a 1964 Canadian quarter?

Like the Washington Quarter, the Canadian Quarter has a metal value of at least $4.

What makes a 1964 quarter valuable?

The 1964 Quarter is special because it was the last year that the US mint minted quarters in a silver/copper composition.

How many 1964 quarters make an ounce of silver?

What does it mean if a quarter has no mint mark?

Quarters without mint marks were minted in Philadelphia. Coins manufactured here are never given a mint mark unlike coins minted in Denver (D) or San Francisco (S).