Buffalo nickels are one of America’s most popular coins from the twentieth century. With an American Indian on the obverse and a bison on the reverse, they’re true Americana.

James Earle Fraser created the Buffalo nickel, which was originally struck in 1913. In 1938, the Buffalo nickel was replaced by the Jefferson nickel. These nickels had an impact on everyone in the United States. Even the homeless were affected, as they used to carve their own designs on Buffalo nickels and sell them as art. Meals, commodities, and services were exchanged for Hobo nickels.

The majority of Buffalo nickels are available in circulated grades at prices that many coin collectors can afford. There’s also the collectability aspect to these works, in addition to the romance. These coins were widely circulated throughout the 1950s and 1960s, and a few were still in circulation in the 1970s. The history, lore, and relative accessibility of assembling a complete Buffalo nickel collection appeal to both older and younger coin collectors.

Despite their silver-tone, and the fact that many coins from this era did have some silver content, the Buffalo nickel is comprised of 75% copper with 25% nickel cladding (giving the nickel its silver tone). This means the coin has very little intrinsic metal value and weighs around 0.17637 ounces (5 g). 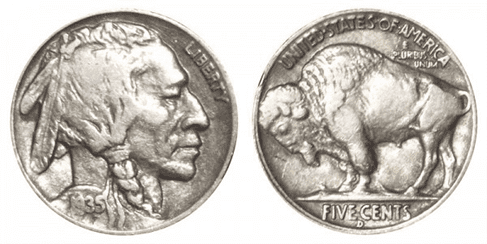 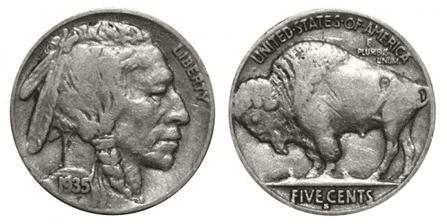 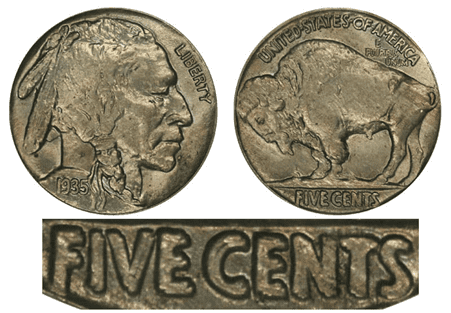 One of the most well-known mint faults in the series is the 1935 Buffalo nickel doubled die reverse. When the master hub multiplied the design component and transferred it to the leading die, this happened.

Doubling is regarded as a rarity that can cost a lot of money, as it is with other mistake coins. Only a few 1935 DDR Buffalo nickels are known to have been produced. The value of circulated coins will range from $42 to $1,667. However, specimens in immaculate condition will cost $5,462 or even $25,300 for the best-preserved examples.

How Much Is A 1935 Buffalo Nickel Worth?

Listed below are the average values for 1935 Buffalo Nickels. As you can see the value of the coin varies heavily dependent on grade. Please note, that this table doesn’t indicate the value of any error coins, as this type of coin is assessed on a coin-to-coin basis, so any generalization wouldn’t be accurate.

As you may have noticed by the above table, the value of your 1935 Buffalo Nickel is heavily dependent on grade. Below is some information which professional graders will use to assess the grade of your coin. As you can see, the difference between the grades is very noticeable. 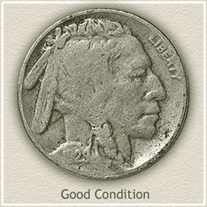 This example is defined by a well-worn coin. Although there is a normal merging of numerals, the date is readable. Further deterioration of the rim blends it with the legends’ text. On the obverse and reverse, only the most important design elements survive, resulting in a distinct flattening of appearance. The value of this coin is on the bottom end of the 1935 nickel value range. 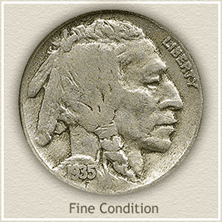 The Buffalo’s head fur has worn smooth, and a large section from the hoof to the top of the shoulder is devoid of any detail. The date is readable, despite the fact that it is one of the tallest components of the design and is vulnerable to quick degradation. The Indian’s hair and braid elements are missing. 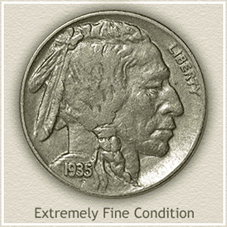 The gleam of a brand-new coin has faded from the surface. The Native American’s hair details have started to show signs of wear. On the back, look for wear in the front shoulder and upper back areas. Overall, this is still a valuable coin with a well-defined design. 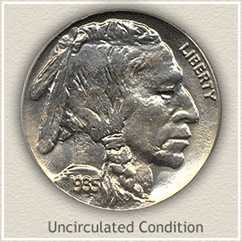 This grade is only given to coins that have never been circulated. Its surfaces show no signs of wear. On the high points of the Indian’s cheek, Buffalo nickels in this condition do not show friction from use, and on the reverse, check the top of the Buffalo’s head for any signs of wear.

Where To Buy Or Sell 1935 Buffalo Nickels?

As it is an older coin, you’re far less likely to come across a Buffalo Nickel in your pocket change; although it’s not unheard of! While options such as pawnbrokers, estate sales, and antique malls make great options for buying and selling antique coins, these options aren’t always accessible to everyone.

When selling your 1935 Buffalo Nickels, consider the following:

Many of the above options also offer buying options, so take your time to have a look and compare the offerings of a variety of retailers. To avoid counterfeit coins make sure that the coin has been graded by a recognized expert service such as the Professional Coin Grading Service (PCGS) or the Numismatic Guaranty Corporation (NGC).

Where is the mint mark on a 1935 Buffalo nickel?

The mint mark on a 1935 Buffalo nickel is found on the reverse side of the coin below the word ‘Five Cents’. If the coin doesn’t have a mint mark it was minted in Philadelphia.

The portrait on the Buffalo Nickel is thought to be a composite of three different Native Americans: Chief Iron Tail of the Oglala Lakota, Chief Two Moons of the Cheyenne, and Chief John Big Tree of the Kiowa. The Buffalo Nickel’s creator, James Earle Fraser, always said that the model for the buffalo found on the reverse of the coin was Black Diamond, a massive bison from the Bronx Zoo.

Where is the date on a Buffalo nickel?

The date on the Buffalo nickel is found on the shoulder of the Native American chief on the observe side of the coin.

How much is a 1935 gold Buffalo nickel worth?

The American gold Buffalo coin is the first 24-carat bullion coin produced by the United States Mint. When it was first introduced in 2006, it was hailed as a great alternative to the 22 carat Eagles by both investors and collectors. Investors seeking the purest certified US gold coins have been interested in the Gold Buffalo coins. Prices of these coins can start at hundred of dollars up to around $2,000.

8 Rarest Matchbox Cars That Can Earn You a Fortune