In 1967, all coins with that date were actually produced in the right calendar year for the first time since 1965.

The 1967 cent’s Victor David Brenner Lincoln design was softened down by the use of a 50-year-old obverse hub, which caused much of the fine hair, beard, and clothing details to be lost.

The only cent considered to be of worse minting was the 1968 cents. The Lincoln cent would revert to its intended sculptural elegance in 1969 when the Mint would use new hubs.

Victor David Brenner created the obverse design of the 1967 Lincoln cent, which is virtually unchanged from when the type was first produced in 1909 to commemorate 100 years since Lincoln’s birth.

Brenner’s initials, V.D.B., which were moved from the reverse in late 1909 and inserted under President Abraham Lincoln’s bust in 1918, are the primary variation between the 1967 obverse and the 1909 version.

To the right of Lincoln is 1967, and above the president is the phrase “IN GOD WE TRUST.” The word LIBERTY can be seen to the 16th president’s left.

The 1959 Lincoln Memorial reverse, which replaced the 1909 Brenner wheat stalk design, was created by Frank Gasparro and is featured on the 1967 cent. On the Lincoln Memorial’s lower right side, you can see Gasparro’s initials, FG.

The words ONE CENT are written below the building and along the rim, and the caption UNITED STATES OF AMERICA is written around the top part of the reverse along the rim.

The motto E PLURIBUS UNUM is inscribed between the top of the Lincoln Memorial and the words UNITED STATES OF AMERICA.

The 1967 Lincoln cent’s edge lacks any reeding or inscription and is plain or smooth.

Copper-plated zinc is the metal used to mint the Lincoln Penny.  The metal composition of each penny was changed in 1982 from bronze and nickel to yellow-plated Zinc with a pure copper coating on top.

The Vietnam War had already started in 1967. In addition to Charlie Chaplin’s final movie being released, the American Basketball Association is founded. The worst blizzard to ever hit Chicago hits the city.

One of the most adored presidents, along with Abraham Lincoln himself, is John F. Kennedy, whose body is transferred to an eternal resting place at Arlington National Cemetery. 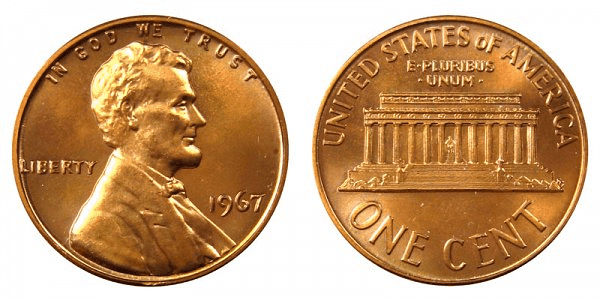 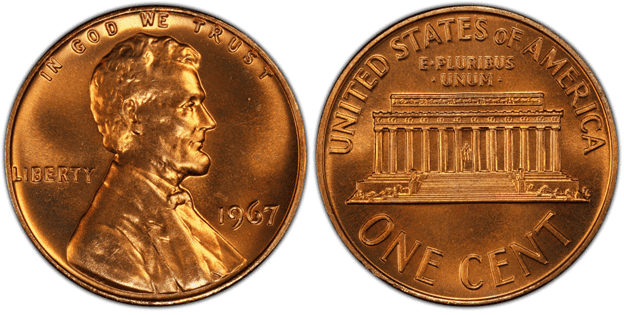 The U.S. Mint manufactured a unique type of collector coin product known as the Special Mint Set in 1967 when creating proof sets of coins was still prohibited (SMS). There were five coins in the 1967 Special Mint Set, including the 1967 SMS cent (along with similar versions of the 1967 nickel, dime, quarter, and half dollar).

These unique 1967 Lincoln pennies were made in small numbers and have a particular gloss, making them more expensive than their copper content.

There aren’t any known widespread errors seen in the 1967 run of Lincoln pennies.

Depending on the size of the fault and the niche demand from collectors looking for these specific pieces, such doubled die errors on a 1967 penny may fetch $20 to $50 per coin, occasionally even more.

Wear and tear can lead to fractures and breaks on a coin die when it is getting close to the end of its useful life or when something suddenly damages it.

These irregularities, also known as die breaks or die cracks, manifest on the struck coin as elevated lines, squiggles, or bumps.

Die crack faults can be valued anywhere from $5 and $25, depending on the magnitude and location of the die break. The kind of die crack is important as well. One of the most valuable kinds of fault are die cuds, which can be worth up to $150 or even more.

The BIE mistake is another type of die crack that only appears on Lincoln cents. The abbreviation “BIE” stands for the capital letter “I” that can be seen between the letters “B” and “E” of the word “LIBERTY” on the obverse (head’s side) of the Lincoln cent.

Small vertical die cracks, like the uncommon letter “I,” frequently appear in that exact location over the course of many years of the Lincoln cent series.

In fact, some collectors of Lincoln pennies attempt to assemble complete sets of BIE coins. Depending on its condition, a typical 1967 BIE penny should get between $5 and $15 on the open market.

How Much Is A 1967 Lincoln Penny Worth Today?

In circulated conditions, the majority of 1967 pennies are only worth their weight in copper. Each penny is currently worth around $0.02 in copper melt value. Only in uncirculated form may these coins be sold for a premium. 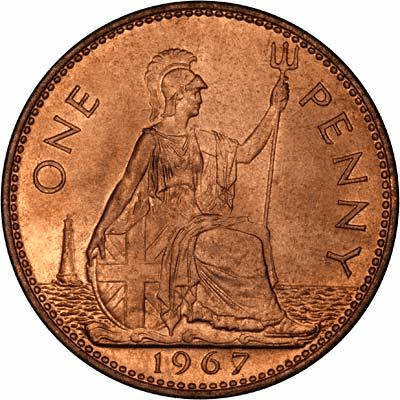 Lincoln Pennies are more likely to be found in daily life than other rare coins because they are still in use. Due to the low value of the majority of specimens, selling individual Lincoln Pennies online can be difficult.

For this reason, using a currency converter like Foreign Currency and Coin is one of the best options for selling low-value historical coins.

It’s a terrific and practical option to purchase and sell 1967 Lincoln pennies on online marketplaces like eBay and Etsy because the majority of them are common and have a low worth.

Pre-graded coins are also available, which can be excellent for getting your collection off to the perfect start.

Coin collecting may be considered to be an “older” hobby, but there’s still a dedicated group of young collectors out there. As a result, elderly hobbyists’ collections frequently appear at estate sales, and it’s not uncommon for people to acquire rare coins that have accidentally fallen under the spotlight. Keep an eye out!

The coins for sale have already been graded, giving buyers and sellers peace of mind. For more uncommon specimens of this Penny, typically error kinds or high-quality coins, visit specialised dealers, online forums like Coin Community, and auction houses.

What penny has Queen Elizabeth on it?

Both the British and the Canadian Pennies feature Queen Elizabeth II on their obverse side.

What bird is on the 1967 Canadian penny?

A frontal picture of a rock dove (or common pigeon) in flight may be seen on the centennial one-cent piece.

A “red” penny is a coin that has the red patina that copper coins have when they are originally struck; this patina is rare because it is difficult to store a coin with that tone for such a long time.

Are pennies without a mint mark valuable?

Not particularly. The largest mint in the USA, the Philadelphia Mint has never left a mint mark on its coins. This means that unmarked coins aren’t particularly rare and are quite common place.

10 Most Expensive Helicopters in the World