Many factors contribute to a coin’s value, including rarity, historical significance, and brevity of circulation. Few coins excel in all three areas, but the 1967 quarter does just that. Given its unique composition due to economic and world history events of its time, the 1967 quarter’s value represents a moment in mint history of profound significance, increasing the value of uncirculated 1967 quarters to all-star collector status. 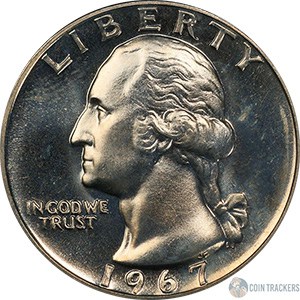 The Coinage Act of 1965 was written to deter the collection of coins from 1965 to 1967 while the United States government attempted to meet a growing need for coinage. Because the price of silver was beginning to inflate beyond the face value of coins, and because a coin shortage was underway, collectors and regular citizens alike began to hoard coins for their silver value.

But the coinage act meant that silver was no longer used to produce these coins, lowering their value to the face value of the currency itself. In addition, mint marks were removed through 1967, making the 1967 quarter the last produced without a mint mark.

Thanks to these unique circumstances, a series of quarters were produced in the years between 1965 and 1967 that represent a significant moment in mint history.

But if you can find a proof or mint condition 1967 quarter with certain errors, it can add a whopping $5,000.00 to the value of your coin collection.

Mint marks indicate the location a coin was produced. Each mint has its own mark (D for Denver, C for Charlotte, etc.), and the mark can have an impact on the value and collectability of a coin. For the United States government, a mint mark is a quality control measure, tracing errors and flaws in production.

But to collectors, this mark indicates a story, history, and moment in US history that can grossly increase the value of a coin in a collection.

Because the US was experiencing a coin shortage, the government attempted to curb collecting and coin hoarding by removing the mint mark between 1965 and 1967 until mints could meet coin demand.

Without this mark, there’s no indication of where a coin was produced, hopefully minimizing the number of unique qualities that can contribute to collector interest.

Before 1965, the mint mark on a US quarter could be found on the reverse of the coin. But after this 2-year gap in mint marking, mints moved their marks to the front of the coin.

This shift in mint mark location is significant, and paired with a gap in mint marking in general the government inadvertently created a greater demand in collecting by crafting a brief series of coins with a special unique quality.

In 1965, inflation had driven the price of silver to exceed the face value of the US quarter dollar. In response to this, the government pivoted to a nickel and copper clad composition. Thus, by 1967 quarters were no longer made of silver.

Why Were Quarters Ever Made of Silver?

Coins, in US currency’s beginnings, were tied directly to the value of the metal that represented them. They were made of pure silver or copper, and denominated by weight rather than currency markings.

But as currency gained traction as a streamlined, vital component of society, its value became tied to the national and world economy rather than precious metals.

Denominated markings were added to coins, and as the value of silver rose nickel was added to the composition of these coins to mediate cost of production.

Eventually, the government deemed it disadvantageous to include silver in the composition of quarters at all. They’re now produced, instead, using a pure copper core with nickel and copper clad.

Are There Any Errors In The 1967 Quarter?

As with most collectable coins, 1967 quarters have a list of known errors that add rarity, value, and significance to a collection. 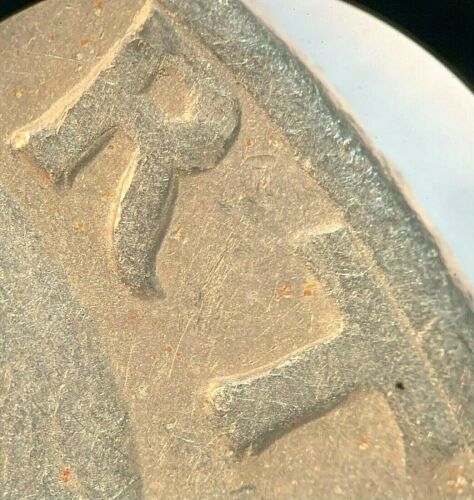 When a quarter is double died, an additional image is transferred from a previous stamping. Spotting this in a 1967 quarter typically requires magnifying equipment and a trained eye. The 1967 double die quarters are typically affected in the imprinted words. 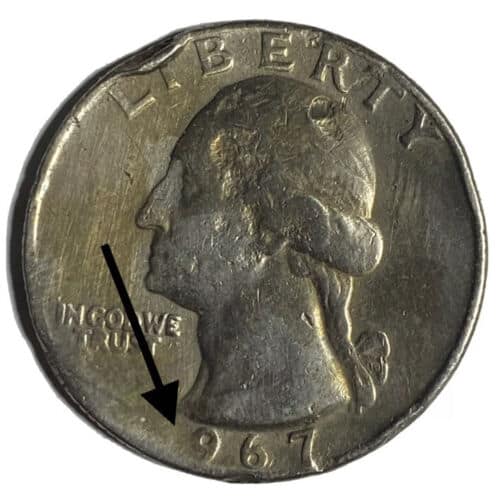 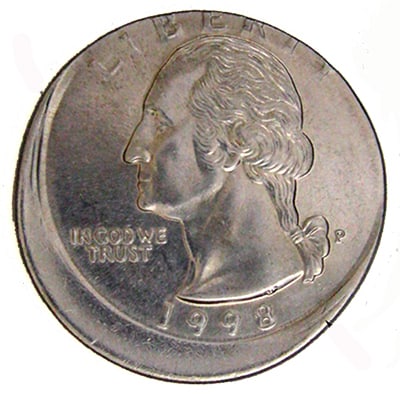 This error is exactly as its name implies: the stamp was applied off center. Because these are so rare they are pretty valuable. 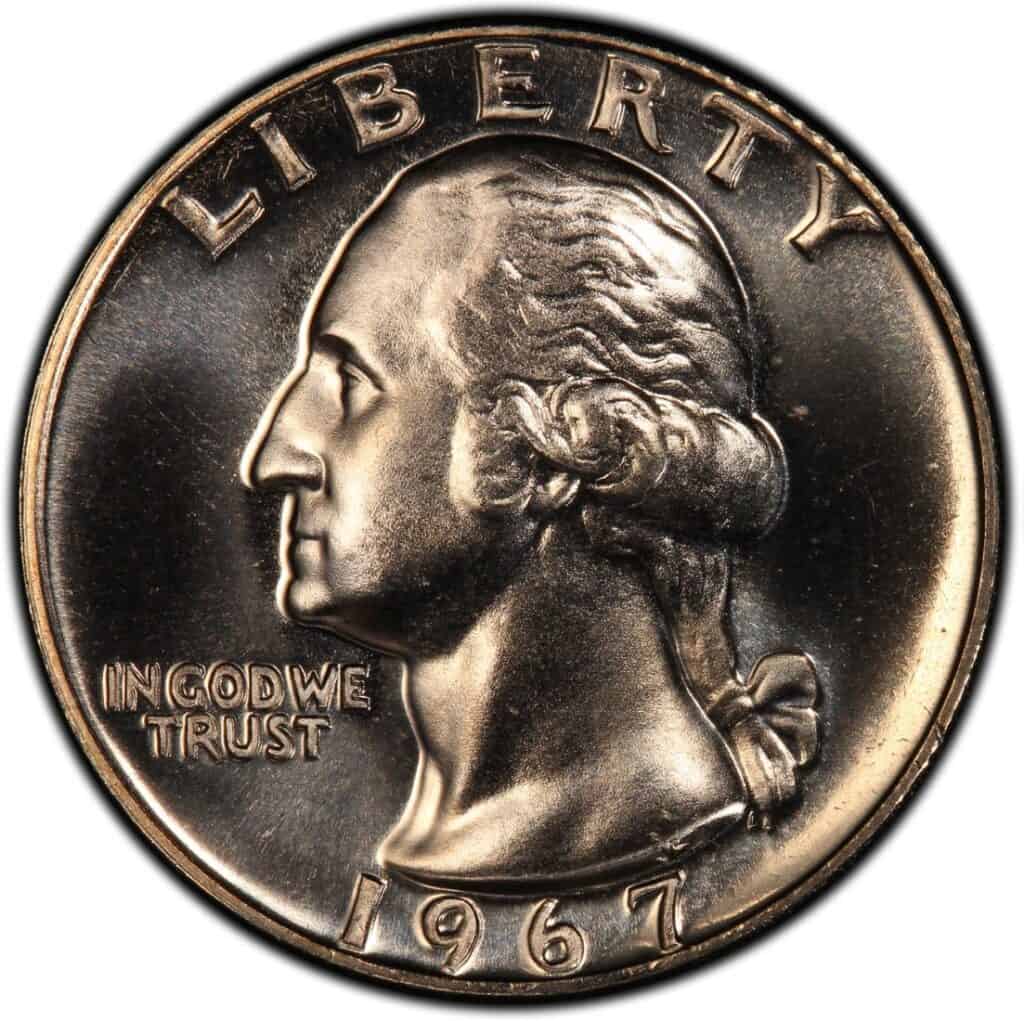 A rim oddity describes a misshapen rim that occurs in mint production, rather than by blunt force damage at the mint or in circulation. These errors can significantly increase the value of the 1967 quarter, depending on the coin’s condition. 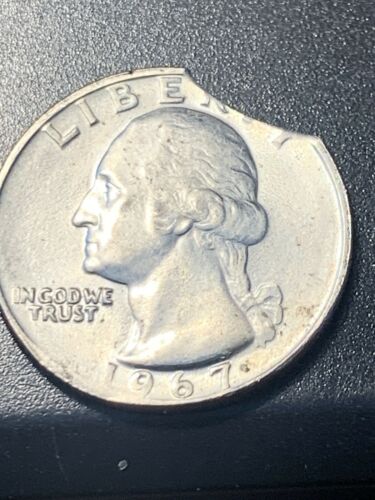 A clipped planchet is an error in stamping that occurs when the plate is slightly misplaced, resulting in a curved portion missing from the quarter entirely. This is a rare error, and a quarter with this oddity in mint condition can fetch a small fortune.

As with most collectibles, the Washington Quarter is graded based on wear and tear. Mint-condition quarters receive the highest grade, while worn and circulated quarters receive a low grade.

Because coins below a grade of VG-8 rarely fetch more than face value at sale or auction, we will not evaluate them in depth here.

VG stands for Very Good, and indicates that the coin is still in decent condition. F indicates “fine”, a step above VG. VF is Very Fine, EF is Extra Fine, and Almost Uncirculated which indicates that very little damage occurred in circulation. But MS indicates a coin that is in Mint State, the highest of ratings.

Within these categories, coins can range from 1 to 70, with 70 being the highest condition.

VG-8 signifies a quarter that’s been circulated, has a good bit of wear and tear, but is still somewhat legible and identifiable. 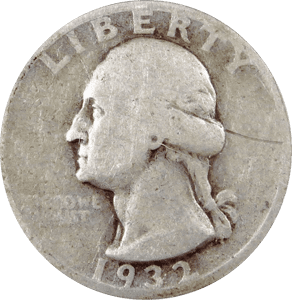 F-12 coins have been circulated, but still show some detail to the coin. Errors can be spotted if present, and most small words and objects can be deciphered. 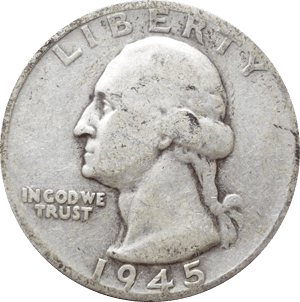 Both sides of this grade shows wear and tear, but almost all details can be made out. All words can be read, and the mint mark is visible, if present. 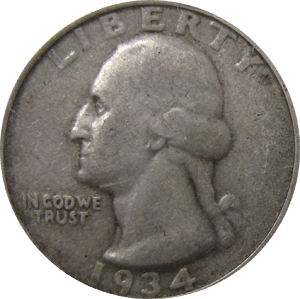 While these coins have wear and tear, the original luster is shown. Only the most raised points on the quarter show wear, and the original design is fully noticeable.

In AU-55, the coin is barely circulated. While it has been used in circulation, this has had little to no impact on the quality of the coin. Wear and tear is only visible using coin grading equipment, and the original sheen is present. 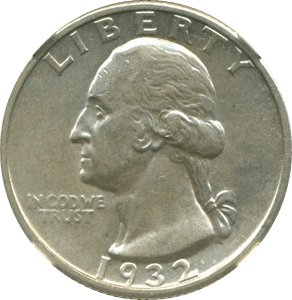 MS stands for Mint State. MS 63 coins have only hairline wear, and look to be in perfect mint condition to the naked eye. 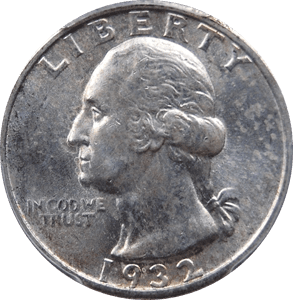 In MS-65 quarters, the only wear and tear comes from careful handling. These have not likely ever been circulated. They are almost perfect. 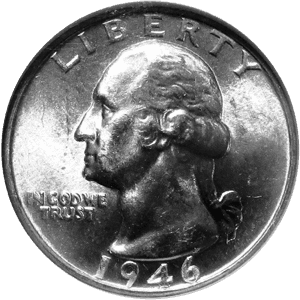 If a quarter receives a grade of MS-67, there is no all over wear and tear, even under a microscope. There are only 2-3 hairline imperfections on the whole coin. 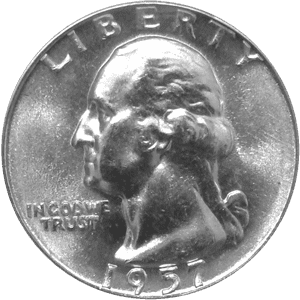 Virtually no coins receive this high a rating, and if they do they will fetch the highest price. To receive a rating of utter perfection, a coin would have never been handled by a person and would have been transferred to protective, collectable packaging immediately from mint. There has never been a professionally identified MS-70 1967 quarter.

What are the most valuable 1967 quarters?

Where to buy and sell a 1967 quarter? These can be found in circulation if you ask a bank teller for a customer-rolled box of quarters, but you’ll have to hunt. To buy graded, evaluated 1967 quarters check sites like Ebay.com for certified collectables. Auctions may also pop up near you from time to time, which you can locate by joining collectors’ guilds and checking auction sites.