What Is The 1964 Jefferson Nickel?

The 1964 Jefferson nickel coin was designed in 1938 by Felix Schlag when it replaced the Indian head nickel. The coin is made of 75% copper and 25% nickel and has a total melt value of $0.0567, it weighs 5 grams and is still used in commerce today.

The obverse side of the 1964 Jefferson Nickel features a left-facing bust of President Thomas Jefferson, which includes a colonial-era pigtail and is near identical in detail to Jean-Antoine Houdon’s 1789 bust.

Starting from Jefferson’s chest and extending to his hairline, the slogan IN GOD WE TRUST–which became the national motto in 1956–arcs clockwise along with most of the left side of the coin.

Behind Jefferson, the letters LIBERTY and 1964 run clockwise around the right side. A little five-pointed star separates the two inscriptions.

A front image of Monticello, Jefferson’s estate near Charlottesville, Virginia, appears on the reverse. The flattened representation loses much of the building’s dimensionality, but the octagonal form of the dome can still be seen, and better strikes expose significant detail in the steps and portico.

The phrase E PLURIBUS UNUM (“Out of Many, One”) appears on the reverse. The name MONTICELLO appears in a straight line directly beneath the structure. The words the UNITED STATES OF AMERICA run counterclockwise down the bottom edge of the coin, and the number FIVE CENTS creates a gently curved line beneath it.

Designer Felix Schlag’s initials did not appear on a Jefferson nickel until 1966, which is interesting.

The Nobel Peace Prize was granted to Dr. Martin Luther King, Jr., and the most violent earthquake in US history struck South Central Alaska in 1964.

While many coins up until 1964 did have up to a 90% silver content; such as the half dollar the 1964 nickel doesn’t contain any silver and gets its silver tones from the 25% nickel cladding in its composition.

There are Jefferson nickels which did have a 35% silver content, but these were dated between 1942 and 1945. 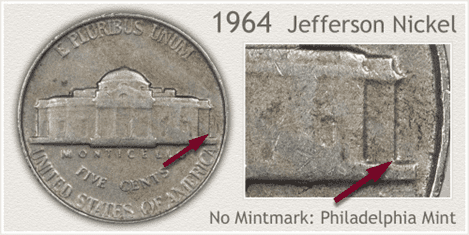 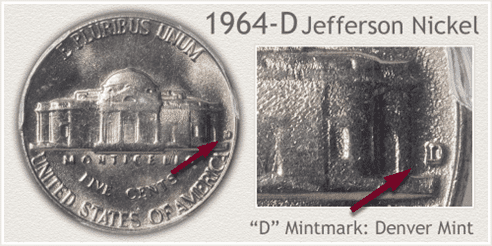 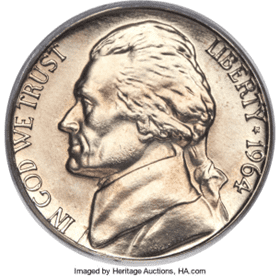 The 1964 SMS nickel is among the rarest of all Jeffersons, and its coinage was unknown to the collecting public for nearly three decades after it was struck.

The first known auction appearance of an example was in Stack’s Public Auction Sale in 1993.

Today, fewer than two dozen 1964 SMS nickels are believed to be known, with a PCGS-certified population of just 19 coins.

The motto E PLURIBUS UNUM appears on U.S. coinage. Most people are familiar with it, even if they aren’t sure what it means (it’s a Latin phrase that means “out of many, one,” and it means “out of my states, one nation has been fashioned in this land).

Familiarity, on the other hand, frequently begets inattention. That’s why when 1964-D Jefferson nickels arrived with PLURIBUS misspelt as PLURIDUS, many collectors didn’t notice at first.

The core of the letter “B” had completely erased due to the heavy polishing of one or more dies, resulting in this fascinating defect.

Other 1964 Nickel errors are singular flukes of the manufacturing process, but still are interesting to look at such as the examples below.

The 1964 Nickel Struck on 1C Planchet Error is a reddish-colored penny with a nickel-like appearance.

Then there’s the 1964 Struck By Error, which is a common occurrence. When a foreign object is brought into the minting process, this error occurs. A piece of fabric was lying on the nickel planchet when it was struck in the case of the image attached.

There’s also the 1964 Double Strike Nickel Error, which occurs when the die strikes the planchet two or more times. If the planchet is not properly ejected, the coin will be struck again, and if the error is not detected, then it will be allowed into circulation.

The below table indicates the pawnbroker values for standard-issue, ungraded examples of Jefferson nickel.

Graded Jefferson Nickels can have a higher value, as evidenced below:

You can assess whether your nickel is worth closer investigation or even grading by exploring the following features:

Look for the following to establish the coin’s value:

To put it another way, if your nickel contains five full steps and unique minting mistakes, it will be valued far more than a standard 1964 nickel.

The term “Full Steps” refers to circulation strike Jefferson Nickels with at least five full steps visible at the base of Monticello on the reverse. The label is used to identify coins that have been fully struck in general.

There is a wide variety of sought-after 1964 Jefferson nickels, and here’s a rundown of some of the most valuable examples:

This FS kind (excellent minting and preservation of President Jefferson’s residential building’s entrance stairs on the back) is extremely rare.

Despite the fact that over one billion were produced in Philadelphia, obtaining a copy of the FS (“Full Steps”), which is extremely valuable and sought after, is quite difficult.

The reverse of a 1964-D Jefferson Nickel variant has a very obvious double minting that is plainly visible to the naked eye – for example, at the mint mark.

Nickels from 1964 can be bought and traded in a variety of ways. You might even find one or two in your pocket change because they’re still in circulation.

Of course, for basic, circulated coins, eBay and Etsy are excellent sources.

If you’re new to coin collecting and think you might have a rare 1964 Nickel like the ones described above, it’s always best to be safe than sorry and get your coin evaluated by an in-person or online professional.

As you know, the valuation of coins is very subjective and prices can swing from high to low based on the smallest of details. The highest value recorded for a 1964 D/D nickel is $4,015.

Are nickels worth more melted down?

The 1964 Jefferson Nickel has a melt value of $0.0567, which is less than a cent over its face value, so melting down these coins is more money than it’s worth.

How much is the 1964 Jefferson nickel at the pawnshop?

Outside of uncirculated coins, which can be worth a few bucks, most 1964 nickels are only worth their face value when sold at pawnshops.

The Special Strike of 1964 Jefferson Nickels is known for having a very sharp strike as well as sharp and square edge rims. In general, the overall quality and clarity of the strike are greater than standardly struck coins.

10 Most Expensive Work Boots You Can Buy