9 Most Expensive Types of Agate You Can Buy

Agate is a generic term for a range of banded natural stone that comes in many different colors and patterns. It can be found worldwide but has been discovered in some of its most beautiful forms in locations such as Northern Europe and the United States. The fascination with this gemstone dates back to Roman times when agate was considered a symbol of good fortune and healing.

Agate is mentioned several times in Greek mythology as a protective stone that will guard its wearer from evil. In recent years, the demand for high-quality agate has increased substantially, creating scope for more sophisticated types of agate to emerge on the market. So what are the most expensive types of agate? 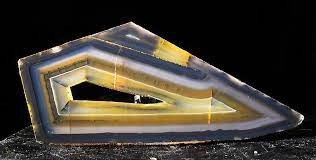 This unique structure, known as polyhedroid agate, comes in various triangle- and quadrilateral-shaped straight-line configurations. The fact that it is an amorphous mineraloid rather than a mineral, however, means that these forms do not accurately depict the “cleavage” quality of a crystal.

The straight walls of the voids, where the siliceous groundwater eventually hardens, are represented by geometric forms as opposed to curves. These agates are distinguished by their elongated geometries. The spaces of a box work of calcite crystals are where they are believed to have grown.

These extraordinarily formed agates were left after the calcite subsequently disintegrated. 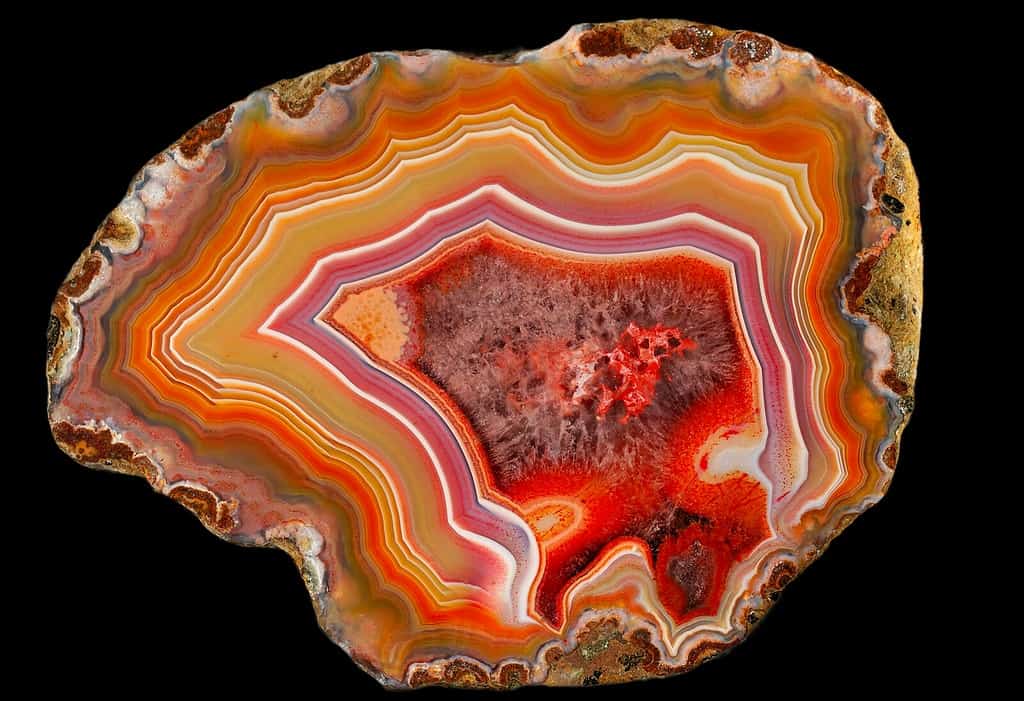 Like the Plume stone, stones of the Condor kind may display the complete color spectrum. This agate does, however, exhibit banding in a circular pattern, unlike the Plumes. Condors frequently have many bands, each of which has a distinct hue, creating the appearance of a stunning rainbow.

One ton of good agates would typically be produced in the early years of condor agate collecting after a typical month of work. To meet the current demand for these gems, more work is required because excavation is needed to find the agates.

The first time they appeared, the agates were discovered loosely dispersed throughout the landscape and were quickly and extensively harvested.

In the cold agate fields of Mendoza province, Argentina, where surface collecting is no longer common, these agates are now obtained through shallow diggings. 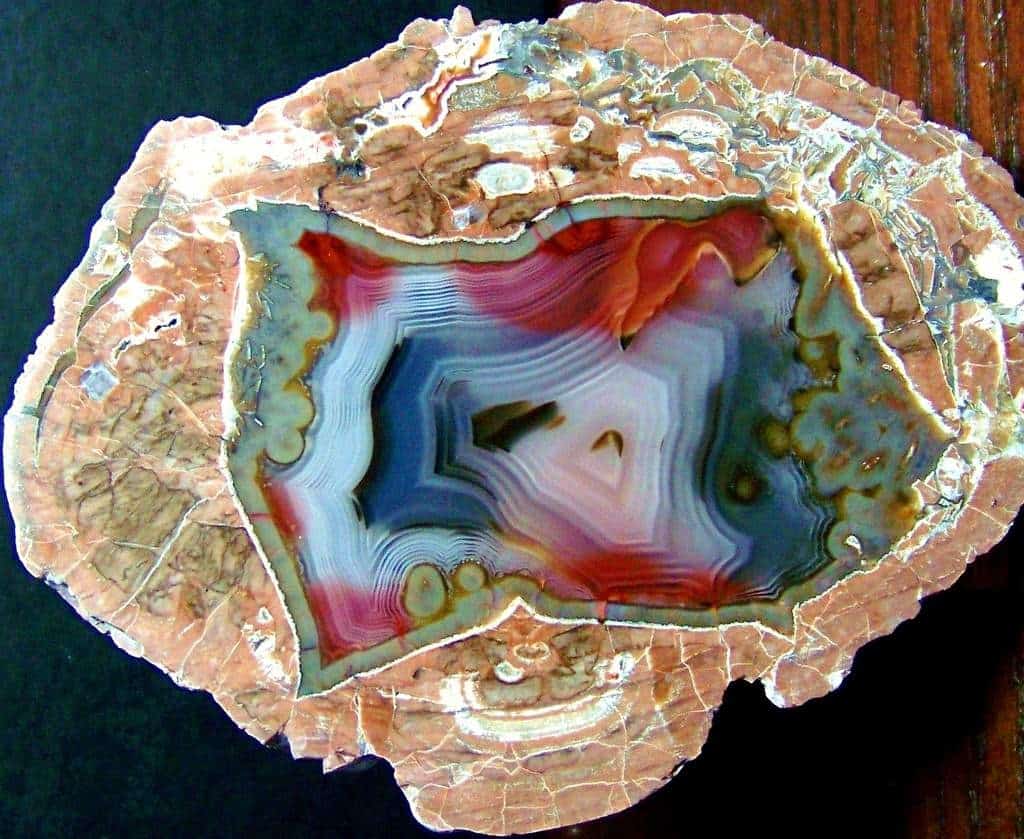 In different locations around the Western United States, you can find agate-filled nodules known as thundereggs. From a quarter of an inch to five feet in diameter, they come in various sizes. They usually have an orange-sized size. No two are comparable in pattern, design, or color on the inside, yet all have a similar exterior.

They do not exhibit the same bright color and gem quality in other locales. Only one of every twenty cuts makes remarkable examples, despite their superior quality. In addition to their vibrant colors, these depict beautiful images from dreams of the land and the sea that provide the impression of depth and spatial distance.

Thundereggs that have been cut and polished are stunning. They are cherished and sought all over the world and are considered one of nature’s wonders.

From a tiny region in Jefferson County in Central Oregon, the most vibrant and stunning Thundereggs can be found. 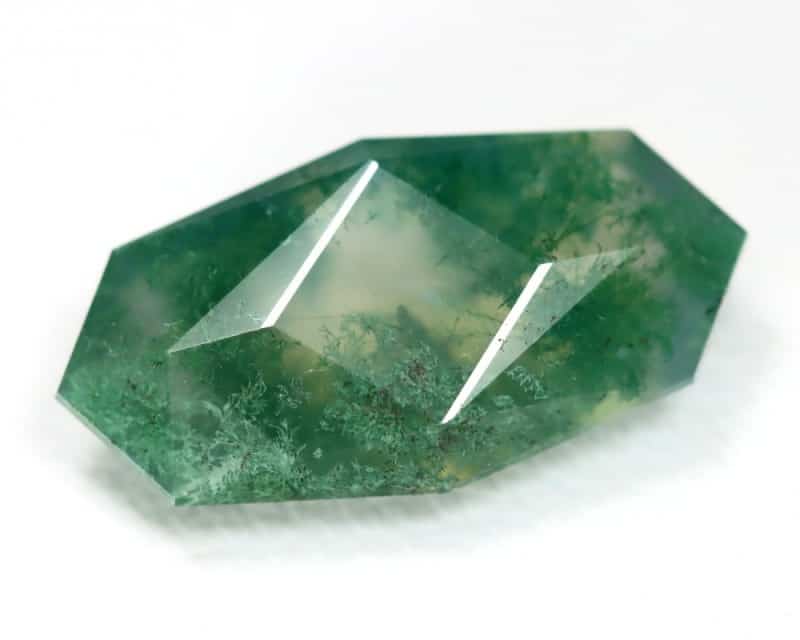 The gemstone moss agate, often called a mocha stone, is well recognized for its greenish filaments that mimic spreading moss or other types of flora. The other name refers to the historical source of the gemstone, the Yemeni city of Mocha in Arabia. However, there is considerable debate about whether these gemstone names may be used interchangeably.

Some people contend that only certain types of moss agate with a brown or red hue should be called mocha stone. Like other precious stones, moss agate has long been used as a form of adornment. Moss agate was regarded as a medicinal stone by several early civilizations.

Moss agate was commonly recognized as a lucky stone in Britain until the late 18th century. 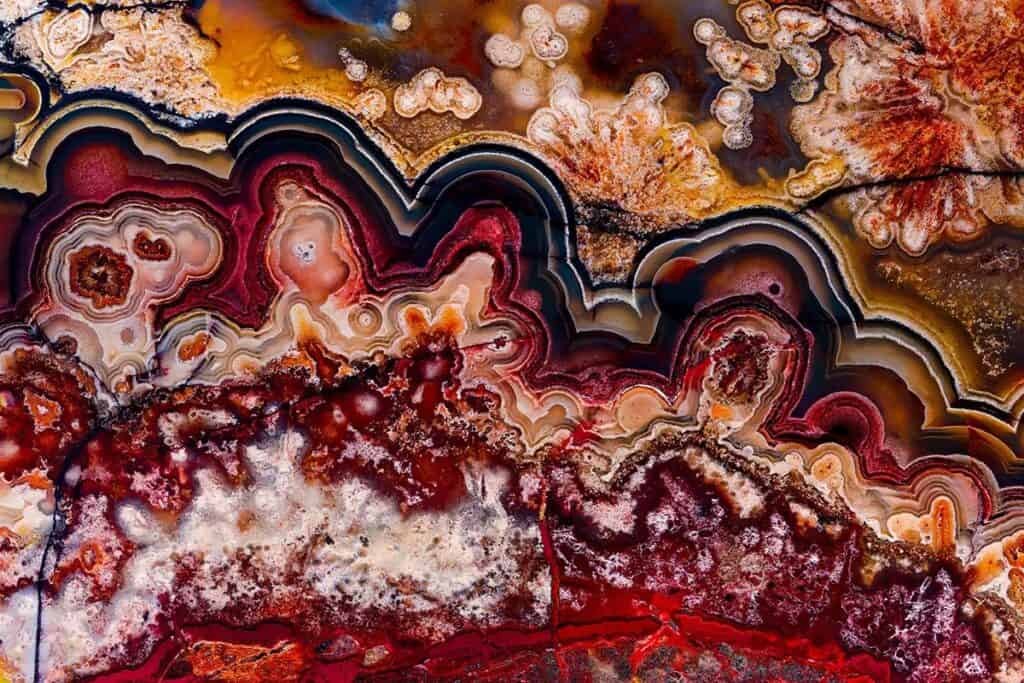 Crazy lace agate, commonly referred to as Mexican agate, is a microcrystalline quartz banded chalcedony that is loaded with iron and aluminum. It frequently has vibrant colors and intricate patterns. This results in the stone’s swirled mixture of creamy browns, blacks, greys, and gold (as well as sporadic pinks or reds). This stone can be found only in the northern Mexican region of Chihuahua.

It is thought that crazy lace agate was produced between 65 and 90 million years ago, during the Cretaceous era. Crazy lace agate is only found in Mexico. Therefore, it preserves a lot of the energy of that country, especially the tribal energies of long-ago civilizations that are still shrouded in mystery.

It is believed that the early people of Mexico used this agate as an amulet representing perseverance and bravery in combat. 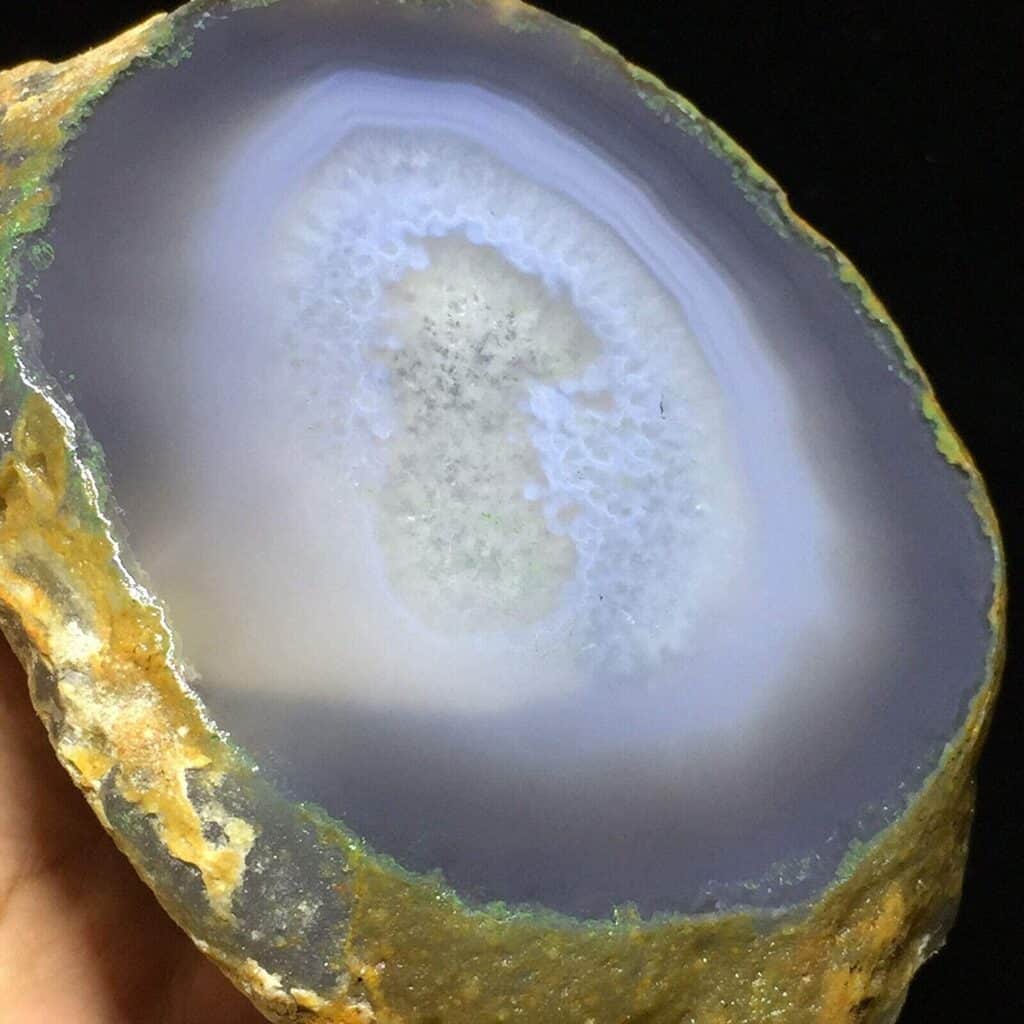 Water that has been trapped inside a nodule, agate, or geode is called an enhydro agate. A bubble of water that has been trapped inside the rock for about 200 million years can be found in the center of this little, greyish-stone lump, which makes it both incredibly uncommon and intriguing. Debris or petroleum can also be found in enhydro agates. Enhydro or “enhydrous” agate is the scientific name for this formation.

This specific kind of chalcedony is often found in Brazil and is banded in light grey and white. 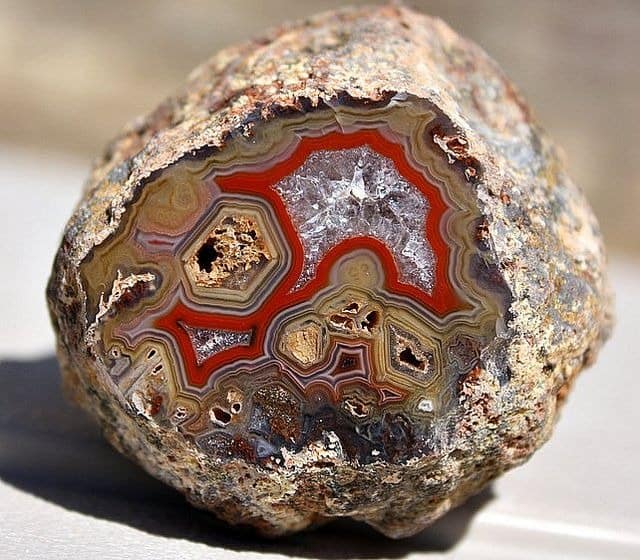 What assumes the appearance of another is called pseudomorph. Pseudomorphs in agate are incredibly uncommon; however, they do occasionally appear in nodular agates from different regions, generally taking the place of calcite or aragonite. No other agate area generates as many pseudomorphs as the Coyamito agate deposit in Chihuahua, Mexico.

This is roughly how the formational process works. The gas cavity in the volcanic andesite rock is where the initial crystal growth occurs (these crystals are believed to be aragonite in the case of the Coyamito Agate).

The crystals and the cavity’s interior are then covered with the agate that is now developing. The coating on the crystals gets thicker the more agate forms.

The said procedure may carry on indefinitely or, more usually, cease after the gas cavity is filled, leaving the nodule empty. 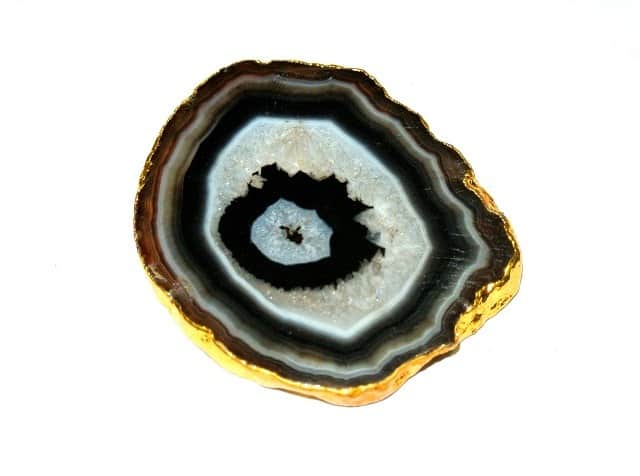 Chalcedony is a silicate mineral with parallel bands, most often referred to as onyx. The main distinction between the two-layered chalcedony kinds, agate, and onyx, is the shape of the bands: agate has curved bands, whereas onyx has parallel bands. Its bands come in various hues, from black to practically every color. Onyx specimens frequently have white or black bands. Although onyx is generally considered a kind of agate.

It has a long history of use in jewelry and hardstone carving, where it is typically cut into cabochons or beads. As the bands contrast the picture with the background, it has also been utilized for hardstone cameo and intaglio etched gems. Onyx is naturally occurring in some cases; however, the majority of the material used in manufacturing is created by staining agate.

Early bowls and other clay pieces in Egypt were made with onyx as early as the Second Dynasty. 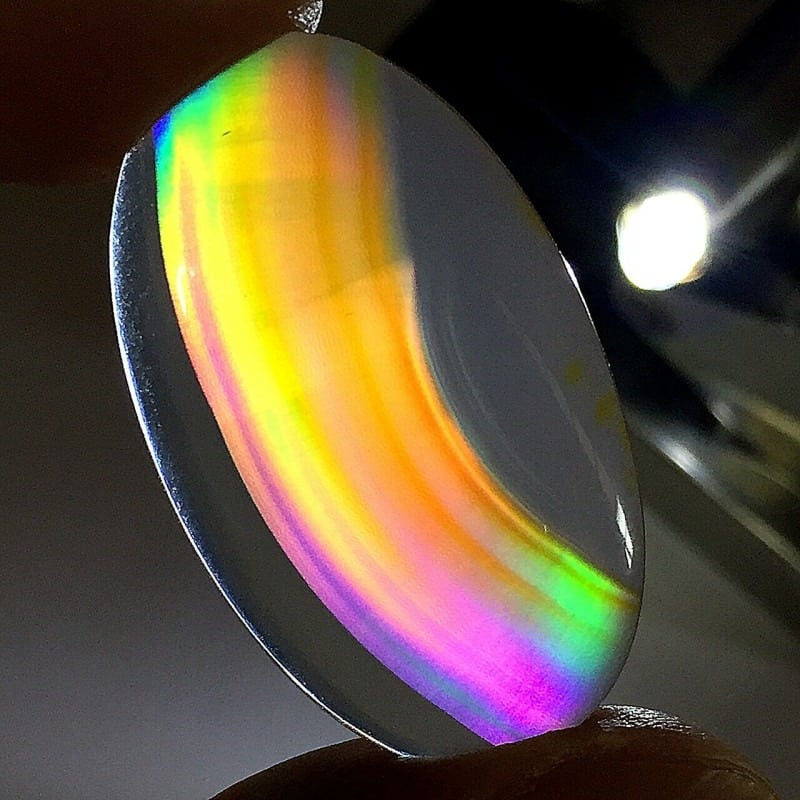 Iris Agate, which is thought to be the most expensive variety of agate, is a banded agate that, if light were not shining directly on it, would initially appear to be a typical stone. When light is shone onto it, however, it may then dazzle observers with a mesmerizing display of hues, generating lovely iridescent bands in rainbow colors.

This feature is only seen in a very small fraction of agates.

Because the word “iris” in its name refers to a display of rainbow-like colors, many people also refer to it as “Rainbow Agate.” This stone’s translucent and transparent qualities, which include fine bands within, give it the iris look by enabling light to travel in captivating ways.

When Fred S. Young was the publisher of the Oregon Mineralogist in 1933, he discovered the first examples of the iris agate stone. To find more of these stones, several trips have been made since then.

10 Most Expensive Abstract Paintings Ever Sold

6 Most Expensive Jeep Wranglers Ever