7 Rarest Stones in the World

Humans have always been attracted to gems and crystals, especially when crafted into beautiful jewelry and other trinkets, but geologists and experts alike will tell you that rare stones don’t have to be bright, shiny objects that are only destined to be used in rings, necklaces and bracelets.

While gemstones are deemed special for their crystal formations, rocks and stones are equally special for many different reasons. They are also used in jewelry, as well as ornaments and other decorative items, not to mention their innate beauty that’s in a world of its own.

Minerals and other substances can be called rare stones, which may include:

Price: About $2 per gram

A variety of lignite coal that’s been formed over millions of years from fossilized wood, Jet is technically not a mineral but it is considered by many to be a gem, because it can be polished and faceted. A rare form comes from Whitby, England – called Whitby Jet, which originates from the early Jurassic period, 182 million years ago.

Since the Neolithic period in Ancient Britain, Jet has been crafted into ornamental items and was even considered to contain magical properties by the Romans. In the Victorian era, Jet was used to make jewelry for mourning and the adjective “jet-black” comes from how dark this stone is. 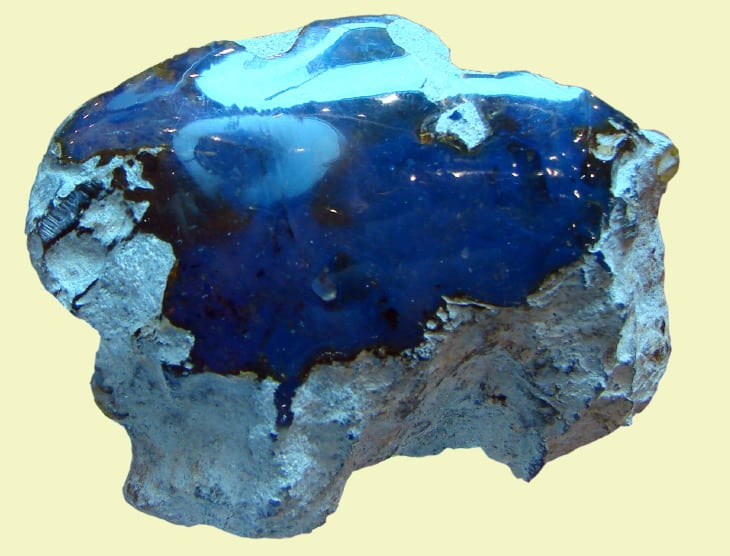 Year Discovered: Since the discovery of Dominican amber

Amber is an organic substance with a pleasant scent and is the hardened resin from ancient pine trees, which sometimes has inclusions of trapped insects and plants. It has been used in jewelry for over 10,000 years but the more rare stones are blue, found mainly in mines around the city of Santiago in the Dominican Republic.

The blue coloring is thought be the result of incomplete combustion in an extinct species of trees during forest fires around 25 to 40 million years ago. What’s fascinating about Blue Amber is that under artificial light or when held against the sun, the color is like regular amber, but in sunlight it has an intense blue florescent glow and when under ultraviolet light is appears bright, milky-blue.

Color: A variety of bright and alluring colors

Obsidian itself is a fascinating material, which is volcanic glass formed from magma or lava flows that are rich in silica and suddenly chilled by water or other elements, preventing crystallization. When broken or chipped, they can be razor sharp and this material was often used in weapons and tools for cutting. Fire Obsidian is a rare form with an iridescent quality and is found in the Northwest of the U.S.A.

Displaying brilliant colors and patterns, this stone can be worked into beautiful gems akin to Opals. Containing thin layers of microcrystals from magnetite, the colors and patterns change depending on the angle it’s viewed from, making it a sought after and wonderful example of a semi-precious stone.

Discovered At: All around the world in places with the right conditions

Price: Small beads can cost as low as a few dollars, however you should exercise caution with this toxic stone

Cinnabar is an interesting and unusual mineral that was favored by the Ancient Romans for its mercury content and its use as a pigment dye called vermilion. In China and South America, it was also used for decoration and ornaments, due to the various shades of red – from brick to cinnamon and bright scarlet. Composed of mercury sulphide, it occurs in volcanic veins and alkaline hot-springs.

Quite soft, with a hardness of up to 2.5 on the Mohs scale, Cinnabar is incredibly dense and heavy, making it a popular specimen for collectors, with the rarest examples found in China and Spain. Once used as a rouge and in cosmetics, this mineral is highly toxic and can cause mercury poisoning.

Discovered At: In tropical oceans near the equator

Year Discovered: New reefs are still being discovered  to this day, with Italy being the most recent host

Color: Many colors, due to algae and other factors

Price: From a few dollars per carat, into the hundreds

Red coral is also called precious coral and is an intensely colored “skeleton” found on rocky sea-beds with low sedimentation in dark crevices and caverns. Durable and highly colored from pink-orange to intense red, this mineral is mainly used for jewelry. Growing up to a meter in height, they have the appearance of leafless bushes and the original species is found mostly in the Mediterranean Sea.

Consisting of hard calcium carbonate, Coral can be polished until it has a glassy shine and was used for decoration by the Ancient Egyptians and has been discovered in prehistoric European burial grounds. Often used to make beads, this mineral is highly prized and has been considered to contain magical properties. Conservation is an issue, due to over-mining and damage due to the fishing industry.

Used as a semi-precious stone since around 7,000 B.C., Lapis Lazuli is an intensely blue rock that has been mined in places such as Afghanistan for various uses, including jewelry, ornamentation and as a pigment dye called ultramarine. This silicate mineral usually has inclusions of calcite, sodalite, pyrite and other materials. It was used in the creation of Tutankhamun’s funeral mask and other artistic works.

Found in other regions like Russia, Chile, Italy, Mongolia and the U.S., Lapis Lazuli is usually found in caves and is also polished for inclusion in objects such as small statues, boxes, vases and other precious items. This stone has been discovered in ancient burials and regions that existed since the Neolithic age and Cleopatra used the ground pigment for eyeshadow.

Discovered At: Found in the Temple of Lykaian Zeus at Mount Lykaion in Greece

Color: Often sandy or earthy tones, it depends on where the lighting strikes

Price: Varies greatly, but you can find common smaller specimens for a few dollars

Also known as fossilized lightning, Fulgurites occur when lightning strikes certain places, such as sand, soil, rock and other organic substances, creating a tube or clumps of fused matter. Popular among collectors, these oddities are usually hollow and sometimes branch out, depending on what the lightning has struck.

Fulgurites can occur deep under the surface of whatever the lightning hits and are sometimes used by scientists to calculate the history of lightning strikes in a specific region. Comprising of various glasses and silicates, these rare occurrences have created a full spectrum of colorful specimens, however most are transparent, white or black. In a sandy area, the temperature of the bolt can reach 30,000 degrees C. Due to it’s otherworldly nature and reliance on weather to be created, Fulgurite is the rarest stone on Earth.

This is just a sample of rare stones that are sometimes considered to be semi-precious, although collectors and scientists will argue that these minerals are even more fascinating than the dazzling and expensive gems we use for adornment. Besides, beauty is in the eye of the beholder.

Some might say that the difference can be likened to natural and unnatural, but the distinctions are not always so well-defined. A gem can be well-polished, faceted and bright and shiny, but it can also be dull or raw. Stones and minerals are often rough, but they can be fashioned into stunning works of art.

A factor when using rare stones and other natural substances for jewelry is their hardness, which is where gems win out, as their hardness is usually a lot greater than that of certain minerals or other substances as mentioned above, for the purpose of carving, cutting and polishing them into shape.

The Main Differences between Rare Stones and Gems

According to National Geographic:

Having said that, all rocks, stones, gems and other related substances consist of minerals. While they are all formed under similar conditions, gems are usually found under the Earth’s surface while rocks, stones and other minerals can be found above ground.

For example: diamonds and graphite are both made from carbon, however diamonds are created under extreme pressure deep in the Earth while graphite is formed above ground without the same pressure, which is what makes it a rock instead of a gem.

10 Rarest Coins in the World