What Is the 1988 Washington Quarter Made Of?

Moreover, the quarter, which is worth 25 cents, was first struck in 1796. It wasn’t always George Washington who graced the coin. Before Washington, there were many designs that were included. These included the following:

It took decades before the Washington design was used for the quarter coin. It was the sculptor John Flanagan who designed the Washington quarter in 1932, which was also the bicentennial birth year of George Washington, the first president of the United States. 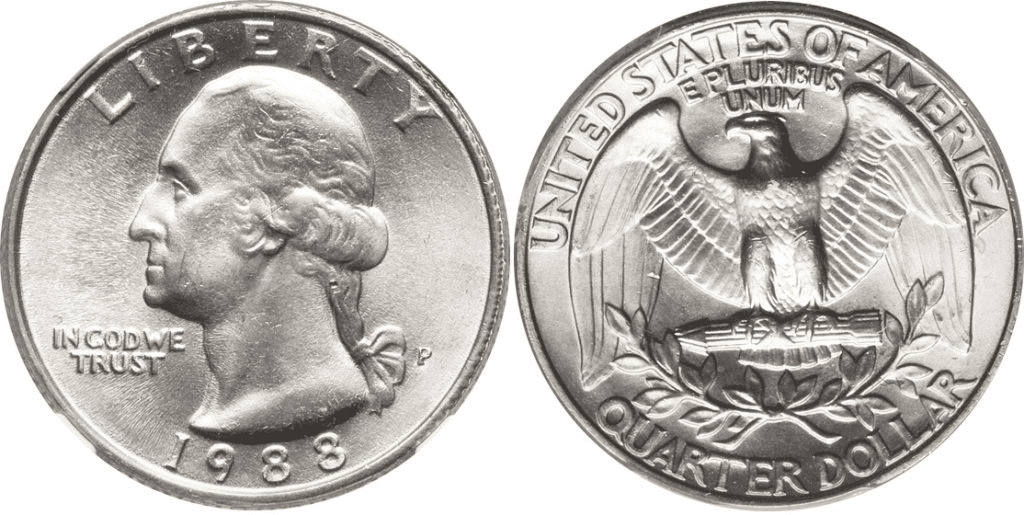 When it comes to design, on the obverse, you will find George Washington facing left. On top of his head is the word, “LIBERTY.” On his left side, just under the chin, you’ll read, “IN GOD WE TRUST.” Beneath Washington is the year, 1988.

On the reverse, you will find an eagle with its wings outspread while perched on a bundle of arrows. Under the arrows are two olive branches.

The inscriptions on the reverse side include “UNITED STATES OF AMERICA” arched on top of the coin. Between the eagle’s head and the USA inscription, you’ll read the motto, E PLURIBUS UNUM, which means out of many, one. Finally, beneath the olive branches are the words, Quarter Dollar.

Did you know that the original plan was to have George Washington in the half-dollar coin? However, it was decided eventually to have him on the quarter coin.

The United States Mint produced various types of 1988 Washington quarter coins. You can easily distinguish these coins based on their mint marks. The mint marks indicate where the coin was struck.

Aside from the mint marks, some coins also differ from others because of errors they have received during the minting process. The errors gave rise to a new type of coin.

Here are some of the most common 1988 Washington quarter varieties: 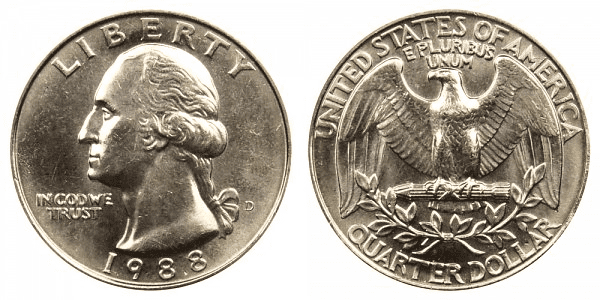 You can sell this coin for $0.30 to $11. However, the open market offers a higher price for pristine and rare 1988 quarter coins. 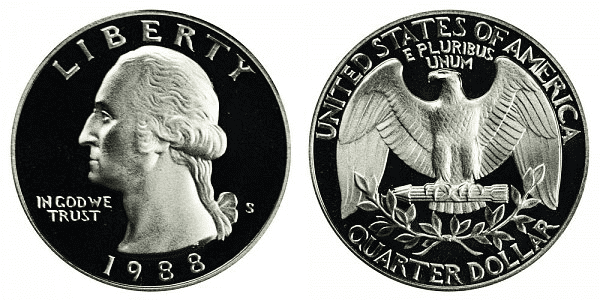 Among the three types of quarter coins, it is the S variety that is considered to be the most valuable. The reason is that the coins produced in the San Francisco Mint are proof coins.

Proof coins are known to be more appealing to the eyes. Its engraved elements are more detailed and deep. The background of the elements is shinier, which makes the coin to be more in demand among coin collectors.

You can sell a 1988 S Washington Quarter for $0.30 to $16. Since proof coins are more difficult and meticulous to produce, the San Francisco Mint was only able to produce a little more than three million of these coins.

It is not surprising to see that there are 1988 Washington quarters that were struck with errors. Sometimes, these errors can dramatically increase the value of the coin. So, you can say that errors are blessings in disguise for many coin collectors.

Here are some of the most commonly known errors of the 1988 Washington quarter coins: 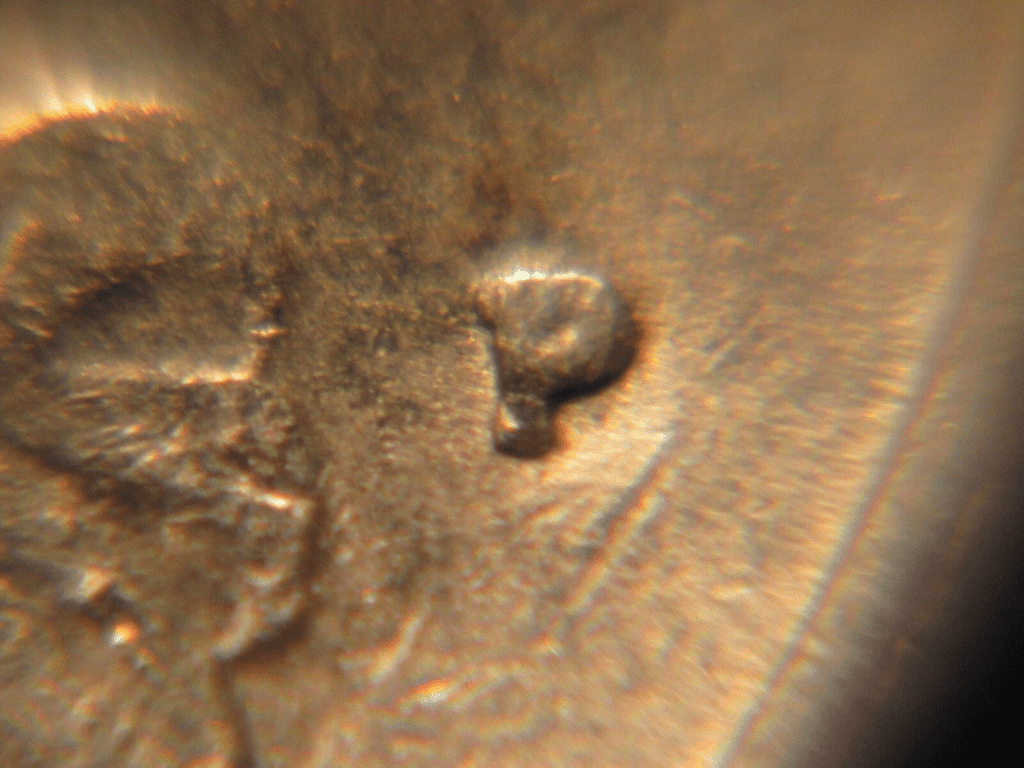 The mint mark in this error is obviously not clear. When the coin was struck, the “P” die didn’t hit the coin hard enough to leave a detailed letter. 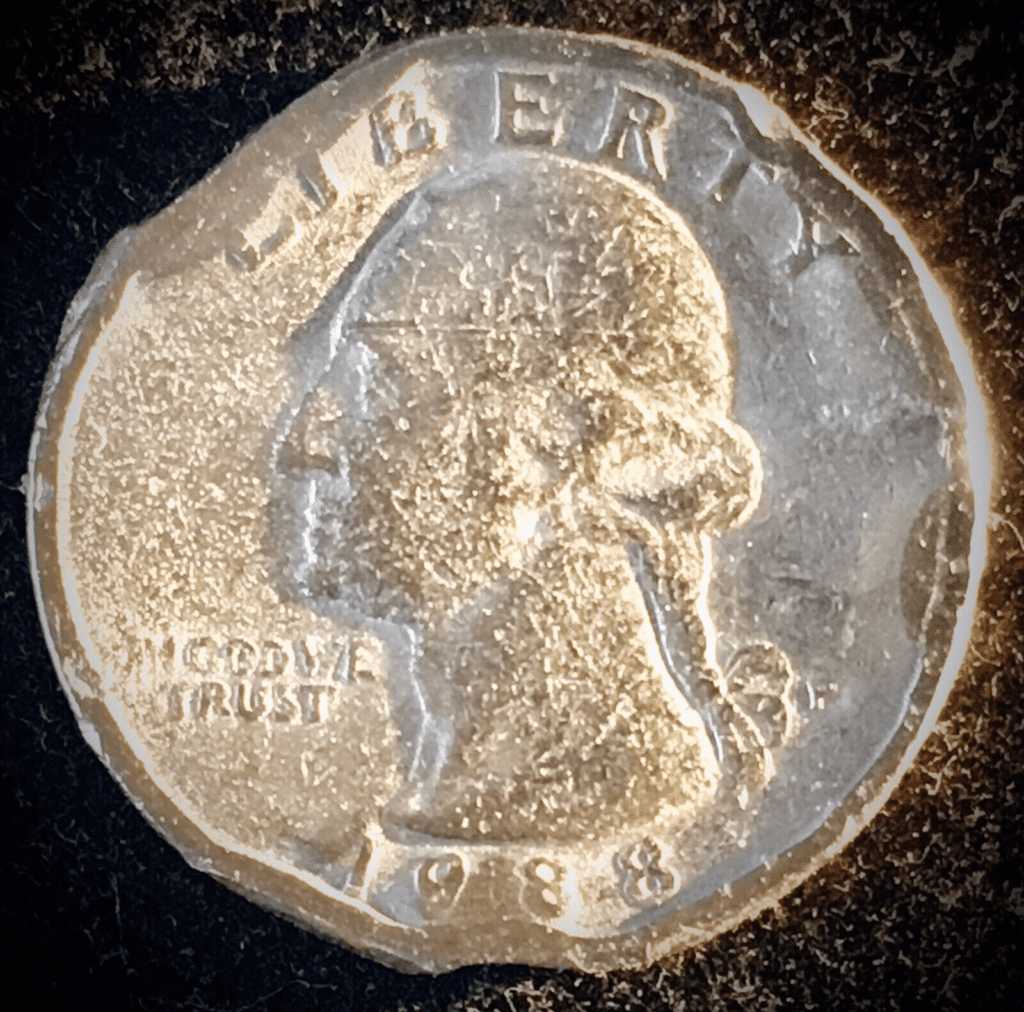 In this error, the planchet wasn’t shaped properly. As a result, it has deformities on the edges. 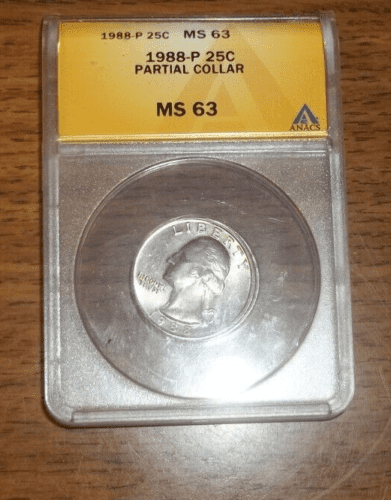 If you look closely, you’ll see that the part of the collar of Washington is missing. 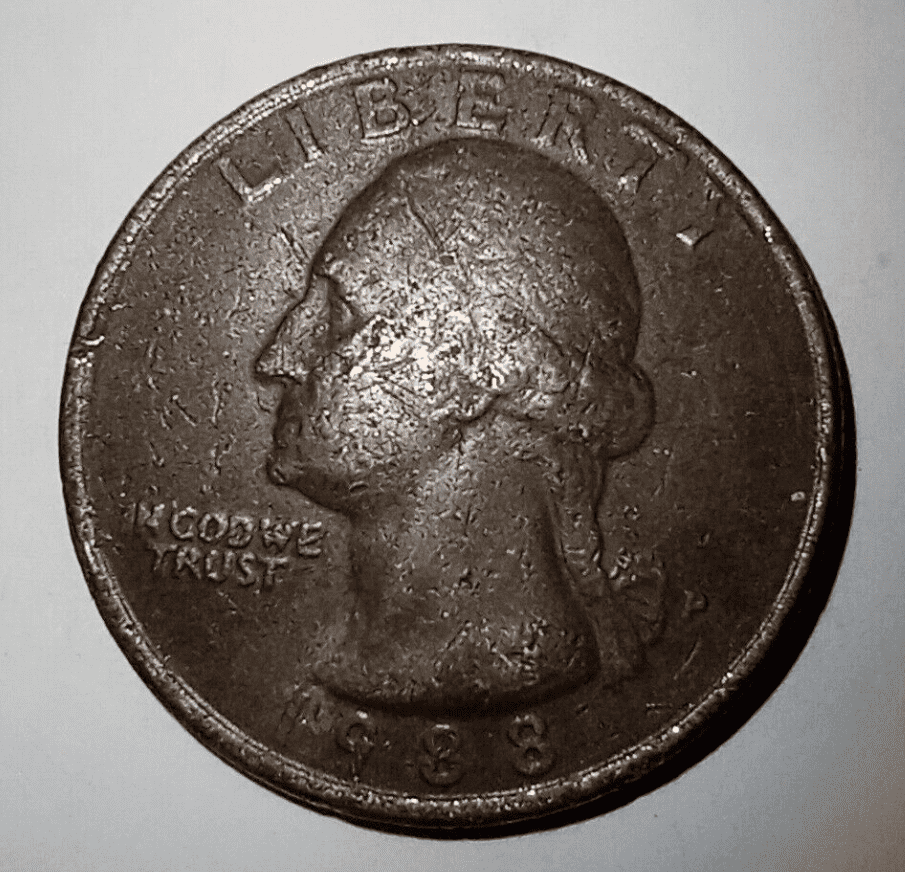 The coin wasn’t properly clad with nickel. As a result, there’s a discoloration on the surface of this coin. 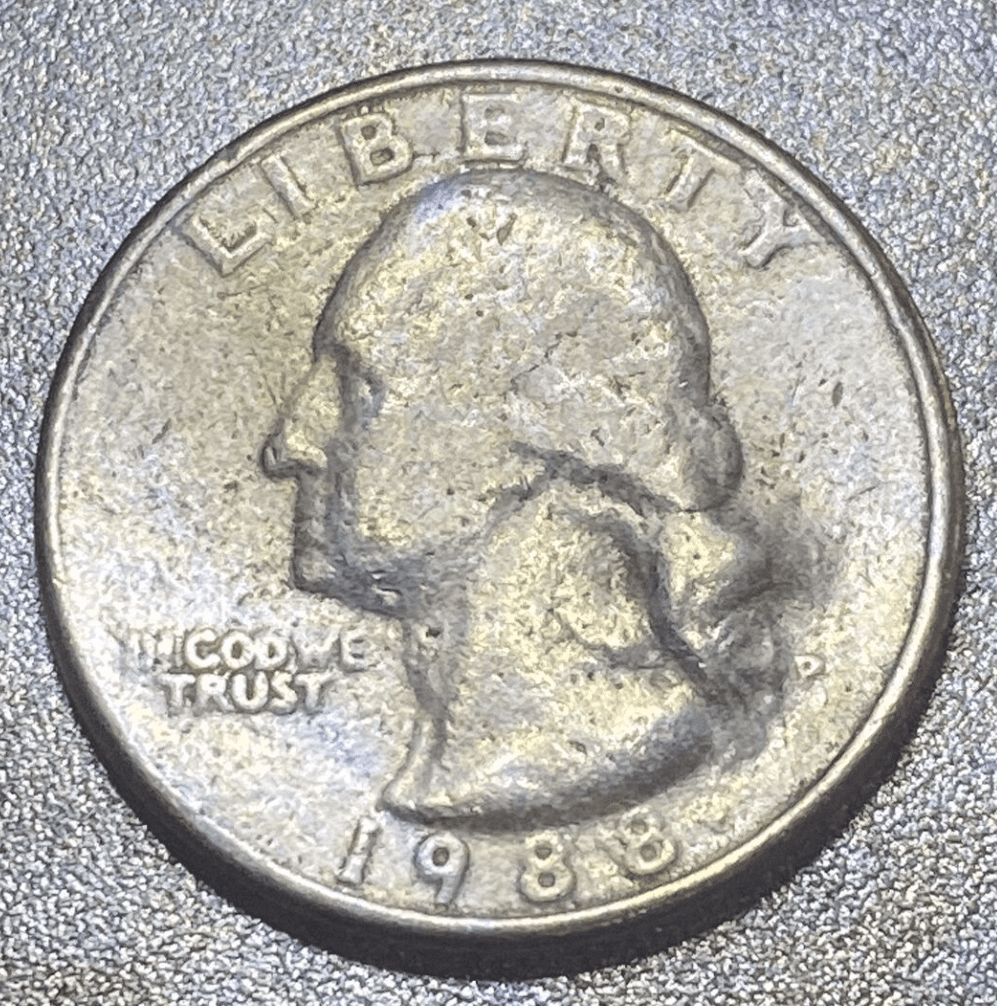 The error on this coin happened because it was struck through grease. As a result, the die wasn’t fully in contact with the planchet. You can see that the details aren’t that clear.

How Much Is 1988 Washington Quarter Worth Today?

The circulated and standard-struck 1988 Washington quarter isn’t worth that much. For one, there are millions of these that are in existence. You can easily find them in the market. Since there’s a high supply, there’s lower demand. This shrinks the value of the coin.

If you have an ordinary 1988 Washington quarter, you might just be able to sell it for its face value, which is $0.25 cents.

However, there are still those 1988 quarters that are rare and more precious than others. You can even sell them for a couple of hundred dollars.

To give you an idea of the usual pricing of 1988 Washington quarters, please check out this table:

Where To Buy Or Sell 1988 Washington Quarter?

The 1988 Washington quarter can easily be bought online. There are different online platforms out there that you can use to buy or sell your desired coins. You can go to Amazon, eBay, or Etsy to find the right 1988 quarter for you.

You can also go to Google and do a search. Use relevant keywords such as, “where to buy (or sell) 1988 Washington quarters?” You should get a list of websites that would surely meet your needs.

What’s so great about online platforms is that you can complete your transactions from the comfort of your home. With just a few clicks or a push of a button, you can sell or buy coins in just a matter of minutes.

Of course, you need to be careful as well. There are thousands of scammers online. You need to only transact with trusted people and reputable companies.

Aside from online, you can also visit coin shops or antique stores. Another option would be auction houses that occasionally offer old coins for collectors.

1988 D Quarter Doubling In God We Trust Or Smooshed?

There is a popular thread about a 1988 D quarter. The user “Coin-curious” asked whether the coin he is interested in is a doubling or simply smooshed. Some members of the Coin Community responded that it is more likely to be a doubling while others mentioned that it is smooshed.

The best suggestion from the thread is to go to an expert and reliable coin dealer and have the coin checked. Coin-curious can also go to one of the most reputable coin grading service providers to establish a true answer to his question.

A Washington quarter from 1988 has a worth that is the same as its face value. So, an ordinary 1988 quarter isn’t worth that much. According to the NGC Price Guide, a circulated 1988 quarter coin can only be worth around $0.30 and $0.85.

However, your coin may be worth more if you sell it in the open market. Some 1988 quarter coins were even sold for as much as $825.

No, based on the discussion in Coin Community, the discoloration was most likely caused by the external environment rather than missing plating or properly known as clad.

Perhaps, a rare error in a 1988 quarter is the broad struck error. This is caused by a misaligned, dispositioned, or loose die collar. The error leaves a “broad” edge on the coin.

Where can I find the mint error of the 1988 quarter?

The mint mark is usually found on the right side of Washington’s pigtail. So, if there’s any mint error, you will most likely find the error in the same place where the mint mark is placed.