As the official silver bullion coin of the United States, it is a special collector’s item and most people would like to have one of these.

First minted in 1986 and released on November 24 of the same year, the 1987 silver dollar, also known as the American Silver Eagle, was designed by John Mercanti (reverse) and Adolph A. Weinman (obverse). 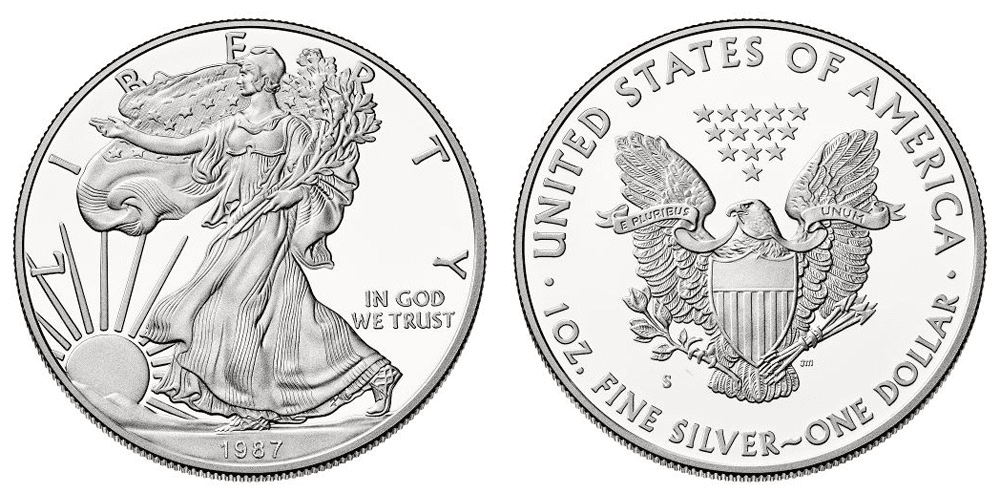 As per its design, on the obverse, you’ll find the “Walking Liberty,” which was based on the design used in the half-dollar produced from 1916 to 1947.

For most people, the half-dollar design in those years was considered to be the most beautiful American coin in history.

The Walking Liberty holds with her branches of olive that represent peace. Behind her is a flag of stars. On the lower left side, you’ll find a sun.

Inscriptions include the following:

On the reverse side, the proud heraldic eagle spreads its wings. On its beak, it holds a banner that says, “E PLURIBUS UNUM,” which means “Out of many, one.”

On top of its head, you’ll find the 13 stars, which represent the 13 colonies. The eagle’s left talon holds an olive branch and on the right talon, you’ll find arrows.

Inscriptions on the reverse include the following:

The nominal value of the 1987 silver dollar coin is one dollar. The coin is struck in the one-troy ounce and the United States Government guarantees its weight and purity. The minting of the silver dollar was authorized by the Liberty Coin Act, which was ratified on July 9, 1985.

Because the silver dollar is a special coin, it is minted in the Philadelphia Mint, West Point Mint, and San Francisco Mint. This coin can even be used to fund IRA or Individual Retirement Account investments.

Today, there’s a newly designed reverse, which was prepared by Emily Damstra. In this design, the eagle no longer floats, but it is seen to be landing on a branch. 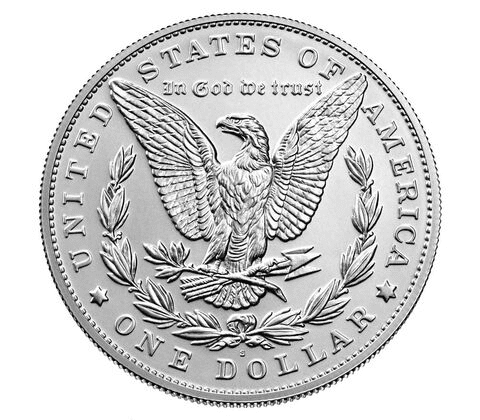 The 1987 silver dollar comes in different varieties. Here are some of them: 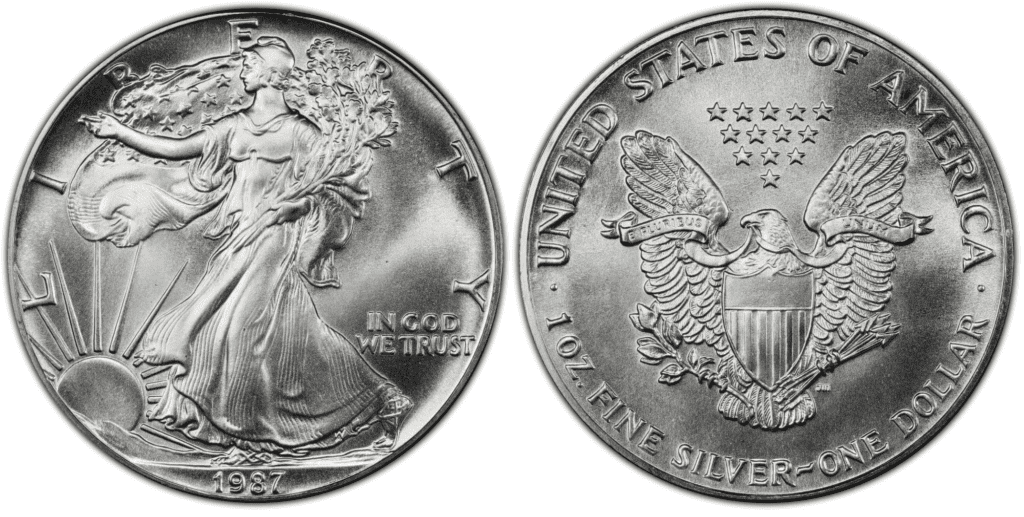 The 1987 silver eagle dollar was produced in the Philadelphia Mint. There were more than 11 million of these coins minted in 1987. The usual price of this coin can range from $33 to $780. 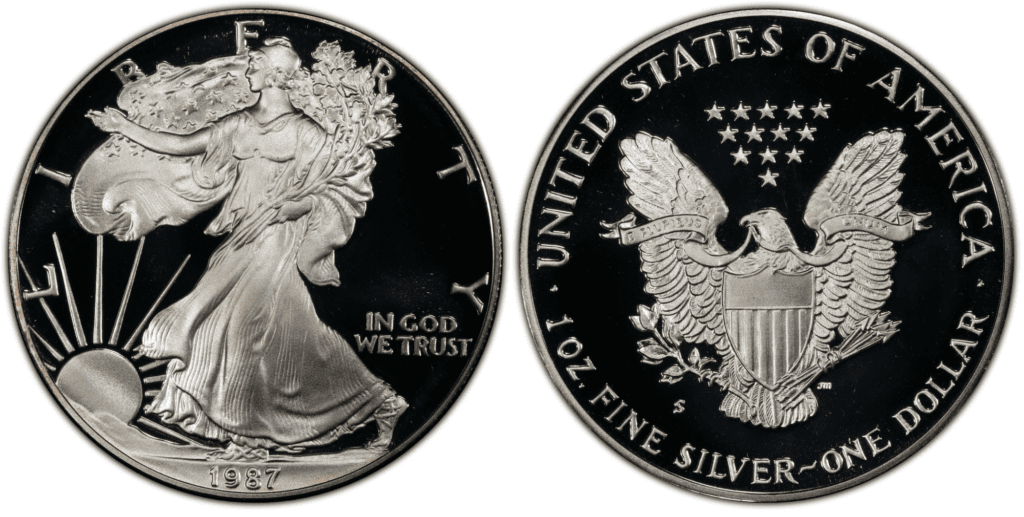 The 1987 silver proof eagle dollar is a proof coin produced in the San Francisco Mint. Since it’s a proof coin, it has a higher level of luster and eye appeal. Its engraved elements are more detailed and the background of the coin looks shinier.

At the end of 1987, there were more than 904 thousand silver-proof eagle dollar coins produced. 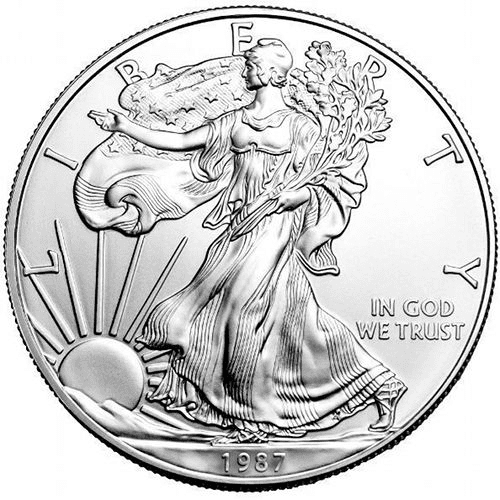 The 1987 silver dollar was carefully produced. However, errors are inevitable and thus, there are those coins that incurred an error during the minting process.

Coin minting errors can happen due to a problem in the die, planchet, or strike. Errors may also happen before, during, and after the minting process.

Some of the most common coin-minting errors that you might see include double strikes, broad strikes, off-center strikes, die cracks, planchet folds, and others.

Here are some examples of silver dollar errors: 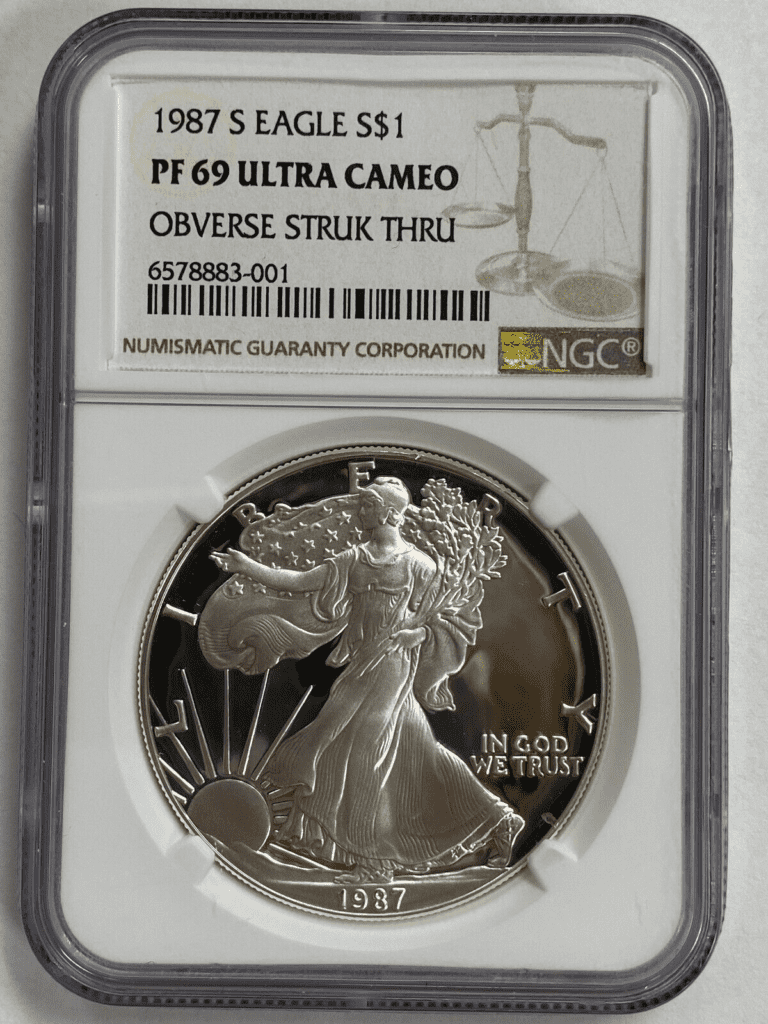 This coin has an error with how the die was struck. During the strike, a foreign material got between the blank planchet and the die. This object might have been metal shavings, staples, or other objects. 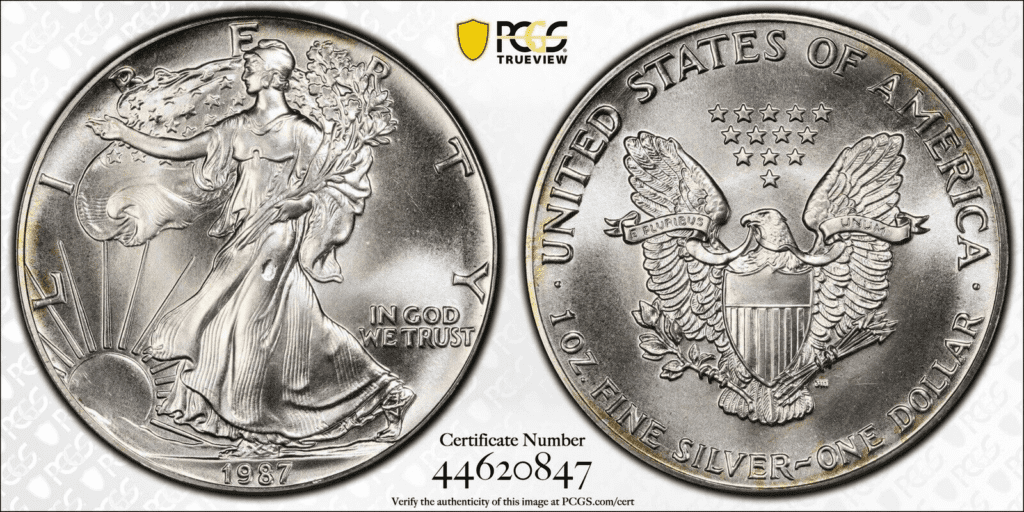 Look closely at the thigh of the walking Lady Liberty. It seems that something was chipped or missing. This is most likely caused by a failed strike.

How Much Is the 1987 Silver Dollar Worth Today?

The 1987 silver dollar has a nominal face value of one dollar. The usual selling price of this coin is around $2 and above. Since this is a special type of coin, you may be able to sell it above its face value. When it comes to the melt value, the price of silver increases and decreases. Thus, melt value changes regularly.

To give you an idea of how much a 1987 silver dollar is worth, here is a comparison table:

Where to Buy or Sell 1987 Silver Dollar?

If you’re planning to sell your 1987 silver dollar or you’re looking to buy one, then the best place to go would be the Internet.

You simply need to do a Google search and you should find a list of websites where you can buy or sell 1987 silver dollar coins. Here are some of the best online platforms you might want to check:

Aside from online, you can visit offices of coin appraisers. Usually, those that offer coin grading services sell or buy silver coins, too. If not, they can refer you to the right dealer.

Check out coin and antique shops. Auction houses may also offer buy-and-sell coin services. If possible, try to join clubs or groups of collectors. Having an extensive network of like-minded people can help you buy and sell silver coins.

How many silver eagles were minted in 1987?

Where is the mint mark on the 1987 silver dollar?

The mint mark is found on the reverse side of the 1987 silver dollar, just at the lower left side of the eagle, near the left talon.

How much is a 1897 silver dollar worth today?