The US Mint chose sculptors Gilroy Roberts and Frank Gasparro to finish the piece when Congress agreed to develop a new half-dollar design to honour John F. Kennedy. The finished piece of art was straightforward and focused on paying tribute to Kennedy and the country he served. The first Kennedy half dollar was minted in 1964, and it is still in circulation today.

The obverse of the coin has a bust of John F. Kennedy looking to the left. At the top of the coin is engraved “LIBERTY,” and at the base of Kennedy’s neck is written, “IN GOD WE TRUST.” The mintage date is centred at the bottom of the obverse.

The American bald eagle’s coat of arms can be seen on its breast, and its wings are spread widely. The olive branch and a number of arrows are in the eagle’s talons. The words United States of America are centred at the top of the coin, and half dollar is centred at the bottom.

The meltdown at the Chernobyl nuclear power facility turned 1986 into a catastrophe that changed history forever. Both the tragic Challenger shuttle accident and Halley’s comet’s close encounter with Earth happened in 1986. 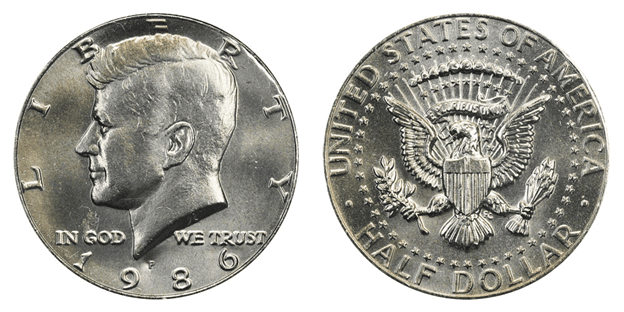 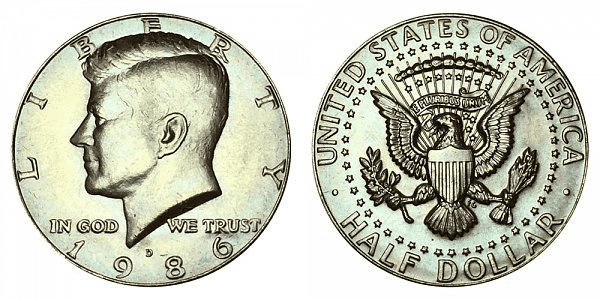 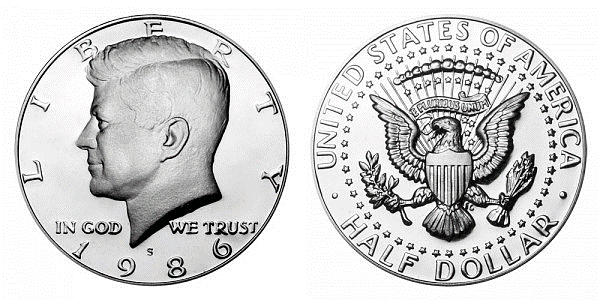 US Statue of Liberty Commemorative Half Dollar 1986 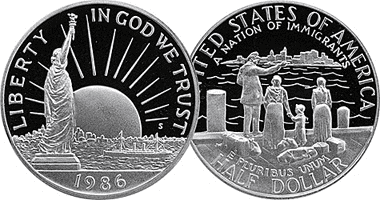 The US government discovered that it could sell attractive commemorative coins for considerably more than they were worth and still make a tidy profit around 1986. The face value of this coin is 50 cents, although the mint only made a profit of roughly $7 per piece.

The sentimental worth of these coins, which feature a lovely design, may be very high. They would be worth a lot if they were made of silver. These coins, however, are constructed of copper and nickel. Uncirculated coins currently sell for an average retail price of $1 to $3. A proof copy, like the one in our image, might cost between $5 and $7.

There are no nationally recognized Kennedy Half Dollar errors, meaning the errors seen in coins  minted in this year are regarded on a coin-by-coin basis.

How Much Is 1986 Half Dollar Worth Today?

Due to the absence of precious metal, Kennedy half dollars made between 1971 and 2014 have a substantially lower melt value than their face value, which is only $0.1003423. This means that the 1986 Kennedy Half Dollar’s value is seen in pristine condition and errors. High-grade 1986 Half Dollars can be worth around $5.70-6.65, making them suitable for entry-level collectors.

Due to their (usually) low worth, 1986 half dollars can be purchased and sold with some degree of assurance on online auction sites like eBay and Etsy. Naturally, you should always make sure to look for any uncommon flaws before you sell any 1986 half dollars, since these coins must first be authenticated and graded by a company like PGCS in order to be offered for sale at auction or to a specialised dealer.

Is the 1986 Liberty Half Dollar silver?

The most uncommon half-dollar coin, excluding overdates, proofs, and unusual variants, is the 1873-S without arrows. It is believed that none of those coins survived. The 1796 and 1797 half dollars are the rarest coins remaining in circulation. From 1878 through 1890, seated liberty half dollars had some low mintages and were typically hard to come by.

What year half dollars are pure silver?