American Silver Eagles were first manufactured and offered for sale in 1986 following their approval on July 9, 1985, by the Liberty Coin Act (Public Law 99-61). Each is made of.999 pure silver, the highest purity of any silver piece produced by the United States Mint, and weighs one troy ounce.

Congress wanted to get rid of the federal government’s enormous silver hoard, which at the time totalled more than 139 million ounces. This led to the creation of the American Silver Eagle, which is maybe the most well-known collectable currency today. The Liberty Coin Act required the Mint to produce coins with a.999 pure silver content that were 40.6 millimetres in diameter and 31.103 grammes in weight. The currency features an eagle on the reverse and a design symbolising Liberty on the obverse side.

The obverse design of the coin, which features Adolph Weinman’s “Walking Liberty,” was predetermined, according to John Mercanti, the former Chief Engraver of the United States Mint and creator of the American Silver Eagle reverse. However, a number of technical difficulties with the design had to be resolved before the coin could go into production.

The year 1986 was almost ended when the coin was eventually completed. The coin was struck on October 29, 1986, but it wasn’t until James Baker, the Secretary of the Treasury, inaugurated Coin Press 105 at the United States Assay Office in San Francisco that the first coins came off the press. Several coins were produced for and by the VIPs present.

There were two different finishes available for 1986-dated Eagles: a bullion strike that had no mintmark but was only made at the San Francisco Mint, and a proof issue that was also only manufactured there and included an ‘S’ mintmark. 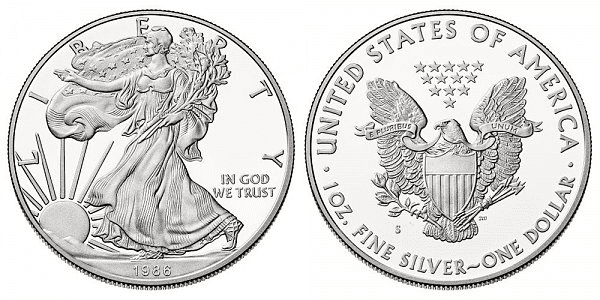 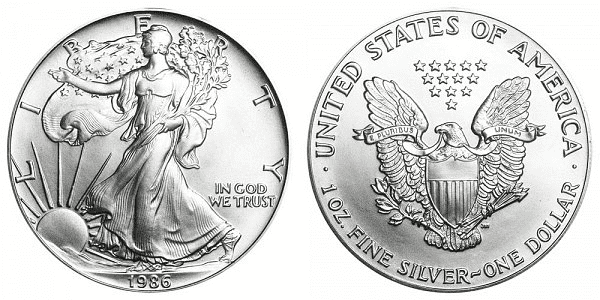 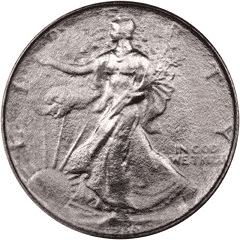 The Silver Eagle series debuted in 1986, therefore the US Mint experienced a little learning curve. The dies were prepared using a variety of methods, including polishing and sanding, both of which can leave tiny fragments of material behind.

A “struck through” mint mistake occurs when the material is struck into a planchet and leaves a mark on the coin’s surface. A struck-through error of the kind found on this specific 1986 Silver Eagle is incredibly uncommon. This coin was probably produced using one of the die preparation tools that the Mint at the time employed, such as a 3M sanding disc.

The coin’s entire obverse exhibits a severe loss of detail, as can be seen in the photographs. The letters for LIBERTY and IN GOD WE TRUST are not clearly defined, and the date is hardly readable.

How Much Is the 1986 Silver Dollar Worth Today?

1986 Silver Eagles have a melt value of $21.72, due to their high silver continent, however, these coins are actually worth more than their metal value or indeed their face value, despite not being very uncommon or desirable in general.

There are three primary causes for this:

As mentioned, a 1986 American Silver Eagle will cost you at least $20 to $30 more than its intrinsic value, even though its value is still largely based on current silver bullion prices (and hence fluctuates too rapidly to report here).

A 1986-S proof silver eagle currently sells for around $60 and higher. The 1986-S proof American Silver Eagles that are designated Proof-70 are the most expensive. These premium coins typically sell for $400 to $500 each.

Are There Any Rare 1986 Silver Dollars?

All 1986 Silver Eagle dollars are sought after, are as errors in this coin are incredibly unusual, the rarest 1986 silver dollars tend to be those in exceptional condition. PR70 S-Proof coins, for example, can be worth around $500 a piece. When compared to the tens of thousands of coins certified PCGS MS69, PCGS has “only” graded “just” a thousand instances in MS70. According to the PCGS Price Guide, prices for the 1986 American Silver Eagle in PCGS MS70 typically range around $1,050.

Where to Buy or Sell 1986 Silver Dollar?

As this coin has significant value, it’s definitely worth avoiding online marketplaces, as it can be hard to tell the overall condition and whether or not the coin is genuine. Instead, buy and sell your silver dollars through recognised coin dealers and auction houses. Look for coins that have been graded by services such as PGCS or NGC for complete peace of mind.

How much is a 1oz silver eagle worth?

A one-ounce Silver American Eagle now costs about $34 to acquire.

A bank does indeed sell American Silver Eagle coins. According to the U.S. Mint, only approved buyers are allowed to purchase Silver Eagles.

A coin in this grade is worth around $83.