The 1986 Lincoln Penny is very contemporary in terms of coin collection, and it is frequently found in change. The 1986 penny’s value is decided by its sentimental value unless it’s a rare mistake coin. One of the most fascinating aspects of coins and coin collections is their capacity to serve as a record of historical occurrences that occurred in a particular year.

Additionally, they can be used as a keepsake for someone who was born in that year or who experienced a significant life event in that year.

The 1909 Brenner wheat stalk design that featured on the 1986 cent was replaced with the 1959 Lincoln Memorial reverse created by Frank Gasparro. Gasparro’s initials, FG, can be seen on the lower right side of the Lincoln Memorial.

While the words “UNITED STATES OF AMERICA” are printed all the way around the upper portion of the reverse along the rim, the words “ONE CENT” are written beneath the structure and around the rim.

Between the words, UNITED STATES OF AMERICA and the top of the Lincoln Memorial is written the motto E PLURIBUS UNUM. The edge of the Lincoln cent is simple and without any engraving or reeding.

In 1982 the metal composition of the Lincoln Penny changed to reflect changing values in metal. This means that the 1986 Lincoln Penny has a 97.5% Zinc and 2.5% Copper composition, instead of the nickel and copper combination seen previously.

1986 was a catastrophic year, with the Chernobyl powerplant disaster changing the world forever. 1986 also saw the tragic Challenger shuttle disaster, and the closest Halley’s comet had ever come to Earth. 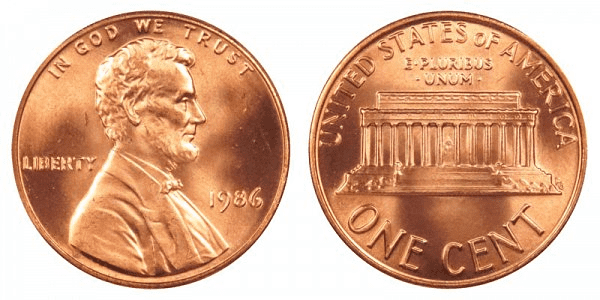 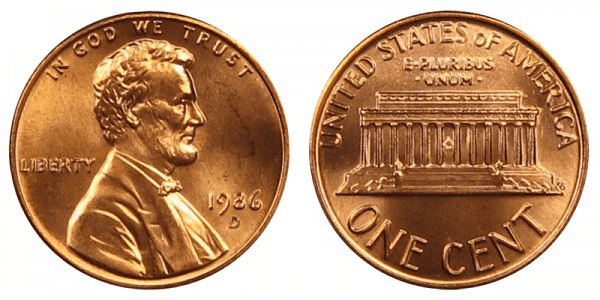 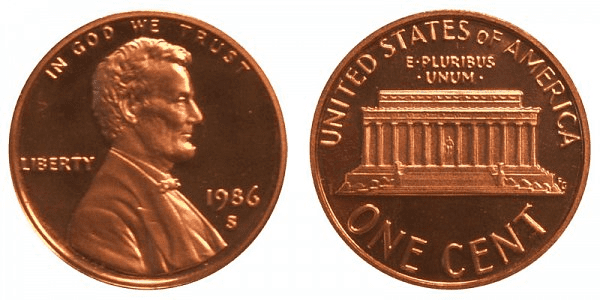 On the obverse and reverse of some 1986 pennies, there is very slight doubling. These can be located by keeping an eye out for doubling in specifics like the inscriptions, dates, Lincoln’s eye and bowtie, as well as between the Lincoln Memorial’s columns.

The average 1986 doubled die penny is worth between $25 and $50, however examples with spectacular doubling and in excellent condition can be worth much more.

Die wear and cracking will occur after striking countless numbers of Lincoln coins. Die breaks and cracks can produce very collectable variants, such as the “BIE” variety, which is exclusive to the Lincoln cent. It happens when a tiny, vertical die crack emerges in the word “LIBERTY” between the letters “B” and “E.” The so-called “BIE” variant was created by certain die cracks that resemble the capital letter “I.”

Depending on the size of the “I” die crack and the condition of the coin, these sell for typically $5 to $15.

1986 Lincoln Pennies have a melt value of around its face value, meaning there’s no intrinsic  metal value to be seen with these coins. Unless there’s something special about them, circulated pennies aren’t worth more than their face value.

Flea markets, estate sales, and online marketplaces like eBay are the ideal places to get 1986 Pennies by the roll because they are mostly regarded as a novelty or sentimental coins for those who were born in the year, got married in the year, or had other major events occur in the year.

Working with trustworthy coin dealers and auction houses (like Heritage Auctions) is essential for added peace of mind when dealing with unique or rare coins, such as the 1986 Pennies with defects or those in fantastic condition. Ask for advice in online communities for coins if you’re unsure whether your penny has a more valuable mint flaw or not.

The Lincoln Pennies that reach into the hundreds or thousands of dollars are those of absolute mint quality such as those that are MS68 and high or PR70.

What Lincoln penny is the rarest to collect?

One of the most mysterious coins in American numismatics is the 1943 copper alloy cent, which is also rumoured to be the most expensive Lincoln penny ever.

There were no 1986 silver pennies minted, any coin which shows a silver tone is either an exceptionally rare undiscovered error, or the copper cladding of the coin has been removed, revealing the silver zinc core of the coin.