Beginning in 1968, the copper core and 8.33% nickel coating of the Washington Quarters took the role of the silver component. Based on Jean-Antoine Houdon’s bust from 1786, John Flanagan designed the picture of George Washington facing left on the coin’s obverse.

On the coin’s obverse, the phrase “LIBERTY” is inscribed all the way around Washington’s head, including the hair. Around the entire bottom of the smaller George Washington bust, the year “1979” is carved. The nation’s motto, “IN GOD WE TRUST,” is written to Washington’s left.

On the reverse of the coin, an Art Deco-inspired heraldic eagle perches above a cluster of arrows. Both the eagle’s head and the arrows point to the left. The eagle’s base is surrounded by two sprays of olive branches arranged in the shape of a U, and the words “United States of America” are printed all the way around the top of the coin.

The motto E PLURIBUS UNUM appears below it. The term “QUARTER DOLLAR” is printed on the coin’s base. The 1979 Washington quarter has a reeded edge.

The Chernobyl nuclear power plant meltdown made 1986 a disastrous year that altered history forever. The catastrophic Challenger shuttle tragedy and Halley’s comet’s closest approach to Earth both occurred in 1986. 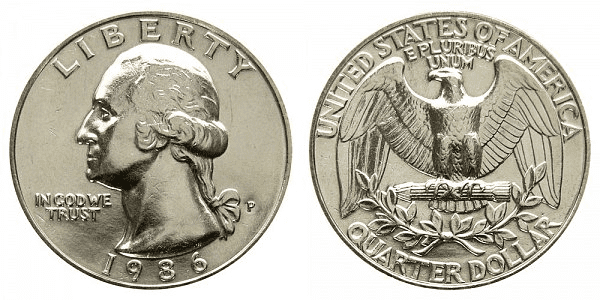 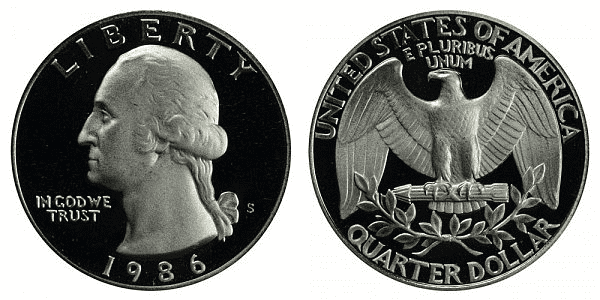 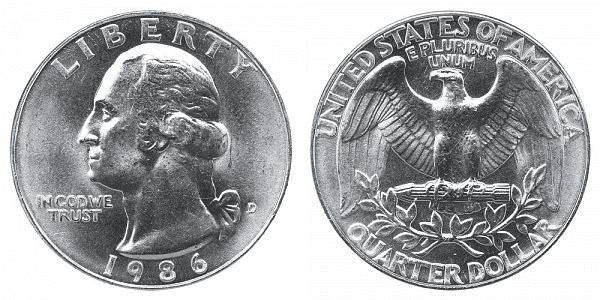 It’s interesting to see that 1986 saw comparatively few sales of uncirculated sets. The U.S. Mint provided the annual set during the 1980s, but only 1,153,536 mint sets were sold that year, the lowest distribution ever.

Additionally, the commemorative coin programme at the U.S. Mint was really picking up steam in the middle of the 1980s, and a lot of people just paid more attention to purchasing those than, say, saving rolls or bags of 1986-D Washington quarters.

Circulated 1986-D clad Washington quarters have sold in grades of Extremely Fine-40 for 50 cents or more, and they are worth $4 and above in uncirculated condition. 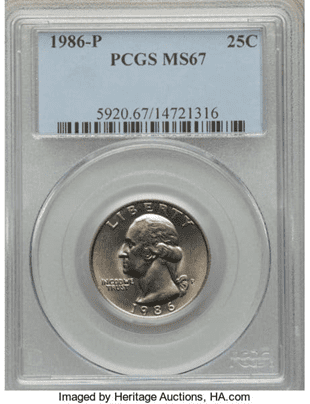 In 1986, more than 550 million contemporary quarters were produced. So it’s difficult to discover one that’s worth a lot of money. But one such example is this coin, which was struck in Philadelphia. The PCGS assigned it a grade of MS67. It was then one of the ten coins of that calibre that were known to exist. No coins graded higher than it have ever been discovered, and it also secured the joint highest rank for quality. In June 2019, Heritage Auctions put it up for auction. The winning bid came in just under $2,900 after the buyer’s premium.

How Much Is the 1986 Quarter Worth Today?

The low $0.052 melt value of a 1977 quarter serves as an example of how condition, flaws, and provenance all play a role in determining the worth (above the face value) of this money. This coin has no melt value because precious metal isn’t present. With the exception of MS-grade coins, which are only worth their face value since they are still in circulation, the majority of these coins’ value, excluding rarities, is determined by their condition.

Where To Buy Or Sell 1986 Quarter Dollar?

It can be beneficial to carefully inspect a 1986 quarter in your collection for defects or distinctive features before considering selling it. Regular 1986 quarters fetch a few bucks on websites like Etsy and eBay and are coveted for their sentimental significance. If you encounter a 1986 quarter in your pocket change, it’s unlikely to be worth much as the condition will be non-mint, but still check for any lucrative errors.

If you’re unsure but believe you may have something rare, you can upload an image to a forum for coin collectors to ask for assistance; there are even some excellent tutorials by the U.S. Mint. You may prevent fraud while purchasing and selling rare 1986 quarters by only doing business with reputable, specialised dealers like Heritage Auctions.

What quarters should you save?

1932-1964 Washington quarters are desirable because of the silver content contained within a coin.

What quarters from the 1980s are valuable?

1982 and 1983 quarters are the most valuable coins from this decade.