What Makes A 1971 Eisenhower Dollar Valuable?

At the beginning of the 1970s, the general public’s desire for a  dollar coin was hardly discernible. Still, the gaming industry quickly realized that it needed to find a substitute for the silver dollars it had been using to fuel tens of thousands of slot machines.

This “need” and the recent loss of Dwight D. Eisenhower, a famous war hero turned president, gave Congress the chance to address the sector’s demands.

Mary Brooks, the director of the United States Mint, advocated for the currency to be struck in silver, but Congress ultimately decided to utilize the same copper-nickel (Cu-Ni) clad composition as is used for the dime and quarter dollar.

A compromise allowed for the issuance and sale of silver-plated replicas to collectors; it is the silver-clad edition of this coin that is the focus of this article.

It was contentious to strike silver-clad Eisenhower dollars for collectors. A portion of the proceeds from the sale of the collector versions of the coins was designated for the newly founded Eisenhower College in Seneca Falls, New York, thanks to Public Law 93-441.

The college was expected to receive a distribution of “one-tenth of all the money derived from the sale of $1 [Eisenhower] proof coins,” with 10% of the total funds received by the college going to the cam. Congress increased the amount in 1975 by approving an extra $1 million in funding (Public Law 94-41).

Dwight D. Eisenhower (as President) is portrayed by Frank Gasparro, with the subject looking to the left. The raised “FG” initials of Gasparro are seen in the bust truncation. “IN GOD WE TRUST” is written behind Eisenhower’s chin, to the left.

Coins minted in Denver and San Francisco will have minuscule mintmarks of “D” or “S” above the space between the last two digits of the date, whereas coins struck in Philadelphia will not have a mintmark. The exact placement and orientation of the hand-punched mintmarks on Eisenhower dollars may differ.

The reverse is based on the Apollo 11 Mission Patch created by astronaut Michael Collins. A bald eagle in descent is in the center. An olive branch is held in its talons. It has raised its left wing. Below is the lunar surface. The Earth is pictured over the eagle’s head. North America is clearly seen.

The words “UNITED STATES OF AMERICA” are written around the top of the coin, close to the rim. Around the eagle are thirteen tiny five-point stars in a circle.

The motto “E PLURIBUS UNUM” is displayed above the eagle but underneath the ring of stars. The word “ONE DOLLAR” is written around the edge of the design at the bottom.

The Eisenhower dollar from 1971-S has a reeded edge.

The New York Times Pentagon Papers began to be released in pieces in 1971. The voting age in the US is lowered to 18 years of age upon ratification of the 26th Amendment to the US Constitution. The Walt Disney World Theme Park opens in Florida, while the UK and Ireland adopt decimal currency as a result of decimalization.

How Much Silver Is In A 1971 Eisenhower Dollar?

The Eisenhower Dollar in 40% silver was made available in 1971 in both uncirculated and proof versions by the U.S. Treasury. Since 1935, these were the first “silver” Dollars (or 1964, if one counts the unissued 1964-D Peace Dollar).

Are All 1971 Eisenhower Dollars Silver?

Eisenhower silver dollars were made by all three U.S. Mints between 1971 and 1978, although only two mints produced these coins for general use.

Eisenhower silver dollars for general use were made by the Philadelphia and Denver mints. These coins are clad, which is an alloy of nickel and copper, and therefore only have worth equal to their face value. But from 1971 through 1976, the San Francisco Mint produced 40% silver Eisenhower dollars exclusively for collectors. Therefore, coins bearing the ‘S’ mint mark, dating from 1971 will have silver in their composition. 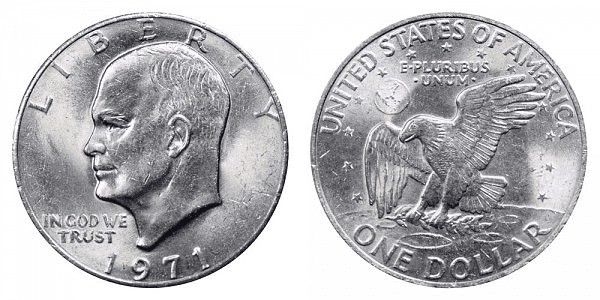 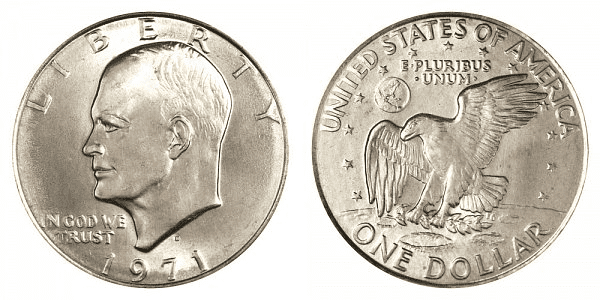 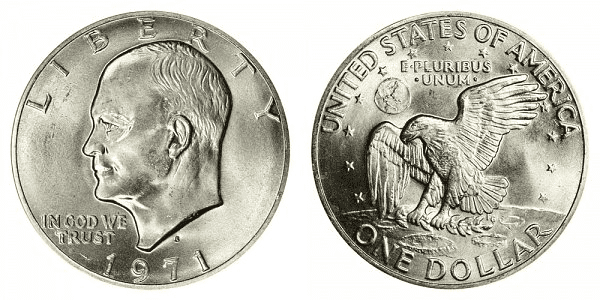 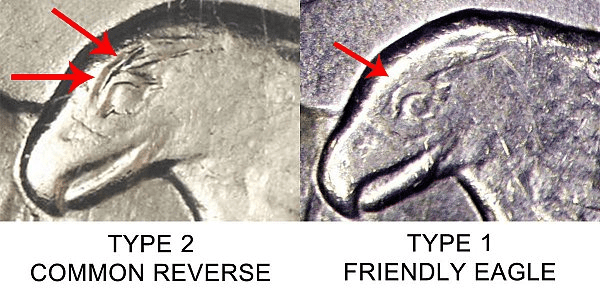 The Type 1 “Friendly Eagle” variety (FEV) of the 1971-D Eisenhower Dollar, also known as Variety 1 or RDV-006, is a significant variety. Only between 500000 and 1000000 of these less frequent species are thought to exist, while the actual number is unclear.

Due to three distinguishing features on the reverse, this coin is quite simple to recognize. Due to a modification in the eagle picture, this coin earned the nickname “Friendly Eagle.” On the typical reverse (type 2), an eagle with a brow line over the eye is depicted. Despite the fact that “Friendly Eagle” (type 1) lacks this brow line above the eye, the eagle appears friendlier and less menacing. 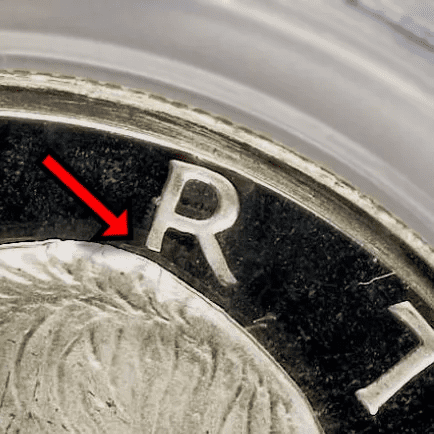 The serifs at the base of the vertical leg on the “R” in LIBERTY are absent on the unusual variation of the 1971 Proof Eisenhower dollar coin struck in San Francisco. Some experts think that over-polishing the Proof dies led to the development of this variant (a.k.a. die abrasion).

Others believe that the master die was produced as a result of a change to the coin hub. Whatever the reason for this die variety, the coin is unusual and sells for more than ordinary strikes.

How Much Is A 1971 Eisenhower Silver Dollar Worth Today?

Where To Buy Or Sell 1971 Eisenhower Silver Dollar?

Clad versions of the Eisenhower dollar can be bought or sold very commonly on online marketplaces like eBay and Etsy. If you have a 1971-D variant of the coin and aren’t too clued up on what to look for, you might want to reach out to a coin collecting forum in order to double check your coin isn’t the more valuable ‘friendly eagle’ variant.

In the case of the silver composition coins, which have a little more value, online marketplaces can still be a good option, but you’ll also find pawnbrokers, and silver dealers can take interest in this coin for its intrinsic metal value.

Where is the mint mark on a 1971 Eisenhower dollar?

The Mint Mark on the Eisenhower Dollar is found below Eisenhower’s neck on the obverse side of the coin.

Why is the Eisenhower silver dollar also called the Bicentennial dollar?

Eisenhower Silver Dollars are sometimes called Bicentennial dollars due to the 1976 year of the coin which coincided with America’s Bicentenary celebrations.

How much is a 1971 Eisenhower uncirculated silver dollar worth?

In uncirculated condition, Eisenhower Dollars are worth around $16.