What Is A 1970 Jefferson Nickel Made Of?

President Jefferson’s bust can be seen on the 1970 nickels, which are made of 75% copper and 25% nickel. The Jefferson Nickel has been the five-cent piece produced by the United States Mint since 1938 when it replaced the Buffalo Nickel. From 1938 to 2004, Thomas Jefferson’s likeness as a founding father and third U.S. President was depicted by Felix Schlag on the coin’s obverse.

The front of the coin has a portrait of Thomas Jefferson (1743–1826), the third President of the United States (1801–1809), looking left with his long hair tied back with a ribbon. FS (for Felix Schlag), the designer’s initials, are found below the shoulder. Around the left is written, “IN GOD WE TRUST.”

In the right-hand corner, a five-pointed star separates the word LIBERTY from the issuing year: 1970. A tiny letter D or S is used as the Denver Mint’s or San Francisco Mint’s mint mark, and it is situated to the right of the image beneath the last digit of the date, respectively.

The major residence that Thomas Jefferson built for himself, Monticello, is depicted in the center of the coin’s back and is surrounded by a straightforward rim. That is followed by its name: MONTICELLO. Around this, the amount and denomination are inscribed in words: FIVE CENTS.

Above is the motto, E PLURIBUS UNUM (from Latin: “Out of many, one”). Below, in larger characters, is the legend UNITED STATES OF AMERICA.

In 1970 the Vietnam War was raging. Millions of Americans participated in fatal protests at home, and university campuses were closed as a result of student strikes. Four protesters were killed by National Guard soldiers at Ohio’s Kent State University.

Due to its plainer metal composition than other coins, the majority of 1970 nickels aren’t worth much today. However, due to the many faults, some S nickels are rare.

The cost of this coin considerably rises if the mint mark is incorrect. Only a small number of double-struck 1970 S nickels were made, making them uncommon.

Similarly, it is very rare to find a perfectly struck 1970 Jefferson Nickel, known as ‘full steps’ an absolutely perfect proof example of this could be worth up to $2000. 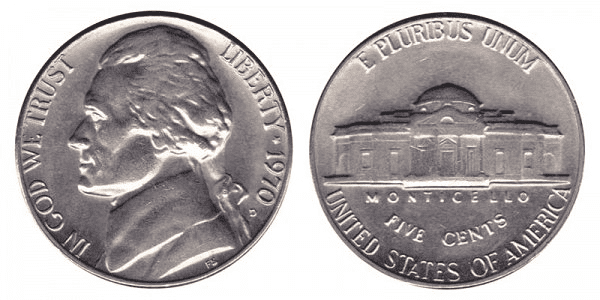 There are several variations of the 1970 nickel with the mint mark defect, and they can be very expensive. Auctions will pay $2,000 for a Jefferson cent with an S mint mark error and an MS 67 grade.

You can potentially possess a 1970 D nickel that has an incorrect mint mark. The value of this coin is approximately $200, however, it might increase depending on how severe the error is. A D nickel, for instance, is worth over $200 if it has more than two die break cuts. 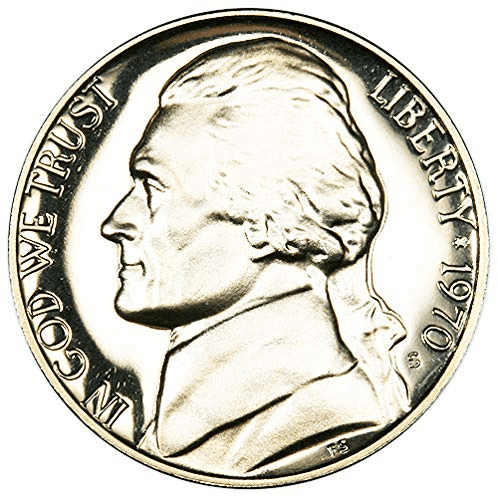 Double striking denotes multiple imprints on the coin. The second strike is usually 45% off-center, which gives the nickel a distinctive appearance and increases its value.

How Much Is A 1970 Jefferson Nickel Worth Today?

1970 nickels’ intrinsic metal value, which is $0.0574, barely exceeds the coin’s face value, meaning that this coin’s worth is derived from factors such as its condition, provenance, errors, and so on.

A 1970 nickel’s face value of $0.05 is its lowest possible value. Because they are in used condition, circulating coins are priced at this level. This nickel can also be sold uncirculated for a higher price of $0.28.

If the nickel is in good uncirculated form, it may be worth $5 or so. A very beautiful item might cost $10. You should be aware that these prices can mostly be obtained via auctioning off the currency.

The 1970 S cent is worth between $10 and $2,000. Even in exceptionally great condition, a circulated coin won’t bring in more than a few dollars. Meanwhile, the price of an uncirculated nickel might reach $2,000 on the open market if it displays exceptional mint quality.

1970 nickels aren’t very sought after because of their low worth unless they have a special feature, such as a mistake or premium condition. As a result, you can still find 1970 Nickels in your pocket change or buy one online for a dollar or two, albeit there isn’t much money to be made from buying or selling these coins aside from sentimental value.

Outstanding 1970 Nickels (such as fine-proof coins) and Nickels with errors can have prices that reach the hundreds and even thousands of dollars.

While certain examples can be found on websites like eBay, it is advised to deal with reputable coin dealers and auction houses like Heritage Auctions for more peace of mind.

Where is the mint mark on a 1970 Jefferson nickel?

The mint mark on the 1970 Nickel is found to the right of Jeffersons’ bust, by his ponytail.

All  Jefferson  Nickel Proof Coins minted in this year were minted in San Francisco, meaning that bear the ‘S’ mint mark.

There are no large or small date varieties for 1970 S or D nickels.