When Congress approved the creation of a new half-dollar design to honor John F. Kennedy, the US Mint sculptors Gilroy Roberts and Frank Gasparro were selected to complete the task.

The final layout was uncomplicated and centered on honoring Kennedy and the nation he served. 1964 saw the initial production of the Kennedy half dollar, which is still in use today.

The American bald eagle’s coat of arms is displayed on its chest, its wings spread wide. An olive branch and a group of arrows are held in the eagle’s talons. “UNITED STATES OF AMERICA” is centered at the top of the coin, while “HALF DOLLAR” is centred at the bottom.

1972 Kennedy Half Dollars are made of a copper center that comprises 75% of the coin’s metal content with a Nickel cladding comprising the latter 25%.

The USA had a somewhat active year in 1972. Mariner 9 is transmitting photographs from Mars while Pioneer 10, the first artificial satellite to leave the solar system, is launched from Cape Kennedy. The Godfather premieres in theatres in the United States. In particular, the Watergate Scandal started in 1972.

How Can You Tell If Your 1972 Half Dollar Is Silver?

While coins up until the late 60s still had some silver content, the coins minted in 1972 had no silver content and were made from a 75% copper, 25% nickel combination.

This means that if your Kennedy half dollar is dated 1972, there’s no need to check for any silver content.

What Does FG Mean On A Kennedy Half Dollar?

Frank Gasparro, who created the coin’s reverse (sometimes known as the “tail’s side”), is designated by the initials “FG” on the Kennedy half dollar.

Gilroy Roberts, incidentally, created the obverse (front or “head’s side”).

The Kennedy half dollar’s reverse was created by Gasparro, whose initials, FG, are found there. In any case, that is where you should look for them.

On a Kennedy half dollar, the FG is typically located on the bottom left quarter, directly between the eagle’s rightmost tail feather and its right leg.

A No ‘FG’ half dollar will have the signature missing from the coin, but for the coin to be viewed as a true ‘no FG’ coin it has to have absolutely no sign of the FG at all. Not even a trace under 5x magnification!

Aside from the missing letters, two other factors may be present in your coin:

You may be asking why Frank Gasparro’s initials, FG, were first omitted from the coin. Nobody seemed to be in pain at Gasparro’s, the renowned coin designer who oversaw the US Mint’s engraving operations from 1965 to 1981. Absolutely by accident!

Employees at the mint occasionally have to buff the damage off the coin when the dies that imprint images on blank coins get damaged. Usually, the process is successful and the clash marks or other damage indicators are immediately polished off. 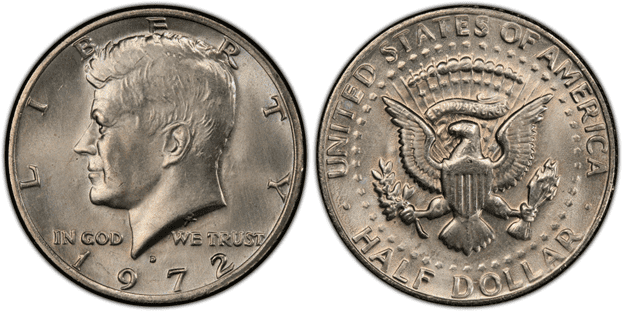 1972 Half Dollar With No Mint Mark 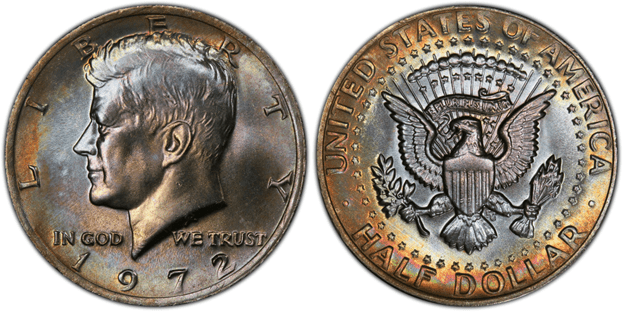 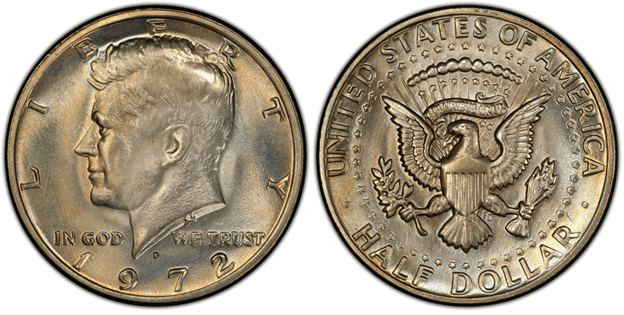 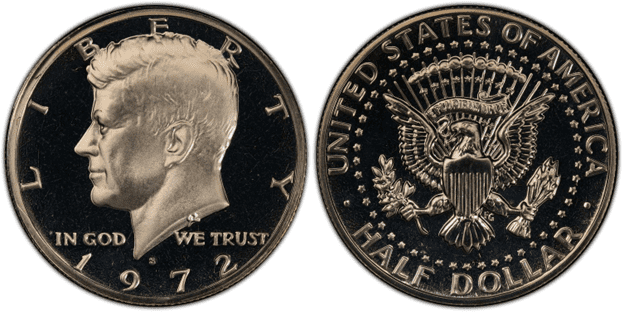 Outside of the ‘No FG’ error coin, there are no other widely recoginized error coins for this year. Instead, the remaining errors are seen on a coin-by-coin basis. Listed below are some common examples seen in these coins: 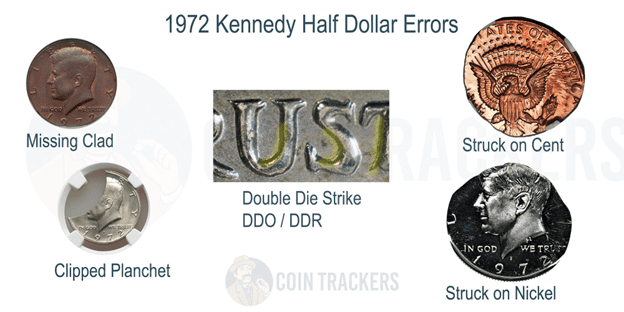 How Much Is A 1972 Kennedy Half Dollar Worth Today?

Because it doesn’t have any precious metal content, Kennedy half dollars made between  1971-2014 have a melt value of only $0.1003423 which is far less than the face value.

Kennedy half dollars without silver content (outside of the No FG error) don’t hold much value, and a proof coin sells for between face value and $15, dependent on condition.

The Philadelphia and Denver mints sell for between face value and around $1.60. As mentioned, the real value of this coin comes in form of the no FG error type, which can be worth upwards of $300.

1972 half dollars were mass-produced and aren’t inherently rare, even 1972 half dollars in exception condition are worth little more than $15. The rarity of this coin comes from any errors or unique qualities seen on a coin-by-coin basis.

Because they are (overall) such low-value coins, you can be pretty confident when buying and selling 1972 half dollars at online auction sites such as eBay and Etsy.

Of course, before you sell any 1972 half dollar be sure to check for the FG signature, as coins without will need to be verified and graded by a service such as PGCS before they can be sold at auction or to a specialist dealer.

Are Kennedy half dollars still made?

Since 2002, half dollars have been produced largely for numismatic products such as annual coin sets. The Federal Reserve may nonetheless decide to put them into circulation.

The mint mark for the 1972 Kennedy Half Dollar is on the Obverse/Front of the coin just below Kennedy’s neck. If no mint mark is present it is a P and was minted in Philadelphia.

Much-loved president John F. Kennedy (JFK) is featured on the 1972 half dollar.

What is the mark on Kennedy’s neck on the half dollar?

Contrary to popular belief, Kennedy’s neck stamp has nothing to do with communist plots or his assassination. Instead, it’s Gilroy Roberts’ elaborate monogram, who worked as the United States Mint’s chief engraver from 1948 to 1964.

10 Most Expensive Tires in the World