Instead of the silver content of the older coins, Washington Quarters have a 91.67% copper core with an 8.33% nickel coating starting in 1968. The image of George Washington facing left on the coin’s obverse was created by John Flanagan using the bust of Jean-Antoine Houdon from 1786 as his model.

The word “LIBERTY” is engraved around the top of the coin and over Washington’s hair. The year “1970” is etched around the bottom of the George Washington bust that has been shortened.

To the left of Washington is the slogan of the nation: IN GOD WE TRUST.

The coin’s reverse has an Art Deco heraldic-styled eagle perched on a bundle of arrows. The arrows and the head of the eagle both point to the left.  “United States of America” is printed all the way around the top of the coin, and two sprays of olive branches arranged in the shape of a U surround the base of the eagle.

Below it is the motto E PLURIBUS UNUM. On the coin’s base, the word “QUARTER DOLLAR” is printed. The edge of the 1970 Washington quarter is reeded.

The Vietnam War was in full swing in 1970. Millions of Americans took part in violent protests at home, and student strikes caused university campuses to close. At Kent State University in Ohio, National Guard members shot and killed four demonstrators.

1970 Quarter With No Mint Mark 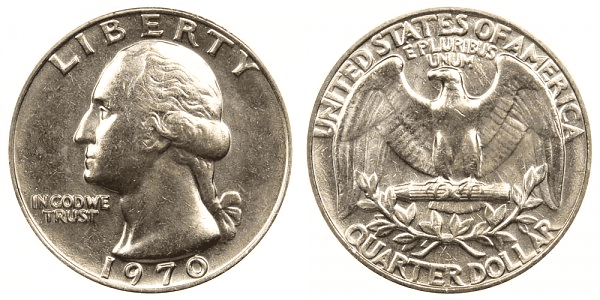 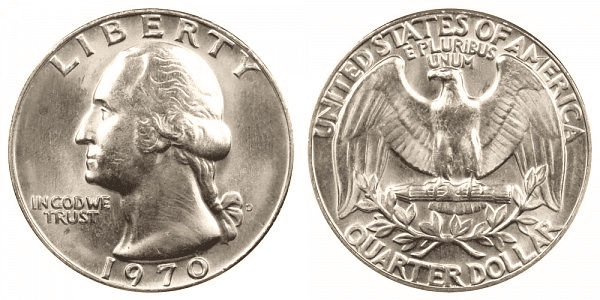 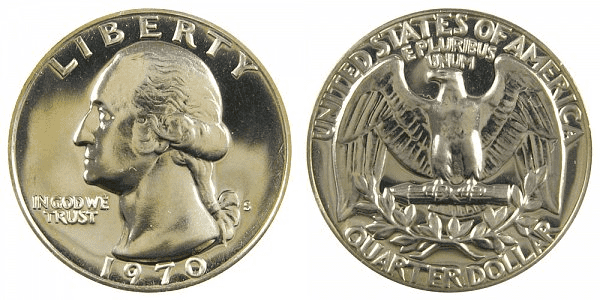 Some of the strangest coins you will ever see can be error coins. When the coin blank isn’t fully inserted into the press, the coins come out of center. As a result, the design is pushed out of the center and part of the coin is left smooth. The value of a coin increases with the degree of off-centering.

A double strike and an off-center strike are combined in one exceptionally bizarre 1970-D quarter. This coin, which was graded MS64 and was “Double Struck – Second Strike 70% Off-Center,” sold for $1,020 in 2021. 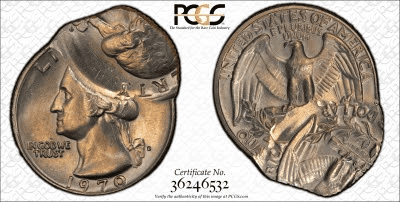 When this quarter was struck, the obverse die was a little loose and turned a touch before the second strike.

The 1970-S quarter struck on an 80% silver 1941 Canadian quarter is the most well-known and expensive 1970 error quarter. This rare coin has a whooping $35,000 value according to appraisal

One of the best coin grading services in the world, the Numismatic Guaranty Corporation (NGC), assigned this one-of-a-kind coin a PF65 grade. Mike Byers, an expert in mistake coins and author, is the owner. He described the coin as “one of the most fascinating and intriguing proof mint errors ever discovered.”

This error occurred when, somehow, the Washington Quarter design was struck onto metal used for the 80%  silver 1941 Canadian Quarter (some of the details of the previous coin can still be seen through the over strike). It’s not known quite how this happened, but it’s certainly one interesting mix-up at the San Francisco mint. 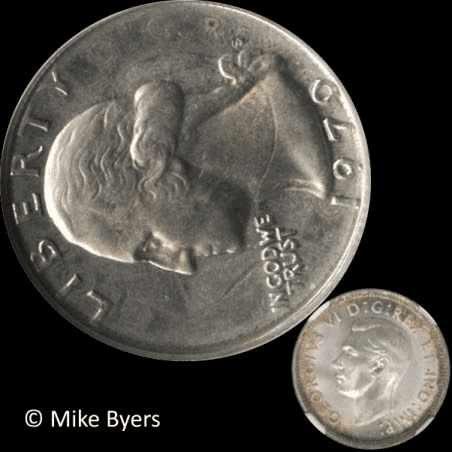 There is a second infamous overstrike of a 1970-S quarter, also on a Canadian coin. The quarter in question was minted on top of a silver Canadian George V quarter. Sadly, Washington’s neck hides the date, but the other details are clearly visible. In August 2020, this one-of-a-kind proof mistake coin, which NGC graded PF64, sold for $7,800.

The 1970-S quarter produced on a Philippines 25 centavo currency is another rare 1970 mistake coin. This coin has what Heritage Auctions refers to as a “brassy” appearance, making it one of the simpler proof mistake coins to identify. In 2010, it sold for $4,600 and was rated a proof PR64.

In general, it’s pretty easy to tell if you have a rare coin on your hands if you know what the coin should look like, that is, as the rarest errors are those that are most obvious, such as the  examples above as they represent the most dynamic deviation from the original coin.

A 1970 quarter’s low $0.052 melt value shows that any value (beyond the face value) attached to this money comes from factors like condition, defects, and provenance. Due to the absence of precious metal, this coin has no melt value. The primary value of these coins, barring rarities, is decided by their condition, with the exception of MS-grade coins, which are only worth their face value because they are still in circulation.

As mentioned, outside of rare errors these coins have little more than their face value unless they are in incredible condition. Uncirculated proof coins are worth about $4.52, while MS65 Grade 1971-P and 1971-D coins are worth up to $7.88 and $5.70 respectively.

If you have a 1970 quarter in your collection, it could be worthwhile to examine it carefully to check for any flaws or distinctive traits before you consider selling. There are various 1970 quarters to watch out for, such as those listed above, though these are exceptionally rare.

Regular 1970 quarters can be bought or sold for a few dollars on websites like Etsy and eBay. You can post an image in a forum for coin collectors to ask for help if you’re unsure but think you might have something unusual.

Dealing solely with reliable, specialized sellers like Heritage Auctions. will help you avoid fraud while buying and selling rare 1970 quarters.

Are all 1970 quarters valuable?

No, not all 1970 Quarters are valuable as the coin itself only has an intrinsic metal value of little more than its face value. The valuable 1970 quarters are those in excellent condition as well as those with the errors mentioned in the article.

No, not all 1970 quarters have an error. There are also no reported national errors seen in this coin meaning the errors that you may come across are on a coin-by-coin basis.

While an exciting idea and definitely seen in modern times and reproductions, there’s no evidence showing 1970 Quarters being used as spy coins.