Kennedy Half Dollars are still made today, despite the fact that they are hard to find in circulation.

The US Mint sculptors Gilroy Roberts and Frank Gasparro were chosen to accomplish the assignment when Congress authorized the production of a new Half Dollar design to honor John F. Kennedy.

The ultimate design was straightforward and focused on paying tribute to Kennedy and the country he served. The Kennedy half dollar was first produced in 1964 and is still in circulation today.

A bust of John F. Kennedy facing left appears on the coin’s obverse. The phrase “LIBERTY” is aligned along the top of the coin, and the words “IN GOD WE TRUST” are split at the bottom of Kennedy’s neck.

The mintage date is located at the very bottom of the obverse, centered.

The president’s coat of arms is on the chest of an American bald eagle with its wings outstretched. In the eagle’s talons are a bundle of arrows and an olive branch. At the top of the coin, “UNITED STATES OF AMERICA” is centered, while “HALF DOLLAR” is centered at the bottom.

The Philadelphia Mint estimates that 295,46,000 Kennedy half dollars were produced in 1967. The majority of these coins are still in use or have been melted for their minor silver value.

Kennedy half dollars were manufactured with 60% copper and 40% silver from 1965 to 1970. A total weight of 11.50 grammes and a diameter of 30.6 millimeters resulted from this combination. The coin’s edges are reeded.

The Vietnam War was already underway in 1967. The American Basketball Association is founded, and Charlie Chaplin releases his final picture. Chicago experiences its largest-ever blizzard.

Closely connected to the half-dollar itself, The body of U.S. President John F. Kennedy is moved to a permanent burial place at Arlington National Cemetery.

Does The 1967 Half Dollar Contain Silver?

The weight of silver is expressed in troy ounces. Troy ounces are 2 grammes heavier than standard ounces. Kennedy half dollars struck in 1967 are 40 per cent silver, containing.1479 troy oz or 4.600 grammes of .999 pure silver in total.

All Kennedy dollars created in 1967 are made of 40% silver, so if the year of the coin is 1967 you can be pretty confident about its silver content.

To be 100% sure, try inspecting the coin’s edge as this is where the coin experiences the most wear and means that any cladding is likely to have worn thin and reveals any base metal hiding underneath.  A reddish-brown stripe will appear if the coin contains copper.

If you notice a definite silver stripe instead, you can be sure your Kennedy half dollar contains silver.

When categorizing coins minted between 1965-67, you won’t find any mint mark. Does that mean all coins were minted in Philadelphia? Not necessarily, but it’s pretty impossible to tell on a coin-by-coin basis.

Known as the period of ‘anonymous’ coins, this phenomenon represented some of the darkest days in coin collecting.

The speculative market in modern coins had collapsed by the end of 1964, and Congress and the media were blaming coin collectors for the acute statewide coin deficit.

As a result, proof coinage and the use of mintmarks were suspended by Congress. All of these precautions were put in place to make it difficult for people to save new coins.

Although history demonstrated that it was not coin collectors who were to blame for the coin shortage, but rather a defective distribution process that left coins sitting inactive for weeks at a time, the evidence of this fascinating piece of currency history still exists in the unminted 1967 half dollars.

1967 Half Dollar with no mint mark 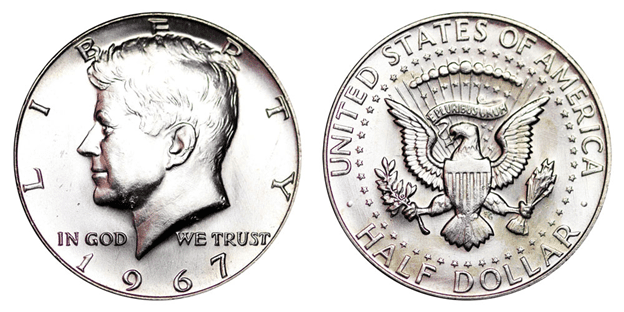 There are no widespread errors found in the 1967 Half Dollar, meaning that the errors discovered are on a coin-by-coin basis.

Here are some examples of error coins that have been placed on the market in recent years: 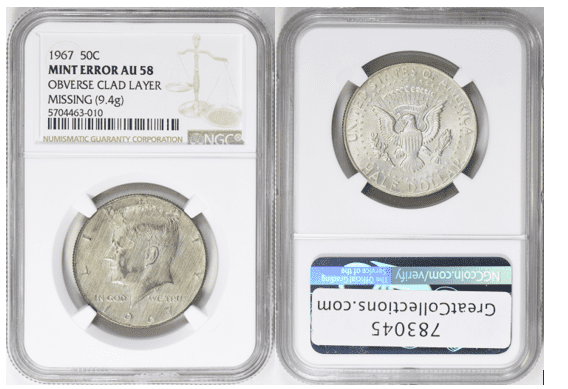 This error coin was created when the cladding process was skipped on the obverse or ‘head side’ side of the coin. Because of this, the obverse side differs in tone, has a grainy texture, and reduced detail. This coin was recently sold at auction for a respectable $126. 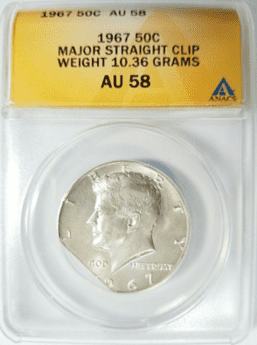 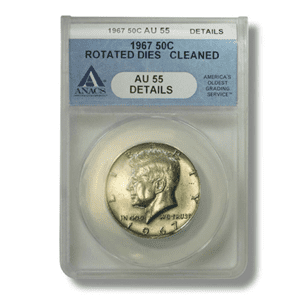 Coin alignment is used on all US Mint coins. That is, the reverse will be properly orientated when the coin is flipped from top to bottom. This is the polar opposite of medallic alignment, in which the obverse and reverse are both orientated in the same direction as seen in this error coin for sale at $400. 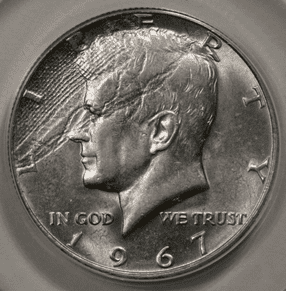 When a foreign object or substance gets onto a die or blank and leaves an impression on the coin, it’s called a strikethrough. In the case of this error coin, a piece of fabric; maybe a rag that was used to clean the die has been stamped into the coin to the point where the fine details on the weave can be seen.

Because of the rarity of this kind of error, the seller of this error coin is asking a whopping $2,500.

This coin is worth at least its weight in silver in circulating condition. As of June 14, 2022, the silver melt value of this coin is $3.13. The current silver spot price of $21.17 per ounce is used to compute this melt value.

Due to a lack of mint marks and proof variants, valuing the Kennedy half dollar is pretty straight forward and all comes down to condition, and whether or not an error is found on the coin.

As mentioned, the 1967 Kennedy half dollar is worth more than its face value with a $3.13 melt value.

As mentioned, due to the limitations placed on coins by congress during this period, no proof, SMS, or mint-marked coins were made, which means that the standard rarities you might be looking for don’t exist.

Instead, random errors and mint condition coins will be those that are deemed ‘rare’ and command higher values.

Because of the limited quantity of rare or exceptional coins seen in this mintage year, most examples of 1967 Half Dollars can be bought and sold on online marketplaces, such as the examples from eBay mentioned above.

It’s only if you suspect that you have a coin with exceptional qualities that specialist shops, auctions, and dealers should be considered.

If you’re not sure about the rarity of your 1967 half dollar, then coin collecting communities such as the U.S. Coin Forum.

Where is the mint mark on a 1967 Kennedy half dollar?

The Kennedy Half Dollar doesn’t have a mint mark due to regulations made by congress in an attempt to quash the massive upsurge in coin collectors.

Yes, the Kennedy Half Dollar is constructed of 40% silver and 60% copper.

How much is a 1967 Canadian half dollar worth?

The 1967 Canadian silver dollar is currently selling for around $15-$20 USD on eBay and features a howling wolf on its reverse. This value is largely thanks to the 3oz of silver that the coins contain.