The history of pocket knives predates the invention of the pocket. Archaeological evidence suggests that pocket knives have been used by human beings since the early iron age. The earliest known pocket knife was found in Austria. This pocket knife with a bone handle was made sometime around 600 – 500 BCE.

Pocket knives are compact and handy; they help us complete various petty tasks in our daily lives. They can also make excellent self-defense weapons.

Carrying or possessing a standard pocket knife is usually not restricted by law. It can be prohibited in certain places, such as school grounds, courthouses, public buildings, and public events.

When we think about pocket knives, we usually do not imagine something expensive. However, the price can go up dramatically for a pocket knife made as a collectible. The price depends on its design, material, and exclusivity. 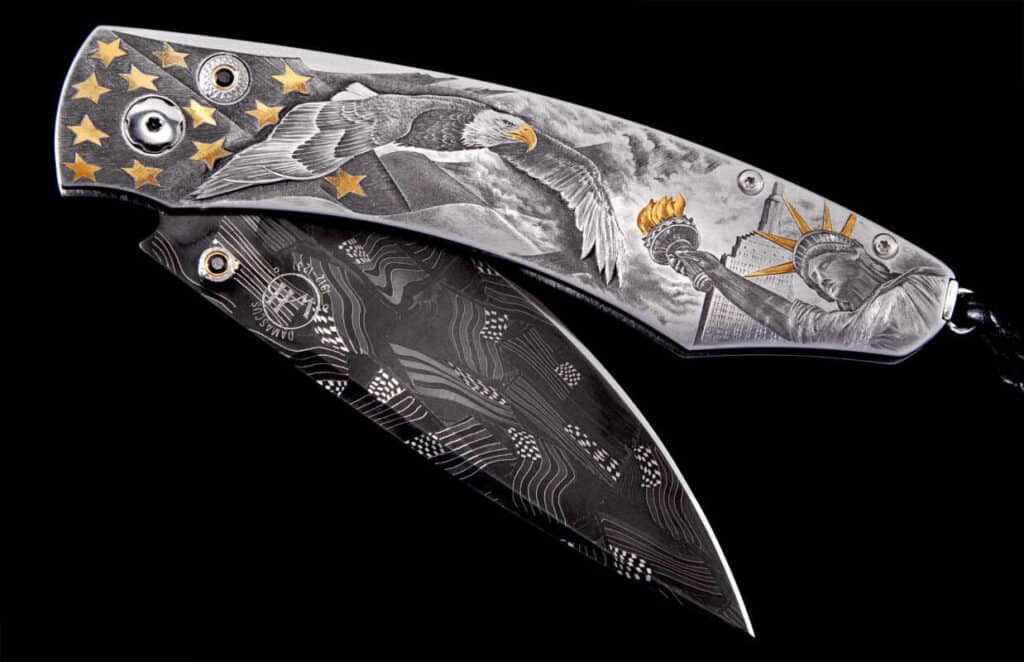 The Spearpoint American Pride III features a hand-forged “Flag” Damascus steel blade etched by Chad Nicholas. The handle of the knife is made with top-graded stainless steel and inlaid with yellow gold.

The bolster features various images that serve as symbols of American Pride, including the Statue of Liberty, the American Bald Eagle, and stars from the American flag. The thumb stud and button locks are studded with spinel gemstone.

Spinel is a natural gemstone that comes in various colors. Timur’s Ruby and Côte de Bretagne are two of the most famous spinel gems. The former is currently part of the British Crown jewels, and the other one was once a part of the French Crown jewels. 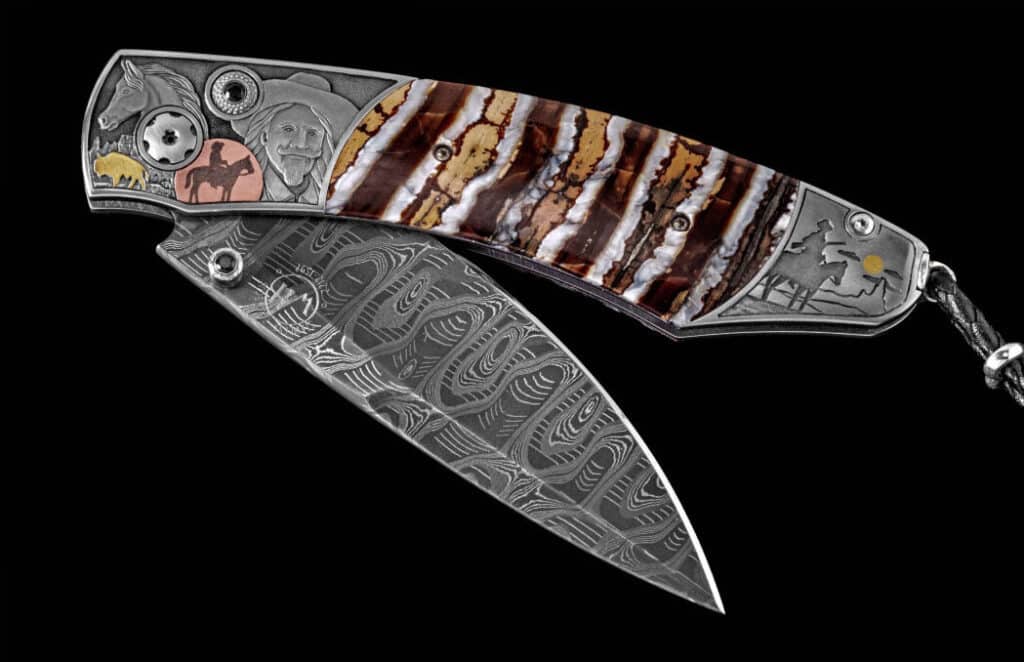 The case features copper and gold inlays by Steve Adams. It depicts elements commonly associated with the Wild West. The blade is made with Damascus steel featuring Hornet’s Mest pattern, a signature style of Mike Norris.

The woolly mammoth is the third-most depicted animal in the pre-historic art. The first two are horses and bison. 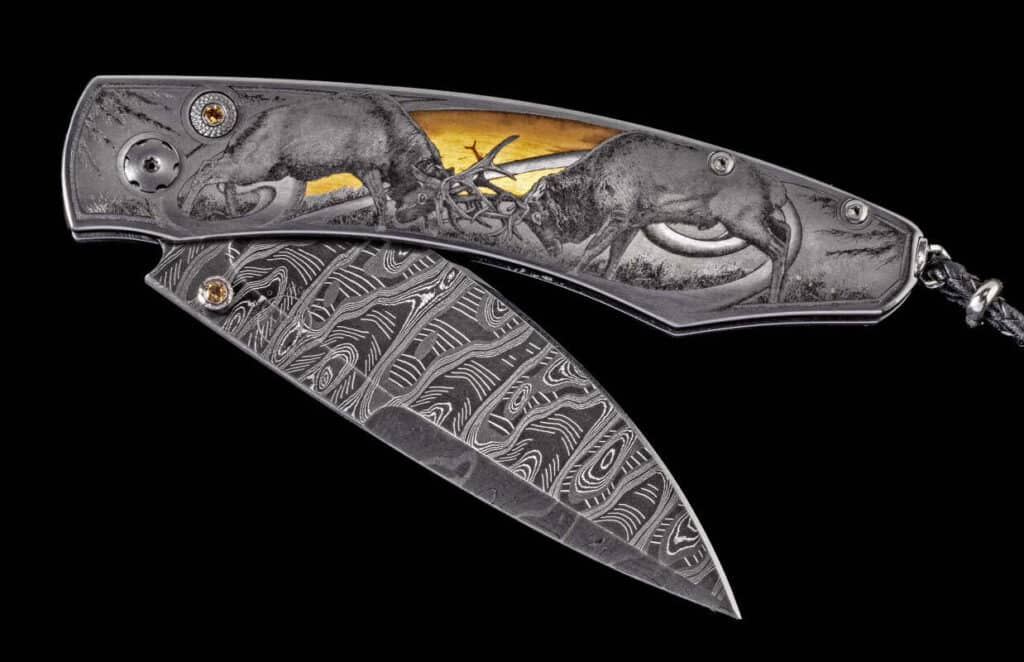 The frame is finely hand-engraved by Giorgia Contessa. The design on the frame features 24K yellow gold inlays. The blade is similar to that of Wild West II. The button lock and thumb stud are set with citrine stones.

Like all other exclusive William Henry pocket knives, this knife also comes with a leather carrying case and is shipped in a wooden presentation box.

All William Henry knives are produced exclusively in limited, often unique editions. The offering size for its largest and least exclusive models is 1000. 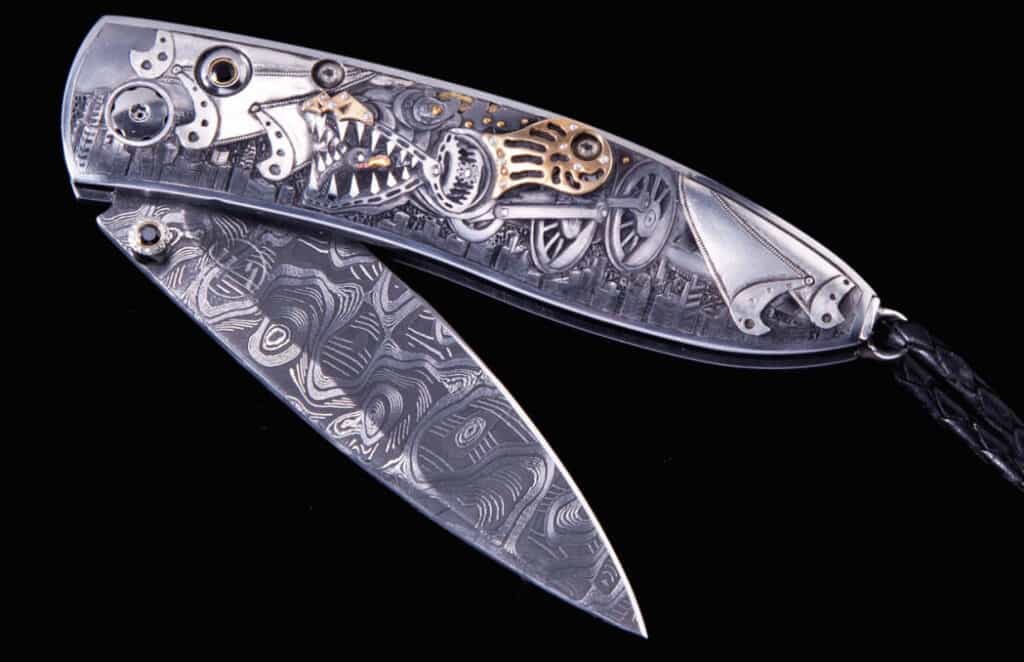 It features Hornet’s Nest Damascus blade, handcrafted by Mike Norris. The bolster is hand-engraved by Mark Hoescht with gold, silver, and copper inlays. The thumb stud and the one-hand button lock are decorated with precious spinel gems.

The company’s website says, “This stunning ‘one-of-a-kind’ features a rich and intricate balance between elegance, function, and superlative artistry”.

William Henry was established in 1997 by Matthew William Conable and Michael Henry Honack. The company’s name is a combination of the middle names of both founders. 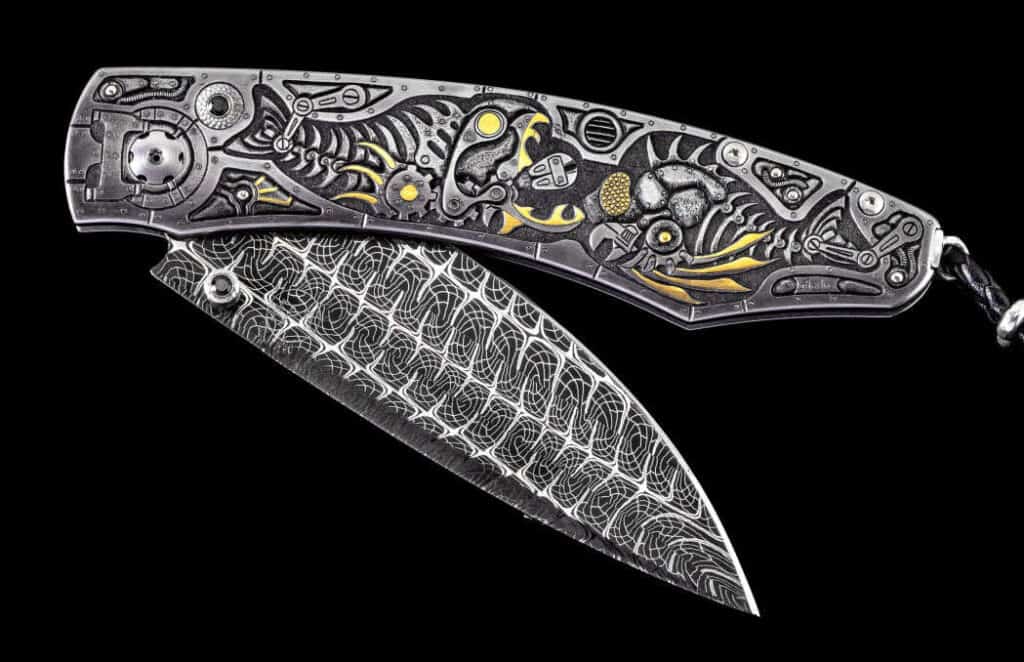 The next on our list is the Spearpoint Steampunk Sea Life pocket knife made by William Henry. Same as the Steampunk Dragon knife, the thumb stud and the one-handed button lock of this knife are set with spinel gemstone.

The case is made of stainless steel and engraved gold inlays by Tom Sterling. The blade features Barbed Wire Damascus steel, etched by Robert Eggerling.

All William Henry knives are made with Damascus billets that are forged with a minimum of 300 layers. 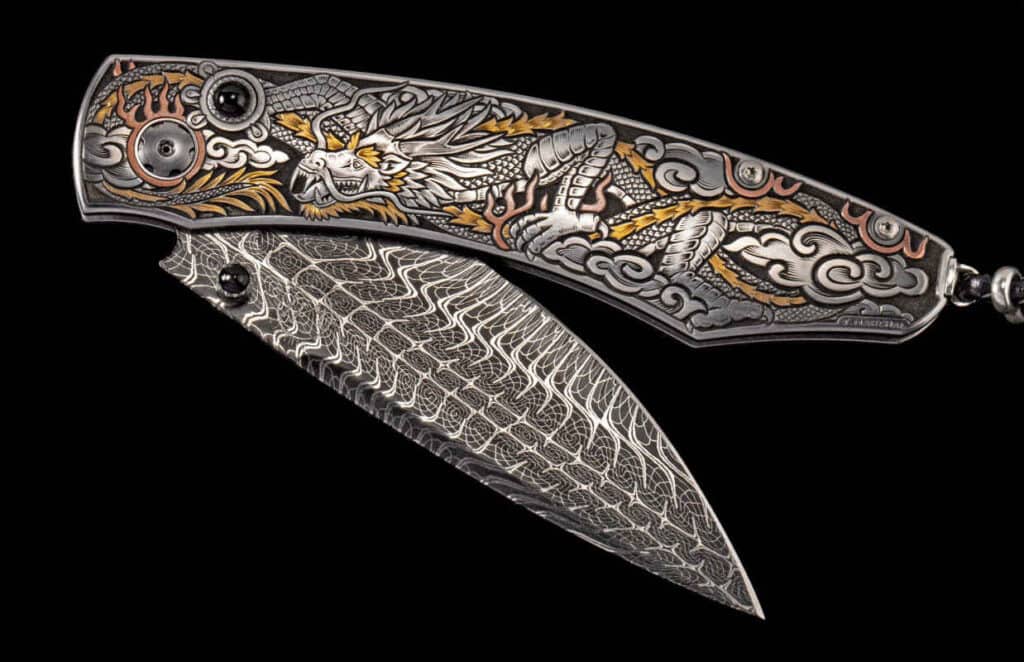 Spearpoint Horned Dragon pocket knife features a bolster made with stainless steel, while the blade is the same as that of Steampunk Sea Life.

The case is inlaid with gold, silver, and copper, beautifully engraved by Julien Marchal. The thumb stud and the button lock are studded with black onyx gemstone.

The company’s website reads, “The ‘Horned Dragon’ features some of the most exotic materials, artistry and forged metals that are the hallmark of William Henry’s collections; a timeless heirloom to be proudly worn and used for a lifetime before being handed down to another generation.” 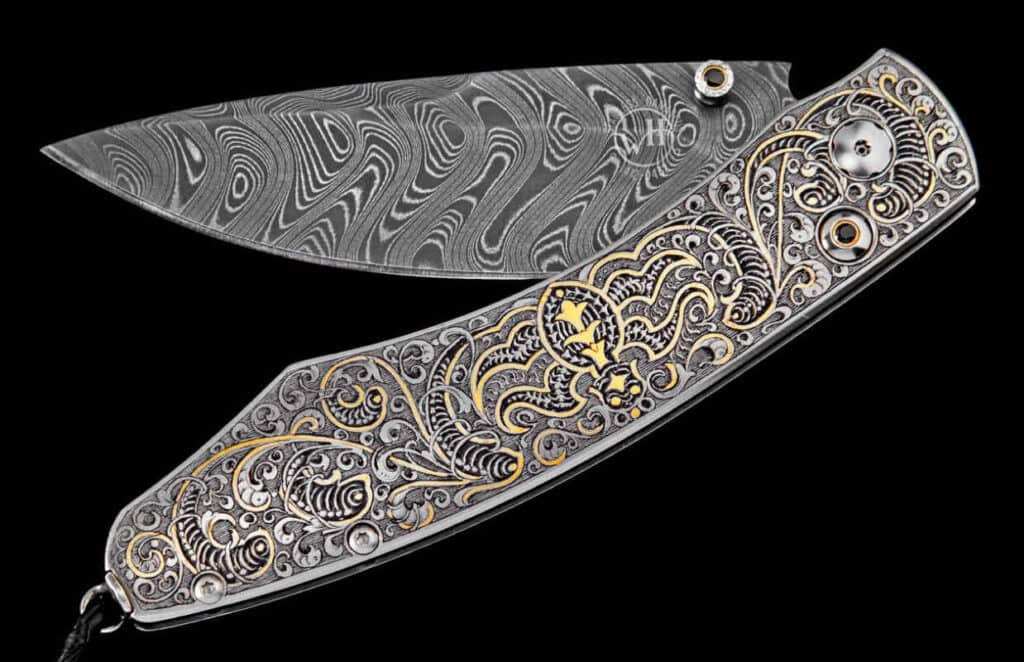 It is yet another gorgeous knife made by William Henry. The blade is Boomerang Damascus steel hand forged by Chad Nichols. The bolster features gold inlays beautifully hand-curved by Mario Terzi. The blade is 3.6 inches long, and the handle is 4.13 inches.

The thumb stud and button lock have spinel gemstones. The knife offers a full-size secure grip and a versatile deep-belly blade, a signature style of William Henry. 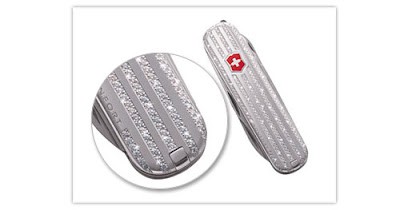 The case is made with pure platinum 950, and each tool is studded with tiny diamonds. The knife has a total of 430 diamonds adding up to four carats. Vitorinox also made a cheaper version of this knife, replacing the platinum with yellow gold. That was priced at $50,000.

The name Swiss Army Knife was coined by US soldiers during WWII as they found it difficult to pronounce the name Offiziersmesser, the German word for “officer’s knife”. 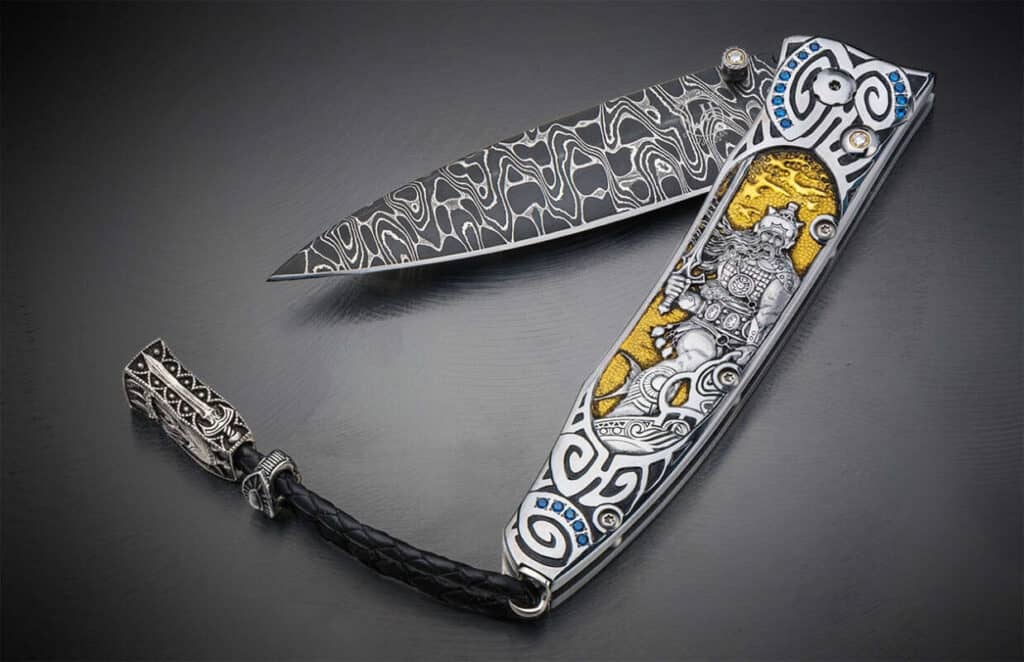 GenTac Silver Warrior is the most expensive pocket knife ever made, with a price tag of $75,000. It was made as part of a collection honoring the works of Frank Frazzetta. Besides this designer pocket knife, the collection also included men’s jewelry, such as pendants, necklaces, bracelets, and a ring.

The knife pays homage to Frazzetta’s one of most celebrated works, The Silver Warrior painting from 1972. The frame features the Silver Warrior and his polar bears with inlays of gold and blue sapphires. It is hand engraved by Aleksey Saburov.

The thumb stud and lock buttons are encrusted with diamonds. The blade made with Damascus steel is handcrafted by Chad Nicholas.

Frank Frazzetta is often referred to as the “Godfather of fantasy art” for his elaborate contributions to science fiction and fantasy art. He is renowned for his paintings and artworks for comic books, posters, record album covers, book covers, and others.

8 Most Expensive Face Creams in the World