In 1938, the Jefferson Nickel was introduced to replace the Buffalo Nickel, which had been in use since 1913.

The obverse side of the coin depicts an image of Thomas Jefferson, who was the 3rd president of the United States from 1801 to 1809, as well as the inscription ‘IN GOD WE TRUST.’

Both the obverse and reverse sides were designed and sculpted by Felix Schlag.

The back of the coin features a rendering of Monticello, President Thomas Jefferson’s Virginia residence, along with the letters ‘E PLURIBUS UNUM,’ (translation: out of many, one), ‘MONTICELLO,’ ‘FIVE CENTS,’ and ‘UNITED STATES OF AMERICA.’ The 1967 Jefferson nickel has a 5 cents face value and smooth edges.

The 1967 Nickel is made up of 75% copper and 25% nickel cladding, giving it a silver tone without any silver content found in the coin.

107,325,800 1967 Nickels were minted in Denver, San Francisco, and Philadelphia, but due to the move by congress to prevent coin collecting, feature no mint marks. (Mint Marks would resume in 1968).

However, unlike the last couple of years in this dark time of coin collecting special mint sets, (SMS), often deemed by coin collectors to be of lower quality than proof sets, which had become banned, were struck this year.

In 1967, the Vietnam War had already begun. The American Basketball Association is established, while Charlie Chaplin’s final film is released. The city of Chicago is hit by the worst blizzard it has ever seen.

The body of US President John F. Kennedy is relocated to a permanent burial location at Arlington National Cemetery. 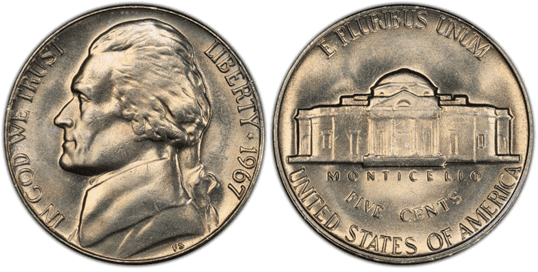 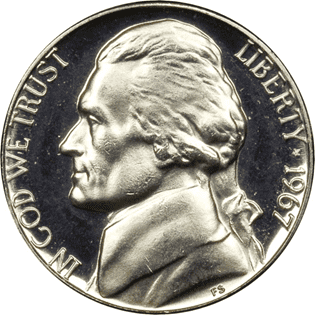 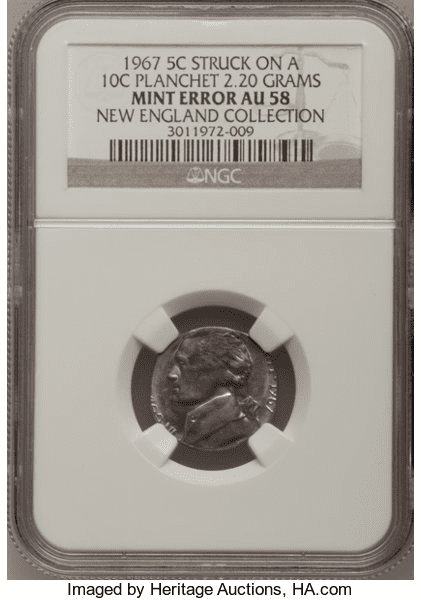 The most basic type of planchet error occurs when the wrong planchet is fed into the press. Only planchets of the correct or lesser size can be struck within the press since both the loading tube and the die collar are sized for the appropriate denomination of coin.

This means that quarter dollar dies can strike a dime planchet, but dime dies cannot strike a quarter dollar planchet because it will not fit into either the feeder tube or the collar. In the above example, the 1967 Nickel has been struck on a Dime planchet, leading to much of the design being clipped away.

The melt value of the 1964 Nickel is roughly $0.0567 due to its lack of precious metal content, meaning that there is essentially no value in melting down this coin.

Nickels from 1967 are available for purchase and sell in a number of ways. Because they’re still in circulation, you might find one or two in your pocket change.

Of course, eBay and Etsy are great places to look for basic, circulated coins. Check the coin for any minor flaws, such as 5 clear steps on the Monticello building, before selling it, as this might raise the value of your currency.

If you’re unsure, or if you think you have an exceptional coin, have it appraised by an expert, either in person or via an online professional.

What is the value of a 1967 Canadian nickel?

In circulated condition, the 1967 Canadian Nickel which features a rabbit in its design has a value of $10-25c.

What year of nickels are worth keeping?

Jefferson Nickels, sometimes known as War Nickels, were issued between 1942 and 1945 and contained 35 per cent silver. This indicates they are worth more than face value and have been taken out of circulation for the most part.

SMS 1967 Nickels, 1976 Nickels will full steps, and 1967 nickels which exhibit errors are the rarest types of this coin.