The Roosevelt Dime, which has been in circulation since 1946, commemorates President Franklin D. Roosevelt’s support for the March of Dimes and his efforts to eradicate polio.

After being commissioned by Congress to develop a new dime in 1945, Chief Engraver John Sinnock created the design. In 1946, Sinnock’s design was introduced, replacing the preceding Winged Liberty Dime.

A right-facing bust of President Roosevelt is centered on the obverse. Along the right margin and right field, the mottos “LIBERTY” and “IN GOD WE TRUST” may be found. The bottom left of Roosevelt’s bust bears Sinnock’s initials and the date of mintage.

The principal design on the reverse of the coin includes a flame symbolizing liberty. There is a single set of olive branches, one on either side of the flame.

Between each of the branches and the flame is the ancient motto “E PLURIBUS UNUM.” Above and below the design are the words “UNITED STATES OF AMERICA” and “ONE DIME.”

Only the Philadelphia Mint was responsible for minting the Roosevelt Dime in 1967, hence none were produced in Denver or San Francisco.

The Mint in Philadelphia was forced to create all of the Roosevelt Dimes for that year, and they produced 2,244,007,000 of them. For the first time in mint history, only one branch produced more than two billion Roosevelt Dime coins.

In the United States, race riots expand to Washington, D.C. Businesswoman Muriel Siebert becomes the first woman to buy a seat on the New York Stock Exchange, and the Big Mac, the iconic hamburger, is created.

Due to the increasing cost of the metal and the demand for silver-based coins from collectors, from 1965 onwards, all Dimes were made of 75% copper with 25% nickel cladding, which is what gives it its silver tone. 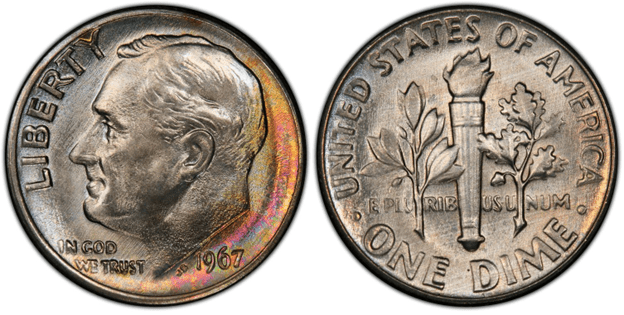 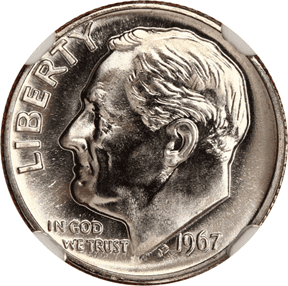 There are no widespread errors that are unique to the 1967 Roosevelt Dime. However, there are some common error examples seen across the dimes mintage years. 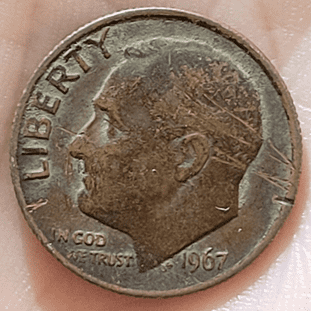 Due to the removal of any silver content, the 1967 Dime only has a melt value of $0.024, meaning that its face value is worth 5 times more than its melt value. This means that the only real value that 1967 Dimes have is their collectable value and not its intrinsic metal value.

Listed below are the expected values for a regular strike 1967 dime of varying grades.

Most 1964 Dimes are sought after by newbie collectors and those who appreciate the nostalgic aspect of the mintage year because of its commonality and lack of intrinsic metal value.

As a result, internet marketplaces like eBay and Etsy are ideal for purchasing and selling 1967 dimes.

Specialist sites like Vcoins sell and buy more valuable Roosevelt dimes, such as error specimens or those of high-quality mintage.

1967 Canadian Dimes feature a Fish in their design. As they contain a small amount of silver, Canadian Dimes are worth more than American dimes and can be worth between $0.73 and $2.70.

There were no mint marks on all US coins from 1967 due to the congresses decision to remove all mint marks from coins starting in 1965 to hopefully reduce the booming hobby of coin collecting.

There is no mint mark on 1967 dimes, and all examples of this coin were minted in Philadelphia for the first time in history.