What Is The 1976 Kennedy Half Dollar Made Of?

The 1976 half dollar is a special kind of coin because it coincides with the 200th anniversary of the United States Declaration of Independence. As a result, you don’t actually see a Kennedy half-dollar with only 1976 as its date; rather, what you’ll see is a double date, 1776-1976. 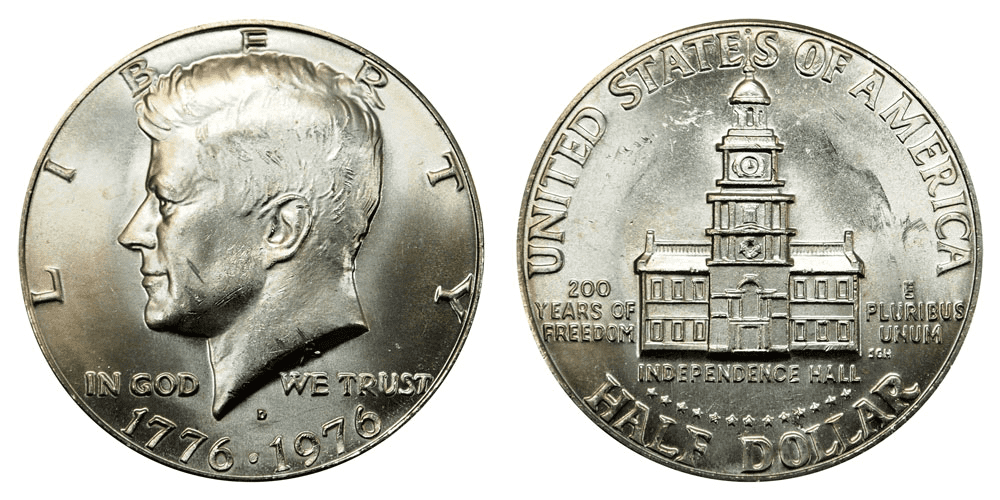 The 1976 dollar is a commemorative bicentennial coin with a unique reverse design. So, there are a few variations of the coin.

The standard 1976 dollar is made of 75% copper and 25% nickel. The core is copper while the coin is clad with nickel. However, you need to know that Congress in 1973 gave their approval to the U.S. Mint to produce a silver-clad version of the half-dollar coin.

When it comes to the design, the obverse features the left profile of John F. Kennedy. Inscriptions include the following:

Kennedy was sadly assassinated in 1963. The nation’s grief and mourning led to the redesign of the half-dollar. Thus, it now bears the portrait of the deceased president.

Gilroy Roberts, the previous U.S. Mint Chief Engraver, designed all the Kennedy half dollars obverse side. He based his design on President Kennedy’s inauguration medal.

On the reverse side, normally, you will see the presidential seal that features the familiar eagle. However, as mentioned above, the 1976 Kennedy half-dollar has a different design.

Here are the inscriptions you’ll find on the reverse of the 1776-1976 Kennedy half-dollar:

The reverse side of the commemorative 1976 coin was designed by Seth Huntington after winning the competition held by the U.S. Mint.

Is The 1976 Kennedy Half Dollar Silver?

Yes, the 1976 Kennedy half dollar is made of silver, but not all of them. As a special commemorative bicentennial coin, the U.S. Mint produced silver-clad half-dollar coins as well as nickel-clad coins. The silver version, which is 40% silver and 60% copper, was sold to coin enthusiasts and collectors while the copper-nickel version was added for circulation.

1976 Kennedy Half Dollar Rarities And Varieties

There are different half dollar coins minted in 1976. Most of them differ based on their mint mark. Moreover, some coins also have some errors, making them rare and unique.

Here are some of the varieties you’ll find in the 1976 Kennedy half-dollar. 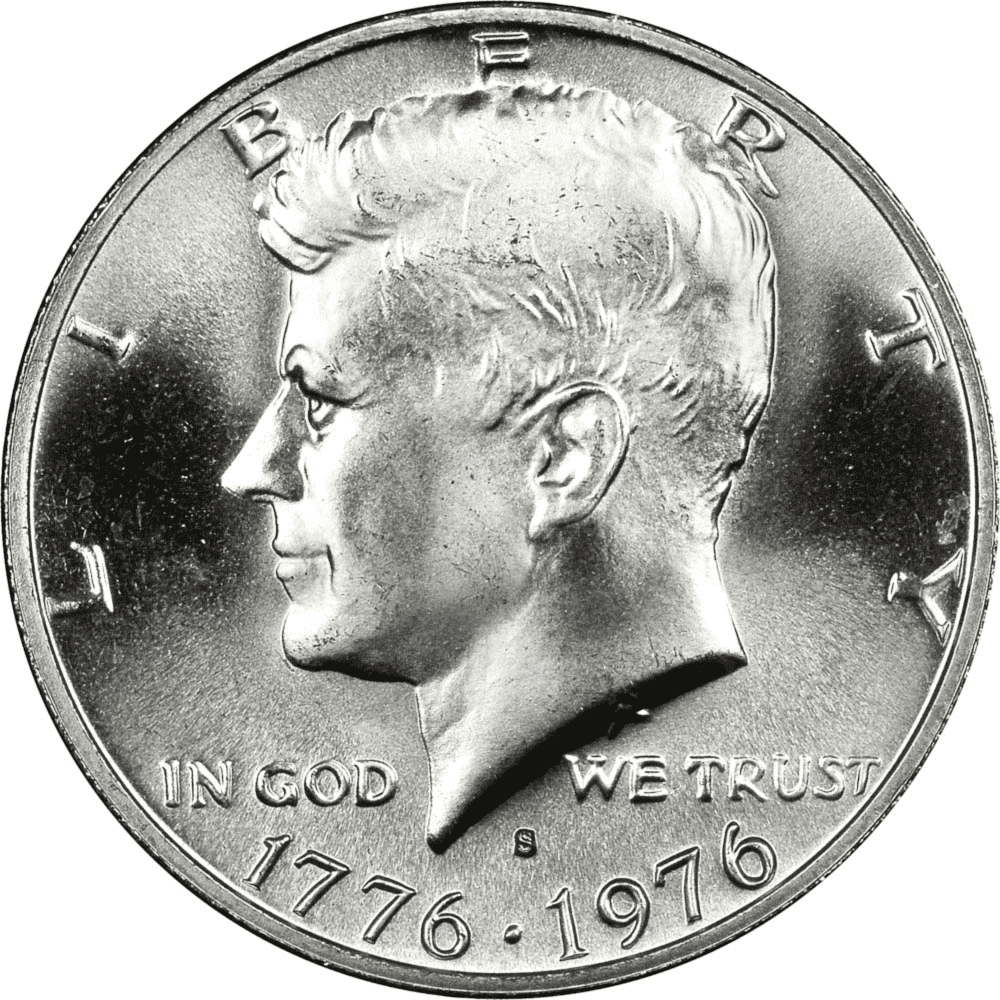 The 1976-S Kennedy Half Dollar was produced in the San Francisco Mint. A coin like this in the mint state can be sold for up to $8 or more. 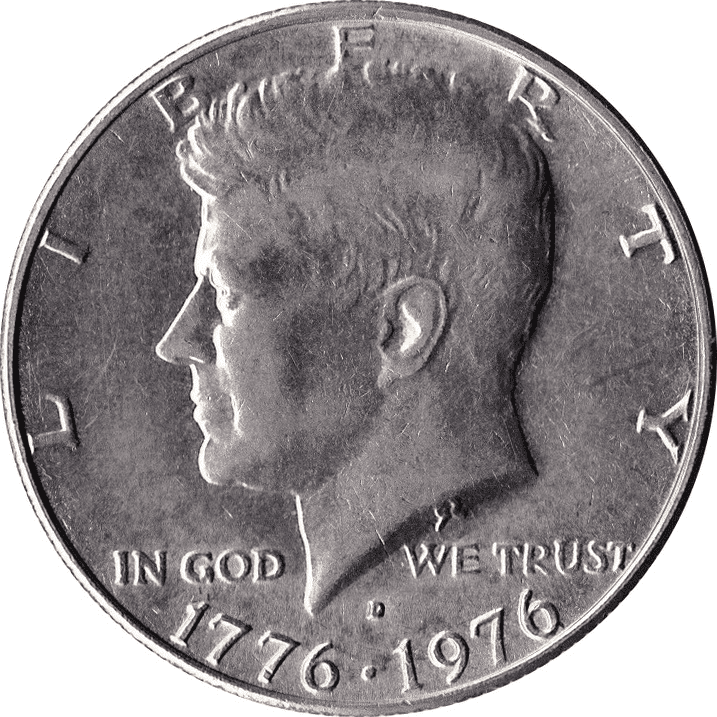 The 1976-D Kennedy Half Dollar was produced in the Denver Mint. A coin like this in the mint state can be sold for up to $2.5 or more. 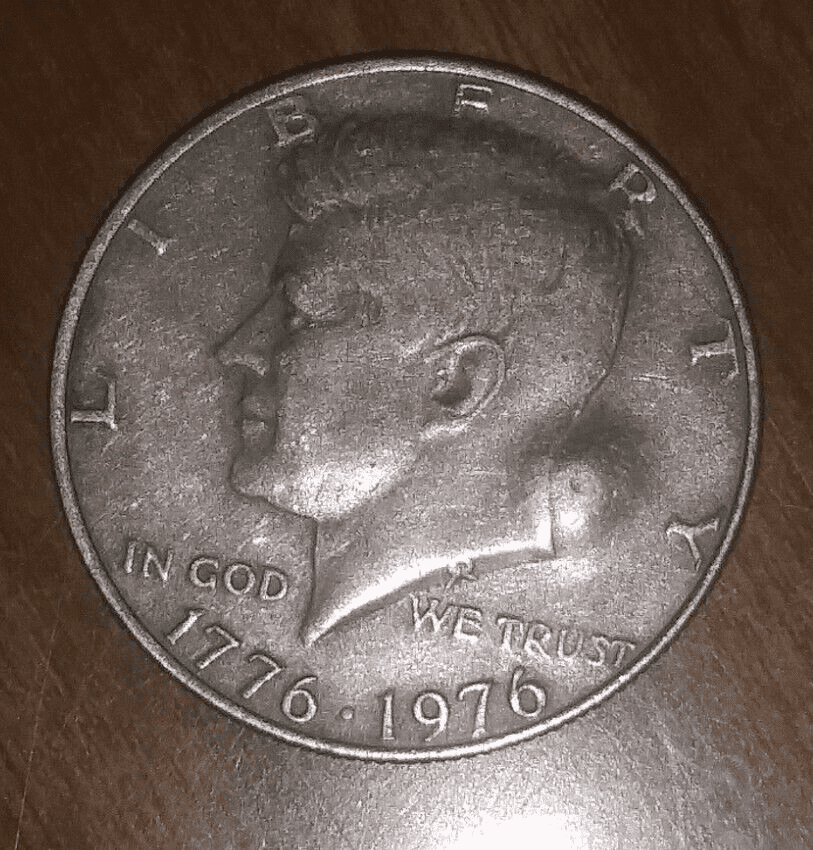 The 1976 No Mint Mark Kennedy Half Dollar was produced in the Philadelphia Mint. A coin like this in the mint state can be sold for up to $2.5 or more.

As a special and limited edition, the U.S. Mint produced a 1976-S 50-cent silver coin. A coin like this in circulated condition can be sold at $3.25 to $3.65. However, more impressive and appealing silver half-dollar coins can be sold at $220 or more.

No US coin has been free of errors and surely, the 1976 half dollar is not exempted. Throughout its production, there are some known errors. There are many examples of 1976 half-dollar errors, but here are three of them: 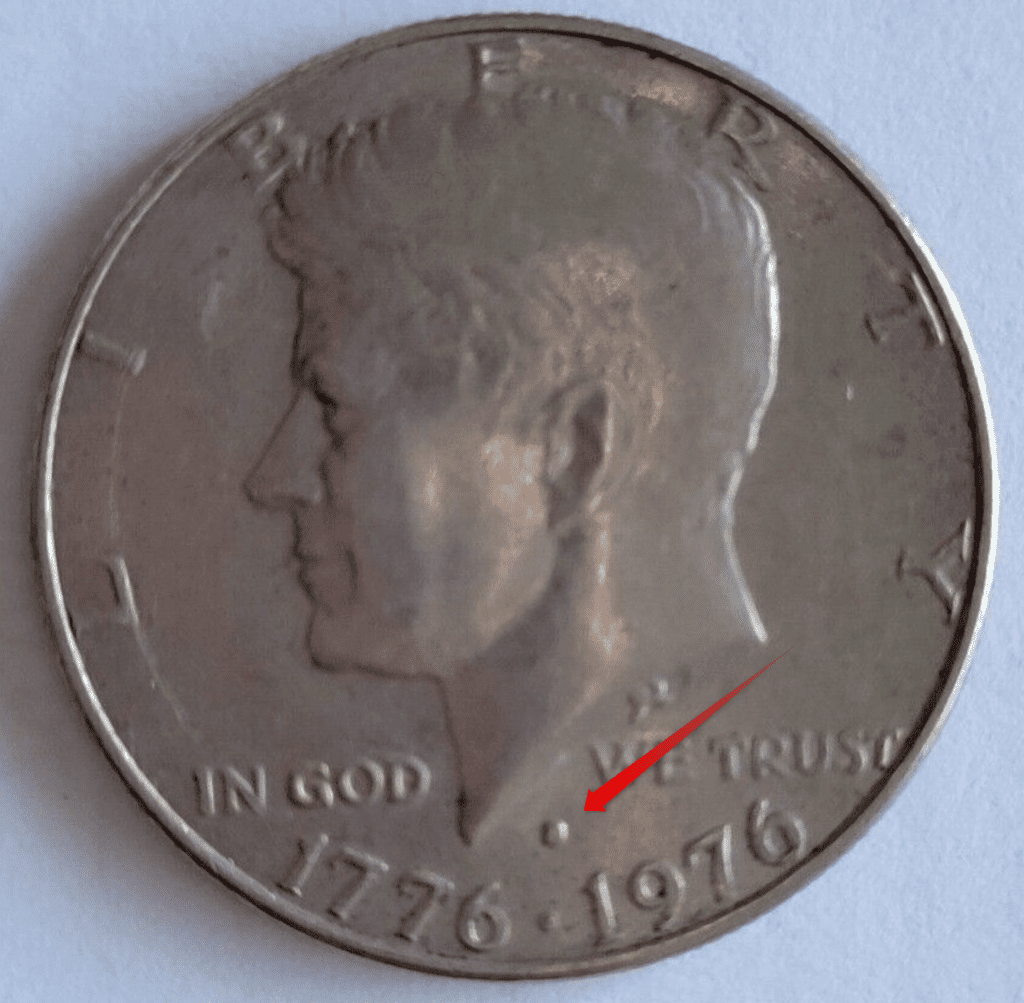 The mint mark isn’t as pronounced as it should be. 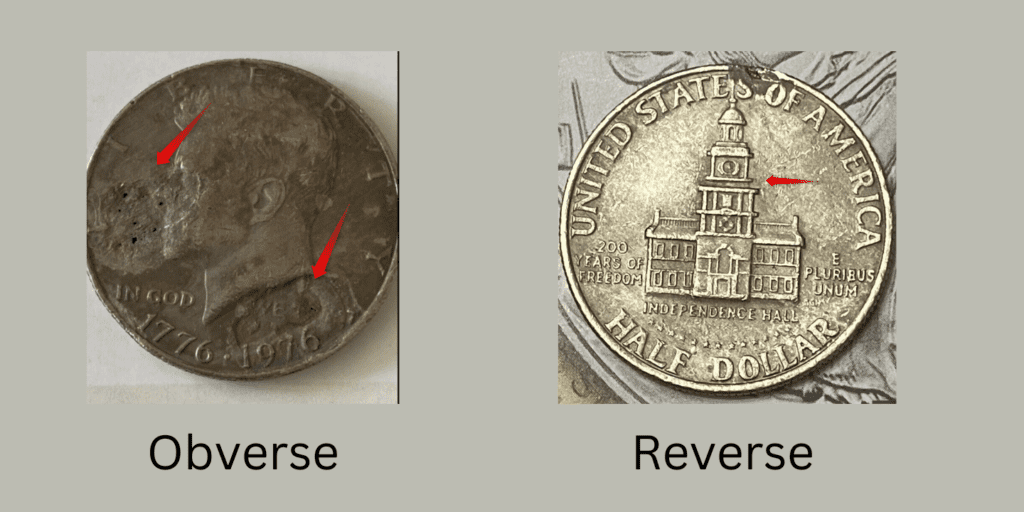 This coin has a lot of errors in it. The planchet is damaged. The die cracked in Kennedy’s nap. The roof seems to be floating under the clock. 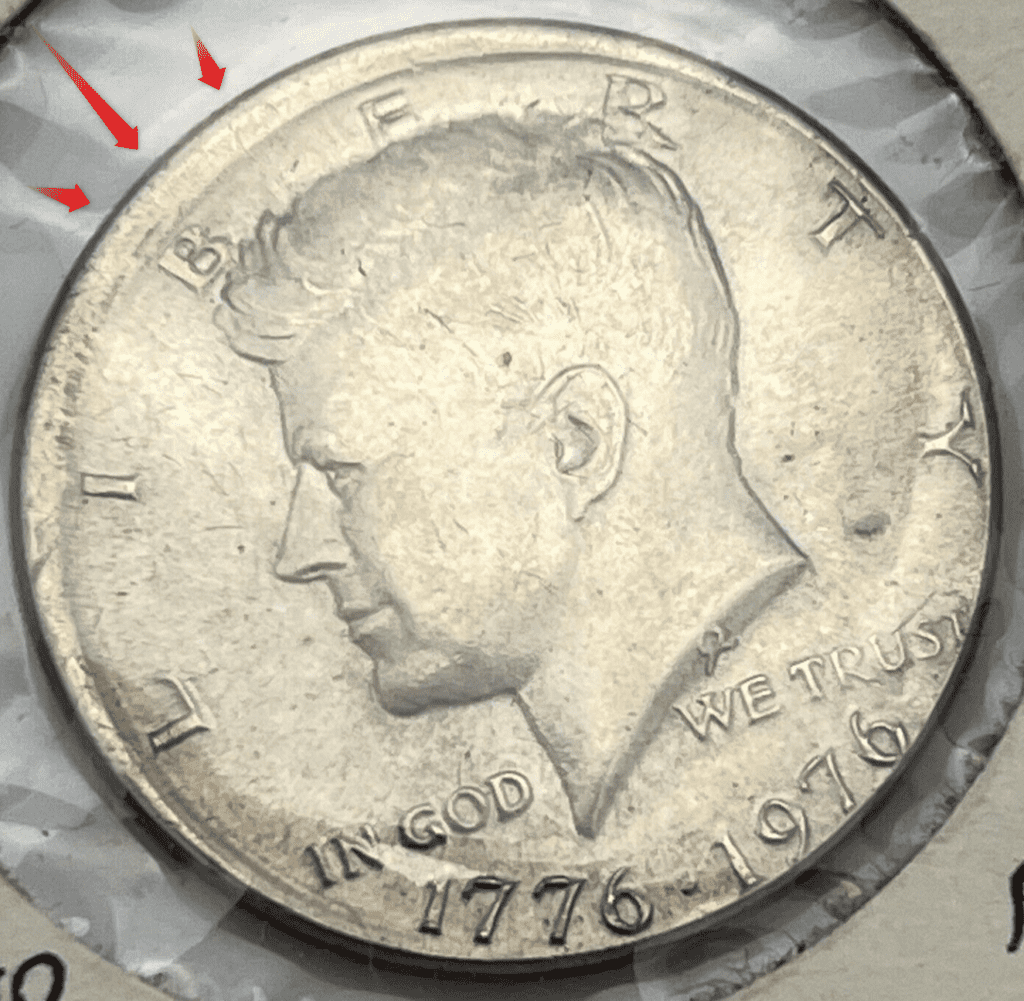 The planchet wasn’t properly placed. Thus, when it was struck, the print was off the center.

How Much Is A 1976 Kennedy Half Dollar Worth Today?

To give you an idea, here’s a table to get a quick look at the value of 1976 Kennedy half dollar:

Please note that the price listed is just an indication. It can be higher depending on the condition of the coin.

Moreover, 1976 half-dollar coins with errors can be more expensive because of their rare and unique features.

The coin grading system was created to serve as a guide to determining the value of a coin. There are different grades and these are some of them:

Where To Buy 1976 Kennedy Half Dollar?

You can buy the 1976 Kennedy Half Dollar in antique stores and coin shops. Aside from that, these half-dollar coins can now easily be found on the Internet. Websites like Amazon and eBay have a lot of these coins.

You can also join the coin collectors club to meet people who are interested in collecting coins. They may point you in the right direction where you can get the best deals.

If you’re trying to determine the right coin for you, always check for certifications that would prove that the coin was properly assessed. Moreover, if you’re looking for silver half-dollar coins, you can check the reeds of the coin. It should be solid silver.

Where is the mint mark on the 1976 Kennedy half dollar?

The mint mark on the 1976 Kennedy half dollar is found on the cut-off line of Kennedy’s neck. You can find the mint mark between the truncation of the “IN GOD” and “WE TRUST” letters. Mint marks can be a “D” for Denver and an “S” for San Francisco. No mint mark for coins minted in Philadelphia.

There are different types of errors that have been noticed. Some errors include blank planchet, double die, broad strike, weak strike, broken die, and off-center strike, to name a few.

What makes the 1976 half dollar so valuable?

The 1976 half dollar dramatically increases its value if it is rare and unique. Moreover, it has special features that make it more appealing and desirable. Some 1976 half-dollar coins were sold for as much as $200.

What is the mark on Kennedy’s neck on the half dollar?

The mark on Kennedy’s neck can either be the engraver’s initials or the mint mark. On Kennedy’s neck, the initial is written as a stylized monogram formed from the “GR” initials, which stands for Gilroy Roberts.

The other mark found on Kennedy’s neck is the mint mark, which is located between the “IN GOD” and  “WE TRUST” inscriptions. Mint marks can be D or S. It can also be absent.