What Is A 1976 Washington Quarter Made Of?

The 1976 Washington quarter is a copper-nickel-clad coin that is composed of 75% copper and 25% nickel. It has a core of pure copper and is covered by a mixture of copper and nickel.

Although the standard Washington quarter in 1976 was made of copper and nickel, there were special editions of the quarter that the U.S. Mint also made. There were also the 1776-1976 uncirculated, proof silver clad quarters with 40% silver.

Please note that the 1976 Washington quarter was made in 1975 and 1976 bear two dates, which are 1776-1976. The reason is that 1976 marked the 200th birth of the United States. Thus, the U.S. decided to create commemorative quarter coins along with the dollar and half-dollar coins.

The 1976 quarter essentially has the same obverse. Only the reverse was temporarily changed in commemoration of the 200th anniversary of the United States Declaration of Independence. 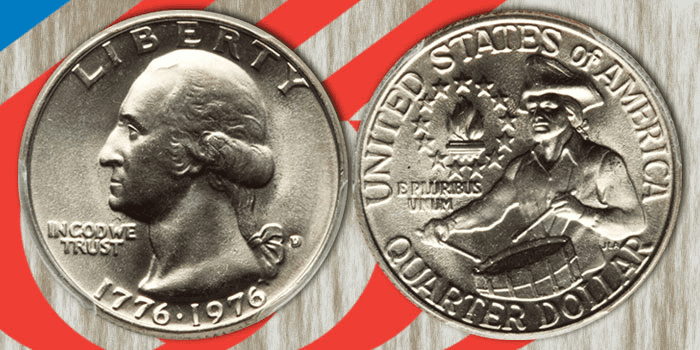 The obverse featured the left profile of George Washington. Inscriptions include the following:

Originally, the reverse side of the quarter is the United States eagle. For the years 1975 and 1976, the eagle was replaced by the colonial drummer facing left. Aside from that, you’ll find the victory torch encircled by 13 stars on the left side of the drummer.

Inscriptions on the reverse include the following:

To decide what design to add to the reverse of the commemorative quarter coin, the U.S. Mint held a national competition, which was open to all US sculptors. Jack Ahr won the competition with his colonial drummer. The 1776-1976 quarter was later best known as the drummer boy quarters.

How To Differentiate Between Clad And Silver 1976 Quarters?

After the production was over, there were about 11 million silver quarters and 4 million silver proof quarters made in the U.S. As impressive as these numbers are, there are way more copper-nickel 1976 quarters.

So, you might wonder, how can I know if my 1976 quarter is made of silver or not?

The first thing you should do is check the reed or edge of the coin. If you see a solid whitish or silvery color, then what you have in your hand is most likely a silver coin. Contrast that to a copper-nickel clad quarter that has a thin line of reddish copper mixed with whitish nickel.

Another tip is to check the weight. Silver quarters with 6.25 grams of weight are heavier than copper-nickel quarters, which only have 5.7 grams.

Moreover, if you have an old coin, you’ll notice that silver quarters tarnish over time. This is not the case with copper-nickel quarters, which will be covered with copper tint instead.

You can also do a drop test. Try to drop your coin and listen to the sound it makes. Copper-nickel quarters have a dull thud while silver coins make a higher pitched sound.

When in doubt, it doesn’t hurt to consult a qualified coin dealer. They can confirm to you whether you have a silver or non-silver 1976 quarter.

The 1976 quarters or 1776-1976 quarters come with various designs. Mostly, the difference has to do with their mint mark. There are also quarters made with errors, which gave rise to a different variety.

To get familiar with these varieties, take a look at the list below:

1976 Quarter With No Mint Mark 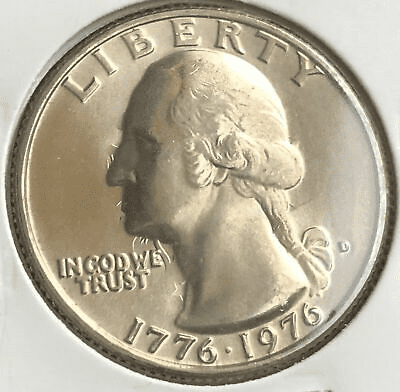 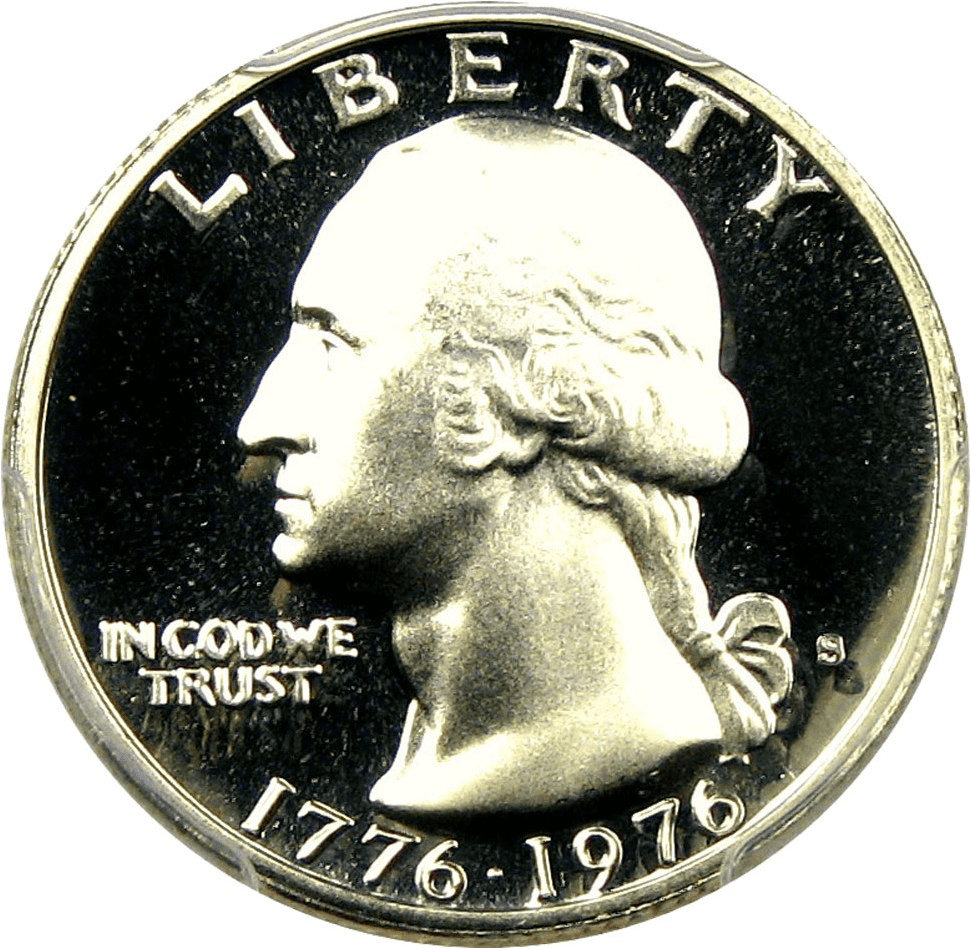 The 1976 S Quarter Proof has a selling price of $.25 to $5.50 or more if it has unique features. The San Francisco Mint produced 7,059,099 of these coins. Since these are proof coins, you’ll see them with a better visual appeal, more popped-out details, and a shiny look. 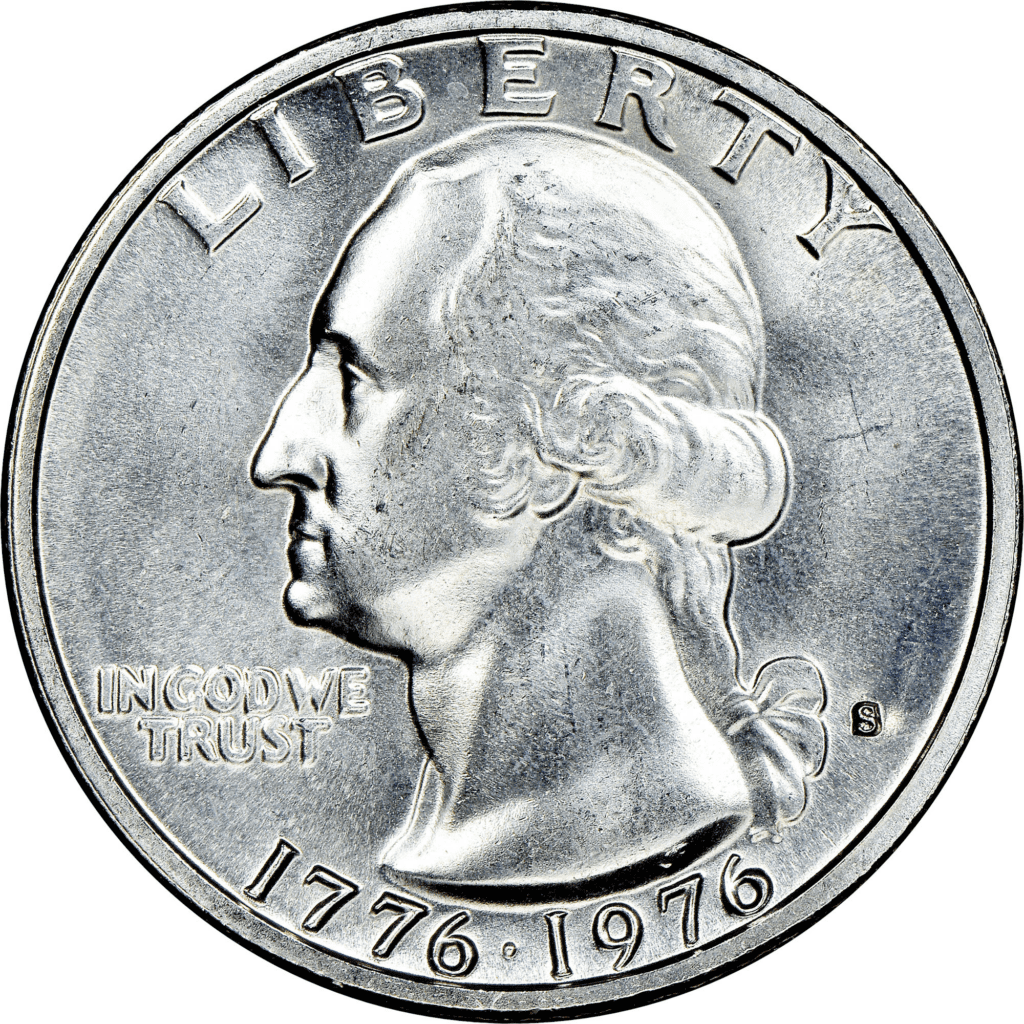 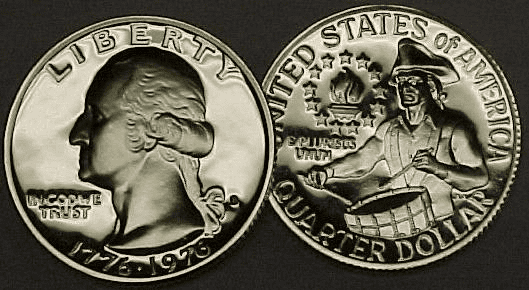 The 1976 S Quarter Silver Proof quarter has a selling price of $.025 to $5.95 or more if it has unique and impressive features. The San Francisco Mint produced 4,000,000 of these coins. Proof coins are usually not part of the circulation. They are sold to coin collectors.

No minting process is perfectly done. With millions of coins produced, it is inevitable that a few of the coins would not properly be struck or minted. Thus, the 1776-1976 quarter is not an exemption.

Here are some known 1976 quarter errors you might find interesting:

The value of your 1776-1976 quarter coin can dramatically increase if it is in good condition and has rare or impressive attributes. Moreover, once your coin is officially graded, you can demand a higher price as suggested by the grade you received.

Just to give you an example, here’s a table to help you get an overview of the price of a 1976 quarter.

The Internet is a great place to buy or sell 1976 quarters. Websites such as Facebook marketplace, Amazon, and eBay are the most popular go-to places online. However, there are also other websites that specialize in selling and buying U.S. coins. A simple Google search should reveal a few of these top websites.

Alternatively, you can go to physical stores where you can buy or sell coins. Locations such as coin shops, coin exchanges, and coin collectors hubs should be good places to start your search.

With over 1.7 billion of 1776-1976 quarters made, you should easily find them. They are not rare coins and you can even find 1976 coins in circulation.

What is the melt value of a 1976 bicentennial quarter?

What does it mean when there is no mint mark on a coin?

If there’s no mint mark, the coin is most likely struck in the Philadelphia Mint.

Where is the mint mark located on a 1976 quarter?

The mint mark is found on the right side of George Washington’s image, just below his ponytail.

How much is a 1976 bicentennial quarter?

The 1976 bicentennial quarter is worth $0.25. Quarters in the mint state can be sold for about $5. Price can easily go up if you have a quarter coin with rare attributes. One example is the Denver Washington bicentennial quarter in MS68 status. Some sellers have earned $3,220 to $6,463 by selling these coins.