What Is A 1976 Jefferson Nickel Made Of?

The 1976 Jefferson nickel’s obverse features the bust of Thomas Jefferson facing left. The inscriptions include the following:

On the reverse side, the prominent image is the Monticello mansion, the home of Jefferson. Various inscriptions can be seen, which include the following:

The 1976 Jefferson nickel comes in different varieties. Most of them differ in their mint mark. However, some nickels differ because of one or more errors that it received.

To get familiar with these varieties, take a look at them below: 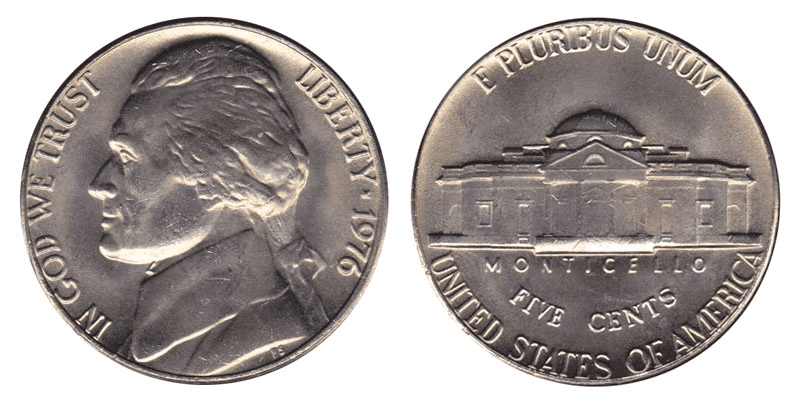 The 1976 P Nickel (No Mint Mark) was minted in Philadelphia. There are more than 360 million of these nickels made. You can sell this nickel for as much as $1.25 depending on its condition. 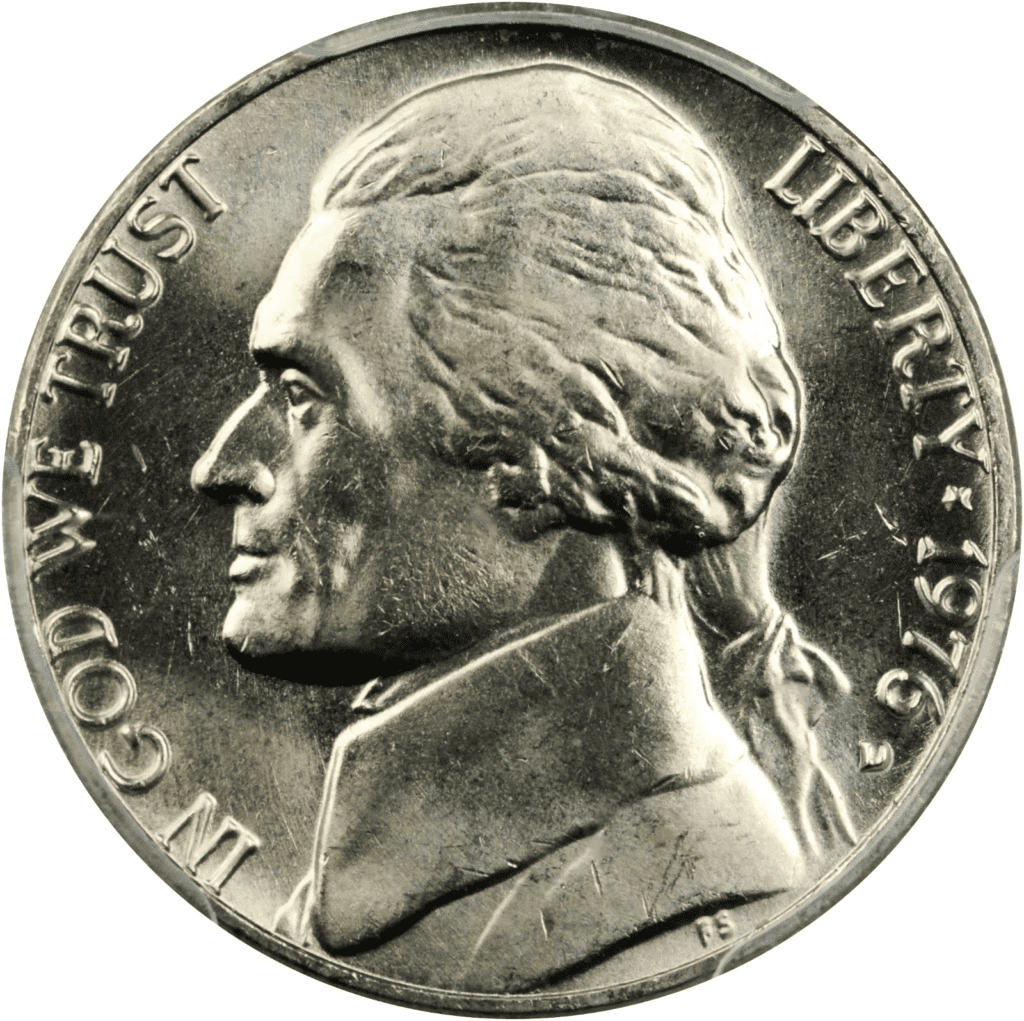 The 1976 D Nickel was minted in Denver. There are more than 560 million of these nickels made. You can sell this nickel for as much as $18.00 depending on its condition. 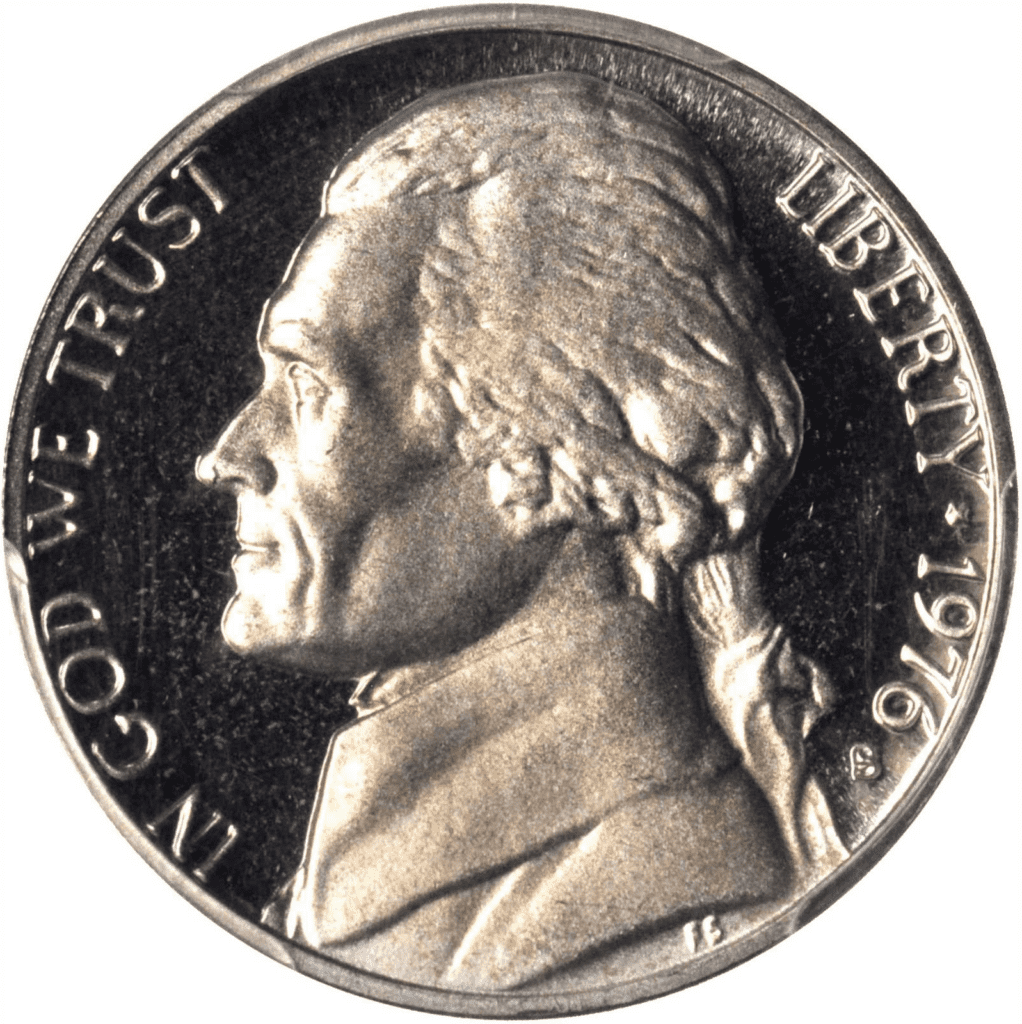 The 1976 S Nickel was minted in San Francisco. There are more than 4 million of these nickels made. You can sell this nickel for as much as $3.50 depending on its condition.

The 1976 S Nickel was minted in San Francisco. There are more than 4 million of these nickels made. You can sell this nickel for as much as $3.50 depending on its condition.

With more than 900 million 1976 nickels produced, it is not surprising to note that some of these nickels were made with one or more errors.

Like other coins, some of the common errors would include off-center strike, broad strike, double die strike, folded planchet, blank planchet, and broken die, just to name a few.

How Much Is A 1976 Jefferson Nickel Worth Today?

Standard, common, and ordinary 1976 Jefferson nickels are only worth their face value, which is $0.05. Its melt value is about $0.56 However, if you have uncirculated, unique, and attractive nickels, you may be able to sell them for a higher price.

Here’s a table to give you an idea of how much 1976 nickel coins are:

Please note that prices can dramatically increase if your nickel has a rare quality, impressive eye appeal, and special features.

The coin grading system is an important concept that every coin collector should understand.

When it comes to grading, a coin can dramatically increase its grade if it has the full steps found in the Monticello mansion on the reverse side of the coin.

If you look closely and you can find at least five full steps visible at Monticello’s base, then your coin would be given a “Full Steps” grading designation. Moreover, if you have a “Full Steps” coin, it means that the coin is fully struck.

Here’s a video that you should watch to better understand how to identify a full-step nickel.

When talking about coin grading, you might encounter the term “1976 S nickel rpm.” RPM means Repunched Mint Mark. A coin becomes an RPM variety when the mint mark is struck multiple times. So, a 1976 S nickel RPM refers to a nickel minted in San Francisco that has its mint mark struck more than once.

Here’s an example of a D mint mark struck twice: 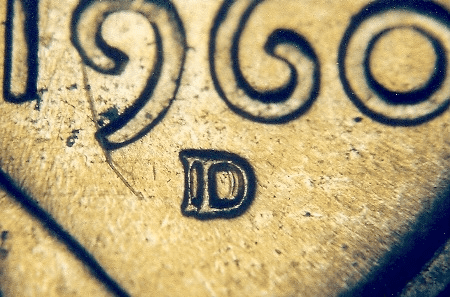 Since 1976 S nickel RPM can be rare, owners of this coin can sell it for a higher price.

Where To Buy Or Sell 1976 Jefferson Nickels?

You can buy or sell 1976 Jefferson nickels online. If you want to instantly find Jefferson nickels, you can simply go to the Internet. With just a few clicks of a button, you should be able to buy new nickels or sell your coins. For specific websites, you can try Amazon, eBay, and USA Coin Book.

Aside from the Internet, you can go to your local coin shops, coin exchanges, antique stores, and collector’s places. Try joining coin clubs. Members can also help you know where you can buy or sell 1976 Jefferson nickels.

Where is the mint mark on a 1976 Jefferson nickel?

What nickels have the most silver?

The war nickels are considered to have the most silver content among all varieties of nickels. They are called war nickels because they were produced from mid-1942 to 1945. Nickels produced at this time are 35% silver, 9% manganese, and 56% copper.

What is the rarest nickel?

What years are the most valuable Jefferson nickels?