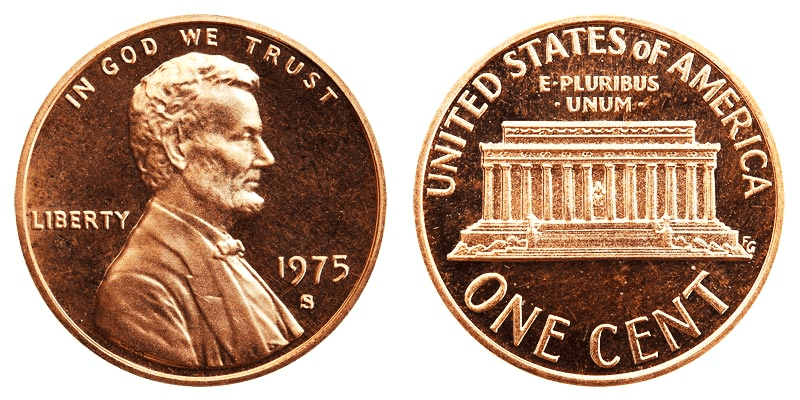 The 1975 one-cent coin is often called the “penny.” It features the right-facing bust of Abraham Lincoln on the obverse. The top part of the coin reads, “IN GOD WE TRUST.”

On the right side is the 1975 inscription and on the left side is the word, “LIBERTY.” If present, you’ll find the mint mark below the year.

On the reverse, you’ll find the image of the Lincoln Memorial, front view. You then see the various inscriptions that include the following:

The first US penny was first produced in 1787. It has gone through different design changes. Some of the designs it featured in the past include the flowing hair chain, liberty cap, draped bust, and flying eagle.

The Lincoln design was used in 1909, which coincided with the president’s 100th birthday. This has replaced the Indian head cent. However, the Lincoln Memorial on the reverse was later adopted in 1959 to replace the wheat-stalks image.

Did you know that the penny is the most produced coin in the United States?

Not only that, but the Lincoln penny was the first time that the US used a portrait as part of a design. Prior to 1909, it was always the mythical Liberty that was featured on the coin. This led to other coins being changed to bear portraits of other people.

The 1975 Lincoln penny comes in various designs. However, the main differential character would be their mint mark. There are also some pennies that have errors, giving rise to other varieties.

To give you an idea, here are some of the most well-known 1975 pennies. 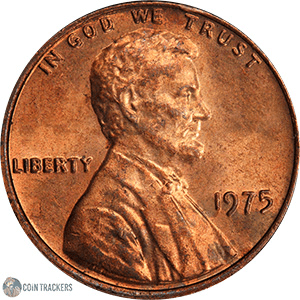 The Lincoln penny with no mark was struck in Philadelphia. There were over five billion of these pennies that were struck. With a face value of $0.01, you might be able to sell one of these for as much as $9, depending on your coin’s status. 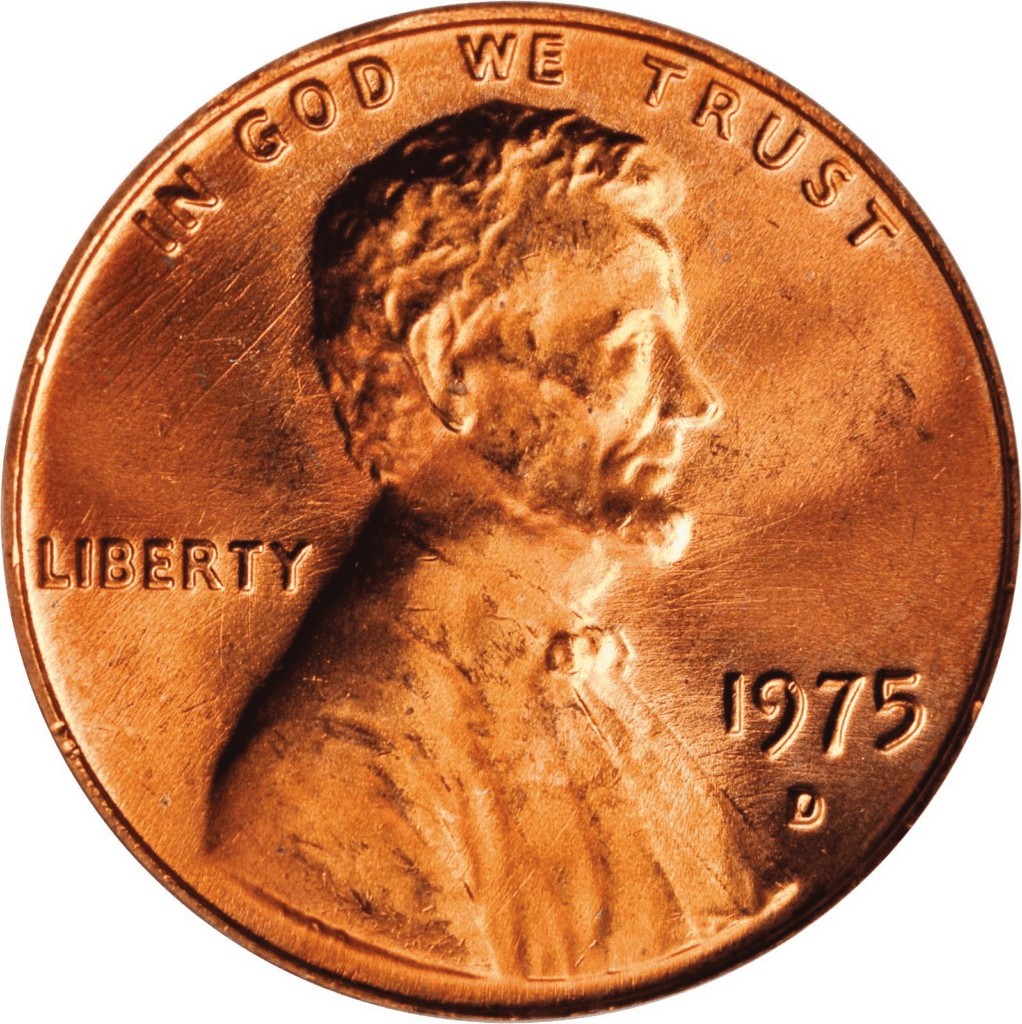 The 1975 D penny is seen to be more valuable than the other standard varieties. Collectors would value those coins with mint state certifications.

The mint mark is “D”, which indicates it was made in Denver. More than 4.5 billion of these coins were struck. 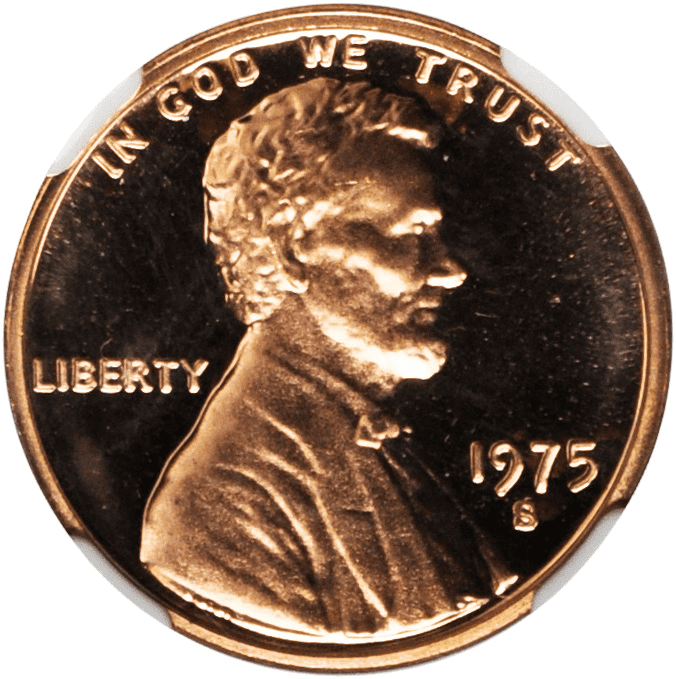 One 1975 S penny is usually sold for its face value, which is 1 cent. However, certified mint state S pennies can be sold for $5.00.

The S mint mark represents San Francisco and almost 3 million of the S variety were struck.

There were a few known errors that happened during the minting of the Lincoln penny. With billions of pennies produced, it is expected that some were not minted properly.

Here are some of the known errors you should know: 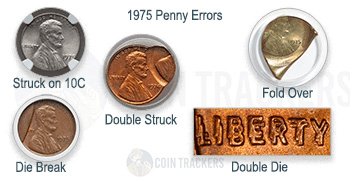 The US Mint produced almost 10 billion of 1975 pennies. Thus, the 1975 Lincoln pennies are not that rare. Here’s a quick look at the quantities:

As this might be the case, there are still rare 1975 pennies and they exist primarily because of minting errors.

The minting centers made pennies predominantly with copper. There’s one “silver” penny, but actually just aluminum. No gold pennies are known to have been produced. The red pennies are a result of discoloration.

The ordinary 1975 penny is valued the same as its face and melt value which is $0.01. The uncirculated, proof pennies are more valuable than the circulated pennies. You can earn up to $30 for the uncirculated ones.

However, if you have the rare 1975 pennies, then you can earn a lot from them.

The grading system is useful in determining the value of your pennies. If you receive the MS 65 gem uncirculated grade, then that means your coin has a good eye appeal plus strong luster. There are only a few barely noticeable contact marks.

Other pennies may also be graded as PR 65 proof. This means that the coin has no flaws although a few acceptable blemishes are present. Since it’s proof, the coin’s elements are more detailed.

With the Internet, selling and buying 1975 pennies are made easier. Of course, be sure to do a background check. Whether you are selling or buying precious pennies, you can’t take away the fact that there are plenty of scams online. So, be very careful.

Aside from online platforms, you can also try coin shops, collectors’ hubs, antique shops, and other brick-and-mortar stores.

The 175 Canadian penny is about $0.04 CAD. it can go up depending on the quality, rarity, supply, demand, finish, and other factors.

The 1975 pennies with higher prices are the ones that didn’t enter circulation. The pennies with errors have the highest value because of their rarity. Proof pennies are also valued more than standard coins.

How much is a 1975 bicentennial penny?

The 1975 bicentennial penny is worth around $2 to $4. The price can increase depending on the penny’s condition and rarity.