What Is The 1976 Eisenhower Dollar Made Of?

Since the 1976 series coincides with the 200th birth of the United States of America, a unique commemorative design was used. Thus, you will not find a 1976 Eisenhower dollar. Instead, you’ll find a dollar coin with two dates, 1776-1976. The dollar coins struck in 1975 and 1976 bear these two dates.

The 1776-1976 Eisenhower dollar has the image of Dwight Eisenhower, the 34th US president, facing to the left side. On the obverse side, you’ll find the following inscriptions: 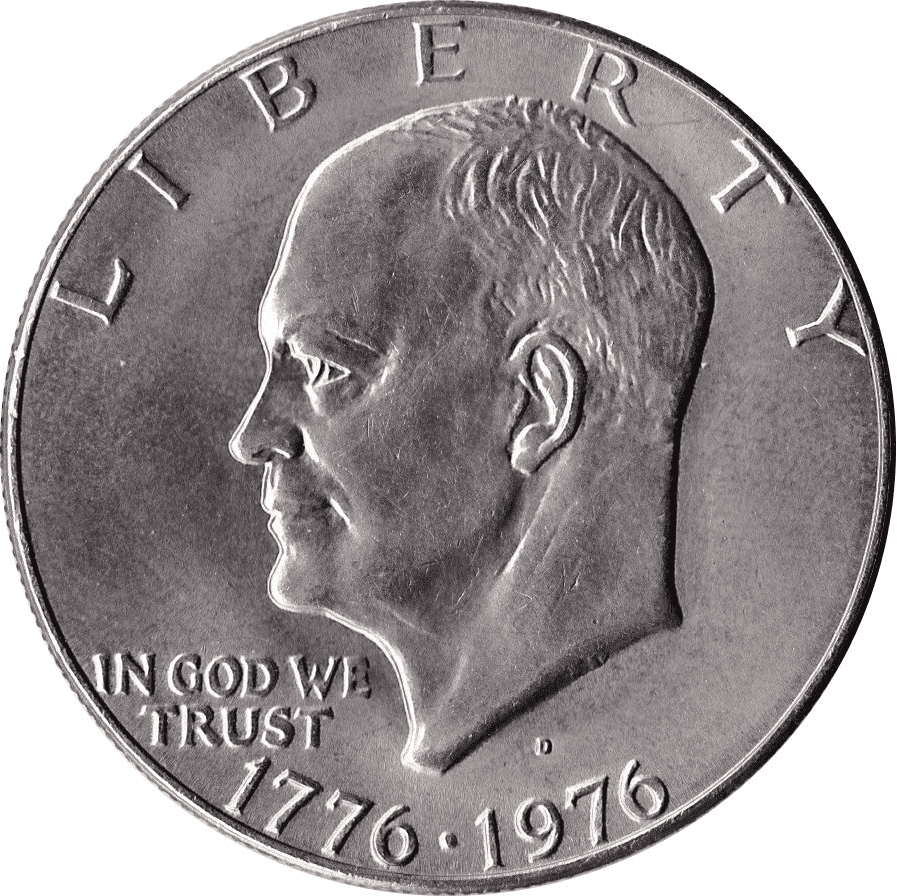 The usual Eisenhower dollar coin has the eagle on its reverse side. However, you’ll find the Liberty bell in front of the Moon for the commemorative coin version. The Liberty bell symbolizes freedom while the Moon, the Apollo 11 insignia, reminds people about the 1969 moon landing.

The inscriptions included on the reverse side are the following: 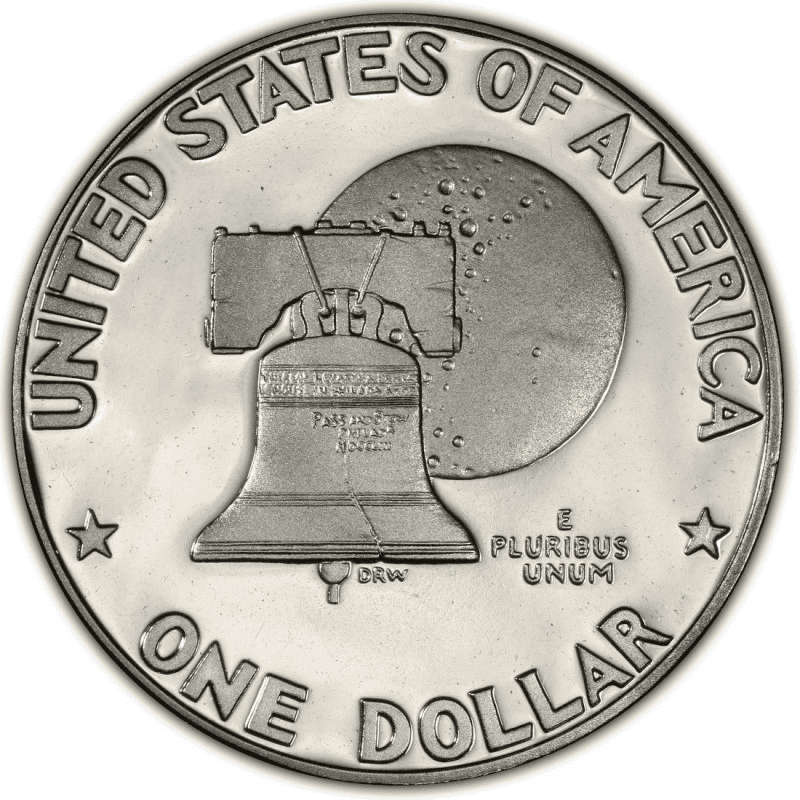 The United States Bicentennial coinage included not just the dollar, but also the half dollar and quarter. The bicentennial coins faced opposition when it was first conceptualized.

However, this all changed in 1971 when some members of Congress wanted to create commemorative coins for the 200th anniversary of the founding of the United States. Mary Brooks, the Mint director at that time, eventually supported the move. Only the reverse side of the dollar, half-dollar, and quarter coins were changed.

The reverse design of the dollar was determined through a competition open to the public. Dennis R. Williams, a 22-year-old art student at that time, won the competition. Once the design was approved, the 1776-1976 dollar coin was set for the mintage process.

The 1976 Eisenhower dollar went through different design changes in just a short time. Thus, there are different varieties and even rarities known.

Here are some of the varieties you should know: 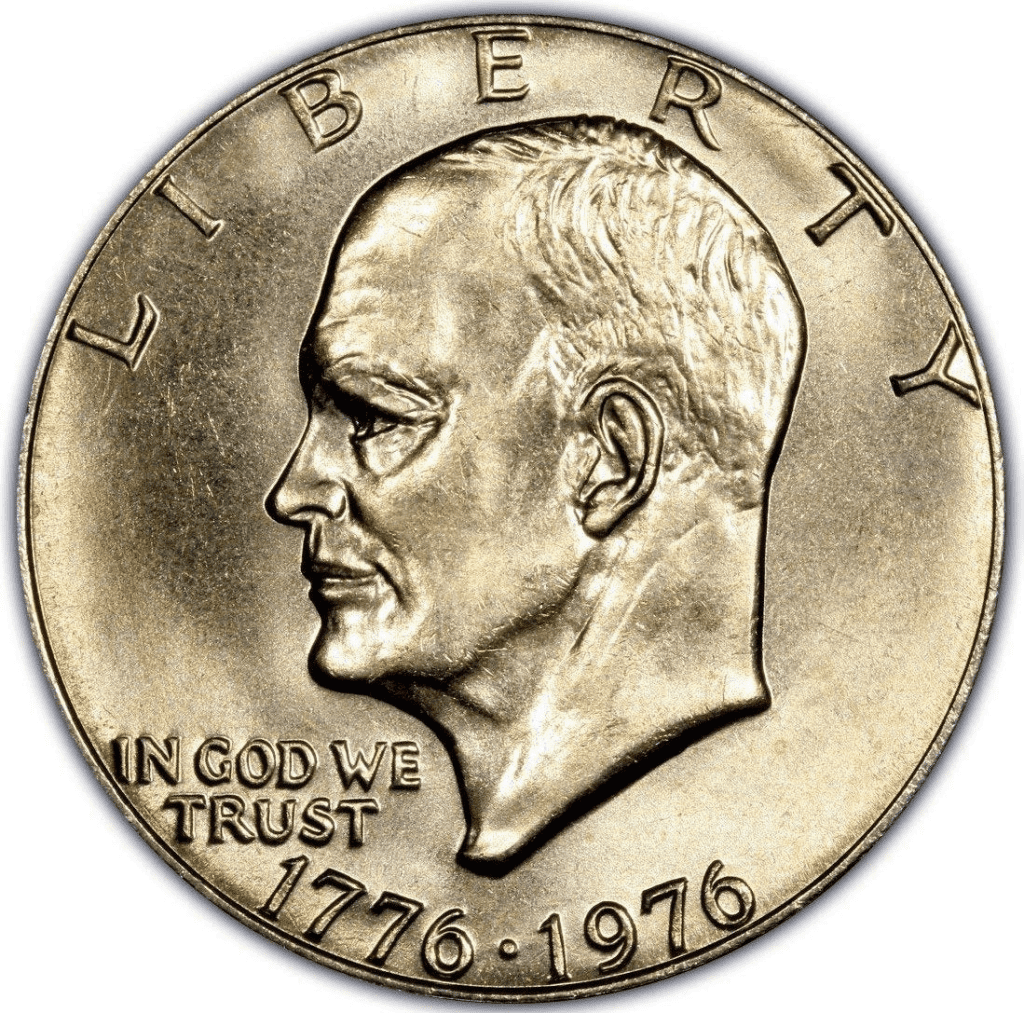 The mint mark is missing, but coins with no mint mark are understood to have been struck in Philadelphia. 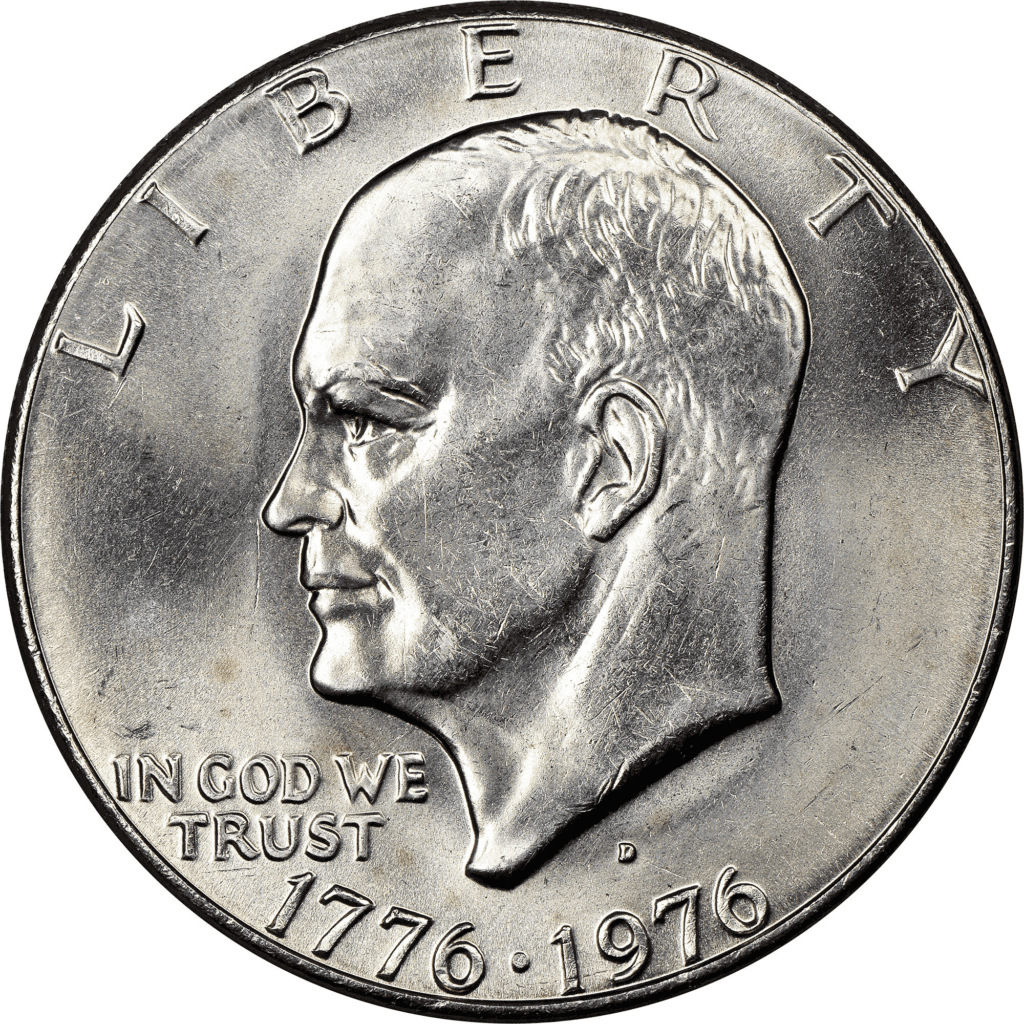 The “D” mint mark indicates that the coin was struck in Denver. 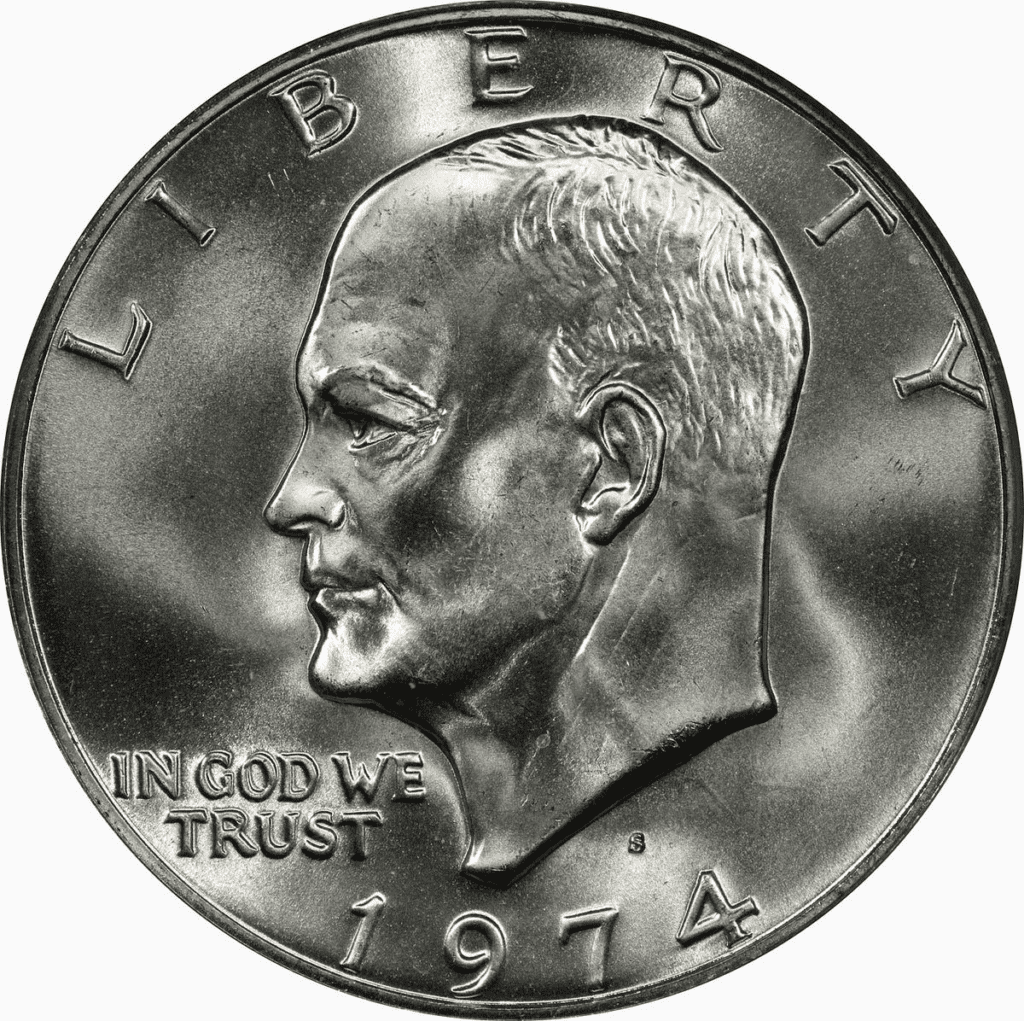 The “S” mint mark indicates that the coin is struck in San Francisco.

You might wonder if there’s a 40% Silver 1976 dollar coin. Yes, there is. However, they were not made for circulation but rather created to be given or sold to selected individuals.

It is worth noting that all the standard varieties of the 1976 dollar coins have two reverse versions. These are the following:

In 1975, the type 1 version of the reverse side of the coin was struck. However, during its production, the US Mint noticed that there was a problem in the process. The die was designed to strike silver and since copper-nickel is used, the die was striking improperly.

As a result, the Mint called for the production to stop until a new die is created. That was when the Type II reverse side of the dollar coin was made.

The main difference is the letters of “UNITED STATES OF AMERICA” were changed into thicker and bolder letterings. 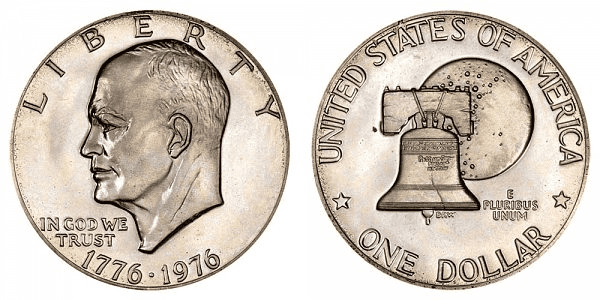 The unique 1976 no mint mark (No “S”) type 2 with a silver surface is probably the rarest variety of the Eisenhower dollar coin. In fact, there’s only one of its kind known to exist. The image above is what the rare 1-dollar coin looks like.

So, how did the unique silver 1976 dollar coin come about? No one can actually tell for sure. There are a few theories circulating around, but the facts haven’t fully been established.

The US Mint believed that the one-of-a-kind silver one-dollar coin was created in Philadelphia. It is intended to serve as a trial version that would be presented to the management. For some reason, the coin ends up in circulation.

Perhaps, it was presented to one of the members of Congress. Mistakenly thinking that the coin was just an ordinary coin, that person then used it to pay for services or products.

The special coin was then later discovered in a department store in Washington DC, a store named Woodward and Lathrop.

Today, Mitchell Spivack owns the special 1-dollar coin. He is a modern coin expert who sees the silver 1976 Eisenhower coin as the rarest coin in US history. What makes this coin extra special is it is even a coin used to commemorate the 200th anniversary of US Independence.

For the 1976 dollar coin, there are a few errors that happened during the production. Some of these errors are known as the following:

How Much Is A 1976 Eisenhower Dollar Worth Today?

The more expensive varieties would be the 1 dollar coins with errors. Just to give you an idea, a 1976 Eisenhower dollar with off-center strikes can be sold for $550. The coin that received multiple strikes can even be sold for $1,000. Some of the most expensive 1776-1976 silver dollars are worth as much as $30,000.

Where To Buy 1976 Eisenhower Dollar?

There were over 220 million 1776-1976 bicentennial 1-dollar coins struck and these were released into circulation in October 1975. More Eisenhower dollar coins were struck in the following years until it was discontinued in 1978.

So, there are a lot of 1976 dollar coins and you can easily find them. If you’re planning to buy one, the quickest way to find them would be the Internet. eBay and Amazon are among the most known places to buy your next coin. Facebook also has a special place called Facebook Marketplace where you can also look for the 1976 Eisenhower dollar.

Aside from the Internet, you can also visit coin shops, antique shops, and coin collectors’ hubs. You can also ask around. If possible, join clubs of coin collectors and you should be able to widen your network and find the right coin for you.

If you have a 1976 Eisenhower dollar coin or you are looking for a good coin to buy, look for the Eisenhower silver dollars. However, how can you know if your coin contains silver?

First, you need to check the date. The Eisenhower silver dollars were made from 1971-1976.

Next, check the mint mark. Look for the coins made in San Francisco. It should have a mint mark of “S.”

Finally, look at the edge of the coin. If you see that you have solid silver stripes, then that coin is more likely to be made of 40% silver.

How to know if a 1976 Eisenhower dollar is silver?

How much silver is in a 1976 Bicentennial Eisenhower dollar?

The silver 1976 Bicentennial Eisenhower dollar has 40% silver content and the rest is copper or nickel.

The 1776-1976 Eisenhower dollar is rare if it is made of silver, uncirculated, and proof.