On the obverse, the 1975 Dime features the image of Franklin Delano Roosevelt. The bust is facing the left with the word “LIBERTY” in front of him. Under Roosevelt’s chin, you’ll find the inscription, “IN GOD WE TRUST.”

Under the neck of Roosevelt is the year 1975 and between the year and his neck is the mint mark, which can be “D,” “S,” or no mint mark at all. 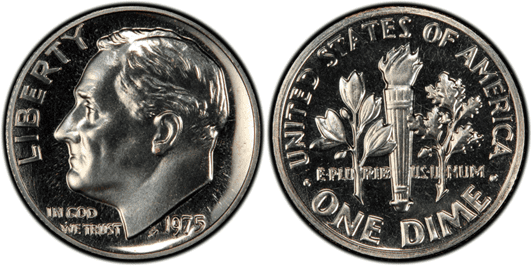 The US Motto, “E Pluribus Unum” stretches from left to right. At the bottom, the value “ONE DIME” is added. On top is the “UNITED STATES OF AMERICA.”

One interesting element you’ll also find is the “JS” initials at the cutoff of the bust and near the year, “1975.” JS stands for John Sinnock. He was the Chief Engraver at the time of the dime’s creation in 1945. Sinnock’s designs were repeatedly rejected until he came up with the final one.

The first Roosevelt dime went into circulation in 1945. Since its release, the Roosevelt dime was mass-produced in huge numbers. At first, the dime was made of silver. However, in 1965, the coin transitioned to base metal. The design of Sinnock remained essentially unchanged until this day.

The 1975 Roosevelt dime has at least three official varieties. The main difference is their mint mark, which indicates where the coin was made.

The varieties include the following:

Please note that Philadelphia Mint traditionally doesn’t add a mint mark on the coins they make. Thus, if you find a coin with no mint mark, although it has no “P,” it is understood to have been made in Philadelphia.

The “D” stands for Denver and “S for San Francisco.

Here’s a quick look at the varieties: 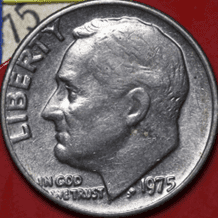 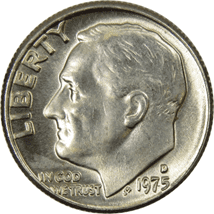 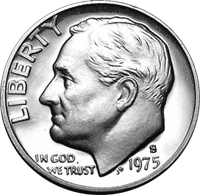 Like other coins, there’s always a chance that an error can occur from the planchet to the die, from the strike to the release.

For the 1975 dime, there’s not much error reported. However, errors can sometimes be a blessing in disguise. There are coins with errors that can be sold for more than their face value. Because how the error made the coin rare, its value increases.

There was one type of error that produced a super rare 1975 dime. This was the genuine 1975-S Roosevelt coin Proof with No S mint mark dime. 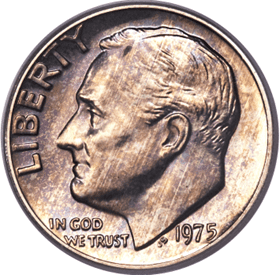 What makes a 1975 dime rare is its uniqueness. As you may imagine, millions if not billions of coins are made each year. The majority of them look the same and if something is different, that coin is rare.

Time can also make a dime rare. 1975 is already decades ago. You can’t create any coin the same as what was made in 1975. So, that makes a coin rare nowadays.

Finally, the number produced makes a dime rare. If only a few of a certain variety existed, then that coin is rare.

The rarest 1975 dime is the Proof 1975-S Roosevelt, no S dime. As of the time of this writing, there are only two of these dimes that were authenticated by the American Numismatic Association Certification Service.

Now, if what you just read interests you, you are probably asking, how do I know if a dime is the 1975 no-S rare coin?

This is an important question that should be answered. A lot of Roosevelt dimes are being sold online. The sellers claim that their dimes are rare and it is worth hundreds or thousands of dollars.

Because of the prevalent scam and fraud out there, it is best that you know what you’re getting. It is always wise to get as much information as possible.

So, the first thing you need to understand is the difference between proof coins and business strikes. Remember that the rare dime is a proof coin.

An authentic rare 1975 no-S dime should look more attractive because it is a proof coin. As a proof coin, it should have a shinier appearance. Moreover, the coin has this mirrored background that makes the bust and other elements pop out. There is also a degree of cameo or frost on the design elements that add a more dramatic effect.

Here’s a close-up look of the authentic 1974 no-S dime that is worth thousands of dollars: 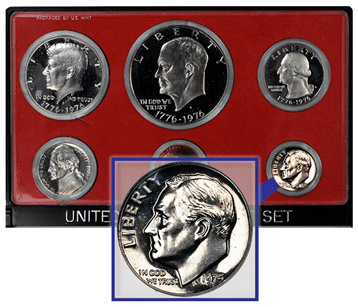 The United States Mint used a special process to ensure that a proof coin would receive maximum details on both sides of the coin.

Proof coins are usually not added to circulation and are specially made for collectors who pay a certain amount of money to own them.

On the other hand, business-struck coins are the standard and ordinary coins that go into circulation. These coins, while flashy, shiny, and lustrous when released, eventually lose their beauty as they are used in various transactions.

To give you an idea, here’s a side-by-side comparison of a proof coin. 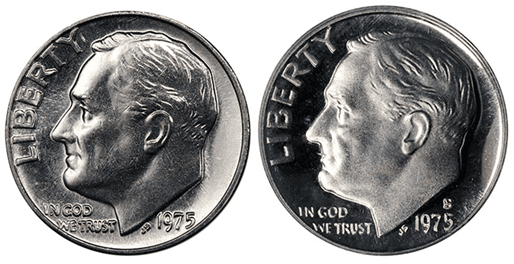 At first glance, you can easily see that the coin on the right side is shinier and has more details. This is the proof coin as opposed to the business-struck coin on the left side.

If you see your coin to be unusually beautiful and attractive, you need to bring it to the experts of authentication. Your coin would remain ordinary unless and until it is checked.

Two of the most popular coin graders are Numismatic Guaranty Corporation (NGC) in Florida and Professional Coin Grading Service (PCGS) in California.

Most believe that the super rare 1975 dime was produced when the mint mark on the die failed. Once the Mint inspectors discovered the error, they immediately stopped the minting process and corrected the problem. Most of the error dimes were never released while some probably have made it into circulation.

How Much Is A 1975 Roosevelt Dime Worth Today?

Most 1975 Roosevelt dimes are worth $0.10 to $7. Its melt value is around $0.10. Some can have a higher price depending on their rarity and condition.

The coin grading system works by assessing the appearance, preservation, and rarity of a coin. Sometimes, the origin of the coin could also affect its value.

Buying or selling 1975 dimes is now easier thanks to the World Wide Web. By doing a search on the Internet, you can quickly find people who may buy your coins or sell you coins.

Aside from the Internet, you can go to coin shops, antique stores, and coin collectors. They should be able to help you do business with your 1975 dimes.

How can you tell if a dime is a proof?

You can look at the general appearance of the dime. A proof coin is shinier and more beautiful in appearance. Even though it’s an old coin, you can still see how detailed its various elements are. Plus, proof coins are more likely to be in the hands of collectors and never circulated to the public.

The mint mark of a 1975 dime is found between the cutoff of Roosevelt’s bust and the year 1975.

What is the rarest dime?

One of the rarest dimes in the United States is the 1894-S Barber dime. This dime is so rare that two of them were sold for $1.3 million and $1.9 million a piece.