As a new coin collector, you might be surprised how difficult it is to find a 1975 quarter. You have searched far and wide. You went to antique shops, the Internet, and pocket changes. Yet, you still can’t find any 1975 quarters.

Then, someone told you, “You can’t find 1975 quarters no matter how hard you try.”

The 1975 quarters don’t exist because they weren’t produced by the United States Mint. Instead, the producers strike the Washington quarter with a dual date of 1776-1976.

The production of the 1776-1976 quarter coins started in July 1975. So, you might wonder, if they started in the middle of 1975 to produce commemorative coins, why didn’t they simply create 1975 quarter coins during the first half of the year?

That’s a good question that needs to be answered.

A quarter coin with a specific date would normally be struck for the whole year. So, from January to December, the US Mint produces the same quarter coin with the same inscribed date. This is done to make sure that there is plenty of the same coin that goes into circulation.

Now, what do you think would happen if a 1975 quarter coin is only produced for six months? This would lead to the 1975 quarter coin being rarer than other coins because its production period is only half a year.

As a result, the US Mint and other people have a legitimate concern that there will be perceived scarcity of the 1975 quarter coins, and many collectors would hoard this coin and eventually remove the entire 1975 quarter coins out of circulation.

Back in 1975, there was also a problem with the decreasing number of quarter coins. So, hoarding of the 1975 coins would worsen the problem.

The US Mint officials then ask Congress to amend the law and allow them to continue producing 1974 coins up until the Bicentennial coin production would commence in July 1975. 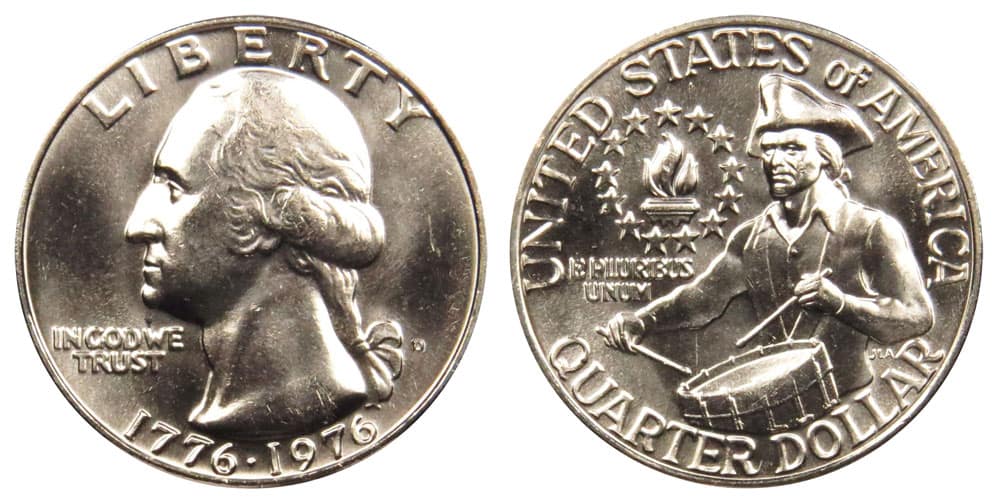 In 1973, Congress already approved the production of the United States Bicentennial coins. The approval gave way to the U.S. Mint to create coins that have the year 1776-1976. Thus, you will find not just quarters, but also half dollars and dollar coins with two dates.

There are different varieties of the 1776-1976 quarter coin based on their mint marks. These are the following:

There were almost 1.7 billion commemorative 1776-1976 quarter coins produced. Here’s a breakdown based on where they are minted:

Here’s a quick look at the specifications of the commemorative 1776-1976 quarter coin:

The obverse side of the commemorative quarter coin features the portrait of George Washington, which is facing to the left side. Here are the inscriptions you’ll find:

On the reverse side, you’ll find the Colonial patriot drummer, which is also facing left. There’s also the torch that represents victory. Around the torch include the thirteen stars with the US motto, “E PLURIBUS UNUM.”

You’ll also find the “UNITED STATES of AMERICA” arched atop the coin. The “QUARTER DOLLAR” is also inscribed below. You’ll also see the JLA initials, which means Jack L. Ahr, the engraver of the reverse side.

Where To Buy Or Sell 1975 Washington Quarter?

Coin shops and antique shops are the most popular types of stores in which customers can buy or sell coins. You can also participate in auctions, which feature sales of the finest and most valuable coins available.

You can also resort to online selling platforms if you want an alternative to specialized websites. These online marketplaces include Etsy, Amazon, eBay, and Facebook Marketplace. The Internet is by far the most convenient platform on which to purchase, sell, or trade a 1975 Washington quarter in this hyperconnected world. There are hundreds of websites online that specialized in buying and selling different types of coins.

Is a 1975 Canadian quarter made of silver?

No, the 1975 Canadian quarter isn’t made of silver. It is 99.9% nickel. Any quarter made from 1968 onwards is made of nickel or other metals. The Canadian Mint stopped producing silver quarter coins in 1968.

How many Bicentennial quarters were made?

There were 1,691,961,954 bicentennial quarters made through Denver, San Francisco, and Philadelphia.

10 Most Expensive Houses Currently on the Market in Idaho