The $2 bill from 1976 features the portrait of the 3rd president of the United States, Thomas Jefferson. Before, it was Alexander Hamilton’s portrait that was featured in the $2 bill when it was first introduced in 1862.

The two-dollar bill underwent various changes over the course of time. However, it was in 1976 that it received a major change. Yes, the image of Thomas Jefferson remained essentially the same but the reverse part got a major makeover. 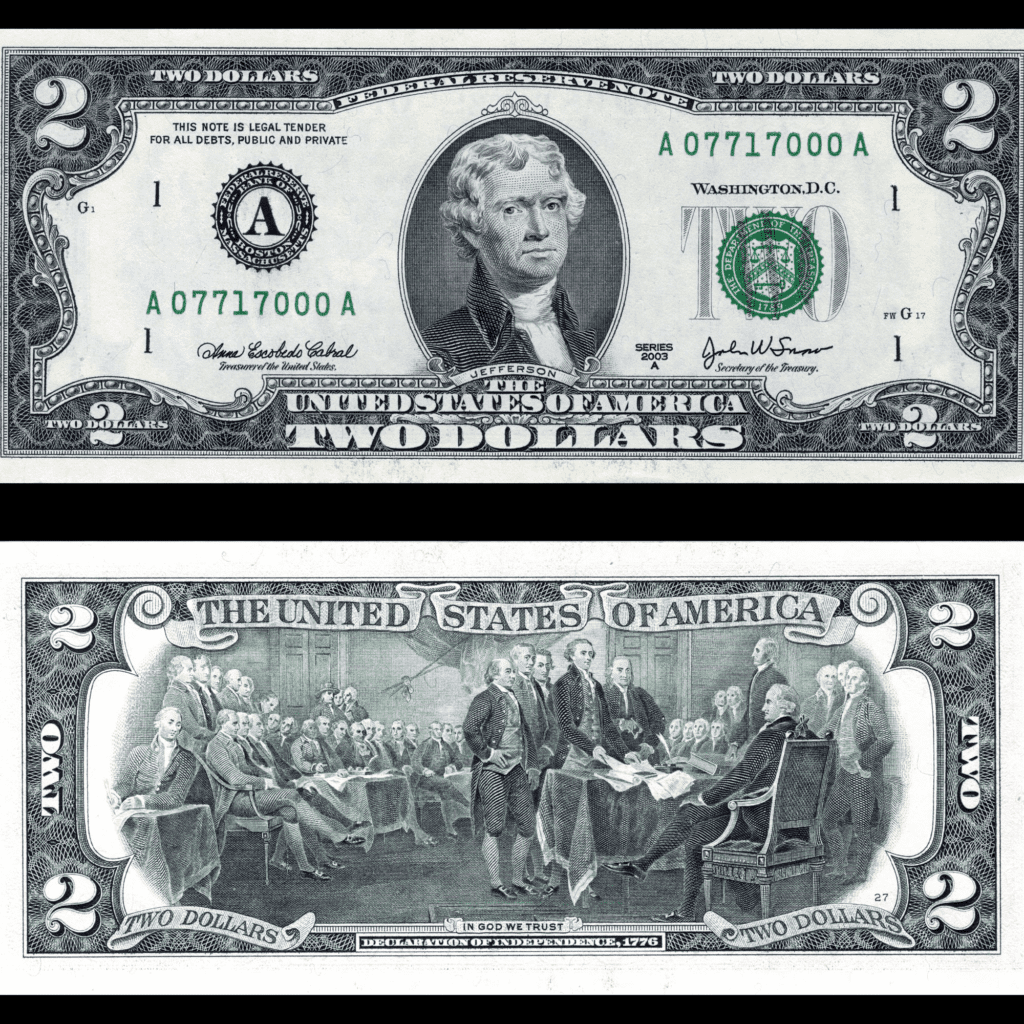 The first thing you’ll notice is that the $2 bill has green serial numbers, which are blue or red before 1976. The treasury seal also became green.

On the obverse side, there are different elements you’ll find. These are the following:

Perhaps, the most notable change you find in the 1976 2-dollar bill is the famous painting of the signing of the Declaration of Independence. This was painted by John Trumbull and the painting replaced the image of Thomas Jefferson’s house, which was included before 1976.

William Simon, the Secretary of the Treasury at that time, wanted to make the new banknote available on April 13, 1976, which coincided with the birthday of Jefferson.

The $2 bill series of 1976 had a few design changes from its previous look. What’s more interesting is that the reissue of the $2 bill also happened on the 200th anniversary of the United States’ Independence Day.

This is the reason that the reverse side of the $2 now featured Trumbull’s Declaration of Independence painting. However, the painting on the $2 note is just an engraved rendition and not an exact copy.

At the time the $2 bill was released, a lot of people assumed that the new redesigned note was a limited edition. They thought that it was made specifically to be part of the United States Bicentennial celebration.

However, this wasn’t the case at all. Because if it was, then the BEP should have stopped printing the 1976 two-dollar note, but it was printed continually for many more years.

Because of the misconception, collectors stored and hoarded a large number of the 1976 dollar notes. Some people also took their newly received $2 bill to the post office and got it stamped with the date, “APR 13, 1976.”

Are $2 Bills Still Being Printed?

Yes, the two-dollar bill is still being printed. In spite of the common belief, the BEP continually printed the $2 bill since 1862 except for a 10-year hiatus.

Today, you can still find the $2 bills but with the most recent series. If you want to confirm, you can even go to your bank and ask for $2 bills when you withdraw your money in cash.

You need to specifically ask for them because $2 bills are not usually handed out. Most banks should have a stock of $2 bills ready in case their customers requested them.

When you request the $2 bills, tellers may need to go to the vault to get them or even order the bills from other branches if they don’t have enough for you. Nevertheless, this proves that the $2 bill is still printed and available in circulation.

The normal 1976 2-dollar bill is worth as much as its face value. So, if you’re planning to sell a circulated $2 bill, you would simply get two dollars. However, if you have a $2 bill with an uncirculated condition, you could sell it for up to $15 or more.

There are some factors that could increase the value of your $2 bill. For example, if you have $2 bills with low serial numbers, you might as well get a higher premium for them.

Perhaps, the most expensive and valuable 1976 two-dollar bill is the one that received a printing error. Because they are extremely rare, these types of 1976 2-dollar bills are also more expensive than others.

Normally, each dollar bill has its own serial number. This serial number is printed twice on the front side of the bill. One is on the top right while the other is at the bottom left. For the error version, the serial numbers on the top and bottom are different, which should not be the case.

If you have this 2-dollar bill with the rare error, you might be able to sell them for $400 if it is still in good condition. The uncirculated 2-dollar bill can be sold for around $800.

Another variety of the 2-dollar bill is the ones that come with a star note. You can easily identify this bill by looking at the serial number, which should have the star image at the endpoint.

You may also want to check your two-dollar bill if it has a post office stamp. The bill can be slightly more valuable especially if you have stamps with unique city names.

As mentioned above, the serial number of your 2-dollar bill can potentially increase its value. For example, there are unusual and rare serial numbers that can make your bill unique.

One good example is the serial number, A11111111A. You can have a wide range of unique combinations of serial numbers. As long as they look different, then you should be able to sell them at a higher price.

There are different places where you can get 1976 $2 bills. You can start your search on the Internet. The most common platforms you’ll find would be online marketplaces such as Amazon and eBay. You can also find them on social media networking sites such as Facebook and Instagram. 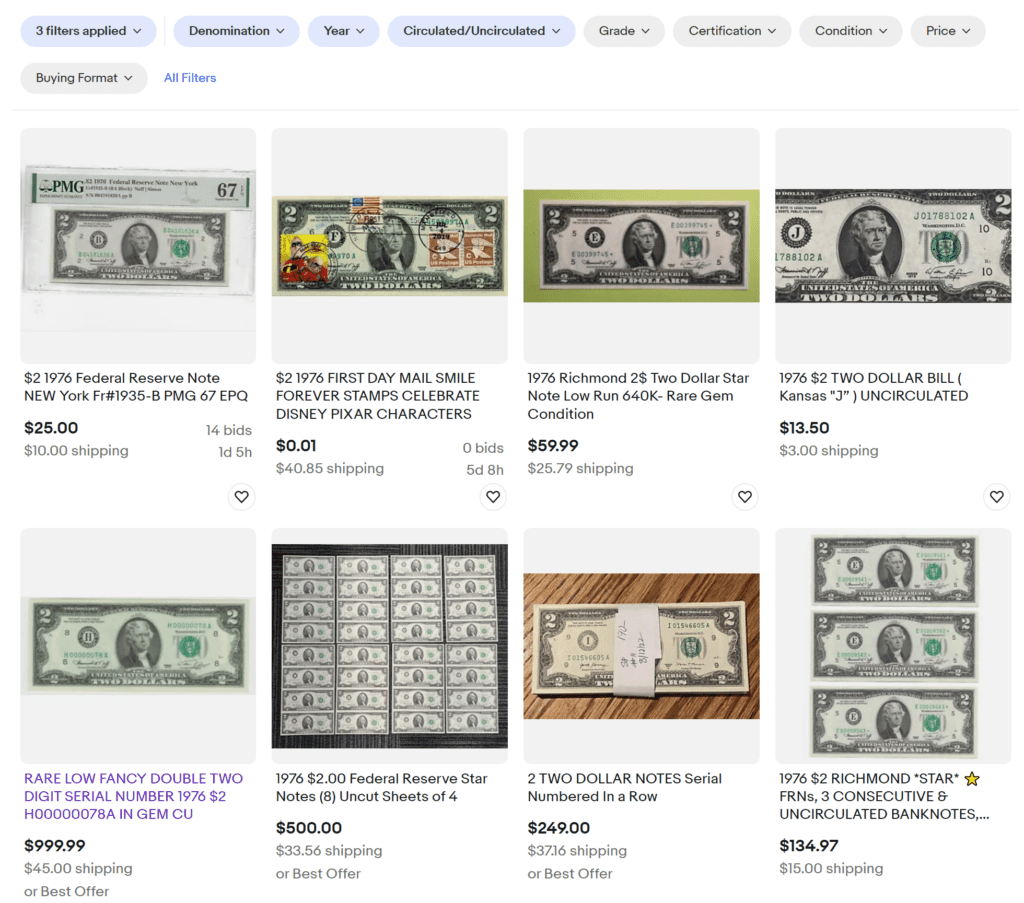 Aside from the Internet, you can buy 1976 $2 bills from antique stores and collectors.

Be sure to get the bills checked and assessed by reputable companies. There are a lot of people selling $2 bills for more than what they truly are worth.

Yes, they can be real. The two-dollar bill is genuine legal tender. However, it is not the BEP that makes gold 2-dollar bills. If you see one, the gold is privately applied.

How much is a golden 2-dollar bill worth?

The golden 2-dollar bill’s value depends on the amount of gold applied to the bill. However, you can find some of these golden bills being sold in the market for about $20 to $100.

Are 2-dollar bills with red ink worth anything?

Is there anything hidden on a $2 bill?

Some believe that there are some hidden messages on the $2 bill. Some of the most widely circulated conspiracy theories are the hidden Illuminati message. If you try to scramble the two words “two dollars,” you can get “to owls lard.”