Minecraft is the best-selling video game of all time. It is one of the most versatile video games ever launched. The game is immensely popular, both among children and adults alike.

The game offers you total freedom to express your creativity the way you want. Players can virtually build and destroy anything and everything in Minecraft.

While exploring the wilderness of Minecraft’s world, players can find several structures that are spawned naturally. The Minecraft structures, better known as generated structures, can be found throughout Minecraft World, which includes Nether and Overworld.

However, the degree of rarity is not the same for all the structures. Here we list the 8 rarest Minecraft structures you will encounter in the game. 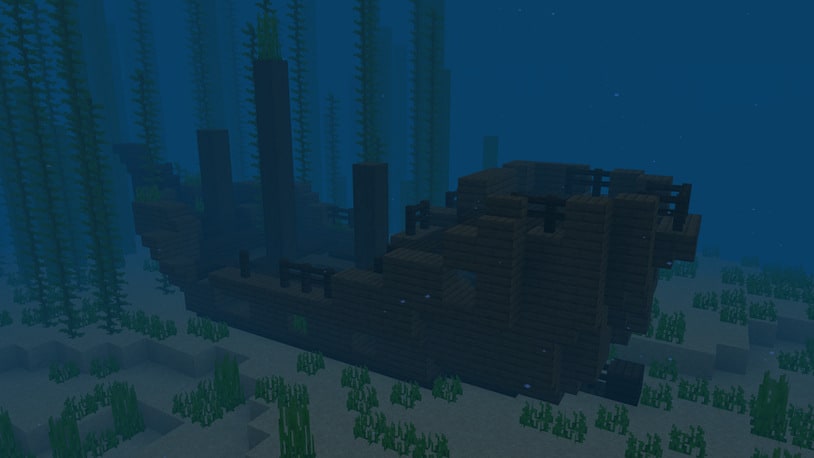 Shipwreck is a wooden generated structure in Minecraft that usually spawns underwater. However, occasionally you can also find it on the land in Beach Biome, inside icebergs, ocean monuments, underwater ruins, and ravines.

Shipwrecks look like sunken ships and come in different forms. It can be a full ship, a half ship, or a damaged one with several missing parts. Shipwrecks are made of wood and can contain up to three chests.

There are three ways to find a Shipwreck. You can locate them with the help of an Explorer Map found in the Shipwrecks. You can also seek help from an Apprentice Level Cartographer who can provide you with an Ocean Explorer Map in exchange for 13 emeralds and a compass.

The third method is to feed a Dolphin with one Raw Cod or Raw Salmon. It will then lead you to the nearest Shipwreck, Ocean Ruins, or Buried Treasure.

The Map Chest of every Shipwreck contains a Buried Treasure Map. Besides, in the Treasure Chest, you can find various valuable items, including gold and iron Ingots, emeralds, diamonds, iron and gold nuggets, and a bottle o’enchanting. 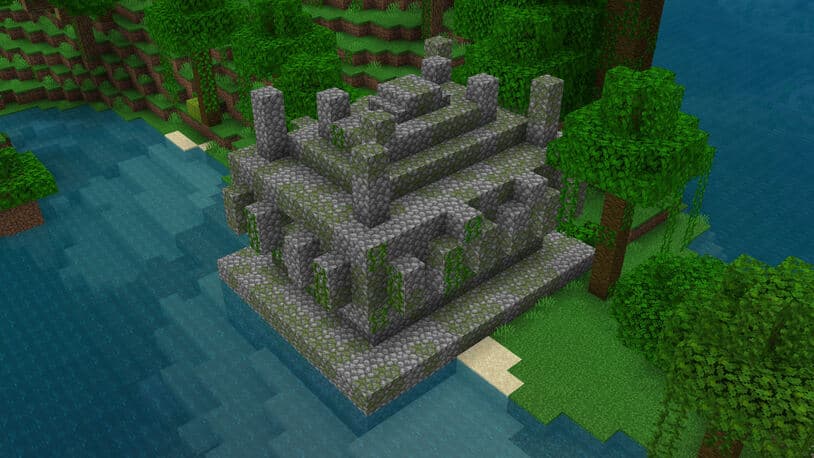 Jungle Temple is a rare structure in Minecraft that can only be found in the Jungle biome. In Java Edition, a Jungle Temple can also spawn in a bamboo jungle. Jungle Temples always spawn inside dense forests surrounded by trees, bushes, and vines. It makes it extremely difficult for the players to locate this structure.

Jungle Temples are also called the Jungle Pyramids. Each temple has three floors, where the bottom floor houses a Puzzle Hall and a Trap Hall. The inside of the temple is completely dark, so mobs are spawned frequently inside.

Jungle Temples are made of stone and thus are fire resistant. So, the easiest way to find this structure is to burn down a jungle. Fossils can only be found in two Overworld biomes, the Desert and Swamp biomes. They are always spawned within y-coordinates 0 to 320 or -63 to -8 underground.

Fossils are fairly rare. There is a 1/64 chance for each chunk to generate Fossils. They are made of bone blocks, coal ore, and diamond ore. They do not serve any real purpose or contain any loot chest.

Only five generated structures in Minecraft do not contain a loot chest; they are Fossils, Nether Fossils, Ocean Mountains, Swamp Huts, and desert walls. 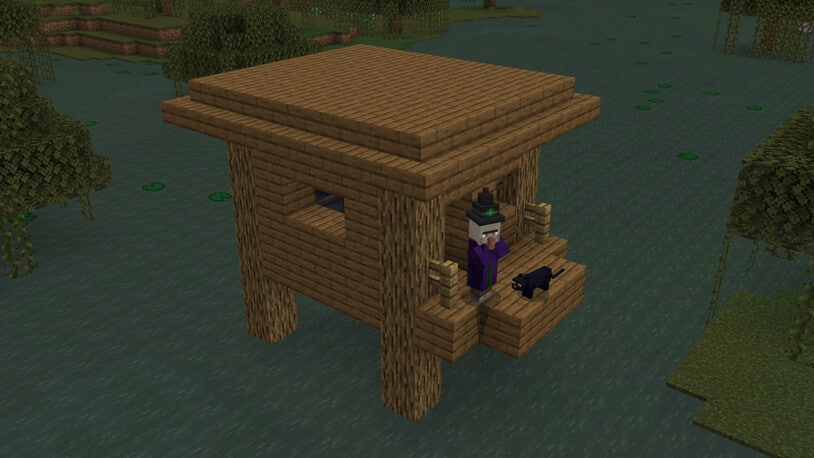 Swamp Huts are small generated structures made of oak wood logs and spruce wood planks. They typically generate in swamp water but occasionally can pop up outside the Swamp biomes.

Immediately after the generation of a Swamp Hut, a stray cat and a witch will spawn inside the hut, and they will never naturally despawn. However, when the difficulty level is set at Peaceful, witches do not spawn. As these huts are inhabited by witches, previously, they were called Witch Huts.

All the Swamp Huts have the same layout and do not contain any loot chests. The rooms have a crafting table, a flower pot with a red mushroom, and a Caudron. In Java Edition, the Cauldron is empty, but in Bedrock Edition, you can find a potion in it. It can be healing, slowness, weakness, water breathing, or fire resistance potion.

Players need to place down blocks to get up to the Swamp Huts, as there are no stairs. The witches cannot get back to their huts on their own when they fall from them.

Players can locate an Ocean Monument with the help of an Ocean Explorer Map, which can be purchased from cartographer villagers. Alternatively, Dolphins can also be used for locating this rare structure. Guardians and Elder Guardians are spawned in Ocean Monuments, and that makes the place extremely dangerous.

Guardians use lasers, and they have a high amount of health. Elder Guardians are even stronger and can survive more damage. Sometimes, Icebergs can spawn on monuments and suffocate the guardians.

Ocean Monuments are the only place where you can find Sponge blocks. 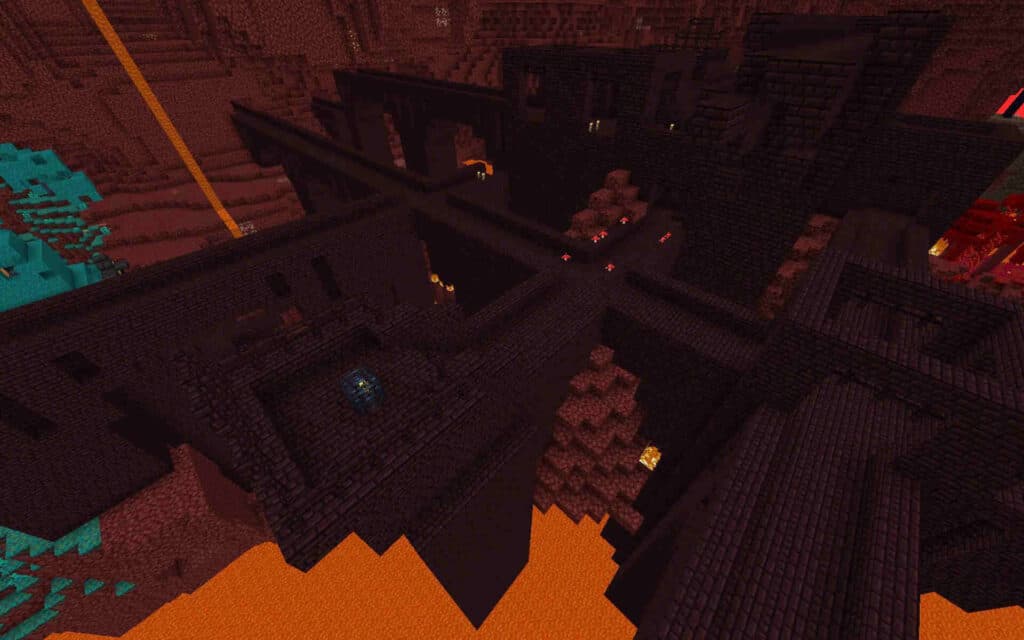 Nether Fortress has always been a fairly rare structure only found in Nether biomes. It was made further rare in 1.16. Now, it is 2-3x rarer than the previous editions.

Nether Fortresses are made with Nether Bricks and have a complex architectural structure. They have an exterior area consisting of open bridges and an area with enclosed corridors. At times, two or fortresses can be spawned very close or even within each other.

Nether Fortress is one of the only two places where the players can find Nether Wart. However, often Nether Fortresses are spawned without a Nether Wart Garden. Moreover, on some rare occasions, a generated garden can get damaged or even destroyed by falling lava. 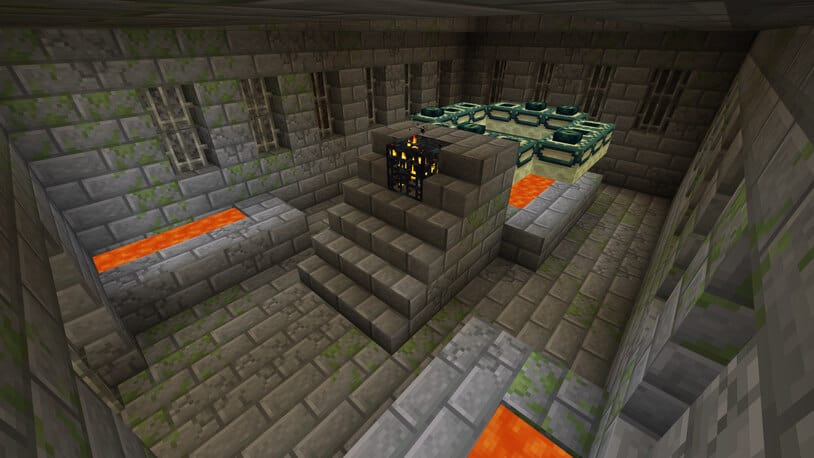 A stronghold is a rare structure in Minecraft that spawns only underground. It usually generates in biomes located above sea level but can also generate underwater when needed.

Strongholds can appear in different locations depending on the version of the game. While playing Bedrock Edition, you can mostly find them under Villages, but they can be generated randomly.

In Java Edition of Minecraft, 128 Strongholds spawn per map and appear within one of eight rings located surrounding the world spawn point. Strongholds do not appear beyond 24, 320 blocks.

Finding Strongholds is always difficult. Players can use Eye of Ender, which is crafted from an Ender Pearl and Blaze Powder, to locate this rare structure. Usually, several Eyes of Enders are needed to find a Stronghold.

Strongholds are important because it is the only place that houses End Portal. They can also contain other rooms such as Storerooms and Libraries. 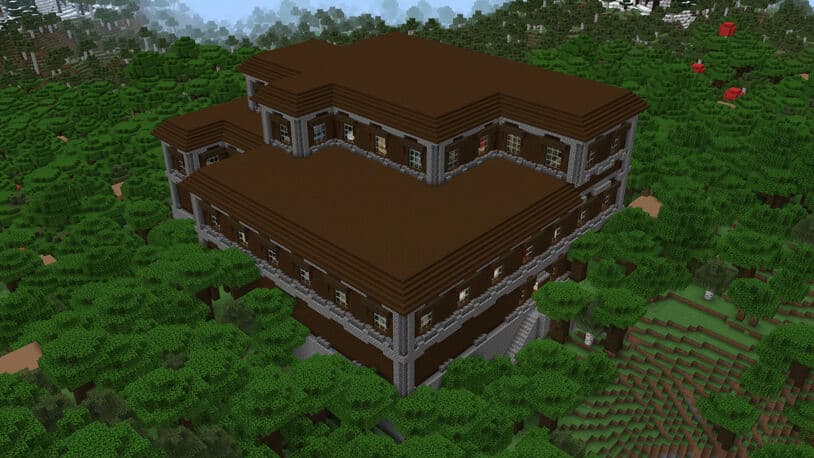 Woodland Mansions are the rarest generated structures in Minecraft. They are only found in dark forest biomes, usually located far from the world spawn point.

Woodland Mansions are massive structures and can have 52 types of rooms. However, a single mansion will never have all types of rooms. They have many interesting rooms such as a checkerboard room, spider room, bedroom, flower room, wool room, jail, cat-statue room, chicken-statue room, etc.

The rooms are full of various valuable items. You can even occasionally find diamond armor in one of these rooms.

These structures are considered dangerous because of the presence of evokers and vindicators. Moreover, other overworld monsters can also be spawned randomly because of the low light interior.

It is extremely difficult to locate a Woodland Mansion because they are always hidden behind a thick canopy. You can obtain an exploration map from a cartographer villager to find the location of a Woodland Mansion. However, the map will not always show you the nearest one, and you must select the mansion location on your tab to find the coordinates.

Woodland Mansions and raids are the only two places where the legendary Totem of Undying can be obtained.