Turquoise has been treasured as a valuable gemstone for thousands of years across different cultures. The color of this opaque gem ranges from blue to green. The mineral is a hydrated phosphate of aluminum and copper. It is formed when groundwater containing copper or aluminum seeps through rock and reacts with phosphorus.

Turquoise is exceedingly rare because it is found only in a few places in the world. It only occurs in dry and barren regions. Finding it in finer grades is even more difficult.

It is one of the most ancient gems in the world, with more than 7000 years of history. Archaeological evidence suggests turquoise was used in jewelry in ancient Egypt and China.

Turquoise formed in various mines differs in color, pattern, and quality. Here, we list the 9 rarest types of turquoise that are found around the world.

Raindrop turquoise has been recently identified by gem experts in China. It is found in Hubei and is characterized by bluish-green color spots resembling raindrops. This type of turquoise is highly sought after in the Chinese jewelry market due to its unique pattern.

The base color of this type of turquoise is pastel blue. Along with the raindrop spots, occasionally, veins can also be observed.

Turquoise deposit is widespread in China, and Hubei is the major exporter of this gemstone. 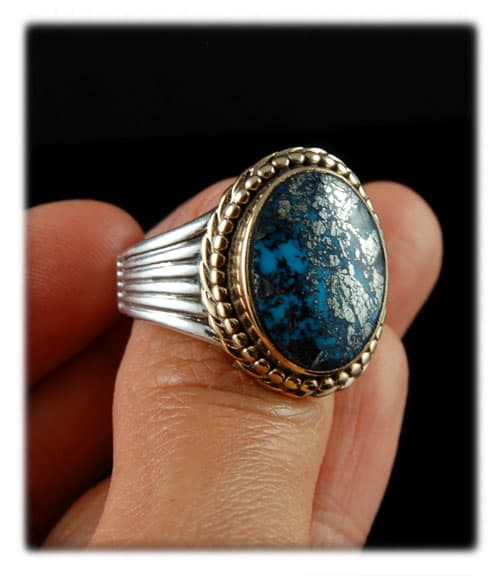 Morenci Turquoise mine is located in the southeastern part of Arizona. This turquoise used to be extracted from a large open-pit copper mine. The operation of the mine began as early as 1864. The mine was a major producer of gemstones and produced some of the best quality turquoises. Gems from this mine were widely used in American Indian Jewelry for years.

Turquoise from this mine is known for its true-blue color with a beautiful pyrite matrix. However, turquoises of many other shades of blue and green were also available in this mine. The rarest is the sky-blue stone with a golden pyrite matrix.

The Morenci mine has been closed for many years, but a tiny amount of turquoise still comes to the market each year from the previous stock. 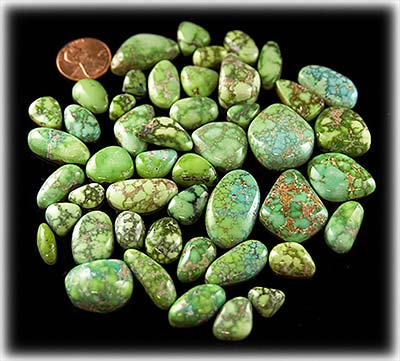 Carico Lake Turquoise is extracted from a mine south of Battle Mountain in Lander County. The mine gets its name from an ancient lake that was located in this area and dried up.

Turquoises from this mine come in multiple shades of blue and green. Some stones can feature both blue and green tones. However, the mine is most known for its beautiful lime green gems.

The gem gets a bright green color from high concentrations of zinc. Some believe that the green turquoise from this mine is a form of Faustite, but that is debatable.

The mine has supplied a fair amount of turquoise for decades. However, currently, due to limited mining, the supply is very low.

Carico Lake mine was originally owned by Gus Stenich. Before his death, he wrote his will on a bread wrapper and left the mine to his friend J.W. Edgar. The mine is currently owned by Ernie Montoya’s Silver Sun. 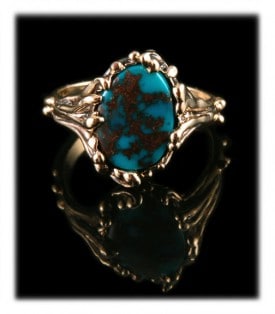 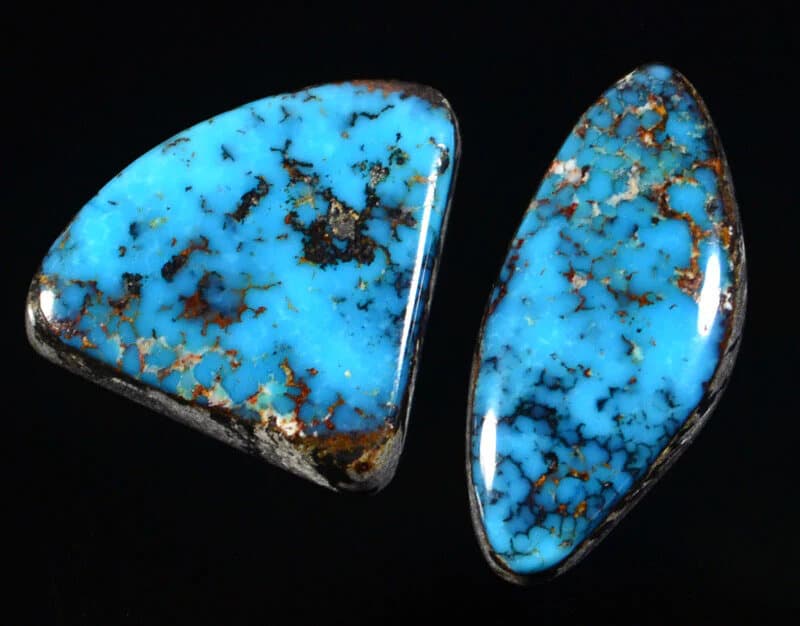 Candelaria turquoise is extracted from the mines located in the Candelaria hills of Mineral County, Nevada. This area is usually mined for silver, copper, and gold. The mines were leased to turquoise miners only occasionally. It makes this type of turquoise very rare and collectible.

Usually, a good quality Candelaria Turquoise is dark blue in color with an erratic black or brown non-webbed matrix. However, the high-grade gems are translucent dark blue with a burnt reddish-brown spider web matrix.

The finest Candelaria turquoise is found in the Northern Belle open pit silver mine. It is located in a part of the mine that is almost impossible to reach. 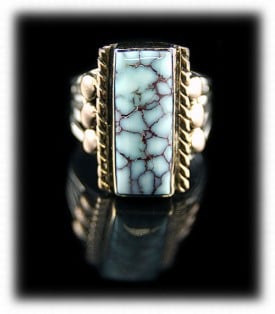 Dry Creek Turquoise is known for its creamy light blue pastel shade and matrix colored golden to cocoa-brown. It is found in a small mine located outside of Austin, Nevada.

The mine was discovered in the early 1990s by the members belonging to Shoshone Native American Tribe. The tribe is not into jewelry making, and the owner had leased out the mining rights to different companies on a limited basis.

After the owner died, mining was stalled due to family disputes. This makes Dry Creek turquoise exceedingly rare. Later, turquoises were recovered from other mines in the region, but they lacked quality.

All the high-quality gems found in the market today were actually mined in the 1990s.

When Dry Creek Turquoise was first discovered, experts were unsure whether it was genuine turquoise due to its unique color. However, lab testing done in 1999 confirmed that it was indeed turquoise. 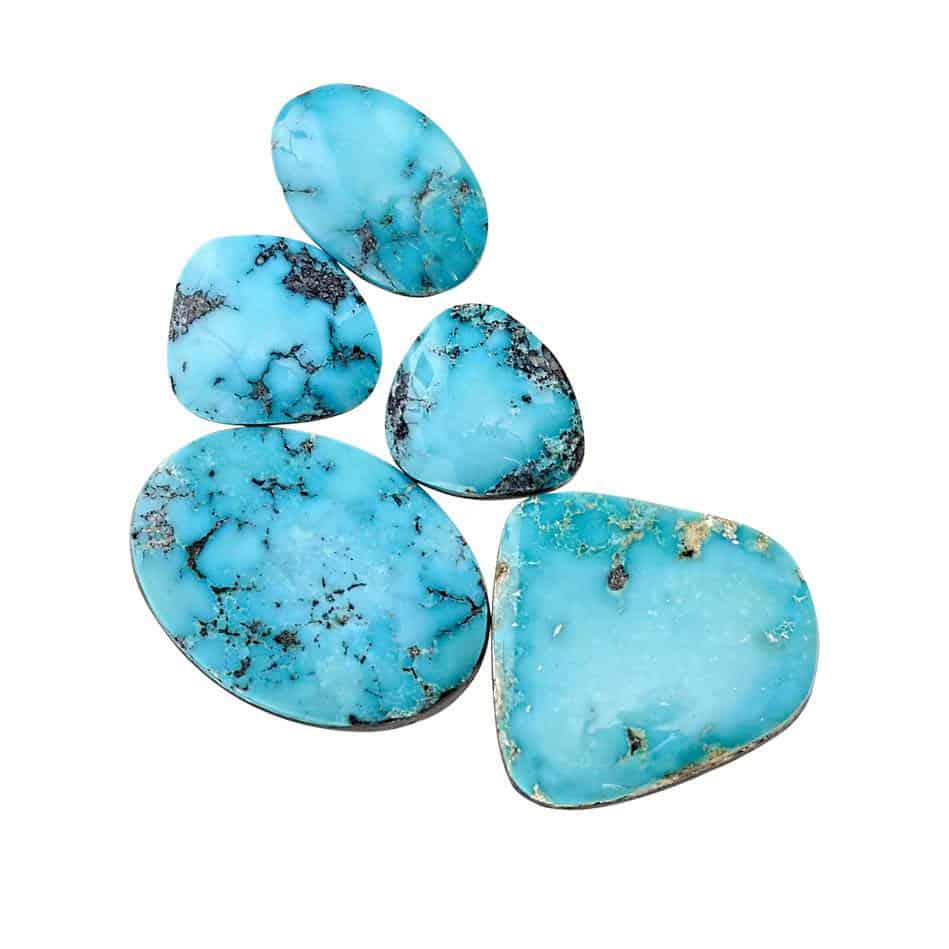 Darling Darlene mine was discovered in the early 1970s by Joe Barredo. He named it after her daughter Darlene who died at a young age.

He continued mining from this remote turquoise mine located in the Battle Mountain area, Nevada, for almost a decade. He was joined by his son-in-law in the effort.

Turquoise pieces extracted from this mine are quite hard and come in different colors. They range from pale blue to dark vibrant blue and even green.

The Darling Darlene mine was functional for almost a decade. However, only a small amount of turquoise could be collected mainly due to extreme weather conditions and remote locations. Currently, the mine is a part of a gold mining operation. 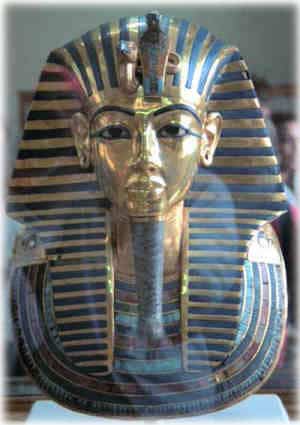 Turquoise has been used in Egypt since at least 6000 BC. In ancient Egypt, the stone was considered sacred, having metaphysical power. During that era, turquoise was used by rulers, Pharaohs, and spiritual healers.

Until recently, it was believed that the Egyptian turquoise mine had been depleted. However, sometime during the late 2010s, Turquoise expert Russel Twiford claimed that every now and then, some pieces of Egyptian turquoise can still be found in this region. 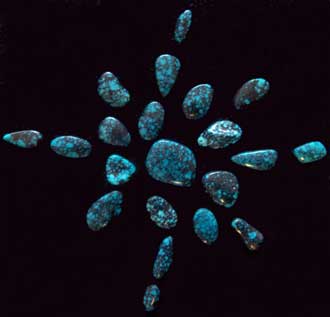 Lander Blue Spiderweb is the rarest turquoise in the world. It is found in a small hat mine located in Lander County, Nevada, between Tenabo and Battle Mountain. The mine was discovered in 1973. Only around 120 pounds of turquoise has ever been extracted from this mine.

Turquoises produced in Lander Blue mine are deep blue to Robin Egg blue in color with a beautiful jet black spiderweb pattern. Occasionally you can find brown matrix clunks too. The turquoise also has a semi-translucent glassy quality to it. The look is unique and doesn’t match any turquoise found anywhere else in the world.

The word hat mine refers to a small deposit of turquoise that can be covered with a hat. 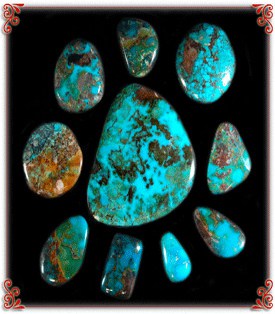 Bisbee Turquoise is arguably the most beautiful and rarest type turquoise ever found on earth. The color ranges from soft pale blue to brilliant shining blue, and every shade of blue in between. The highest grade Bisbee turquoises have a brownish-red spiderweb pattern on them.

Bisbee turquoise is found in the copper mine located near Bisbee, Arizona. A deposit of this rare turquoise was found in the 1950s in the Lavender pit region. The mine was owned by Phelps Dodge Corporation. The company didn’t make any effort to recover the turquoise and dumped them in a nearby field.

Company employees who recognized the beauty of the gem would sneak a small amount of turquoise into their lunch boxes. Besides, the company would let locals collect turquoise from the dump once a year for a nominal fee.

In 1972, the dumps of the Lavender pit were leased out to Bob Mathews. He was the only legal miner of Bisbee turquoise in history.

Mathews and his associates worked for two years in the mine and sold a large chunk of the recovered turquoise to various artists and traders. In 2002, the remaining 500 lb was handed over to Durango Silver Company.