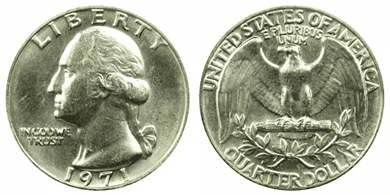 However, if you find a quarter that was struck on or before 1964, you have a silver quarter. From 1932 to 1964, the quarter dollar was most likely made of silver.

The 1971 quarter bears the image of George Washington on the obverse side. At that time, he was facing towards the left, which is different from what you see in the current quarter, which has Washington facing the right.

On the reverse side, you’ll find the American eagle with its wings spread out and its feet perched on a branch with olive leaves. On top of the head of the eagle is the US motto, “E Pluribus Unum,” which means out of many, one.

On the uppermost are the words, “UNITED STATES OF AMERICA.” On the lowest part, you’ll find the inscription, “QUARTER DOLLAR.”

The 1971 Washington quarter was designed by John Flanagan. The quarter dollar, or quarter for short, is worth 25 cents. The coin’s obverse has long featured George Washington’s bust. However, the reverse side has undergone various design changes after 1998.

Here are the following: 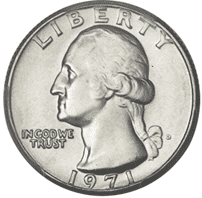 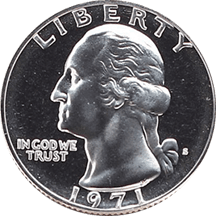 1971 Washington Quarter with no mint mark 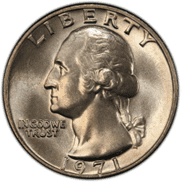 The 1971 quarter dollar with no mint mark is minted in Philadelphia. As you can see, the mint mark “D” indicates that the coin was struck in Denver while the “S” tells you it’s from San Francisco.

When the 1971 quarter was made, there were rare errors. For one, new planchets were used. So, the minting process was in its top shape.

However, there are still rare quarters with errors that are available in the market. For example, this quarter was struck on a smaller copper-nickel blank making it slightly lighter than the normal one. It is only 4.81 grams compared to the standard weight of 5.67 grams. This coin is considered an orphan off-metal: 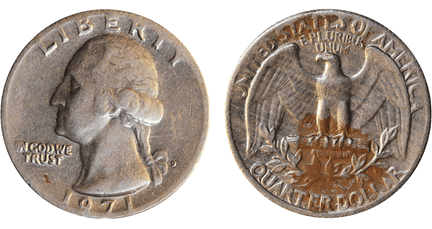 As you can see, the 1971 quarter isn’t that rare at all. You can easily find them on the Internet or at coin collectors’ places. It’s widely circulated and you can even find them in pocket change.

However, there are those that are extremely rare 1971 quarter coins. These coins are usually the coins struck incorrectly.

The errors made in minting make a coin unique and different from the rest. The error makes the coin rare and difficult to find.

The 1971 quarter isn’t that valuable. Because it isn’t rare, plus it doesn’t have any special sentimental value in it, you won’t be able to sell it at a higher price.

If you try to look into the price list, you’ll find the 1971 quarter to be around $0.25 to $7. The $7 is already a certified mint state condition. Anything that’s more expensive than that is extremely rare.

Coin grading works by looking at the coin’s attractiveness, special features, rarity, and preservation. The highest graded 1971 quarter got an MS65 grade. This means that the coin has an attractive luster and high quality of strike. 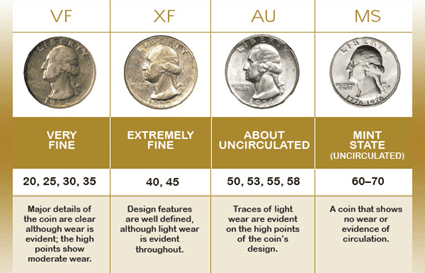 A coin’s grade is to some extent subjective. Using a grading system ensures that the grade given to a coin is based on a standard that everyone can rely on.

Nevertheless, coin grading isn’t an exact science. Thus, don’t be surprised if some experts would disagree with each other.

There are different places where you can buy the 1971 quarters. Since this coin is widely circulated, you can quickly find them if you are planning to buy one. You can go to pocket exchanges, coin shops, and antique stores.

Aside from that, you can find a host of 1971 quarters available on the Internet. You need to simply do a Google search (or whichever search engine you prefer), type in “buy or sell 1971 quarters,” and you should get a good result.

Alternatively, you can just go straight to popular marketplaces such as Amazon, Etsy, and eBay. These websites allow you to sell your coins. Simply create an account and start selling. At the same time, you can also buy coins from them.

There are also some websites that specialize in selling and buying coins. You can give them a try.

The mint mark on a 1971 quarter is located just next to the end of Washington’s ponytail, on the obverse side. The Mint mark can be D, S, or P. Those with no mint mark were made in Philadelphia.

How much is a 1971 Canadian quarter worth?

Eddie Van Halen is known to have used the 1971 quarter and placed it on his special guitar named Frankenstrat. 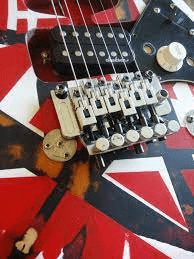 Eddie had a problem with his electric guitar. Every time he tried to do his special moves, the bridge would recess into the body. This made the guitar a little more stable.

He took a quarter and drilled a hole into it. He then placed the quarter on the bridge to solve the problem. He chose the quarter because it is just the right size for the purpose.