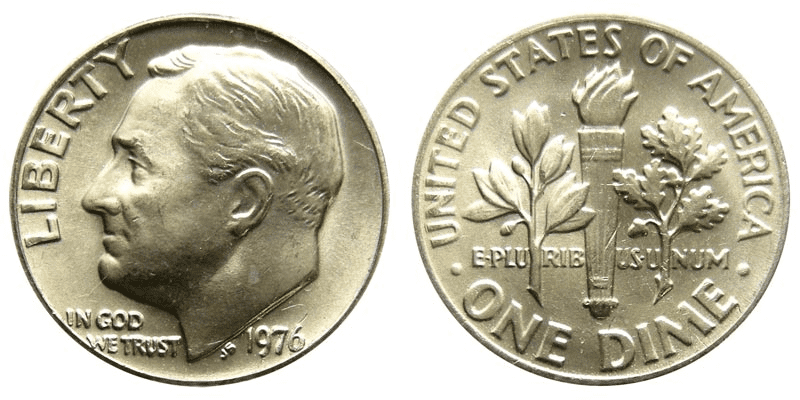 When it comes to design, the 1976 dime features an image of left-facing Franklin Roosevelt who served as the 32nd President of the United States. On the obverse side, you’ll find the following inscriptions:

The Roosevelt dimes were first made in 1946, just a few months after Roosevelt passed away in 1945. As a way to honor the president who greatly contributed to the establishment of the March of Dimes organization, his bust appeared on the dime.

The dime is considered to be the smallest of all the U.S. coins minted today in terms of its thickness and diameter. The word dime came from the French word disme. It means tithe or “tenth part.”

The dimes were first introduced in 1796. From that year to 1965, the dime is dominantly made of silver and a little copper. The Coinage Act of 1965 caused the removal of silver for the dime. Nevertheless, the U.S. Mint issues a Silver Proof Set of dimes every year for collectors.

The 1976 Roosevelt dimes come in various designs. They primarily differ in their mint mark. However, there are also those 1976 dimes that were made with errors, giving birth to a rare variety.

Here are some of the most common 1976 Roosevelt dime varieties. 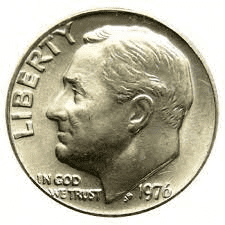 When a dime is made in Philadelphia, it usually doesn’t have the mint mark, “P.” 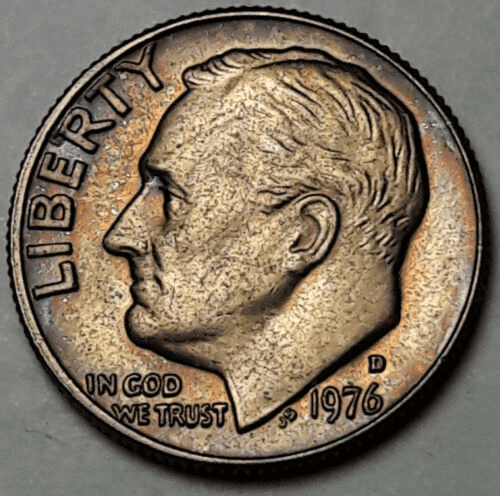 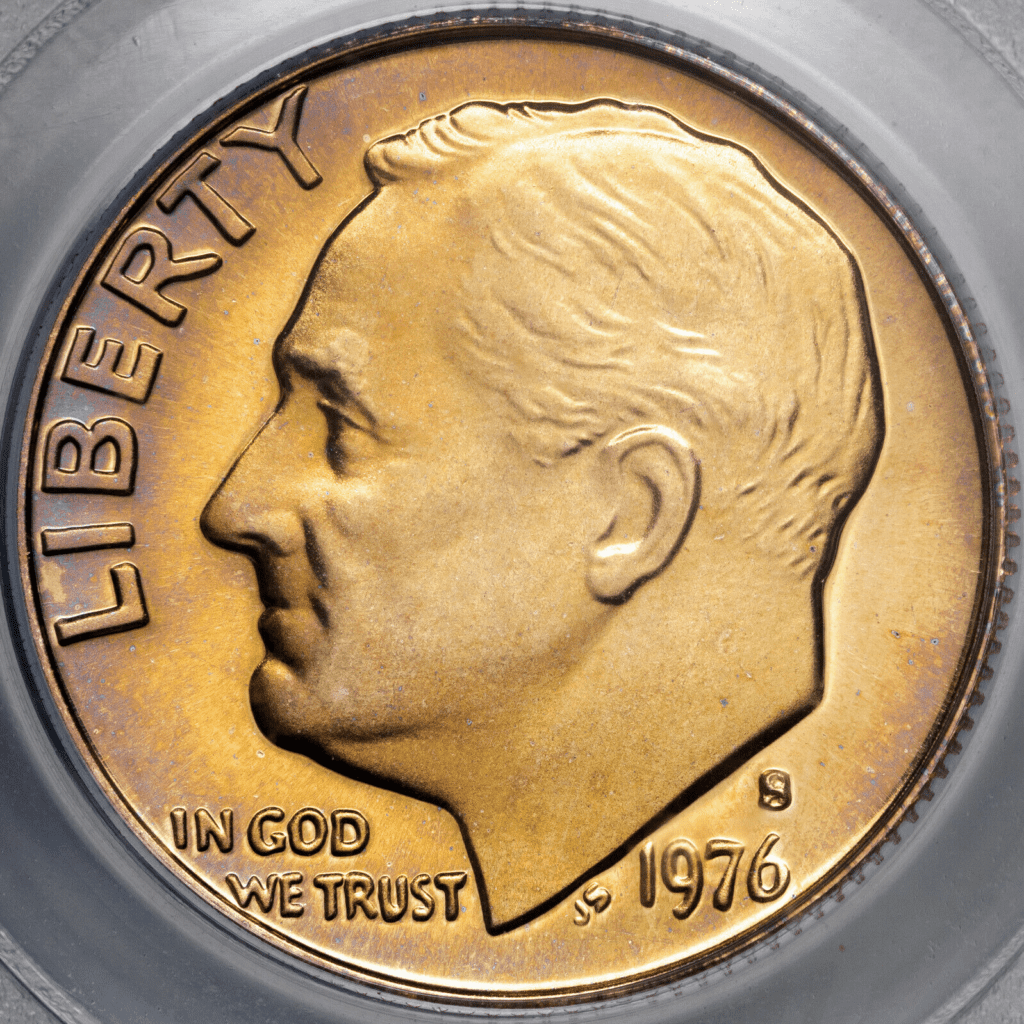 The 1976 Roosevelt dime with an S mark was made in San Francisco.

With lots of Roosevelt dimes produced, it is not difficult to see that there are dimes made in error. Here are some of the most common ones:

The Roosevelt design was introduced in 1946 and it has been used to this day. Although it was made with an iconic image, it has met a lot of initial problems.

Chief Engraver John Sinnock designed Roosevelt’s bust that you now see on the dime. He created various designs and was rejected until one of his designs was accepted on January 6, 1946.

How Much Is A 1976 Roosevelt Dime Worth Today?

Rarer 1976 dimes can be sold for a higher price. Usually, these coins are the ones made with errors. Since these errors are accidental, you get a unique dime making it rare. If you do a quick online search, a rare 1976 Roosevelt dime can be sold for as high as $300.

Like what was mentioned above, the U.S. Mint releases a Silver Proof Set of dimes annually for collectors. Usually, the price is a little bit higher than $100. If you have one of these sets, then you can sell them for a bigger price.

You can buy or sell 1976 dimes online. eBay and Amazon are two of the top online marketplaces that you should try. There are also social networking sites such as Facebook, Instagram, and Twitter.

Aside from the Internet, you can visit coin shops, coin exchanges, antique shops, pawnshops, and collectors hubs to sell your 1976 dimes or buy one from them.

Whether you are buying or selling 1976 dimes, you need to be extra careful in choosing who you deal with. There are sellers who make outrageous claims and price their coins unrealistically high. If in doubt, always have an expert examine the coin.

Yes, the 1976 dimes have the mint mark of “D” and “S.” D stands for Dever and S refers to San Francisco. Dimes without a mint mark were produced in Philadelphia.

There is no 1976 gold dime. However, some private entities get a 1976 dime and coat it with gold, increasing its value. The 2016 W Mercury Centennial Gold Coin is the only official gold dime produced by the U.S. Mint. Only 125,000 gold dimes were released.

No, the 1976 dime isn’t rare. You can easily find them on coin exchanges and shops. There were over 1.2 billion 1976 dimes produced, making it a common coin.