Coin collection is one of the oldest hobbies in the world. Archaeological evidence suggests coin collection as a hobby existed even in Ancient Rome and Medieval Mesopotamia. Coin collection in its modern form began in the fourteenth century during Renaissance.

Many factors contribute to the value of a coin, and rarity is one of the most important among them.

Here we list the 9 rarest Canadian coins that are considered extremely valuable. 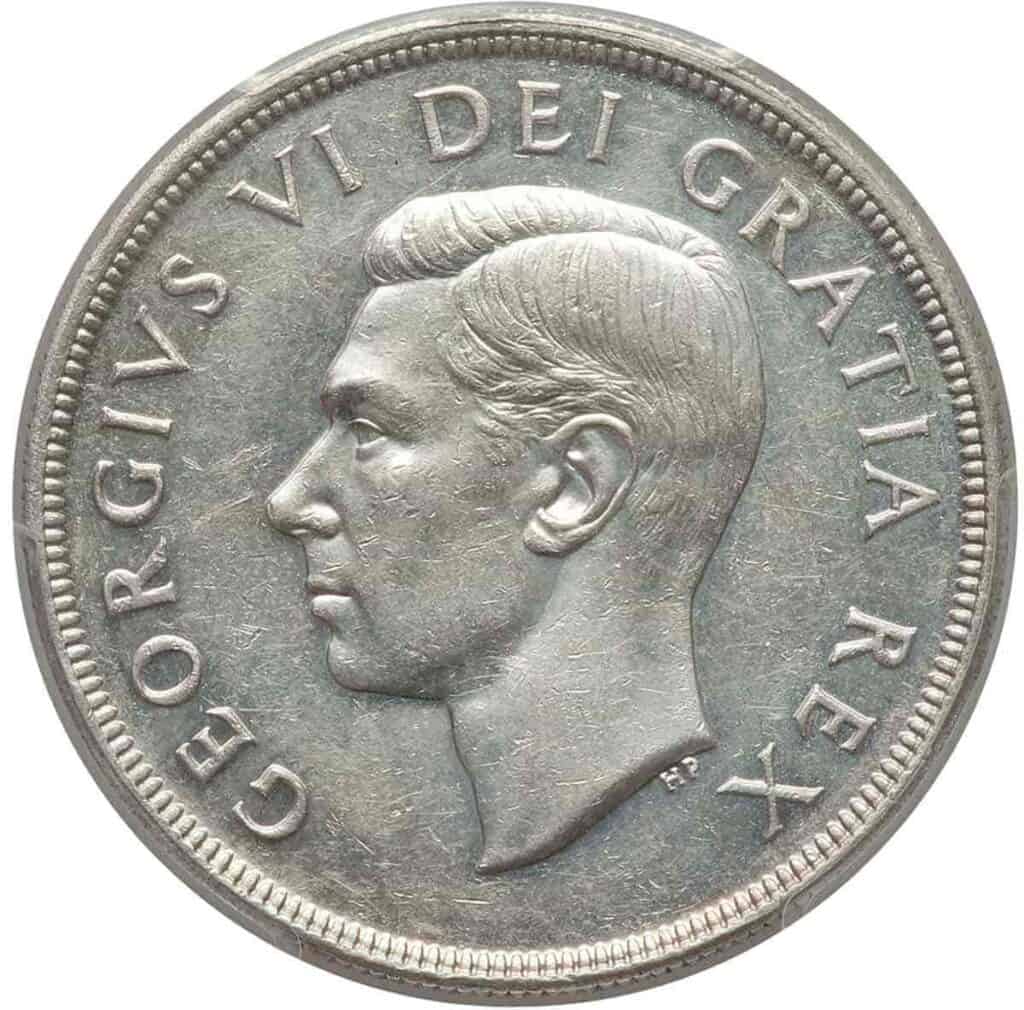 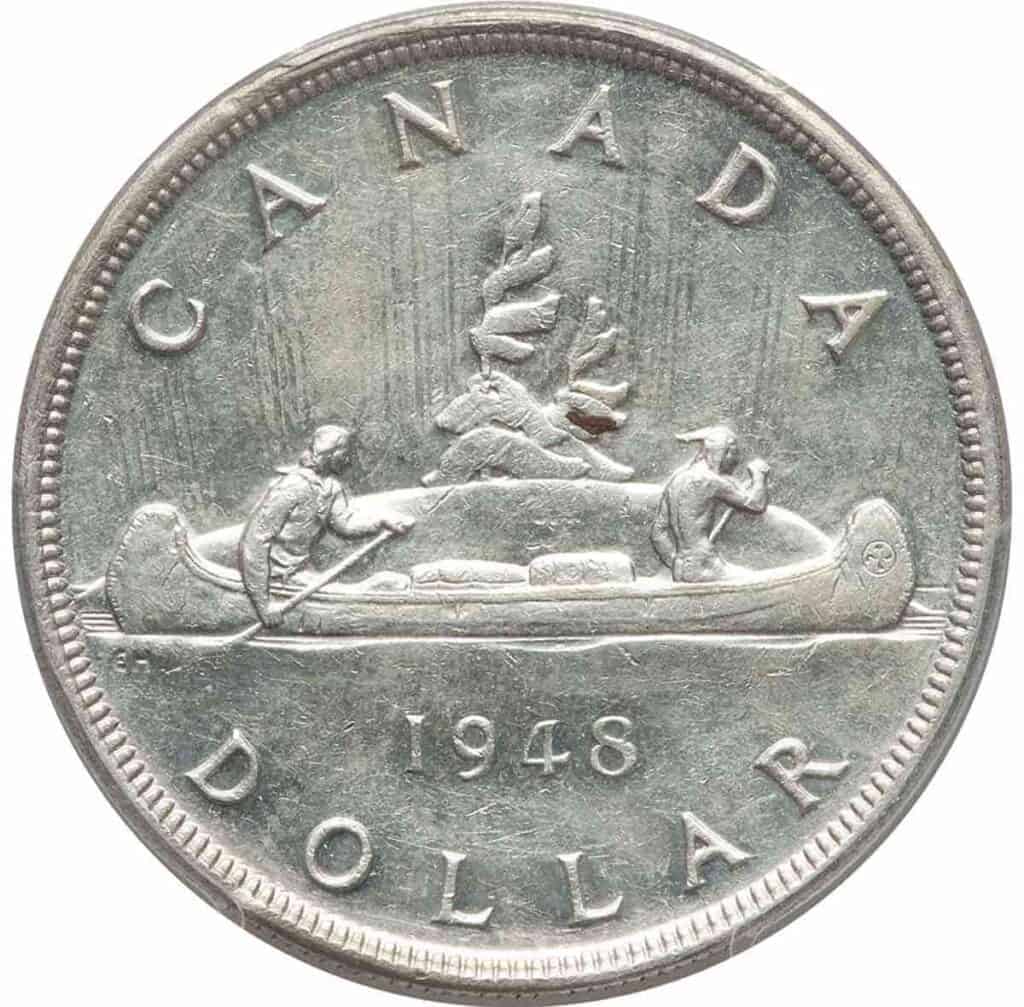 Traditionally, the obverse of the Canadian coins features the effigy of the reigning British Monarch and their name with royal title in Latin inscription. Before 1948, the legend surrounding the bust of the then monarch George VI read “George VI by the Grace of God, King, and Emperor of India”.

This required to be changed as India gained its independence in 1947. However, it took a while to prepare the new die with the corrected design. The Royal Mint of Canada received them sometime around the middle of 1948.

The delay led to low mintage, and only 18,780 examples of the 1948 Canadian dollar could be produced. It is believed that only a few of these coins have survived, and the number of known specimens is less than 1000.

Before receiving the revised die, the Royal Mint of Canada continued to produce coins with the older design and date. A tiny maple leaf was added next to the date (1947) to denote that the coins were minted in 1948.

Canadian Five-cent coins dated 1921 are considered the Pince of Canadian Coinage. It is one of the rarest Canadian circulation coins. The government passed legislation in 1921 authorizing the replacement of silver 5-cent coins with nickel ones. The size of the coin was also altered.

As a result, the mint melted down the majority of the 1921 silver 5-cent coins. Today only around 400 of the silver 5-cents exists that was produced in 1921.

Around 2.6 million coins were minted for this issue. The mint had to melt almost the entire mintage along with some coins from earlier years. It is believed that more than 3 million 5-cents coins were melted during this time. 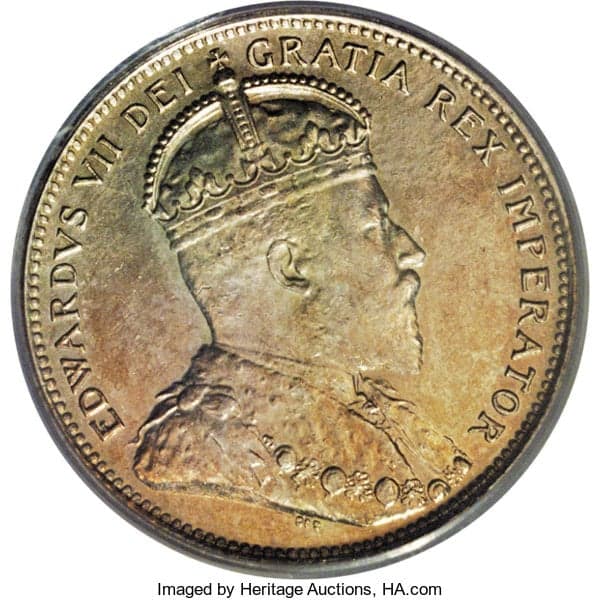 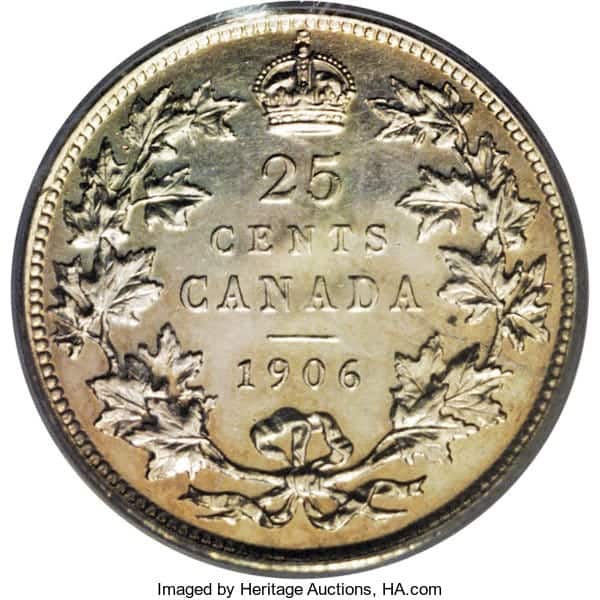 1906 Edward VII 25 Cents Small Crown variety is among the rarest Canadian Quarters ever produced. In 1906, the reverse of the Canadian quarters was redesigned to increase the coins’ longevity and enhance their look. In the redesigned coin, the crown was larger, and the leaves looked different.

It is believed that the mint produced around 100 pieces of quarters in 1906 using the older die before it was replaced.

About 75% of the known examples of this coin are in worse condition than VG. Many of them are completely rubbed off.

The 50-cent piece issued in 1921 is one of the rarest Canadian coins. The Charlton Standard Catalogue of Canadian Coins estimates that 206,398 pieces of 50-cent coins were minted in 1921. However, due to the low demand of 50-cents, most of them never entered the circulation and remained in storage.

In 1929, when the demand for 50 cents was increased, the mint authority decided to melt the entire stock to mint the newer version of the 50-cent pieces. The decision was taken because they believed the introduction of older coins dated 1921 would create confusion among Canadian citizens as they might suspect new-looking coins bearing old dates as counterfeits.

Only 75 examples of rare coins are known to survive. Experts believe these coins were placed in specimen sets sold to the Mint visitors. 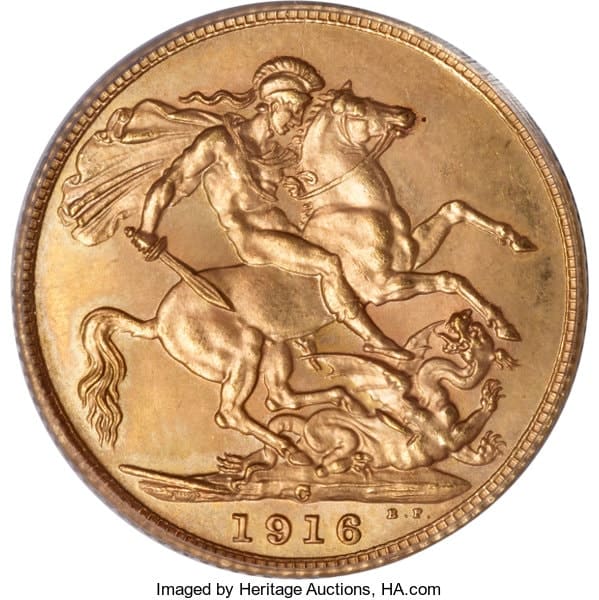 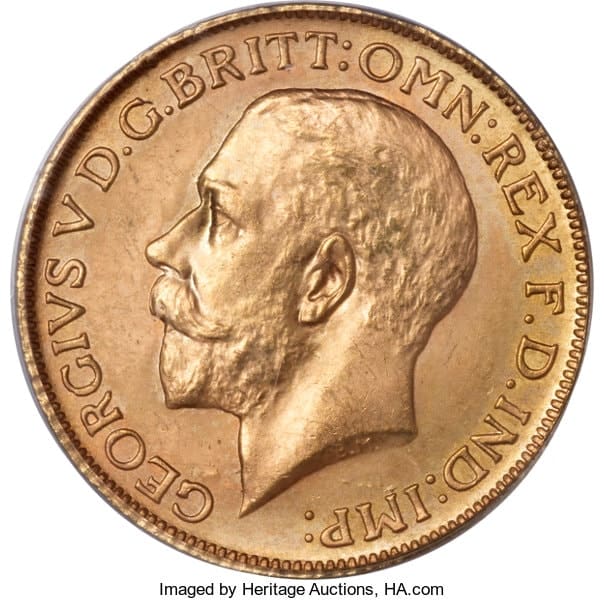 A sovereign is a British gold coin with a nominal value of one pound. From 1850 to 1932, colonial mints, including Australia, Canada, and India, also struck sovereigns. The 1916-C sovereign is considered the rarest and most valuable among all the Canadian sovereigns.

6,111 pieces of this coin were minted in the Royal Mint of Canada, Ottawa. However, only a tiny fraction of it survived, and about fifty known specimens of this coin exist today.

There was a rumor that the mintage was lost at sea while being transported from Canada to England during WWII. However, this was refuted, and no supporting evidence could be found. 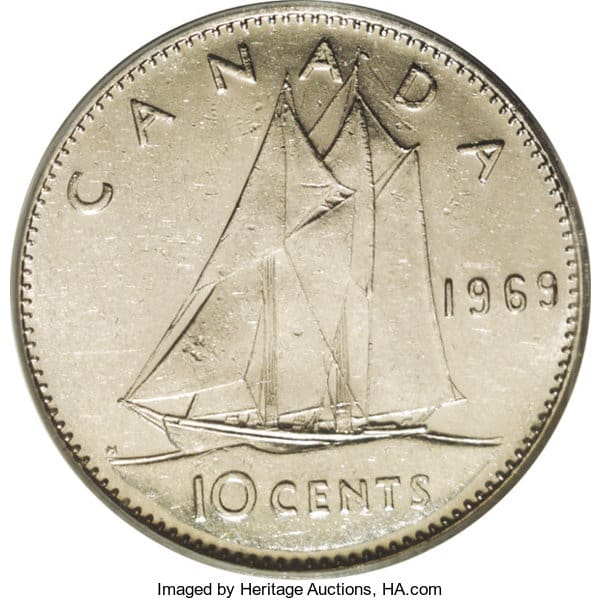 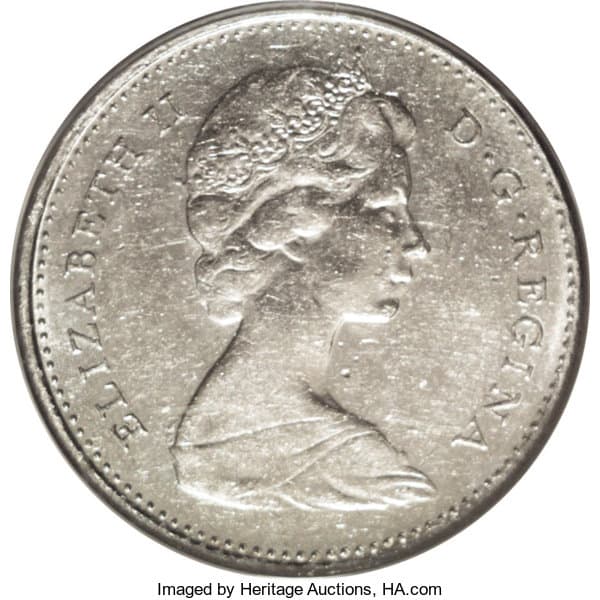 The 1969 Canadian 10-cents large date variety is a mint error coin. The regular ten-cent coins produced in 1969 were entirely remodeled. The date and devices were significantly smaller in style than the older design produced from 1953 to 1968.

However, only a small batch of coins was accidentally minted with the earlier reverser master die, and thus the dates were larger. It is still unknown how many of them were circulated. The Professional Coin Grading Service (PCGS) has graded only five examples of this coin. However, it is believed that there are a few more examples that exist, but the total number is no more than 20.

The existence of this error coin was not confirmed until nine years after it was released. 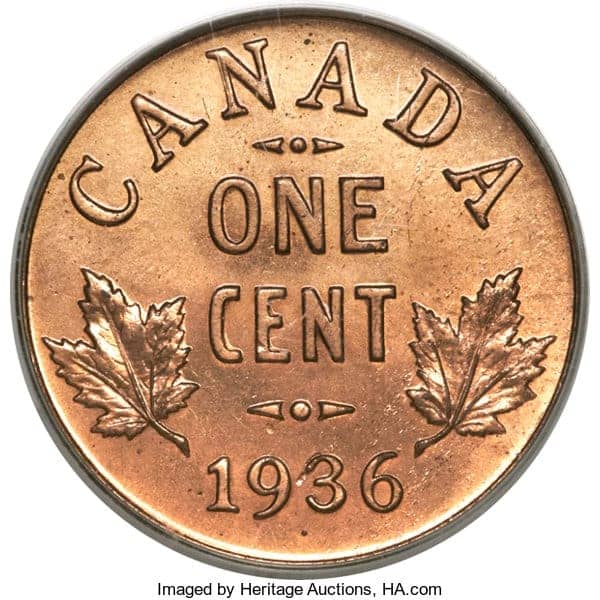 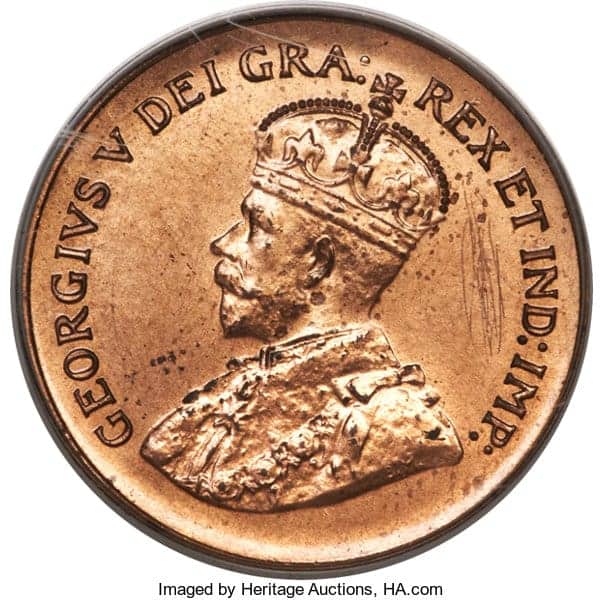 The 1936 Canadian Dot Cent is one of the most sought-after Canadian coins ever produced.

In 1936, after the death of King George V, his son King Edward VIII ascended to the throne. However, within a few months, in December 1936, Edward relinquished the throne to marry American socialite Wallis Simpson.

The Royal Canadian Mint was already in the process of preparing the new die to mint coins with the effigy of Edward VIII. However, this sudden abdication stalled the process and created chaos. After Edward VIII, his younger brother, George VI, assumed reign over the British Empire.

The Mint didn’t have enough time to prepare the die with the impression of George VI before the country ran into a coin shortage. Thus, they decided to release a small number of coins with the old design bearing the image of George V. A raised dot was added just below the date to differentiate them from 1936 coins. So, although the coins are dated 1936, they were actually produced in 1937.

Three denominations were struck with dots: 1-cents, 10-cents, and 25-cents. However, the anticipated coin shortage never happened, and only 25-cent coins were put into circulation. The others were released only as specimen copies.

All three Dot coins are rare and considered extremely valuable, but the 1-cent is the rarest. Only 3 examples of this coin could be traced by numismatic experts.

All three specimens of the 1936 Dot Penny were in the collection of legendary collector Joh Jay Pittman until he died in 1996.

The 1911 Canadian Silver Dollar is nicknamed the Emperor or Holy Grail of Canadian Coins. The Royal Mint struck only three examples as pattern coins, two in silver and one in bronze. They were rejected and never made it to circulation.

The bronze coin and one silver dollar are now part of the Bank of Canada’s National Currency Collection. Thus, only one example of the 1911 silver dollar is now available for private collection.

It is still unknown how these pattern coins got out of the mint as they were never meant for circulation. Many believe the coins were squirreled by then deputy-master of the mint Sir William Ellison-Macartney, who left the Royal Mint in 1913. The coin was in possession of his family for 49 years before it appeared in a public auction. 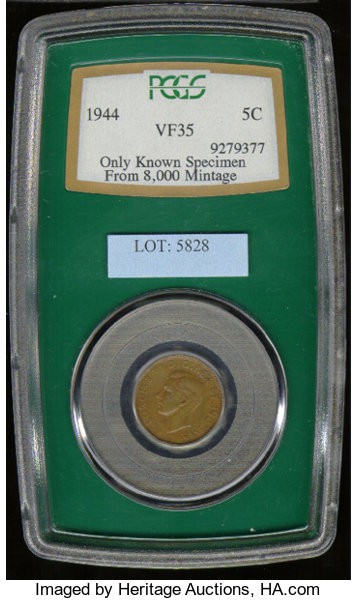 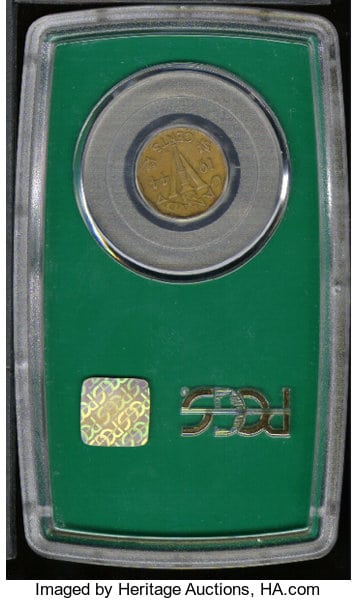 1944 Tombac five cent is the rarest Canadian coin with only one known example. During World War II, Canada faced a severe shortage of nickel as most of them were used in arms production. As a result, the mint was forced to use tombac brass alloy to make the coins.

In 1942, a substantial number of 5-cent coins were minted with tombac. The same design and metal were continued in 1943 as well.

In 1944, 8,000 pieces of tombac 5-cent were minted before the mint decided to switch to steel coins with nickel and chromium plating. It is unknown what happened to the rest of the 7,999 coins. They were probably melted down by the mint while this single piece somehow escaped.

The only known example of this rare Canadian coin was sold by Heritage Auction in 1999 for US$41,090. However, the owner indicated they would sell the coin for $777,778.

9 Most Expensive Nendoroids Ever