10 Rarest Coins in the World

Have you ever found old pennies or silver dollars that made you wonder if you’d discovered rare and valuable coins? You might be surprised to learn that there are countless old and rare coins to be found around the world, some of which could have fallen through the cracks of sofa cushions or could be sitting at the bottom of a wishing well.

The study or collection of currencies is called Numismatics, but you don’t have to be an expert to learn about how rare coins can fetch a tidy sum. With over 200 historic coins in the U.S. valued over a million dollars, along with many others from around the world, this list is sure to make you tear up your furniture and rummage through your piggy bank.

The Royal Canadian Mint produced the $1 Million Gold Canadian Maple Leaf in 2007, which was the first million-dollar coin in the world. Measuring 20 inches in diameter and 1.2 inches thick, this coin was made from 220 pounds of 99.999% pure gold, conceived originally for the promotion of the mint’s new line of Gold Maple Leaf bullion coins, serving as a showpiece.

Only 5 specimens have been sold to investors all over the world, with the last one being sold for $4,020,000 at an auction in Vienna. One was stolen from Germany’s Bode Museum in 2017, however the original is still safely housed by the Royal Canadian Mint in Ottawa.

When the Royal Canadian Mint was asked why they made the world’s largest and purest gold bullion coin, their answer was “Because we can.” 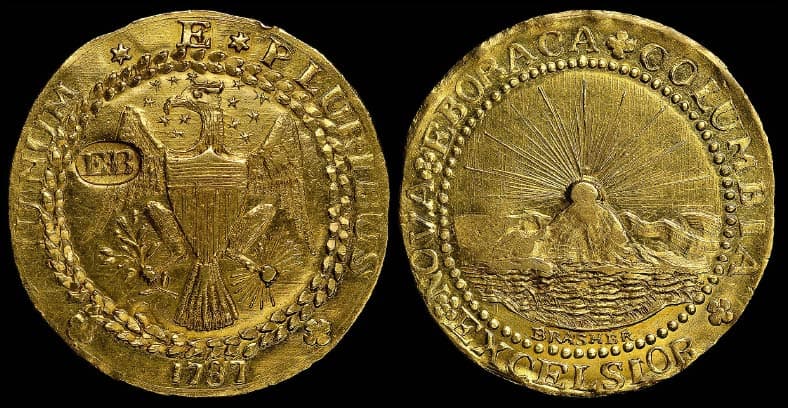 A little less expensive than the 1787 Brasher Doubloon with EB stamped on the Eagle’s breast, this rare coin was last sold at auction for more than $5 million and has the EB stamped on the Eagle’s wing. Ephraim Brasher was a private entrepreneur who was also a goldsmith and silversmith. He minted these coins in 1787 and many Numismatists and experts agree that it’s the most important coin in the World.

The design is close to those made by the Spanish at that time and now there are 6 known specimens that exist today, which are in $15 denominations. The current owner, Adam Crum, who is the VP of Monaco Rare Coins in Newport Beach, California advised that he was offered $6 million for this coin, but he turned the offer down.

Released in a $5 denomination, the 1822 Half Eagle was initially struck in nearly 18,000 pieces, although only 3 known specimens are in existence today, 2 of which are housed in the Smithsonian Institute. The other one is privately owned and some say that it could fetch $10 million if offered for sale.

The 1822 Half Eagle is also called the 1822 Capped Bust Gold $5 Half Eagle and its rarity and fame make it the one coin that most collectors lust after, to complete their collection of U.S. coinage. P. Scott Rubin, an expert in the field of coins, estimates that if it were to come into the market today, that this coin could fetch upwards of 10 million dollars.

There are only 3 known specimens of the 1343 Edward III Florin known to be in existence today, which was valued at 6 shillings when it was first minted over 670 years ago. One of the oldest and rarest coins, it’s known as a “Double Leopard” due to the depictions of 2 leopards on both sides of the coin, one where the King sits in between them.

2 of the 3 coins were discovered in the River Tyne in 1857 and the third coin was found in the South of England by a metal detecting enthusiast in 2006. This 1343 Edward III Florin is currently valued at $6.8 million, so any budding metal detectors out there might try their luck and take a trip to the South of England to see if they can score one for themselves.

The 1787 Brasher Doubloon #4 is a $15 coin, with the counter stamp of Ephraim Brasher’s initials on the wing, who was a silversmith and goldsmith from New York City. This particular specimen has the initials stamped on the breast of the Eagle, making it rarer.

Although the Government did not grant him permission to mint these coins, he went ahead anyway, starting with bronze and then minting some in 22 carat gold. Considered to be some of the rarest coins in the world, one specimen was sold in 2011, brokered by Blanchard and Company for an unknown seller to an unknown buyer at a Wall Street Investment firm for nearly $7.4 million. 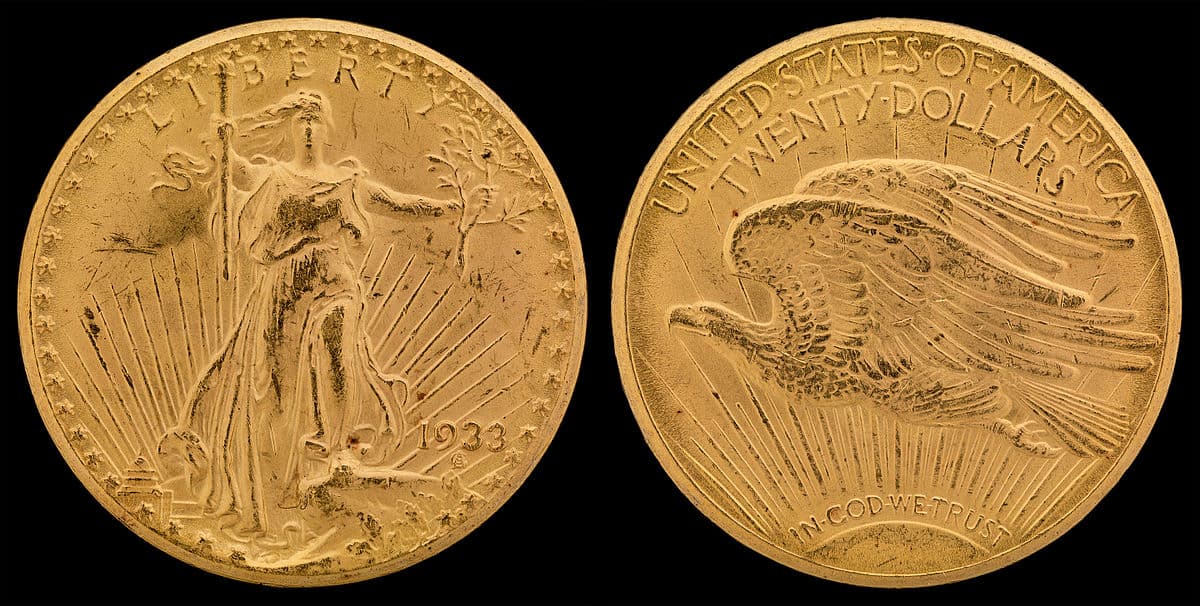 With the same design incorporated into the 1907 Saint Gaudens coin, which ran from 1907 to 1933, the 1933 Double Eagle is another $20 coin that was not released to the public and has a long, fascinating history. An executive order issued by President Roosevelt in 1933 recalled all gold coins from the public, with only a few escaping the recall.

One that ended up in the hands of King Farouk of Egypt was finally returned after a long battle and now these coins are illegal to own, although there are 13 known specimens in existence. In 2002, a 1933 Double Eagle was sold at a Southeby’s auction for $7,590,020. The extra $20 was to “monetize” the face value of the coin so it would become legal currency in order to be sold at auction.

Specified by enthusiasts and experts as the Saint with high relief, the 1907 Saint Gaudens is a $20 coin that had a limited minting. Only a few remain that are almost entirely untouched, with a Proof 69 Grade due to the double-thick, exceptionally high relief. The Smithsonian possesses 2 of these rare coins.

The design was inspired by famous American sculptor Augustus Saint-Gaudens. U.S. President Theodore Roosevelt commissioned the sculptor to fashion the stunning imagery that includes Liberty with rays of sunlight behind her. The 1907 Saint Gaudens coin can fetch upwards of $8.5 Million.

The United States Mint had only just been established when the 1794 Silver Dollar was first forged and they were then minted in small quantities, initially with 1,758 pieces struck. Only around 150 of these rare coins exist today and buyers should be aware that these must be certified by a reputable third-party coin authentication company, due to issues with counterfeiting.

The 1794 Flowing Hair Silver Dollar depicts Liberty with long, flowing hair on one side and was the first American dollar before paper dollars were made, starting the silver dollar tradition. This design only lasted until 1795, when the Draped Bust design replaced it. Specimen-66 sold for more than $10 million in 2013.

Is it for sale? No, only copper specimens for approximately $300,000
Year: 1877
Material Gold
Country/Currency U.S. Dollars
Estimated value: $15 Million

The Smithsonian Institute owns two different types of the 1877 Half Union, which is a denomination of $50, minted as a pattern or coin that was not meant to be released. Barely touched, this coin is Proof 67 and is very rare. Also known as J-1548, it’s considered to be the most well-recognized and important patterns in the U.S. Mint’s history.

Modified slightly from the $20 Double Eagle, the design was created by James B. Longacre and was minted from 1849 to 1907. The 2 coins housed at the Smithsonian are the only 2 known to be in existence and have been valued at $15 million each.

Is it for sale? No, only copper specimens for approximately $300,000
Year: 1849
Material Gold
Country/Currency U.S. Dollars
Estimated value: $20 Million 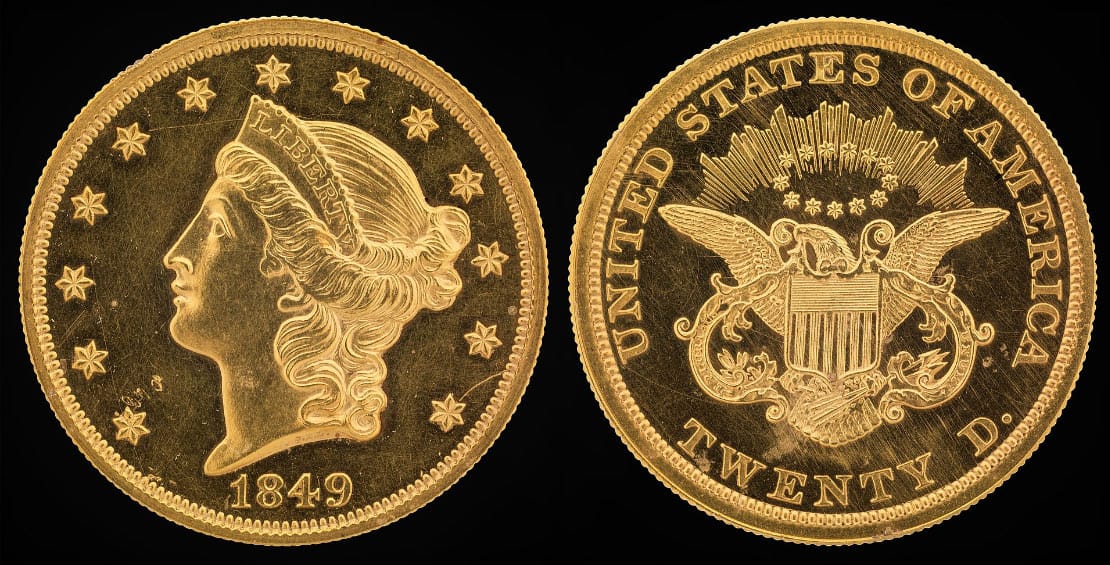 The California Gold Rush happened in 1849 when gold was discovered, leading to a frenzy and increased wealth for anyone lucky enough to find it. This was when two new denominations of American gold coins were minted and the $20 1849 Double Eagle was one of them.

There are many changes and fluctuations in the rare coins market, so if you’re an enthusiast, keep an eye on the news and do some research sometime in the future to see if any of these rare beauties come up for sale or auction. That is, if you have a few million dollars lying around collecting dust.

It’s understandable if your mind is racing after all that, trying to figure out how to get your hands on one of these rare coins. Most of us don’t have the kind of cash needed to purchase one of the rarest coins, but if you know where to look and have a metal detector handy, you might just discover one of these precious beauties. Plus, there are plenty of very old coins that aren’t too expensive at all – so anyone can get started in this hobby.

7 Rarest Stones in the World