Morgan dollars or Morgan silver dollars were the first silver dollars minted after the Coinage Act of 1873. The Morgan dollar became the standard $1 silver coin from 1878 to 1904, returning again in 1921 and much later as a 21st-century promotional item. The face on the front of the coin is a model, Anna Willess Williams, portraying Liberty, the mythical figure. Morgan refers to the designer, George T. Morgan, who engraved the coins at the United States Mint.

After the free coining of silver was abolished, silver could no longer be used as a base value for U.S. currency, meaning that the gold standard could go fully into effect and silver could only be minted in limited quantities by the U.S. Mint. The Morgan dollars produced during this tumultuous legal-financial period are now incredibly valuable collector’s items, with several years being of particular interest. 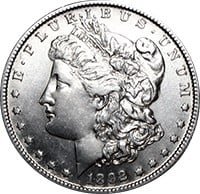 This 1892 Morgan Silver Dollar is marked by an “S” to show that it was minted in San Francisco. It consists of $20.2 worth of melted silver, though in certified MS+ condition by a coin grading company, this silver dollar is worth at least $130,000.

An 1892 Morgan Silver Dollar sold for $460,000 in 2009 at a Heritage Auction. However, this does not typically reflect the value of these coins. 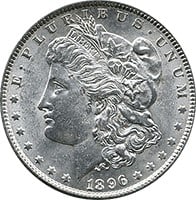 This Morgan dollar was minted in 1896 at the New Orleans mint, hence the mint mark of “O” below the wreath on the reverse side. MS+ condition coins are worth $140,000 at auction. The New Orleans mint produced over 427 million coins in total, including almost 5 million of these silver dollars.

The New Orleans mint was decommissioned during Reconstruction after the Civil War. In subsequent years, it has served as a U.S. Coast Guard storage facility, fallout shelter, and storage facility. 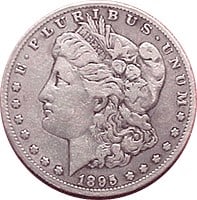 This Morgan Silver Dollar was minted in 1895 in New Orleans, Louisiana, which is why it’s marked with an “O.” In poor condition, this coin is worth over $320, which is more than the value of the silver. Therefore, these coins will always be worth more to collectors of coins than to silver miners, regardless of the coin’s condition.

When a coin is certified MS-65 by a major coin grading company, it is not only certified as being in top condition with few blemishes or scratches, but also for being uncirculated. MS-65 or “gem uncirculated” status is the second-highest grade possible behind MS-70 (“perfect uncirculated”). 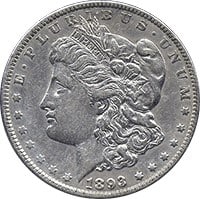 Only 300,000 1893 Morgan Silver Dollars were ever minted. They came out of New Orleans worth 1.00 USD in the twilight years of the Morgan dollars. In certified mint condition, this coin can auction for $180,000.

Like many of the coins from this era, the 1893 Morgan dollar is made from 90% silver and worth more even in poor condition than its weight in silver, which is about .773 ounces. 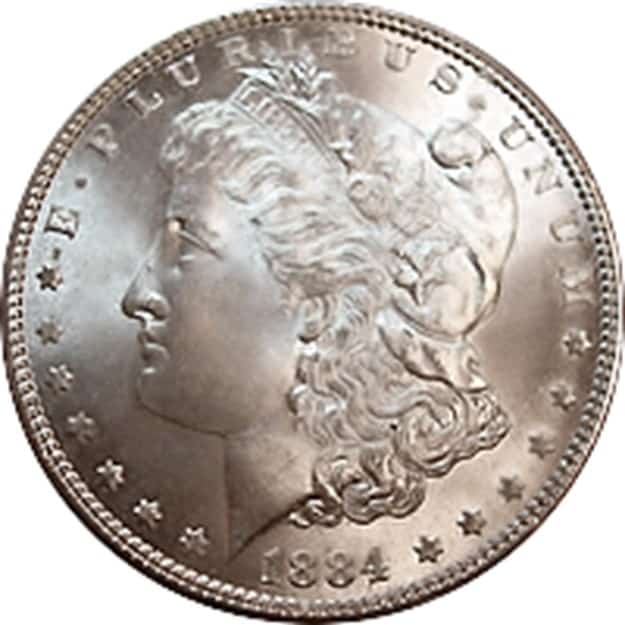 Over 3 million 1884 S Morgan Silver Dollars were produced, making it technically one of the more plentiful Morgan Silver Dollars on this list. Due to the slightly larger volume, the coins that command the top end of the price range of $250,000 are the ones certified MS-65, or uncirculated, by coin grading institutions.

This means that in reality, very few 1884 S Morgan Silver Dollars are bought, sold, or circulated to maintain their value, adding to their rarity.

The San Francisco branch of the US Mint was established to process the influx of gold during the California Gold Rush in 1854. Affectionally known as “The Granite Lady,” the building that minted the 1884 S Morgan Silver Dollars is one of only a few structures that survived the San Francisco earthquake in 1906. It was used as the city’s mint until a new one opened in 1937. 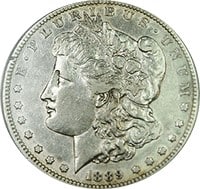 This 1889 CC Morgan Silver Dollar was minted in Carson City, Nevada, hence the CC mint mark. The value of poor or generic condition 1889 Morgan dollars is estimated at around $1,591. However, MS+ condition coins (certified mint state) can auction for upwards of $280,000.

Only 350,000 of these coins were ever produced. This could be why a particularly pristine one can sell for even more. According to Heritage Auction records, one of the 1889 Morgan dollars sold in 2009 for $500,000.

The Carson City Mint, distinguished by the mint mark, “CC,” was opened in 1870. Despite being created in 1863, at the peak of the silver boom due to the discovery of the Comstock Lode, its opening was delayed. Although its minting operations closed in 1893, in 1895 the Carson City Mint’s building served as the gold and silver U.S. Assay Office, where precious metals are tested for purity and value. Due to its short operation, coins minted here are generally highly valued. 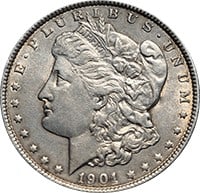 Certified mint condition 1901 Morgan Silver Dollars can sell at auction for $425,500, making them among the most prized such coins in the world. They were minted in Philadelphia, which could use a mint mark of “P” or no mark at all.

Many of these coins sell for around $3,000. The truly valuable ones feature minting errors. For instance, Double Die Reverse errors can increase the value. It was a P Morgan certified MS-65 or “uncirculated gem” that sold for the full value listed here.

The Philadelphia Mint was established to create a continental national mint after the Constitution was ratified. This led to the Coinage Act of 1792 and the creation of the U.S. Mint. You have to remember that Philadelphia at this time was the nation’s capital. Logically, it housed the first mint. The same Coinage Act also established the dollar unit and decimal coinage system that we still use today. 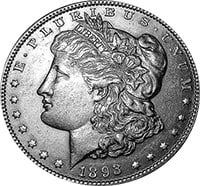 The rarest Morgan dollar is the 1893 S Morgan Silver Dollar. From the mint mark (“S”), we know it was minted in San Francisco as a response to the California Gold Rush. In even average condition, this coin can sell for $3,000.

At a Stacks Auction in 2001, one of these coins sold for $414,000. Since there were only 100,000 of these coins ever minted, their rarity speaks for itself. On average, the value of an MS-65 condition 1893 Morgan dollar is around $300,000. For even better conditions, these coins are known to ascend to their full value of over half a million dollars, but only for coins that were never circulated and remain in the rarest condition.

Not only is this coin rare due to its limited minting, but many of these coins were melted down over the years. Of particular note is the Pittman Act of 1918, which cost more than 270 million Morgan silver dollars their lives when they were ordered to be melted down and reforged into solid silver. This was due to an imminent banking collapse in Great Britain owing to the country’s silver problem. Britain, which was paying for war supplies and other goods with paper certificates, may not have had the silver reserves to stay afloat without help from America.

Some historians believe that by preventing a banking collapse in Britain with these silver coins, America may have saved the Allies’ victory in World War I.

Few iconic currencies read America like the Morgan silver dollar, which was required to have a depiction of the mythical Liberty emblazoned on the front, with an eagle on the back. These coins were only minted for a few decades at the end of the 1800s in select minting branches around the country, notated by unique mint marks.

Due to this scarcity and subsequent war efforts that claimed much of the nation’s excess silver stores, the right minting on a Morgan dollar can make it worth more than 500,000 times what it was when it was forged. Consider this as your collector’s guide to these exquisitely rare pieces of American history.