8 Most Expensive & Valuable Coins in the World

Before currency took off across the globe, bartering was one of the main ways people gathered and exchanged valuable goods. Eventually, though, early forms of money joined the scene — opening up a new way to buy and sell items.

The world’s earliest currencies often relied on metal, partially because it’s durable enough to withstand changing hands over the course of dozens of years. Egypt adopted a system of gold rings as money around the 4th millennium BC before adopting a more recognizable coin system in the late 4th century AD.

In slightly more modern history, the British pound was adopted about 1,200 years ago and is still in use today, making it the oldest currency actively used in the modern world.

Today, coins are typically used for everyday purchases — but some are collector’s items. These coins are usually very rare and old, making them extremely expensive.

Here are the top eight most expensive coins in the world.

This coin sold for about $625,000 USD, making it the eighth-most expensive coin in the world. The rare find is one of just three known examples.

Although it officially sold for more than half a million dollars in 2006, more recent estimates say the Edward III 1343 Florin is worth closer to $5 million.

The coin itself depicts King Edward III seated on his throne. The coin also shows the King holding a sword and scepter as two crowned leopards’ heads sit on either side of him.

Two examples of this coin were found by school children playing along a river in 1857. Those coins are now in possession of the British Museum in London. 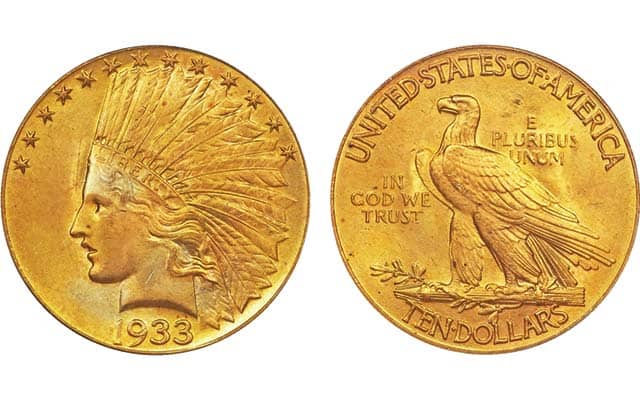 Interestingly, 1933 was the last year these coins were minted. More than 300,000 examples were created that year, but most were melted down after President Roosevelt banned the private ownership of many forms of gold on April 5, 1933. According to historians, Roosevelt’s decision to ban gold was part of efforts to stabilize the U.S. economy.

Since most examples of this coin were melted down in the 1930s, it’s unclear exactly how many still exist. However, a discovery in the 1950s revealed a collection of about 30 1933 Indian Head Gold Eagle coins somewhere along the east coast. Altogether, experts estimate somewhere between three and four dozen 1933 Indian Head Gold Eagle coins remain.

The Million Dollar Coin is the only coin on this list that was created in the 21st century. The incredibly expensive creation was made by the government of Canada as a promotional tool for the Canadian Mint’s line of collectible gold coins, but wealthy collectors quickly came forward and requested their own copy. As a result, four additional coins were made — each weighing approximately 200 pounds.

This coin was officially declared the world’s largest gold coin by Guinness World Records in October 2007. The coin was also the first in the world to be minted with an official value of $1 million.

Estimated Value: $3.29 million
Mint Year: Unknown
Origin: The United States
Interesting Fact: Despite being stamped with “1804,” this coin was likely made in the 1830s 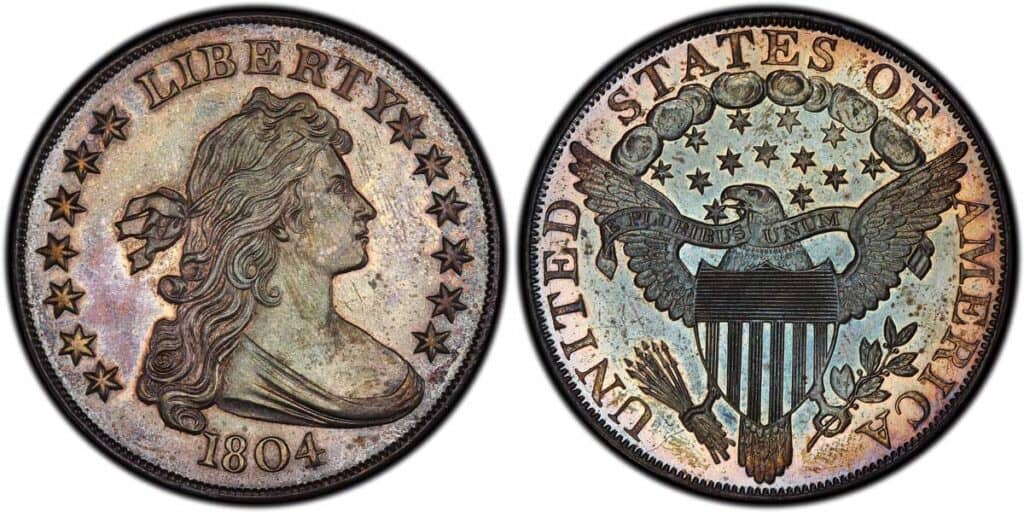 This coin’s name is a little misleading. Despite being stamped with 1804, the coin was probably created sometime in the 1830s. In fact, no silver dollars were minted in 1804.

So why is it marked 1804? The exact story is unknown, but researchers say these coins were probably minted made by the United States to be given as gifts to foreign government officials during a State Department mission to Asia and the Far East.

Interestingly, a small batch of coins commemorating the 1804 silver dollar was created several decades later for coin collectors. That’s where class titles come into play. Class I 1804 silver dollars are the original batch, while class II come from the commemorative set.

There are just eight known examples of class I 1804 silver dollars. 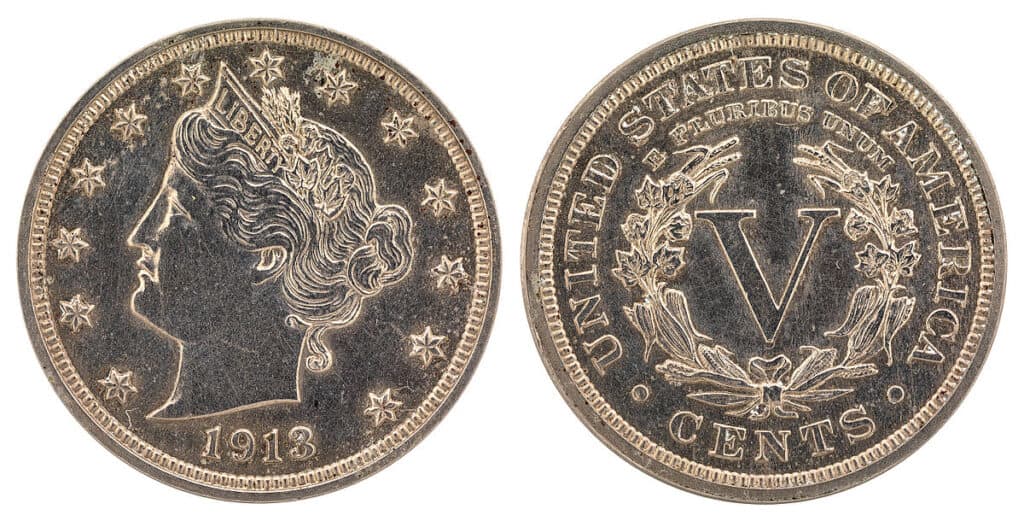 The United States is no stranger to rare and expensive coins, but this Liberty Head nickel raises the bar. The incredible coin is one of just five known examples — and it sold for $4.5 million in 2018.

Like other rare coins, the 1913 Liberty Head nickel is mostly owned by non-private groups (eg. museums). However, this example was sold to a private owner after the family of Dr. William Morton-Smith put it up for auction. Dr. Morton-Smith was a life-long coin collector who reportedly started his collection after finding a collection of rare coins in a desk’s hidden compartment.

You can see an example of this coin at the Smithsonian National Museum of American History in Washington D.C.

Estimated Value: $4.78 million
Mint Year: 723 AD
Origin: The Kingdom of Saudi Arabia
Interesting Fact: This is the oldest Islamic coin to name the exact origin of its gold 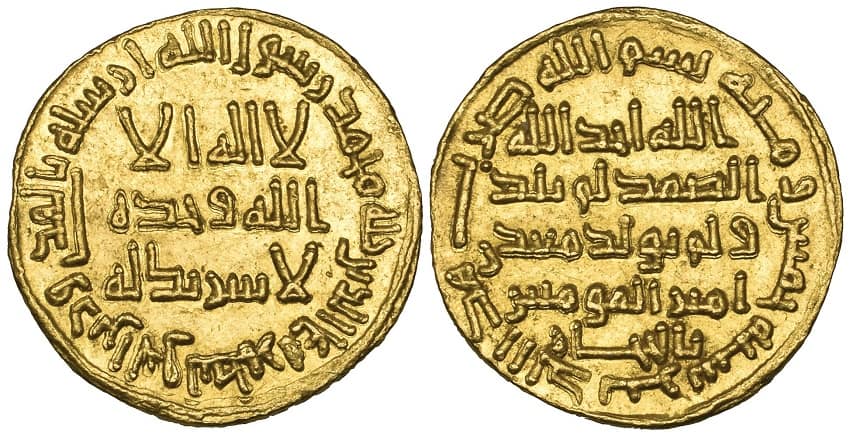 The Umayyad Gold Dinar comes from the Kingdom of Saudi Arabia in the year 723 AD. That makes it about 1,300 years old.

As such an old coin, it’s no surprise that the Umayyad Gold Dinar has a steep price tag. The coin sold for nearly $5 million at an auction in London, making it the third most expensive coin in the world.

Amazingly, experts say only 11 other coins of this kind are known to exist. This gold dinar is also the oldest known Islamic coin to name the exact origin of its gold within the Kingdom of Saudi Arabia. While other coins from the region name their origin or quote religious texts, this coin specifies the mine from which its gold body was sourced. 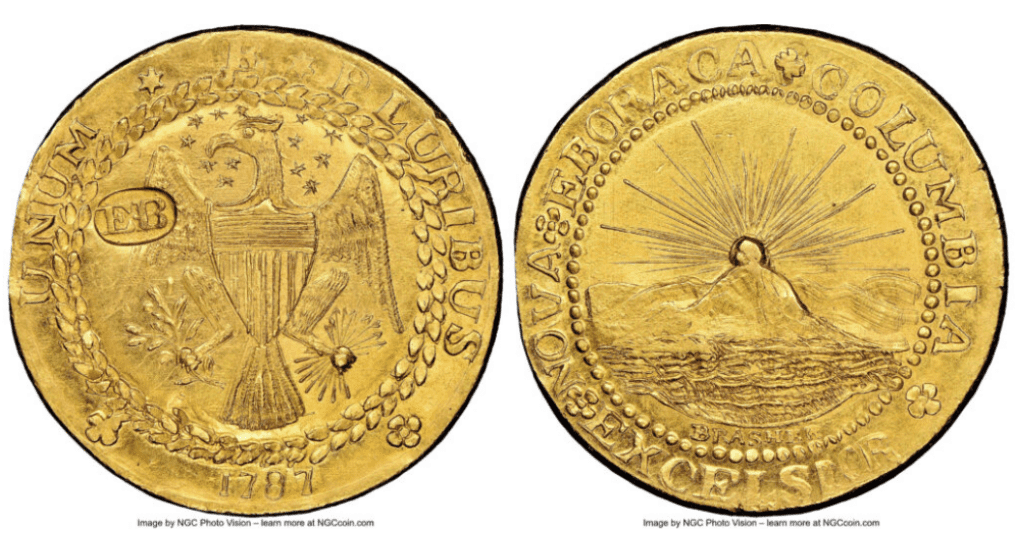 In January 2021, an auction house in the U.S. sold a rare Brasher Doubloon for nearly $10 million. The unique item was created by Ephraim Brasher, a well-known jeweler from New York. The coin was produced a few years before the U.S. created an official Mint in 1792, so Brasher’s creation wasn’t considered legal tender in the same way we understand money today. However, it was made of gold — so it was worth an estimated $15 at the time of its creation.

Interestingly, Ephraim Brasher was George Washington’s neighbor for about a year. That doesn’t directly contribute to the coin’s actual value, but collectors seem to appreciate the coin’s connection to America’s first president.

There are just seven known examples of Brasher Doubloons. 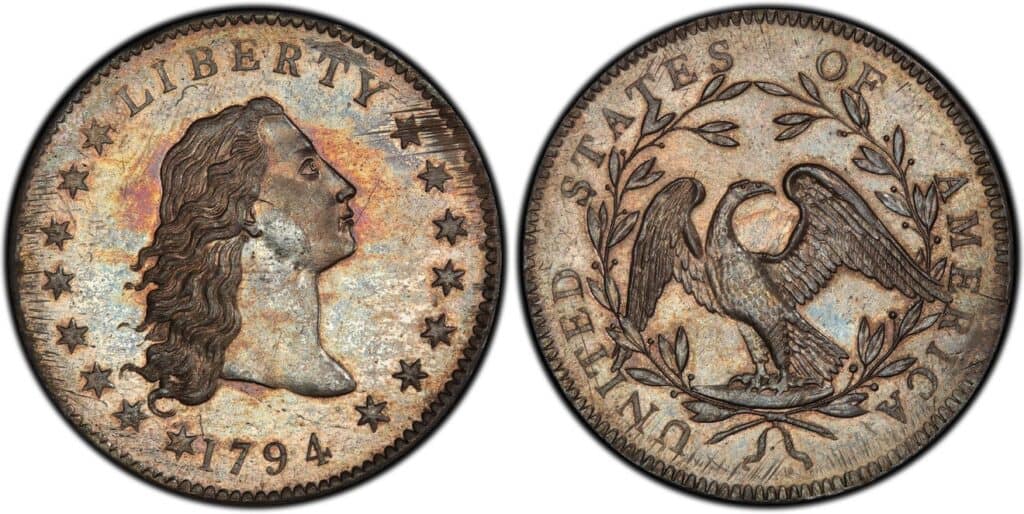 The 1794 U.S. Silver Dollar is the most expensive coin in the world.

This ultra-rare coin is believed to be the very first silver dollar minted by the United States. The rare find was created less than 20 years after the American colonies declared independence from Britain, making the 1794 U.S. silver dollar a highly valuable historic item.

“This coin is the Holy Grail of all dollars,” said coin expert Laura Sperber — and it’s not hard to see why. A meager 1,758 silver dollars were minted in 1794 and only 130 of those remain today. Amazingly, this particular example is thought to be the very first of that original batch.

Beyond its age and historical significance, this coin earned its price thanks to its above-average condition. According to reports, the coin landed a solid 66 on a 70-point scale analyzing its wear and appearance.

In the end, this coin is worth a whopping $10 million.

Prior to the sale of this 1794 U.S. silver dollar, another example in slightly worse condition sold for an impressive $288,000.

8 of the Most Expensive Weddings in History