Leopard geckos make great pets. They are the most popular pet lizards around the world. Leopard Geckos are docile in nature and can be domesticated easily. They are native to Afghanistan, Pakistan, Western Nepal, North-west India, and parts of Iran.

Leopard Geckos have a wide variety of breeds, mostly created by selective breeding. They are more commonly known as morphs. Various morphs can differ from each other in size, color, pattern, eye color, and pigment.

Currently, more than 150 morphs exist for the leopard gecko, and the list is growing. Breeders are always on the lookout for new colors and patterns, and they keep on experimenting to achieve them.

Here we list 8 of the rarest Leopard Gecko Morphs that can be found in today’s world. However, the availability of a particular morph can change over time due to various factors, including their popularity and demand. Thus, what is considered rare today, may become more readily available the next season. 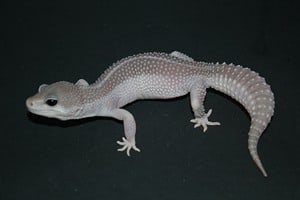 Mack Snow morph was first bred by John and Amy Mack from Reptiles by Mack. Murphy Patternless was produced by Pat Murphy in 1991. Shelly from Lizard Lair crossed these two morphs to create the Super Snow Patternless morph.

This morph has a grey or white body and solid white legs and feet. They also have a solid white stripe running down their back. The color of their eyes is solid black.

A Super Snow Patternless Leopard Gecko can cost you up to $500. The less pattern they have, the more expensive they are.

Leopard Geckos eat their shredded skin. It helps them keep their predators away because, in this way, the predators cannot detect them by scent markers. 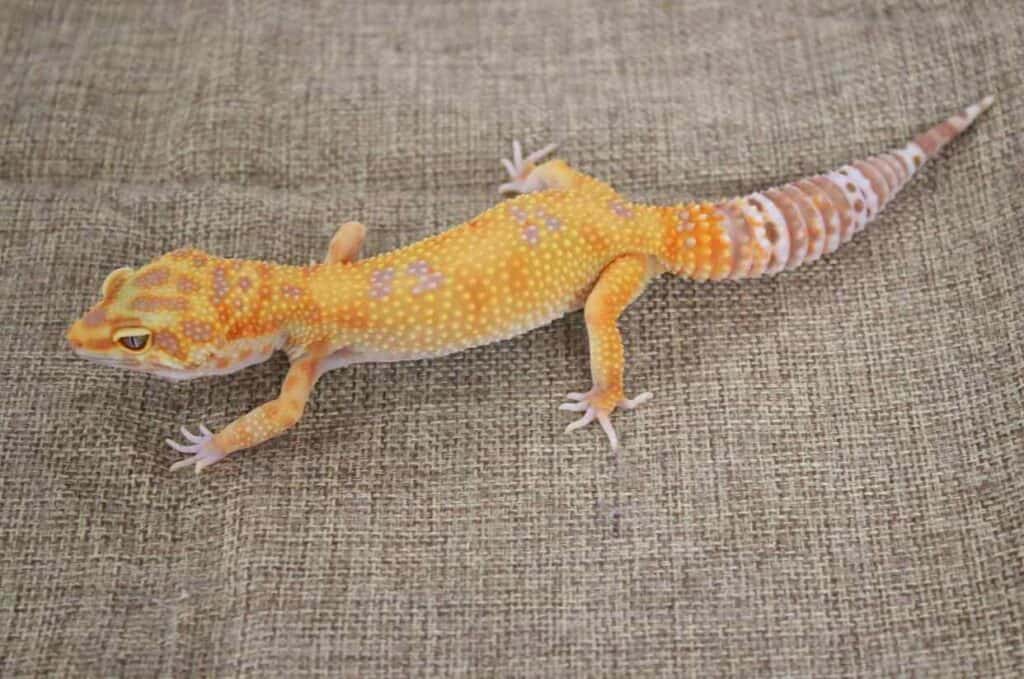 Nieve Tangerine Leopard Gecko morph was first produced by Davis Nieves sometime in the mid-90s. He was one of the pioneers of the tangerine leopard gecko morphs.

This morph has a very distinctive look. The color of the Neive Tangerine Leopard Gecko’s body is tangerine, and its feet are pinkish white. The skin features various shades of yellow and orange. The pinkish spots on their back appear to be larger than all other tangerine leopard geckos. They also have fewer spots on their body. 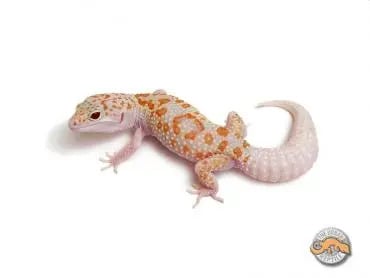 Dreamsicle Leopard Gecko was first presented to the world on January 15, 2008. It was produced by A&M Geckos. The morph is a combination of the Enigma trait, Mack Snow morph, and RAPTOR morph, and the breeding process is very complex.

When born, the hatchling appears almost translucent. However, a mature gecko exhibits white bodies with reduced yellow and orange markings. The tail is also plain white without any spots. Besides, these lizards have a pair of distinctive red eyes. 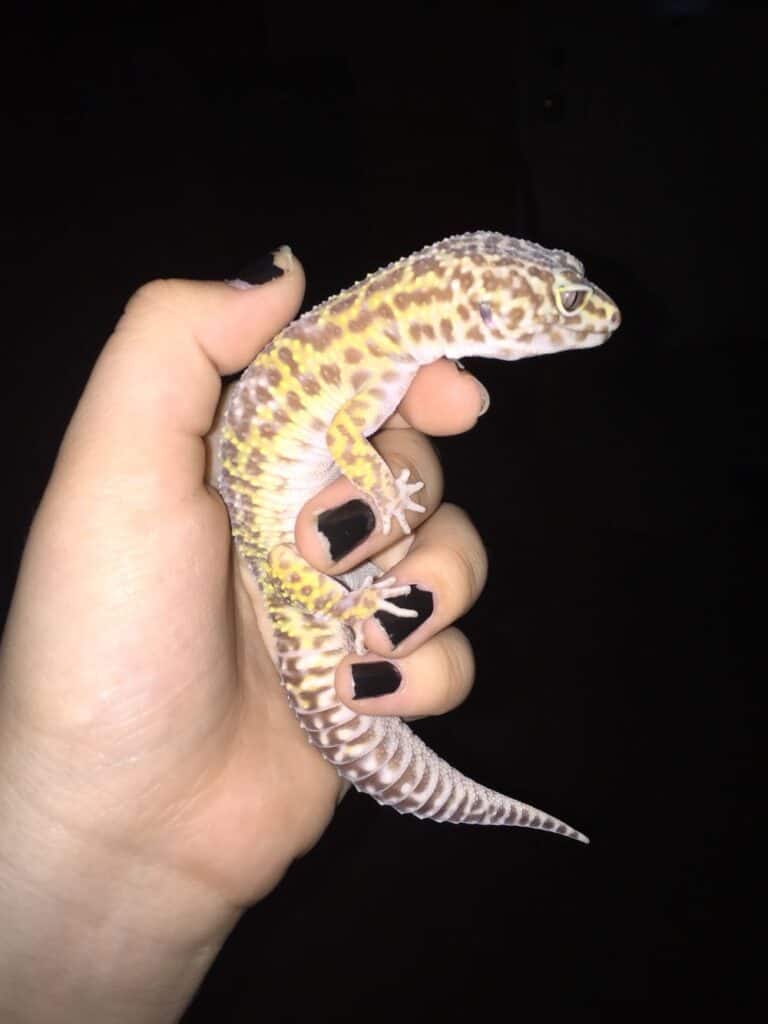 All Albino Geckos lack melanin, and thus they do not have dark black coloring on their body. They also have light-colored eyes.

Currently, there are three recognized Albino morphs of Leopard Geckos, Rainwater, Tremper, and Bell. Bell Albino, discovered by Mark Bell, is the newest among these three.

Most lizards do not have eyelids. However, Leopard Geckos have eyelids, and they can blink.

Rarity: Extremely rare
Appearance: Yellow and black coloration on the body, the head features green/yellow and back headstamp
First produced by: Gourmet Rodent 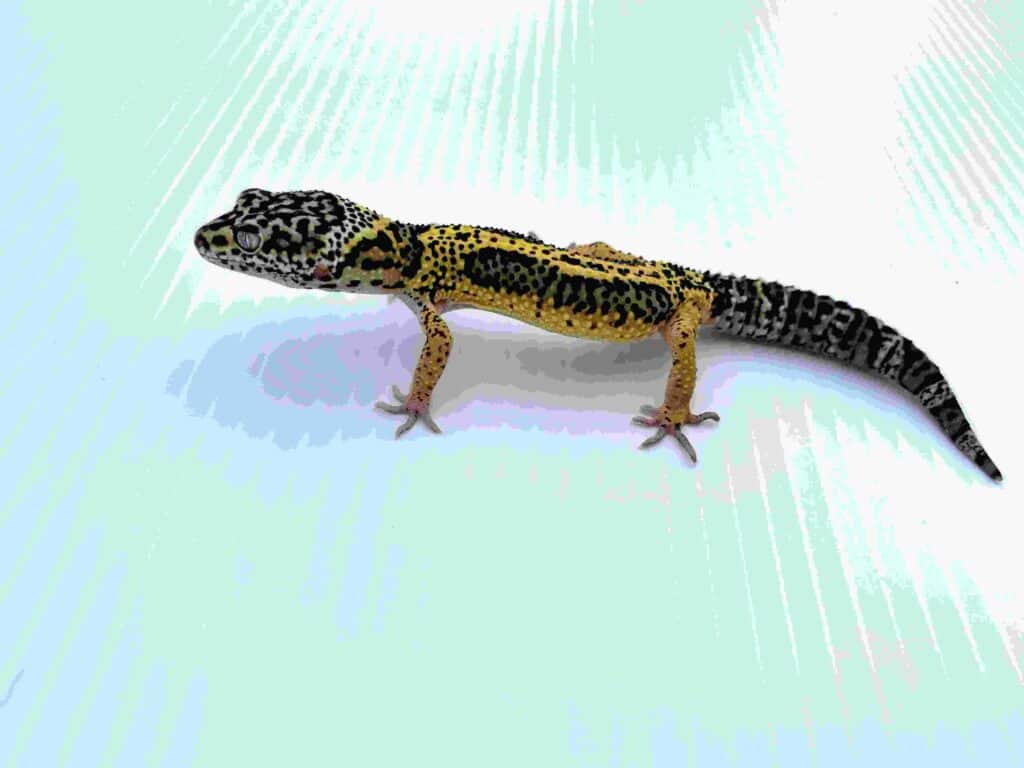 Lemon Frost morph was first produced by Gourmet Rodent during 2012-13. It made its first public appearance in 2015 at an auction. Lemon Frost is an incomplete dominant mutation that is prone to develop cancer.

At birth, the body of a Lemon Frost Leopard Geck shows yellow and black coloration, and spots appear as it ages. Tumors may also appear on their body as they age.

The head of a Lemon Frost features a headstamp with green/ yellow and black patterns. With age, the skin on the head also develops some spots. Some Lemon Frosts may have a deformed head. The tail is lighter in color than the rest of the body and has light patterns.

It is found that the gene SPINT1 present in the Lemon Frost produces iridophores in an excessive quantity. It gives them a lighter color but also increases the risk of developing skin cancer. 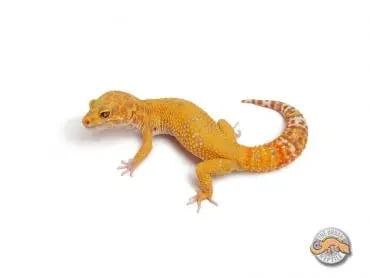 The Marble Eye Leopard Gecko was accidentally found by expert breeder Matt Baronak. While he was feeding the leftover Geckos that were not sold at the White Plains show in New York, he noticed something unusual about the eyes of a Gecko.

First, the eyes appear to be redder than usual. However, when he took a closer look, he found that the eye looked three-dimensional, something like a kaleidoscope.

He checked the other Geckos and found two others with the same feature. Matt immediately called A&M Geckos, who supplied these three Geckos. The parents were still with the A&M Geckos, and Matt started experimenting with them.

Matt could successfully breed this rare morph, but he believes more research is needed to be done to produce this morph in greater numbers.

Initially, it was thought that the trait just affects the eyes. However, further research showed that it manipulates body color as well. 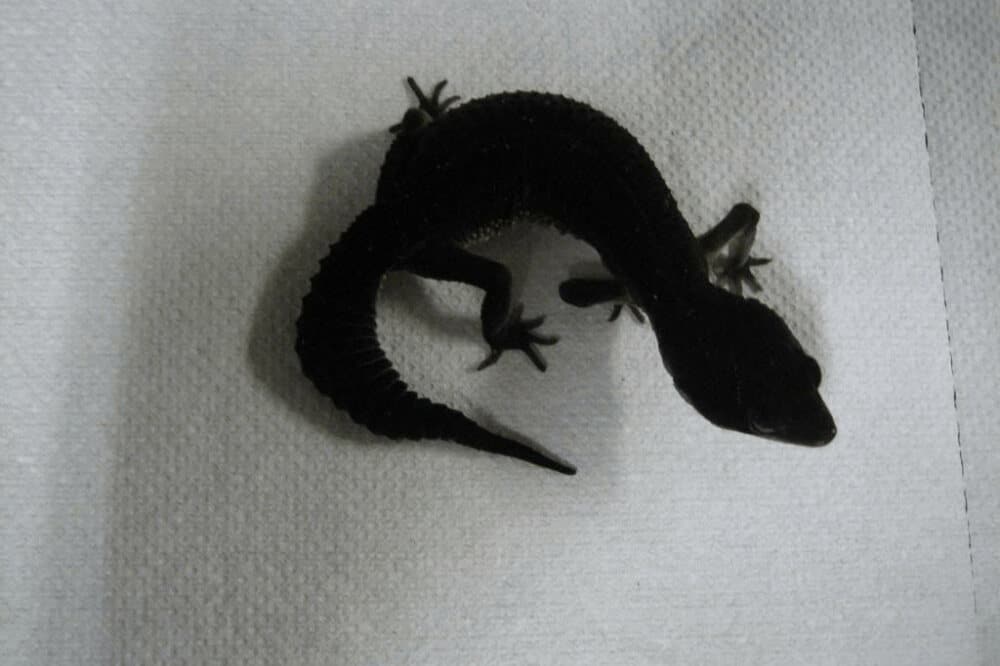 Black Pearl Leopard is an extremely rare morph that is still in the development stages. Two Europe-based breeders, Living Art Geckos and Asko Kampinga, are engaged in the research.

Black Pearl Leopard was first seen at a zoo in the Netherlands that received them from the wilderness. Later, Living Art Geckos and Asko Kampinga received a few Black Pearls.

A Black Pearl Leopard Gecko is pure black without the presence of any other color. The skin appears silky and smooth, and the color gets richer as the animal ages.

Two genetic traits need to come out to produce a Black Pearl coloration. They are hypermelanism, and black or dark coloration, both recessive. Besides, it is also very difficult to find parents with these traits. 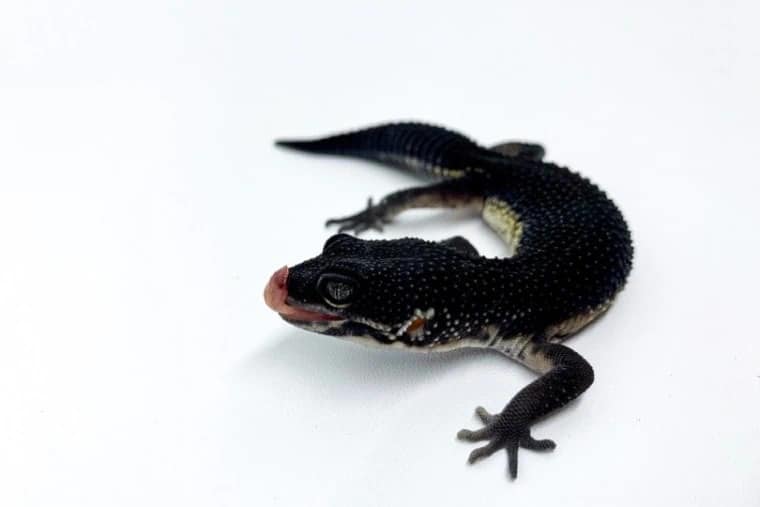 The Black Night is the rarest morph of the Leopard Geckos. It is very similar to the Black Pearl morph but has more yellow along its belly.

This morph is very popular among breeders and pet owners for its distinguishable black color. They are hypermelanistic, which is a recessive trait.

Leopard Geckos are not good climbers because they lack the sticky pads most lizard species have. Instead, they have tiny claws on their feet.